Re-posting with new link for pricing of new shares.

These CLR wells in the Long Creek Unit are now showing five days of production in September, 2021.

If it's a slow day tomorrow, I will post production for September, 2021, most recent data available, but this is pretty much what each well looks like: 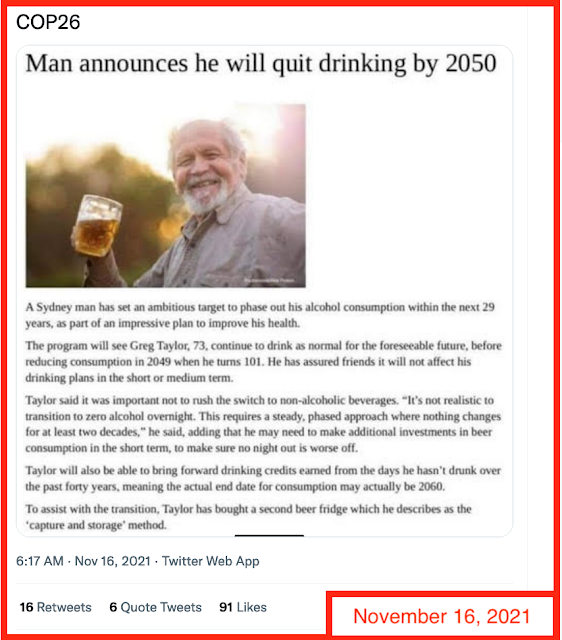 WIth One-Third The Number Of Active Rigs, North Dakota Almost Edges Out New Mexico For Second Place -- The Bakken? It's Pretty Special -- November 17, 2021

Disclaimer: I remain inappropriately exuberant about the Bakken. Past results to not guarantee future results. Your experience may be different.

From The Williston Herald: North Dakota production rises a half percent, but is still behind New Mexico by just a nose. Link here.

North Dakota added another rig this month, along with a half percent bump in production to 1.113 million barrels per day. That wasn’t enough to bump the state out of third place in the nation’s top oil producing shale plays, but it did bring it very close to New Mexico’s 1.12 million barrels per day in the Permian.

North Dakota Department of Mineral Resources Director Lynn Helms said North Dakota doesn’t actually have to match New Mexico’s rig count of 81 to beat New Mexico production. A Bakken rig produces almost twice as much as rigs in the Permian, based on data from the Energy Information Administration, the agency that tracks national energy data.

“We just have to get to 50 and then we’ll start to gain on them,” Helms said. So we’ll just keep track of that and we’ll watch that number.”

Well completions for the month were one above the state’s revenue forecast at 41, and prices were 32 percent above forecast.

Note explanation of this video.

Then He Kissed Me, The Crystals
Posted by Bruce Oksol at 7:55 PM 2 comments:

Note: to the best of my knowledge, the NDIC is still not updating scout tickets and the map, and possibly other data. It is possible that some of the permits that have been canceled and that data not yet reflected on the blog or at the NDIC site. But I wouldn't know. If this information is important to you may have to contact the operator. 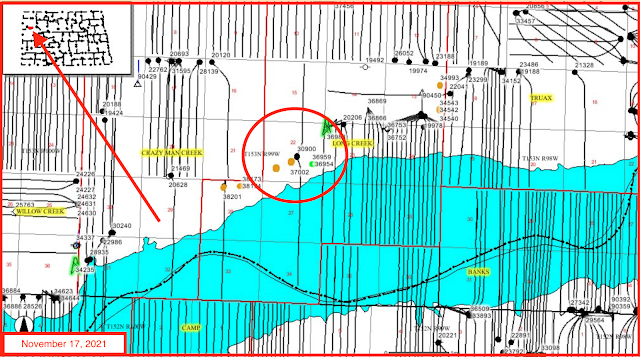 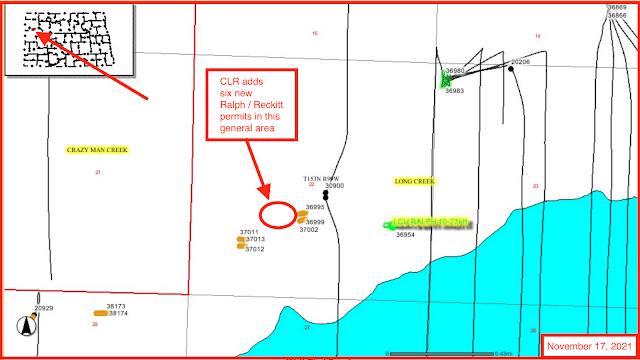 Thirty-three active rigs per NDIC's daily activity report. I have not gone through the list but it's not uncommon for one rig or more to show up more than once.

BREAKING: on a down day for the market, AAPL just popped.

Shot across the bow: Amazon will no longer accept the VISA credit card in the UK. 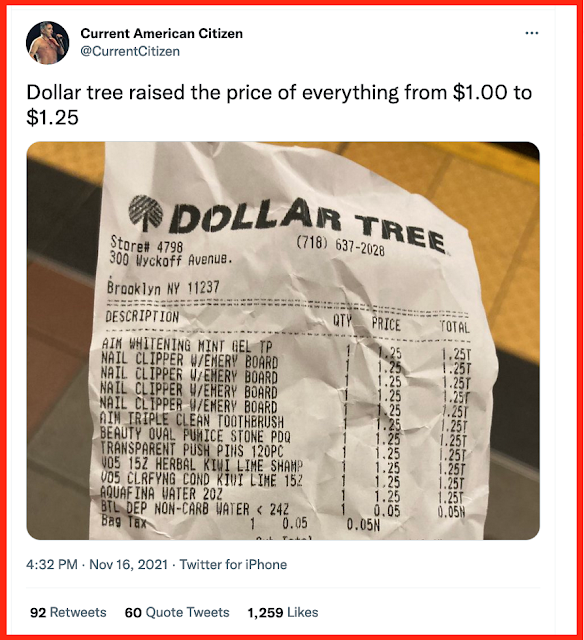 One day Algeria stops the gas pipeline via Morocco into Spain. Another day Germany say it needs more time to approve Nord Stream 2 gas pipeline. And another Belarus stops temporarily the Druzhba oil pipeline from Russia into Europe. All spontaneous; no politics involved, mind you.

Amazon: no one has this set in stock -- not even Lego -- but Amazon does. Link here.

Target blinks: will mimic Walmart -- will absorb costs; will not pass them on to consumers. Huge.

Brandon is using two "gasoline spreads" to try to make his case:

And, Brandon, of course, to keep it simple, combines it into one spread:

Today, his speech writers noted that the spread between the cost of unfinished gasoline and the price at the pump is widening. LOL.

Explaining the jargon: the EIA at this link.

This is not rocket science.

Let's tackle just one data point: getting from finished gasoline to gasoline at the pump.

What does that require.

Well, let's see what the EIA says at the linked article:

Blending terminals are more numerous and widely dispersed than petroleum refineries, and they have equipment for filling tanker trucks that transport finished motor gasoline to retail outlets.

Yup, there it is. Finished gasoline has to be trucked to the retail service station. What do we have right now? Yup, that's right. A trucking and a trucker shortage.

This shouldn't be too hard to explain, even to an octagenarian. Perhaps two PowerPoint slides.

But there's a much, much bigger story here.

The fact that Brandon is dithering on this whole issue, taking no action except asking for an investigation, tells me one of two things is going on, and most likely it's a combination of the two.

First: he has no options to affect the price of gasoline in the near term (the holiday season).

Second: the Brandon administration has two competing factions. On the one hand, the ideologists love this, want the price of gasoline to spike, driving Americans to EVs and get off fossil fuels (not gonna happen); and, the realists who want Brandon to take real action, like opening the SPR, to bring down prices, even if it's only temporary.

The fact that he is trying to bring down the price of gasoline with speeches and not taking tangible actions suggests he is dithering, unable to accept the recommendations of either of the factions in his White House.

Get out the popcorn.

Later, November 18, 2021, link here: the Reuters analyst questions who is advising Brandon ... to me it looks like debate between two parties in the White House --

Why is China so interested in a corn milling program in a remote town in a remote state known for wheat and oil? But not corn.

UND EERC: link here. A world-class energy research center. Where oil and technology came together to become part of the US shale revolution, perhaps one of the most amazing energy revolutions ever. China: looking for shale technology.

UND Aerospace: link here. Where Saudi princes come to learn to fly. The second-largest degree-granting college at UND, the John D. Odegard School of Aerospace Sciences operates one of the largest fleets of civilian aircraft in North America.

Drone research:  US DOT selects North Dakota DOT for unmanned aircraft BEYOND integration pilot program. Link here.  That link is just the beginning. Click on "drones" in search at the milliondollarwayblog. You can start here if you want. If one is seriously interested in drones, one thinks Grand Forks, ND.

Bottom line: UND / Grand Forks is home to a huge drone program, a huge aeronautics program, and a huge connection to the US space program as well as the entire history of the US shale revolution, open to the public.

Now for the good stuff.

Grand Forks AFB: it used to be home for the B-52 Stratofortress bomber, part of the nation's nuclear triad.

PAVE PAWS: does anyone remember this? Star Wars? Ronald Reagan? Reagan made the SDI announcement in 1983. Pave Paws developed in 1980. See wiki, does this get your attention?

With the first solid-state phased array deployed, the system at the perimeter of the contiguous United States used a pair of Raytheon AN/FPS-115 radar sets at each site[3] (two sites in 1980, then two more used 1987–95) as part of the United States Space Surveillance Network.

One system was sold to Taiwan and is still in service. -- yes, in the lede paragraph of the wiki entry.

So, an operating system to ""detect and characterize a sea-launched ballistic missile attack against the United States" and still in service was sold to Taiwan.

Okay, ask me again, why is China so interested in a corn milling program in a remote town in a remote state known for wheat and oil?

A huge thank you to a reader who brought this to my attention. I would love to take credit for this but I have to give all the credit to my readers.

Background: link here.  This is a huge economic story for North Dakota.

This is a corn milling story. Corn.

Quick: what state is know for corn? Sure, North Dakota has a lot of corn, but when you get right down to it, if one is interested in corn, one's first thought is Iowa and the states that border Iowa. Not North Dakota.

But if, for some reason, the state's incentives for bringing a Chinese company to North Dakota, why would China choose Grand Forks, not Fargo? For those on the east coast, Fargo is to NYC as Grand Forks is to Rahway, NJ.

The deal was likely done by the most internationally savvy group of businessmen and politicians the United States has, including the North Dakota Tax Commissioner (more on him later, perhaps).

So, anyway, that as a bit of background, what does the Grand Forks area have that would interest China over all those other areas in corn country, USA?

Buried? Why was this not the headline? Most recent filing, we learn what Warren Buffett bought, sold. Buried in the story: "...ramped up a bet on Chevron Corp., boosting that 24% to an investment valued at $2.91 billion at the end of the quarter."

EU natgas situation becomes ugly in December. Germany's suspension of Nord Stream II certification is a reaction, not the cause. The Russians were unable to deliver. Cold weather hits Europe next week. Link here.

Adios, Staples. Crypto.com Arena will be home of the LA Lakers this season. Rolls right off the tongue. Naming rights: $700 million. 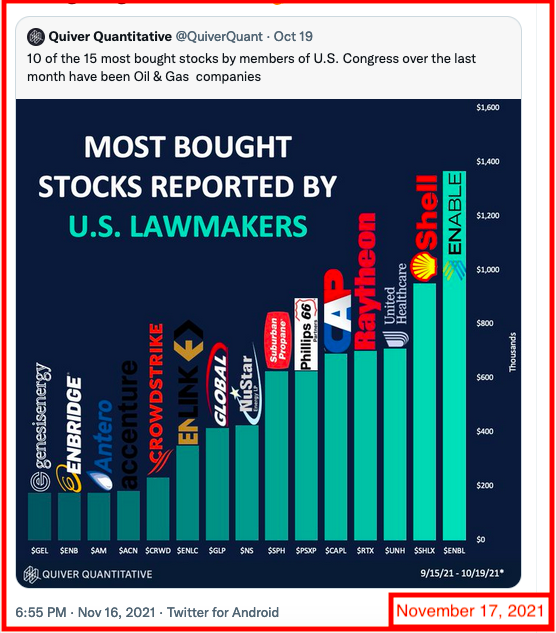 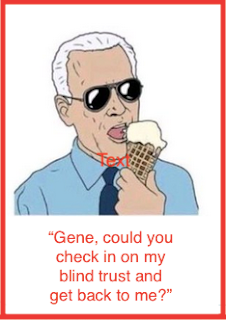 CRK: closes Bakken divestiture. To realize a $160 million loss. Part of proceeds to fund acquisition of 23K acres in Haynesville area of ETX for $36 million. About $1,600 / acre in the Haynesville. Link here.

The November 4 decision by the Organization of the Petroleum Exporting Countries and its collaborators — collectively known as OPEC+ –– to stay the course on crude oil production surprised few and disappointed many. Officials from leading oil-consuming nations, including the U.S., Japan and India, want the group to relax its production restraint by more than the scheduled 400 Mb/d in December. They see extra crude supply as an antidote for high prices that have been hampering recovery from the global economic slump caused by the COVID-19 pandemic.

But OPEC+ leaders made clear that they’re in no mood to accelerate their phase-out of production cuts. They know the market pressures now elevating crude prices won’t last forever and can change unexpectedly. They also face internal strains that might weaken the quota discipline that has kept the group’s supply management intact, despite the occasional upset, for nearly five years.

One of those strains is the number of OPEC+ participants already producing as much crude as they can while falling short of existing ceilings — a number that grows as the ceilings rise. Today’s RBN blog looks at oil-market expectations underlying OPEC+ members’ cautious approach and at the growing divide among those unable to keep up with output targets and the relatively few but volumetrically overpowering counterparts with capacity to spare.