I was wondering when this day would come. In NASCAR, most of her races:
finishing between 12th and 25th; or,
DNF
Having said that, she has done as well as many of the current NASCAR drivers.

From Fox News: Danica Patrica is done at Stewart-Haas racing after this year (2017); NASCAR future is in question.


Patrick posted a statement on her Facebook page Tuesday saying her time with Stewart-Haas "had come to an end" due to a new sponsorship arrangement for the team next season.

The statement came shortly after Smithfield Foods said it will leave Richard Petty Motorsports to become a primary sponsor at Stewart-Haas next year. The news is a blow to RPM, but it also forced changes at Stewart-Haas, which has struggled with sponsorship for three of its four cars, including the No. 10 driven by Patrick.

Tech is up nearly 30 percent since the election, and has also added $1.019 trillion in value to the S&P in the time period, the most out of any sector. 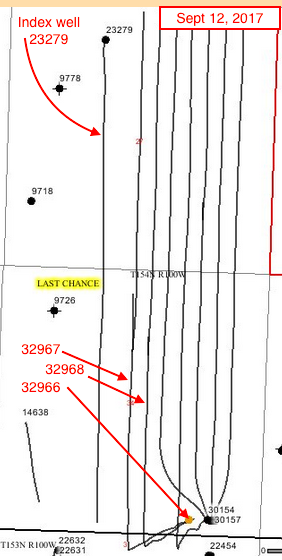 The wells: were fracked in January/February, 2017, time frame:
The index well:

A New Operator In The Bakken; Will Target The Lodgepole Down By Dickinson; Major Indices Close At Record High -- September 12, 2017


Three new permits:
Twelve permits canceled:
One permit renewed:
Four producing wells completed:
Fifteen well name changes; these all look like old wells, with the lowest permit number being 05182 and the highest permit number being 15769; most are inactive; at least one is abandoned; I checked about a dozen of them; none were active, but some had produced a small amount of oil as recently as two months ago 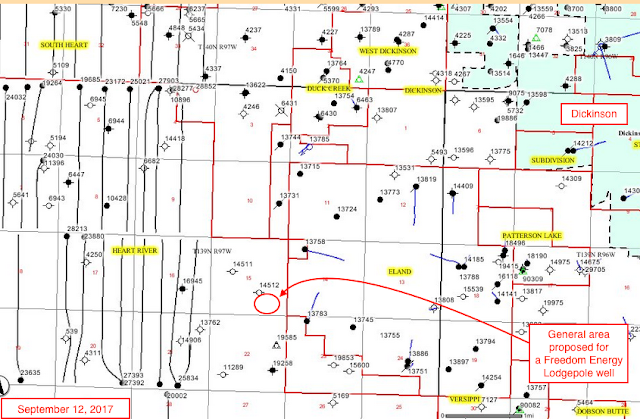 Wow, this must just bum out The Washington Post; Barack Obama, Inc; and Hillary Clinton, LLC: having to report that middle class income hit its highest level on record in 2016. This occurred under then-President Obama's watch and could have been reported by no-President Hillary today, but this story will be reported during Trump's first year as president. Wow, talk about catching a wave.


Median household income in America was $59,039 last year, surpassing the previous high of $58,655 set in 1999, the Census Bureau said. The figure is adjusted for inflation and is one of the most closely watched indicators of how the middle class is faring financially, as the Census surveys nearly 100,000 homes.

Too bad, Hillary didn't have this data in 2016. Of course, she should have visited Wisconsin also but that's another story.


America's poverty rate also fell to 12.7 percent, the lowest since 2007, the year before the financial crisis hit. The percent of Americans without health insurance for the entire year also dropped in 2016 to just 8.8 percent, largely thanks to expanding coverage under the Affordable Care Act.

Not noted, of course, with the deductibles and co-pays, very few middle Americans can actually afford health care, but that, too, is a another story.

For those who like those statistics, you may also like to know that 61% of respondents would like to see Hillary Clinton retire. I think after her book tour ends, that will probable be the last we really see of her.

From CNN, reporting on the new White House communications director:


Hope Hicks, 28, had not moved into the office designated for the White House communications director, instead opting to remain at her current desk just outside the Oval Office.

Smart, smart non-move. Smart woman. Only 28 years old.
Posted by Bruce Oksol at 11:01 AM No comments:

This project has more lives than the proverbial cat. From S&P Global, Market Intelligence, the wind farm that will not die.


Horseshoe Shoal is a familiar seafloor hazard for boaters in Nantucket Sound, about equidistant from Nantucket and Martha’s Vineyard, rising in places to less than 5 feet underwater at low tide. It is also the scene of one of the most drawn-out fights over renewable energy in the United States, now in its 16th year with no resolution in sight: the struggle to build the Nantucket Sound Offshore Wind Farm (Cape Wind).

First proposed in 2001 by Cape Wind Associates, headed by longtime energy executive Jim Gordon, Cape Wind was to be America's first offshore wind farm, with 130 turbines producing, at capacity, 468 MW. It has been blocked by a combination of environmental concerns, the loss of its two original utility customers, and, above all, the opposition of a small group of wealthy and influential islanders who oppose the "industrialization" of Nantucket Sound and the sight of tall wind turbines from their mansions and beaches.

But it is not dead yet. Last month, the Bureau of Ocean Energy Management issued a final supplement to the earlier environmental impact statement, or EIS, approving Cape Wind. The supplement was required under a July 2016 ruling by the U.S. Court of Appeals for the District of Columbia Circuit, which found that the original EIS did not fully satisfy the requirements of the 1970 National Environmental Policy Act, or NEPA. The federal government, meanwhile, is set to issue a final decision on the project this fall.

Email ThisBlogThis!Share to TwitterShare to FacebookShare to Pinterest
Labels: CapeWind

All talk, no hat, or is it, all hat, no cattle: somehow Mitch McConnell's hubris rings false. The headline says one thing, his comments suggest something entirely different. This reminds me of Aesop's fable, the fox and the grapes.

Why forecasters missed on Irma? Nice article for the archives. From Bloomberg.


The credit goes to the Bermuda High, which acts like a sort of traffic cop for the tropical North Atlantic Ocean. The circular system hovering over Bermuda jostled Irma onto northern Cuba Saturday, where being over land sapped it of some power, and then around the tip of the Florida peninsula, cutting down on storm surge damage on both coasts of the state.

“The Bermuda High is finite and it has an edge, which was right over Key West,” Masters said. Irma caught the edge and turned north.

From this week's The London Review of Books, "Puffed Up, Slapped Down," by Rosemary Hill, a very, very sad Prince Charles:


His twenties were probably the most successful decade in terms of public perception.

Young, good-looking and rich in his own right with the income from the Duchy of Cornwall, he could, from a certain point of view, be seen as a prince for the swinging 1960s. After that the biographies chronicle a succession of increasingly difficult milestones.

As he faced his 30th birthday he addressed the Cambridge Union in hair-raisingly ingenuous terms: ‘My great problem in life is that I do not really know what my role in life is.’ None of the journalists he complained about could have said anything more undermining.

By forty he had entered the phase that his godmother Patricia Mountbatten described as ‘desperately sad’. At his birthday party Diana barely spoke to him.

By his fiftieth she was dead and Charles felt he was being tortured by the public over his relationship with Camilla Parker Bowles. The birthday party she gave for him was boycotted by his family.

Meanwhile his mother sailed on from jubilee to jubilee, silver, gold and diamond, overtaking Victoria as the longest reigning British monarch and dragging Charles along in her wake as he broke Edward VII’s record as the longest-serving prince of Wales.

If he becomes king, he will break William IV’s record as the oldest person to succeed to the throne. There were successes during these years. His book based on the 1989 television film A Vision of Britain sold well, his views on architecture attracted attention, but he was resentful of the wife who overshadowed him and still does.

From this week's The London Review of Books, "The Sucker, The Sucker!" by Amia Srinivasan:

Its body, a boneless mass of soft tissue, has no fixed shape. Even large octopuses – the largest species, the Giant Pacific, has an arm span of more than six metres and weighs a hundred pounds – can fit through an opening an inch wide, or about the size of its eye. This, combined with their considerable strength – a mature male Giant Pacific can lift thirty pounds with each of its 1600 suckers – means that octopuses are difficult to keep in captivity. Many octopuses have escaped their aquarium tanks through small holes; some have been known to lift the lid of their tank, making their way, sometimes across stretches of dry floor, to a neighbouring tank for a snack, or to the nearest drain, and maybe from there back home to the sea.

Octopuses do not have any stable colour or texture, changing at will to match their surroundings: a camouflaged octopus can be invisible from just a few feet away.

Like humans, they have centralised nervous systems, but in their case there is no clear distinction between brain and body. An octopus’s neurons are dispersed throughout its body, and two-thirds of them are in its arms: each arm can act intelligently on its own, grasping, manipulating and hunting.

(Octopuses have arms, not tentacles: tentacles have suckers only at their tips. Squid and cuttlefish have a combination of arms and tentacles.)

In evolutionary terms, the intelligence of octopuses is an anomaly. The last common ancestor between octopuses on the one hand, and humans and other intelligent animals (monkeys, dolphins, dogs, crows) on the other, was probably a primitive, blind worm-like creature that existed six hundred million years ago.

That turns out to be exactly right. In Richard Dawkins' The Ancestor's Tale, the 2004 edition (it has since been updated), p. 383, five hundred to six hundred million years ago:


The Lophotrochozoa include other worm-like phyla, for instance the nemertine worms, not to be confused with the nematodes....there are various other more-or-less worm-like phyla, but the biggest and most important phylum of the Lophotrochozoa is the Mollusca: the snails, oysters, ammonites, octopuses and their kind....[Squids], and their cousins the octupuses, are the most spectacularly proficient color-changers in the animal kingdom, streets better than the proverbial chameleons, not least because they change in quick time.

Octopuses, by the way, are color-blind.


The gastropods, including slugs and snails ... are the largest group of molluscs, comprising about 80 percent of living species. Their fossil record reaches back to the Cambrian.

The cephalopods are the biggest and most intelligent of the molluscs. Their 500 million years of evolution have led to suckered tentacles (sic) to manipulate their environment, sophisticated eyes, the ability to change color, and complex social and learning skills.

Squid, octopuses and cuttlefish represent some of the 800 or so living cephalopod species, but 17,000 species have been identified in the fossil record of this highly diverse group.

Included in the extinct groups are enormous squid-like creatures -- orthocone nautiloids -- that swam from the Ordovician to the late Triassic (think dinosaur-age).


RBN Energy: diversified E&Ps maintain capital spending despite oil price volatility.  RBN Energy highlights other companies at their post today, but the one that caught my eye was one company that is very active in the Bakken: WPX. 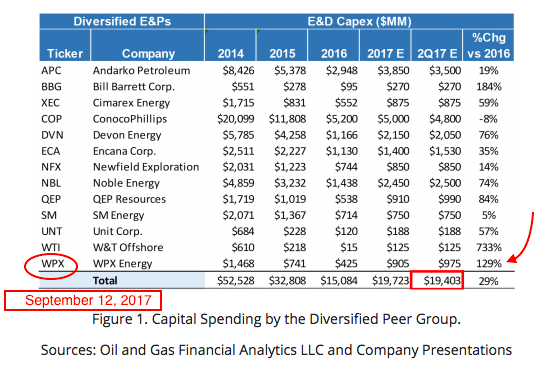 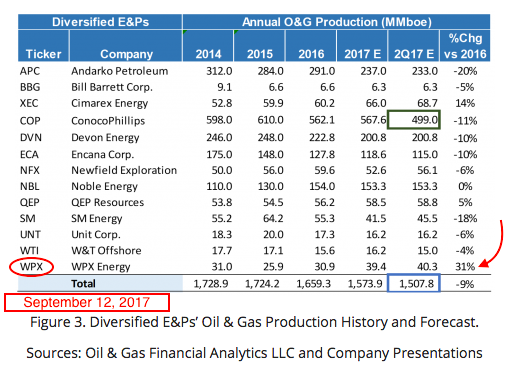 As one example, compare WPX with Bill Barret Corp. Look at CAPEX change, and then look at production change, year-over-year.

Some time ago a writer suggested it was the norm that once OPEC (Saudi Arabia) started to cut production, it would continue the cuts. That sounds to be playing out again this time.

Saudi Arabia says it is open to another OPEC cuts extension.  The current agreement is in effect to the end of the first quarter, March 31, 2018.