Don't even ask, but somehow today I got onto the subject of Kashagan again (I need to get a life, 😃).

I am re-posting the update here; it's pretty interesting:

Eight years of Barack Obama have led us to this (Barack has been out of office for about four days):
https://news.grabien.com/story-dnc-chair-candidates-bash-white-people-racially-charged-foru
So, with that, three strikes against me:
I'm going to shut up and go to bed.

Not A Single Asset In Their Portfolio Outside The US That Competes With Their US Opportunities Right Now; But The Worst Is Not Yet Over For Revenues, Margins -- HAL -- Janauary 23, 2017

In a discussion with another reader concerning when the majors would return to deepwater, highly complex, or longer duration projects, I noted from the conference call:

First, from the CEO:


Now, there has been a lot of debate as to what commodity price will reactivate the higher cost basins, such as the deepwater complex.

It is clearly higher than the price that we are seeing today. Also impacting the price will be OPEC compliance with its new production guidance.

Most people agree that the U.S. is now the world’s swing producer and it has demonstrated its ability to ramp up production quickly at a price that may make it difficult for deepwater projects to compete.

We believe that the race to get deepwater project costs down versus the impact on commodity prices on increasing U.S. shale production will have to play out over the course of 2017.

Then, also from the conference call, in the Q&A portion:


I was talking to the CEO of one of our IOC customers Friday, obviously not going to say who it was. And he said that there was not a single asset in their portfolio outside the U.S. that competes with their U.S. opportunities right now. And to me that’s a pretty amazing statement to me in terms of really how much further commodity prices have to go up to bring some of these more either highly complicated or longer duration projects to the front of the queue get an FID decision made around them.

What I get from that: no one is even thinking about decisions to go back to deepwater until late 2017, and reading between the lines, it sounds like even then (late 2017) there will be no one making decisions. So that puts us well into 2018, maybe later, where the majors say, "Hey, let's look at deepwater."
At best, 2018, they "pull the trigger" -- agree to go back to deepwater. It would be slowly; not a lot of activity. A year to gin up, that puts us into 2019. Depending on the approval process, etc., we are well into 2020 I think before we start seeing return to deepwater and it would not be a boom by any stretch.
We're at $50 oil; the comments above said "how much further commodity prices have to go to bring some of these .... highly complicated ... or longer duration projects to the front of the queue...."
"$50 oil is WTI/ Brent is about $53. "...how much further..." he didn't say but it certainly suggests well above high 60's and probably in to the $70s. It will be interesting to watch (from other sources) what folks think the price of oil needs to get to see projects off-shore.

Now, for something a little different. From The Economist, January 21, 2017.

I'm not going to say any more beyond this about my interest in pandas: it began with The Panda's Thumb, Stephen Jay Gould, c. 1980. Gould was a prolific writer; my introduction to his writing was The Panda's Thumb. My paperback copy is well worn.

In this week's issue of The Economist, linked above: two strange mammals illuminate the process of natural selection.

Some background:
So, let's go to The Ancestor's Tale: A Pilgrimage to the Dawn of Evolution, Richard Dawkins, c. 2004, to see if pandas are discussed.

Dawkins mentions "panda" only once in the book (according to the index): p. 192, in the chapter on Laurasiatheres: a group of miscellaneous "toothy' rodents which have only one thing in common:
they all hail, originally, from the old norther continent of Laurasia.

And the only thing that Dawkins says about the panda, in this case, the "gentle, giant panda: not carnivorous, eating almost nothing but bamboo." And that's it.

Posted by Bruce Oksol at 9:29 PM No comments:

I assume I've seen this presentation before, but I honestly don't recall. A reader sent me the link this morning, and I went through it fairly quickly.

This is the annual energy forecast put out by BP every year; this one was published 2016, and takes the forecast through 2016.

It is important when growing through the comments and the graphics to pay special attention to the "gotchas":
The presentation seems to lean heavily on "rate of growth" and "changes in patterns of growth." This is very, very different from absolute amounts being used.

When it comes to energy, this appears to be the bottom line: between now (2014) and then (2035) the size of the (energy) pie will have grown substantially. The relative sizes of the various slices (oil, natural gas, coal, nuclear, renewable, hydro) will change, but even there, the relative sizes won't change much. Case in point: between 2014 and 2035, the slice of coal will go from 30% of the full (energy) pie to 25%. Someone one a diet would hardly notice; but for the dieter, it's actually "worse" in 2035 than 2014 because the size of the pie (and the size of the slice) will be bigger.

Some graphics that jumped out at me: 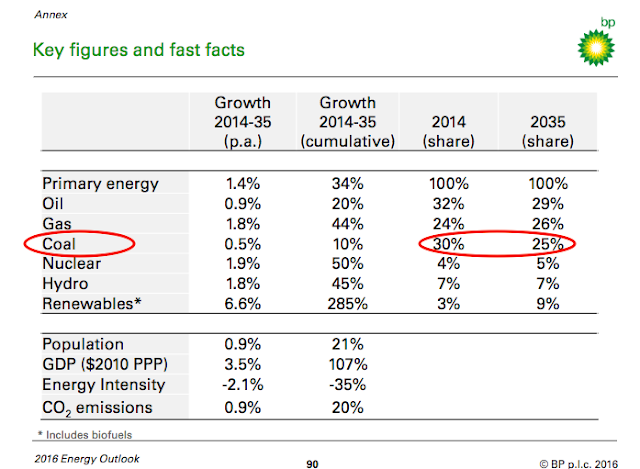 Also, note that almost nothing else changes:
Growth in energy relative to growth in population: again, referring to the graph above. If I read the graph correctly,
And, of course, that makes sense. The population growth will be greater in those countries / continents (China, Africa) where energy use per capita will increase, greatly off-setting energy savings in more developed countries / regions (US, EU).

The Size of the (Energy) Pie 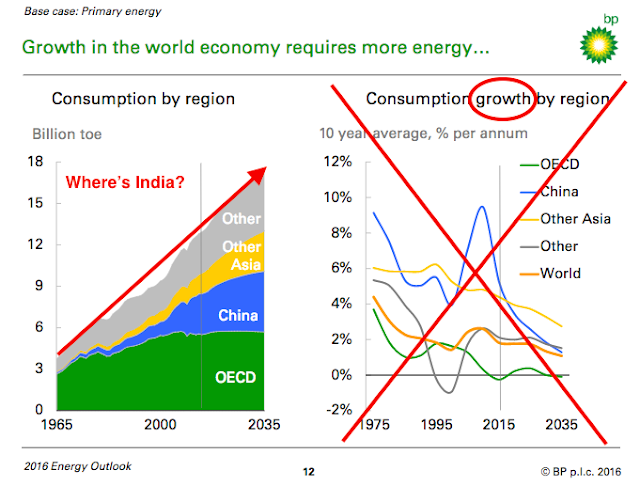 Something else caught my eye: India is "subsumed" (I assume) in the "yellow" (racist, unintentional) "Other Asia." The BP folks are a whole lot smarter than I am, but to not separate out India on this graph seems a bit interesting.

The graph speaks for itself: 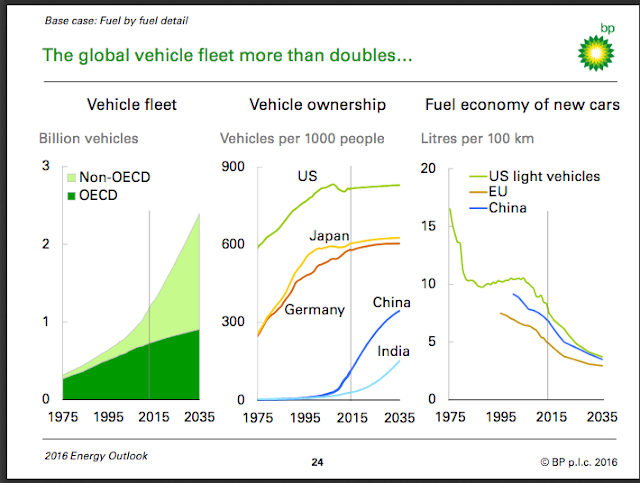 The Fallacy of Crystal Balls: this is the graph that interested me most. No comment (for now). 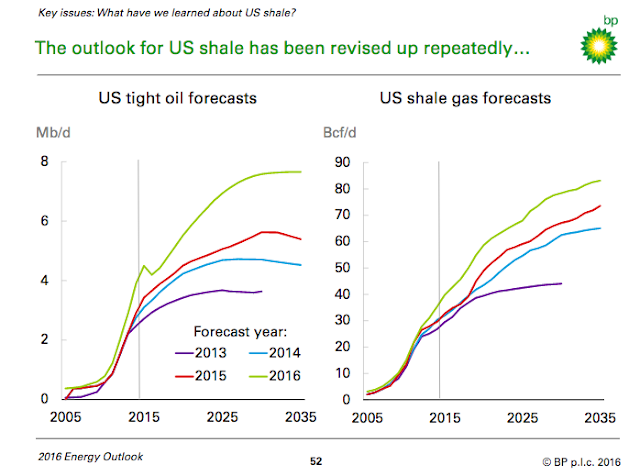 We have been primarily responsible for getting them to their school and non-school events, including:
The first couple of years were in Charleston, South Carolina. The next four years were in the Boston, MA, area. The last three years (now going on our fourth year) were in the DFW (Dallas-Ft Worth-Grapevine) area.

The number of miles we have put on four or five different automobiles across the southeast, the northeast, and now the south, is not something I would want to know, but having said that, I wish I had kept a 3 x 5 index card on each event. It would have been a stack of memorabilia surpassed in size and importance only by the world-record ball of twine located somewhere in the midwest.

For anyone else, I would have complained about all the driving and all the things I have missed (mostly NFL football games and NASCAR) but for the granddaughters, I have never complained.

One of the benefits of all this driving: I have really, really learned the “geography” of the locations we have lived. I don’t have a smart phone and I don’t have GPS in the car, so I study the map very, very well before I leave. About three years ago when we first arrived in this area, I was taking Olivia to soccer training. I was running late, it was dark, I was getting lost. As we neared the field, I asked Olivia if this was the right location, if it looked familiar to her. She said she did not know. She said it was my job to get her where she needed to be; it was her job to play soccer. She was seven years old at the time; not much has changed.

I say all that to say this: it is absolutely amazing all the sports venues available in the DFW area.

After sixty years of being involved in sports in one way or the other, around the world (Turkey, Germany, England, north Africa) I can say I have seen a lot of sports venues, and without question none compare to what I have seen in the DFW area.

Meanwhile, the oldest granddaughter will be at water polo practice in a huge natatorium in Southlake.

And the youngest, little Sophia will be at soccer practice in yet another large sports complex, also in Southlake.

Olivia on the assist, teammate scores, and the game ends tied, 2 - 2. An incredible game. In this league, a tie is almost as good as a win, especially when coming from behind with only 30-some seconds left on the clock.

As noted above, futsal is to field soccer as arena football is to American (outdoor) football. Unlike field soccer where it is 8 v 8 (plus the goalies), futsal is 4 v 4 (plus the goalies). In a sense it seems a bit faster-paced (smaller field of play; no throw-ins (“kick-ins” instead). [In some futsal arenas where the walls define the playing area, there is no out-of-bounds, and therefore no throw-ins/kick-ins, and much faster paced.

Olivia appears to have about eight team members, five on the court, three on the bench. Olivia has played most of the game, just now coming out. From my vantage point, she seems to be as good as any, perhaps better than most. She is “playing up” (she is the only one her team one year younger than the “official” age for this group). She was specifically “recruited” to play with this older team.

With eight minutes left in regulation time (50-minute games), the game is tied 1 - 1 (see final score above). This is FC Dallas, (football club Dallas) and some of these girls will move up through the farm system to play for a professional team (such as FC Dallas), some of whom will play college soccer and some of whom we will see on US Olympic team in eight years.
Posted by Bruce Oksol at 2:01 PM No comments:

March 24, 2019: out of control at the southern border. Detention centers overflowing. ICE releasing detainees; simply not enough room. Busloads of illegal aliens being dropped off at bus stops in El Paso and in Phoenix.


Original Post
Bill Clinton and Barack Obama come out in support of Donald Trump's immigration policies. [March 24, 2019: it's interesting that this video has been taken down at YouTube. Clinton, Obama, and Trump were all on the same page when it came to the southern border .. until Trump became president.]

Let's see if this one is pulled:

Lost a huge bet: I was sure Rex Tillerson would go down to defeat, or at best, 51 - 50 with VP Pence casting the deciding vote. But now I hear Marco Rubio has decided to vote to confirm Tillerson; Lindsey Graham and John McCain had indicated earlier they, too, would vote to confirm.

Abu Dhabi feeling the heat: will merge two state funds into one; one $125 billion investment fund.

Kroger Supermarket: one of our favorite supermarkets here in Texas -- unfortunately there is no Kroger's near where we live. This is incredibly good news. From Reuters: Kroger will add 10,000 permanent posts. Hopefully this means they may add some stores.