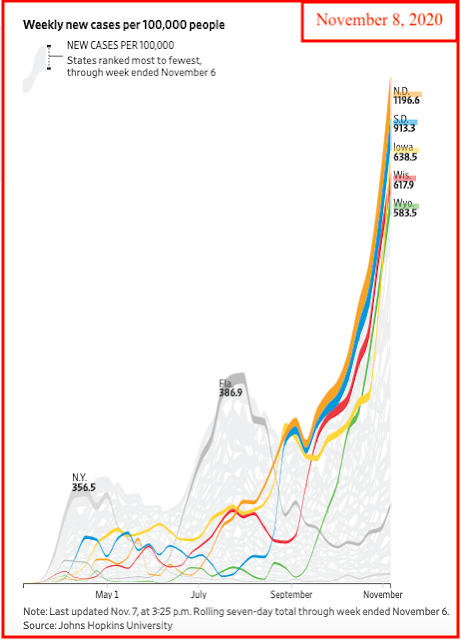 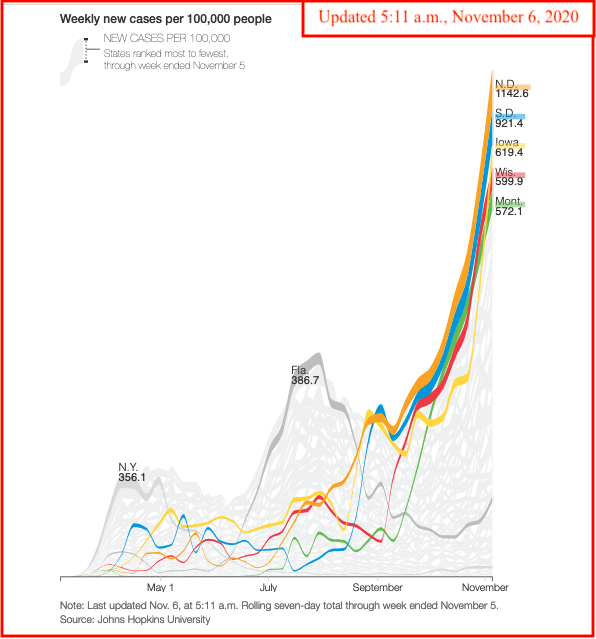 The big question: how is Medora doing? 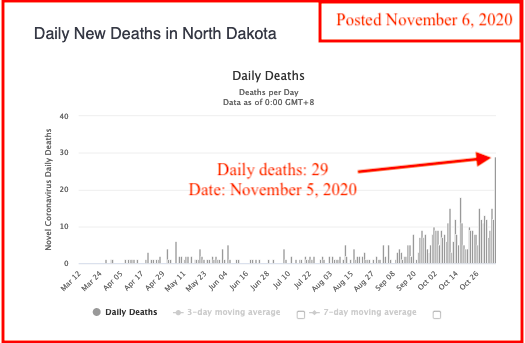 This does not mean all "29" died yesterday. This was the number of deaths associated with Covid-19 that were reported yesterday. Big difference.

Anyway, enough of that. Once I quit blogging, if I have any time left, I will read the current issue of The New York Review of Books. I doubt there will be much of interest.

A digression: someone asked me the other day why I had not posted my thoughts regarding the election. I replied. More validation: The New York Review of Books has nine pages of essays from prominent politicians and analysts on the 2020 presidential election, a Part I and a Part II. No need for my comments when such knowledgeable sources are writing essays on the subject. Seriously, I will weigh in once the results are finally known and declared official and one or the other candidate concedes. Spoiler alert: historians will get it "right" twenty years from now.

Years ago I tried reading Nabokov's Lolita. I believe it was finally published in English in Paris in 1955, and finally released in the United States in 1958. It was held up in the US due to pornography and US mail issues, or something to that effect. The dates are important. Salinger's Catcher in the Rye was published in the US in July (July 16th, I believe), 1951. At the end of the day there is overt pedophilia in one of the books, less overt pedophilia (and maybe of a different type), in the other. I've provided a link regarding this issue in an earlier post. I'll re-post it if I remember.

Years ago, as noted, I tried reading Navokov's Lolita. I couldn't follow and I was greatly disappointed in the lack of overt prurient, pornographic passages. I doubt I read more than the first few pages, and thumbed through the rest looking for something to hold my interest. Nothing.

Then, completely unexpected, I caught the Hollywood interpretation of the book. Part of the screenplay was actually written by Nabokov, and after the original director was fired, Stanley Kubrick finished the film and  is credited as the director.

The movie was superb; whether it followed the book; and whether it handled the subject correctly is another story. The important thing is that the movie, and subsequently reviews found through google searches, led me to appreciate the book. I have a copy of the book now and that's my reading material for the month.

It's an incredibly good book. Times have changed between 1950s and 2020s and it is obvious that Americans misread the book when it first came out. "Misreading" is not the best word, but for now it will have to do. This book could not be published today without being slammed by every critic, except perhaps Bill Maher who would continue to  remark how great it was.

The movie's "Lolita" was played by a fourteen-year-old. The novel said she was twelve. The censors, or Hollywood, or the producers, or someone told Kubrick that a "twelve-year-old" would not be allowed to play the part. The youngest they could go was fourteens years old. I did not know how old Kubrick's "Lolita" was when watching the film, but she could certainly have passed off as eighteen years of age the in the black and white film, the costuming, and the hair. If one does not accept eight years of age, then certainly a mature sixteen years old. But definitely not fourteen years old (I'm getting old so perhaps my age betrays me) -- and certainly not twelve.

On Thursday, I believe it was, the day I left for Tucson, it could have been Wednesday, TCM was featuring a 24-hour film fest with Lizabeth Scott. Wow, what a great group of movies. This was my introduction to Lizabeth Scott and I was pleasantly surprised. I watch two of the six or so movies starting Scott that TCM was featuring in that 24 hours. I was unable to watch all of them, mostly because I could not stay away for 24 hours. Four of the movies would air after 11:00 p.m. In addition, by the middle of the third Lizabeth Scott movie I was saturated with her and could not continue. That was too bad. Apparently her best, and her personal favorite, was going to air about 3:00 a.m. I'll catch is some other time.

I said all that to write about two things.

First, wow, what a breath fresh air. Read her wiki entry. Died at ninety-two years of age and nothing scandalous one expects out of Hollywood. There probably were a few scandalous items but if they were, I glossed over them. The wiki entry tried to stir up one scandal, but it seems incredibly weak. Ho hum.

The dates are important:

The TCM presenter, Bob Mankiewicz, did not have to tell us that Lizabeth Scott was a dead ringer, a döppelganger, a spitting image of Lauren Bacall. It was amazing. Kudos to great Hollywood marketing, of course.

But where Bob Mankiewicz was wrong was when he said Lauren Bacall would have been better suited to play opposite in Bogart in Dead Reckoning. Mankiewicz is dead-wrong. Maybe more on this later.

My party is arriving.

I will come back later to proofread for typos.

This is wonderful. It looks like the blogger app either fixed a bug in their software or improved the app. Either way, great news. Makes it easier to post new notes.

I had an uneventful drive from our hovel near DFW (north Texas) to Tucson. I needed to be at the Tucson International Airport to pick up extended family members who flew into Tucson; all of us to attend the wedding of one of our two Tucson nieces; we attended the wedding of the other niece here in Tucson a few years ago.

I abhor flying and will drive whenever I can. My next trip to Portland, OR, unfortunately, is going to require a bit of flying. Oh, well.

As usual, I always drive a rental on these cross-country trips. Enterprise Rent-A-Car has never let me down. I reserved a Nissan Altima, bigger than I needed, but a nice road car, and more importantly big enough for the passengers I will be picking up at the airport.

When I arrived at Enterprise -- five minutes from where we live -- the car was already to go but when the Enterprise associate learned I was driving to Tucson, she suggested a much nicer SUV, at the same price. I wasn't looking forward to a SUV with poorer gas mileage than the Altima, but the Chevy Equinox looked absolutely gorgeous.

Sophia was with me and she agreed: the black, presidential-looking Chevy Equinox "SUV" was the nicest-looking car Sophia had ever seen me drive. It turned out to have great mileage; no complaints. Later: wow, great car. Loved it.

When I'm ready for my next car, which is any year now, I will certainly look at the Equinox, though I still prefer the Honda Civic, but there's a lot to be said for the Equinor vs the Civic. So, we'll see. Comparing apples to oranges, again.

Google maps said the drive from DFW to TUS was just under fourteen hours. I had to be there by 4:00 p.m. Friday. I kept my normal schedule with Sophia and departed Grapevine, TX, at 7:30 p.m. central time; I would gain one hour driving west.

Having not had full nights of sleep all week (for reasons I won't go into now) I was quite tired by midnight; or maybe I am simply getting older and unable to drive well into the night as I was able to do in the past. I took four or five catnaps along I-10 throughout the night, arriving at the Texas - New Mexico state line around 8:30 a.m. Siri said the drive from there to Tucson was about four hours. I had plenty of time, so I took longer breaks but did not require any more catnaps.

Lots of construction on the interstate. At least two huge new interchanges were being built well outside any urban area here in Texas. This speaks volumes about expectations of DOT and where growth will be over the next fifty years in Texas. Wow, there's a lot of land. I first noticed that (again), when I turned off I-820 which circles Ft Forth to head southwest on I-20. So much undeveloped land.

I still enjoy driving among the 18-wheelers. There's a bit of a sporty NASCAR component.

One cannot believe how many new motels/hotels line the interstate through the Permian (Midland to Odessa) and generally their parking lots were empty; at most a dozen cars where one would expect five to six dozen (?). Finding a room would have been no trouble but, as noted, I took catnaps at rest areas.

In my own car, when traveling cross country, I maintain speeds below 65 mph due to age of the vehicles. With rental cars, I drive with the flow of traffic. Somewhere west of the Permian, perhaps in Texas, but more likely not until New Mexico, the speed limit went to 80 mph, where it stayed most of the trip.

Crossing into east Arizona -- where it is really, really, really remote, I noted that I was flowing with the traffic at 94 mph (no typo). The trucks were staying within the speed limit. I was completely unaware how fast I was going until I checked the speedometer. I slowed to 88 and that's about where everyone remained, except for the trucks, staying under the speed limit.

I did not notice any highway patrolmen during the entire trip until about thirty miles east of Tucson, then five law enforcement SUVs were noted over the next ten miles or so. Only one truck was stopped but I think that was due to mechanical issue, and not a safety violation.

I'll be here through Sunday. I don't know the wi-fi capabilities where I will be staying (a bed-and-breakfast / BNB) and I assume I will be quite busy but it's the weekend so my absence won't affect the blog much.

Sophia and I have Spanish lessons daily on the internet app, Duolingo. We have had a perfect 45-day run, not missing one day of instruction. We will continue the instruction remotely, on Facetime. Depending on whether I see a cousin in Phoenix on Sunday, I hope to be back home, north Texas, by Monday morning or Monday evening. I help Sophia with her distance learning, Monday-through-Friday, starting at noon. so I hope to be home by noon.

Oh, masks? They are "required" everywhere but masks seem to be a non-issue. Everyone complies; if not, someone may remind them but that's about all it takes. We're at about 3% -- the number of Americans that have tested positive for Covid, so at the rate of another million each month, it will take about 40 months (previously discussed) for America to reach herd immunity. That will be "expedited" with a universally accepted, inexpensive, effective vaccine, something I don't expect to see in the next couple of years. The "universally accepted" part of the equation will be the most difficult.

Things will go better if the government includes a free toaster with every inoculation. Throw in a free Apple iPad and I will take the "shot" twice.

I'll come back later to look for typographical errors. On my way to the airport VIP lounge for a free drink. LOL. No wonder "they" called us palefaces. 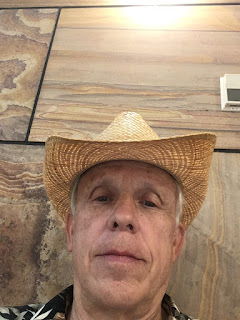