Original Post
The dots are incredibly interesting to connect. One knows we are not getting the whole story, so one can make up any story one wants. I have my story; I'm sure you have yours.

Today, CNN is reporting that at $50-oil, Saudi could run out of cash in less than five (5) years. I assume the princes realize that, also, and are not happy with their current king, and that's just one of the reasons they want him ousted.


The [London] Independent] is reporting that 8 of King Salman's eleven (11) surviving brothers want him ousted. Considering the younger brother that would replace him is 73 years old, doesn't sound like much of a change, but any royal intrigue at this time (Iran, Yemen, ISIS, Russia) is not a good omen for Saudia Arabia.

In fact, this is the new reality which has been posted more than once on the blog:


Read the rest of the story at the link and see if the writer said anything more or less than what I wrote over the weekend:


So, now back to today's CNN story that Saudi could run through their cash in less than five years if oil stays at $50/bbl:


If oil stays around $50 a barrel, most countries in the region will run out of cash in five years or less, warned a dire report from the International Monetary Fund this week. That includes OPEC leader Saudi Arabia as well as Oman and Bahrain.

Low oil prices will wipe out an estimated $360 billion from the region this year alone, the IMF said.

Huge budget surpluses are quickly swinging to massive deficits as oil prices have crashed to around $45 currently from over $100 last year. Many of these countries are being forced to tap into rainy day funds to weather the storm.

The depressed oil prices have come at a time when spending has gone up as many of these countries are grappling with regional violence and turbulence in financial markets. 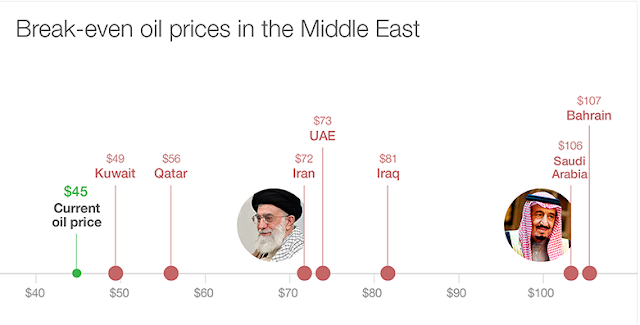 Oh, just cry me a river of riyals.

Speaking of running out of cash, The Wall Street Journal is reporting that ObamaCare is not going well. This is an op-ed, so it is likely to be very, very biased. Beware.


ObamaCare’s image of invincibility is increasingly being exposed as a political illusion, at least for those with permission to be honest about the evidence. Witness the heretofore unknown phenomenon of a “free” entitlement that its beneficiaries can’t afford or don’t want.

This month the Health and Human Services Department dramatically discounted its internal estimate of how many people will join the state insurance exchanges in 2016. There are about 9.1 million enrollees today, and the consensus estimate—by the Congressional Budget Office, the Medicare actuary and independent analysts like Rand Corp.—was that participation would surge to some 20 million. But HHS now expects enrollment to grow to between merely 9.4 million and 11.4 million.

Recruitment for 2015 is roughly 70% of the original projection, but ObamaCare will be running at less than half its goal in 2016. HHS believes some 19 million Americans earn too much for Medicaid but qualify for ObamaCare subsidies and haven’t signed up. Some 8.5 million of that 19 million purchase off-exchange private coverage with their own money, while the other 10.5 million are still uninsured. In other words, for every person who’s allowed to join and has, two people haven’t.

Among this population of the uninsured, HHS reports that half are between the ages of 18 and 34 and nearly two-thirds are in excellent or very good health.

The exchanges won’t survive actuarially unless they attract this prime demographic: ObamaCare’s individual mandate penalty and social-justice redistribution are supposed to force these low-cost consumers to buy overpriced policies to cross-subsidize everybody else.

The HHS survey shows three of four ObamaCare-eligible uninsured people think having coverage is important—but four of five say they couldn’t fit their share of the premiums into their budgets even after the subsidies. They’re not poor; they tend to have jobs in industries like construction, retail and hospitality but feel insecure financially; and they prioritize items like paying down debt, car repairs or saving to buy a home over insurance.

The law’s failure to appeal to the young and rising middle class is already cascading through the insurance markets. Researchers at the Robert Wood Johnson Foundation and Urban Institute recently published a remarkable study of the industry barometer called medical loss ratios, or MLRs, and the pressure is building fast.

ObamaCare is going to be one of those GOP gifts that keeps on giving. Every two years.

The DailyCaller is reporting:


Fifty-one percent of working Americans make less than $30,000 a year, new data from the Social Security Administration (SSA) shows. That’s $2,500 a month before taxes and just over the federal poverty level for a family of five.

The new numbers come from the National Wage Index, which SSA updates each year based on reported wages subject to the federal income tax. In 2014, half of working Americans reported an income at or below $28,851 (the median wage), and 51 percent reported an income of less than $30,000. Forty percent are making less than $20,000.

Keystone XL jobs would work out to twice, three, four times these income levels. But as Hillary would say, what does it matter?


The federal government considers a family of four living on an income of less than $24,250 to be impoverished.


Los Angeles Police and the CHP chased a suspect for close to two hours Sunday from Altadena to downtown LA and back.

The suspect is reportedly wanted for making criminal threats out of Altadena.

I didn't even know there was a "Freeway 2" in the LA metro area.
Posted by Bruce Oksol at 7:40 PM No comments:

This is from a Bismarck Tribune story, dated September 14, 2010, in which experts forecast when North Dakota would be producing one million bopd based on the prolific Bakken:

Unfettered, North Dakota could produce in excess of 2 million bopd by the end of 2016, but conditions are such that the time to drill out the Bakken has been extended by decades.

The Washington Times posts a reprint from The Williston Herald on the Bakken bust, a human interest story:


He moved to Williston in 2010 and found work as a mechanic, bouncing around from one better-paying job to another, until being hired as a caser - someone who lays the final pipe after a hole is drilled for a rig.

For several years, work was steady, and money worries disappeared. He saved by living in a camper for several years, and was eventually earning enough to rent a townhouse for $3,000 a month and move his pregnant wife and three children here.

But at the beginning of this year, as the rig count started a free-fall from nearly 200 to the 68 in operation now, rumors started to swirl in the oil patch.

“We all saw it, every single one of us saw it,” Burgess said of the downturn, “it” being layoffs at major companies such as Halliburton, Baker Hughes, Schlumberger and Sanjel.

“We didn’t realize it would fall as far and as fast as it did,” he said. “We knew that there was going to be trouble, but with them telling us it was going to be fine, we just got invested in it.”

Then, in late May, Burgess, 34, walked in to get his paycheck and was handed a pink slip along with it.

The family suddenly found themselves in over their heads, and Burgess, who could no longer afford the rent, was forced to break his lease. He took his wife and kids back to South Dakota, but decided to give Williston another shot.

At first, the job search proved fruitless. The oil industry, where most of Burgess’s training is, wasn’t hiring, and even job fairs seemed to be dead ends.

“A lot of (oil companies) are there (at the fair) just for looks,” Burgess said. “They would tell me, when the oil field picks back up give us a call.”

By the middle of last month, he was staying with a friend in a studio apartment, and was down to just a few dollars. Discouraged and broke, he headed back home a week ago to his family on the Pine Ridge Indian Reservation and its sky-high unemployment rate. He wasn’t there long before a few welcome job offers came in.

Much more at the link. I didn't want to post the article because of all the "awful" ads at the linked site, but I knew readers would send me the link.
Posted by Bruce Oksol at 1:20 PM No comments: