I apologize for the poor writing below; I can't articulate well what I'm trying to say; I could blame it on being exhausted from being out in the Bakken all day, putting 105 miles on the odometer on gravel roads, but I never was a good writer, so no excuses. Hopefully folks will get the gist of what I'm trying to say, below the video (the video is here to get my energy back up).

A completely random video that keeps my spirits up. The ballad is not uplifting but Roy Orbison always re-energizes me.


“Music has always been a matter of Energy to me, a question of Fuel. Sentimental people call it Inspiration, but what they really mean is Fuel. I have always needed Fuel. I am a serious consumer. On some nights I still believe that a car with the gas needle on empty can run about fifty more miles if you have the right music very loud on the radio.”
― Hunter S. Thompson

"Anonymous" has inadvertently raised another issue. It's been my contention that monthly production from the Bakken has been held back due to a) lack of enough takeaway capacity; and, perhaps, b) lack of demand.

With increased crude-by-rail capacity coming on-line almost daily now and increased demand, it will be interesting to see if there is a jump in Bakken production. First, with increased rail, there is increased takeaway capacity, and, second, with Enbridge decision to take the pressure off Cushing, there seems, to me, that we might see an increase in Bakken production that cannot be explained simply by continued Bakken drilling.

NDIC has a great slide presentation showing the takeaway capacity that now exists with pipeline plus rail, slides 81 and 82 of NDIC's November, 2011, presentation, linked near the top of the sidebar at the right.

Now that rail can take oil directly to the coast, there may be increased production. And, of course, infrastructure (pipelines in the oil patch) continues to improve.

I'm expecting to see a jump in Bakken production, more than what folks have been predicting based on past production.  The weather has been great; active rigs have reached new records; more infrastructure has been laid in; so we will see.
Posted by Bruce Oksol at 10:52 PM No comments: Links to this post

Keystone: The Courageous Decision Would Have Been to Decide -- MinnPost.com


The Obama administration has now effectively delayed a decision on the Keystone XL pipeline, which is designed to bring up to 700,000 barrels of Alberta oil-sands oil into the United States. As reported by John Broder of the New York Times, this continues an administration trend of postponing controversial energy decisions beyond the 2012 election. Previously, President Barack Obama delayed a review of the nation's smog standard until 2013, pushed back offshore oil-lease sales in the Arctic until at least 2015 and blocked new regulations for coal ash from power plants.

A more decisive and courageous decision would have been fair to everyone involved in the $7 billion Keystone XL project. It also would have been fair to the Canadian government, which is considering an alternative, the Northern Gateway pipeline to the Pacific Ocean terminal at Kitimat, British Columbia, with shipments to China and other Asian customers. In addition, Minnesota already gets oil-sands oil via the Alberta Clipper pipeline from Hardesty, Alberta.

The president could have announced a decision to reject Keystone XL based on his campaign promises to reduce our dependence on fossil fuels and to focus on the threat of global warming.

Wow, I've said the same thing, and said it a long time ago: the President needs to make a decision. He is simply slow-rolling the oil industry.

The author of MinnPost said this:


The demand for increasing amounts of Alberta's oil sands oil is there. We already use a lot of it in MN via the Alberta Clipper Pipeline. Most of the cars on MN highways are running on the gas from that heavy oil. Our Pine Bend refinery is the largest heavy oil processing refinery in the U.S. A direct pipeline from Pine Bend to MSP supplies the jet fuel for all those planes taking off from points beyond.

There are other pipelines today which run south from the oil sands. Keystone XL is needed to handled future increases. If we punt, Canada will go west to supply Asia.

I don't follow the MinnPost.com blog. The reader who alerted me to this says the blog is left of center.  I wouldn't know. I didn't read the story linked above very closely. I've beat the story to death; folks know where I stand on it. The Keystone XL is dead; the President killed tens of thousands of jobs; he continues to slow-roll the oil industry.

Just so folks don't spend a lot of time replying, I generally don't post comments to op-ed pieces, unless they add something positive to the discussion.
Posted by Bruce Oksol at 9:42 PM No comments: Links to this post

Random Photos of the Stowers and the Odin Jorgenson Wells -- Northwest of Williston --The Bakken, North Dakota

This is the first time the local farmer has seen these wells shut down; one has a workover rig on it now.

Data below the photos. 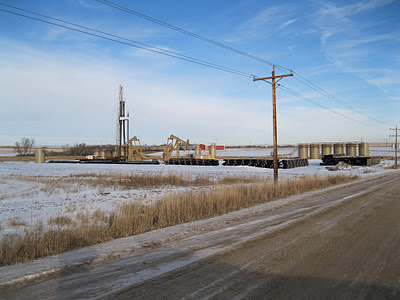 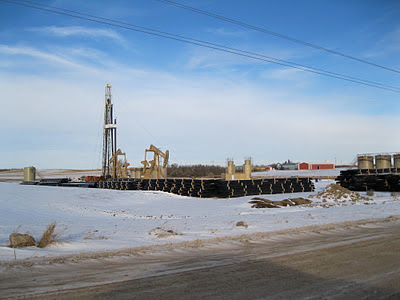 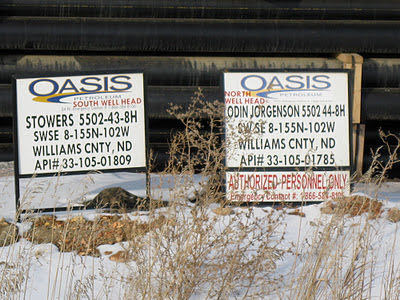 Notice the "miles" of pipe -- staging area for new pipeline somewhere.
Posted by Bruce Oksol at 8:01 PM No comments: Links to this post

Both of G3 Operating permits are for wildcats in Williams County (the wells will be Pasternak wells; I noted today there is a Pasternak Road northwest of Williston).

Of the ten wells that came off DRL status, some of them had some nice IPs, of note:
Of more concern, however, were these (but there may be a perfectly good explanation; I've not had time to research them yet):
It's very possible the "P" stands for "pilot" hole and and the rest of the story is yet to be told. The "D" stands for the sector in which the well was sited.
Posted by Bruce Oksol at 6:37 PM No comments: Links to this post

Of the four wells reporting today, I included their fracture data (stages, and proppant).
Posted by Bruce Oksol at 11:42 AM No comments: Links to this post


Other reasons to be bullish the Bakken names has to do with additional railcars. This is important as Continental Resources has been using the railroad to sell its crude in Louisiana. Louisiana Light is selling at a much higher price than WTI and should continue to do so. Hess' railcars will be able to initially ship 54000 bopd, but says it will increase to 150000 Bo/d depending on demand.


The premium seen for Louisiana Light Sweet more than covers the increased cost of transport. A very interesting point made by Mr. Hamm is his take on Cushing and the tightening of the differentials of WTI vs. Brent. He believes this has already begun. I think the recent tightening has more to do with the price of world oil (Brent) decreasing because of the fear of financial collapse in Europe. Mr. Hamm also sees in 3 to 6 months a relief caused by the Seaway Pipeline.

Conoco has said they would be selling and there are interested parties. Longer term, Mr. Hamm states the first segment of the Keystone XL from Cushing to Houston will provide a much larger, long term relief. [In hindsight, that was an incredible nugget reported by Mike. The Conoco sale/Enbridge buy/Seaway reversal was reported November 16, 2011, three days later.]

Posted by Bruce Oksol at 8:23 AM No comments: Links to this post

Update
I blew it on this one. The five-inch road refers to the thickness of the asphalt. See comments. My original post suggested that there had been a typographic error with regard to the length or perimeter of the road.

“Next spring we should have a brand new 5-inch road that surrounds the property,” he said.