North Dakota Will Out-Produce Venezuela By The End Of This Summer -- June 17, 2018

This is why the blog is important to me.

Ten years ago I would not have been able to put "one million bopd" in perspective.

But now I can:
So, that's what a million bopd means.

On a side note: Bernie Sanders advocates the Venezuela model of government.

Somehow, this Tesla ad is not reassuring: "Our cars catch fire less often than the average car on the road."


It almost sounds like a perfect Geico commercial or a State Farm commercial: "We know a thing or two. We covered it." LOL.

By the way, when did you last see an "average" car in your neighborhood spontaneously combust? LOL.

Link here. I hope the link never breaks. "Thank God, it was only my husband that could have been burned alive. I can always find another husband, but the girls ..." 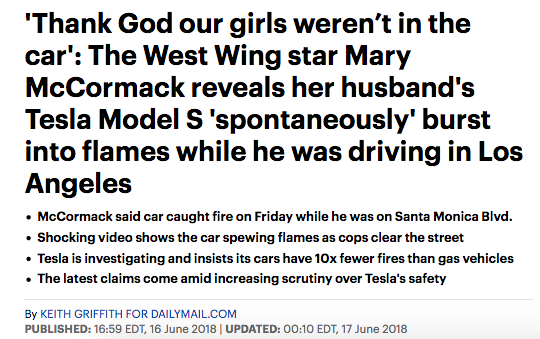 This is being re-posted for newbies to help them understand the Bakken a bit better. There is nothing new here; it has been posted before. I'm not sure all the links still work. I now know a lot more about the Bakken than when I first started, so some of this may be "out of date," or very wrong, But it is what it is. Or more accurately, it is what it was some years ago.

At the very end of this re-posting, I have posted a little nugget that might be new for all of us.
Previously posted:

The 2013 USGS survey is linked at the sidebar at the right.

Newbies should go back and read this post of November 1, 2011.

There are numerous factors affecting the quality of an oil basin. Total organic content (TOC) is one of the Big 5.


A bit more about TOC at this link. Now, how does the Bakken stack up against, let's say, Saudi Arabia?


There are five areas in the world where "world class" source rock exists:
For comparison, TOCs:


When I first came across this information, I about fell off my chair: the Bakken has a TOC average of 11 percent, compared to Saudi with varying reports of 2 - 5 percent. Wow.

Did the USGS 2013 Survey of the Bakken-Three Forks have anything to say about the TOC of the Bakken? Yes, based on new information, and I quote from the first page:


"The upper and lower shale members are the primary source rocks for the Bakken TPS, with present-day total organic carbon (TOC) values from less than 1 weight percent to 35 weight percent (Lillis, 2013)."

Again, more recent data suggests the TOC in the Bakken can be as high as 35%. That must be some kind of record.

The four-page USGS 2013 assessment does not provide more detail regarding TOC. It does not matter. But it does put the Bakken into perspective for some folks. Like me. [Ryder Scott, June-August 2011, Vol 14, No 2, states that "a total organic carbon (TOC) of 2 percent is considered a sufficient screening criterion for oil shale plays. However, both the Bakken and Arthur Creek ["Northern Territory, Australia] have been reported to contain much higher TOCs. Greater TOC and shale thicknesses are correlated to higher production." -- Ryder Scott. See comments below.]

Now, something new. First of all, repeating:


"The upper and lower shale members are the primary source rocks for the Bakken TPS, with present-day total organic carbon (TOC) values from less than 1 weight percent to 35 weight percent (Lillis, 2013)."

I recently received a personal note from a Bakken operator who suggests that someday operators will "crack the code" how to economically exploit the source rock, the upper and lower shale members.

If that happens, "Katie, bar the door."

Oil tanker coming up the Missouri -- setting sail for the Confluence!

With regard to the Dreadnoughts over at YouTube, one of the comments:


If anything the band was named after the song, not saying it was... But "The Dreadnought" was a sea shanty most probably written and sung by sailors upon a packet ship named; (yep) "The Dreadnought".

Given that the ship sank in 1869 off of Cape Horn, I would argue that the song was around long before the band and their cover of it.﻿

Having read twice Gavin Menzies' first book and now reading for the second time his second book, I have great respect for the Dreadnought sailors (and all sailors who have doubled Cape Horn, including Captain Magellan). I also feel I "know" Cape Horn" a whole lot better and it's no surprise that the Dreadnought sunk of Cape Horn (assuming, of course, that's accurate).
Posted by Bruce Oksol at 10:56 AM No comments:

Wow, this surprised me.

For an upcoming post, I was looking to see how the national media was reporting the Bakken now that it is on the verge of setting new all-time records.

I put in a very, very "generic" search over at google.

See screenshots. Despite the incredibly "generic" search, lo and behold, "themilliondollarway" was actually a hit on the very first page.

I had to take two screenshots because I could not capture the full page with one screenshot: 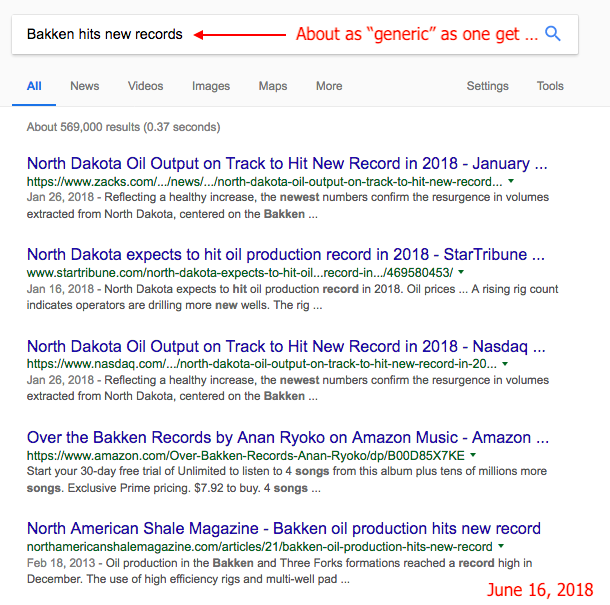 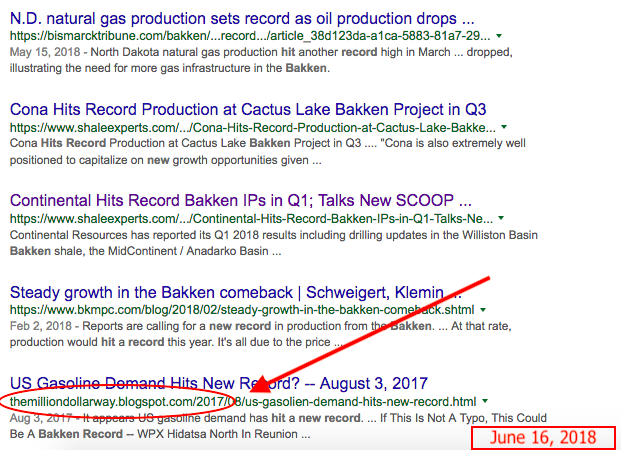 Another example of a writer who has no clue. Link here.

This article was posted in December, 2014. This was just after Saudi Arabia announced a surge in crude oil production to crush US shale operators. The surge lasted two years when Saudi Arabia realized its "trillion-dollar mistake" and cut production hoping to raise prices.

The writer apparently does not understand the importance of E & P companies managing their resources.

We've talked about this many, many times. IPs are but one metric. There are many, many other (and better) metric points. 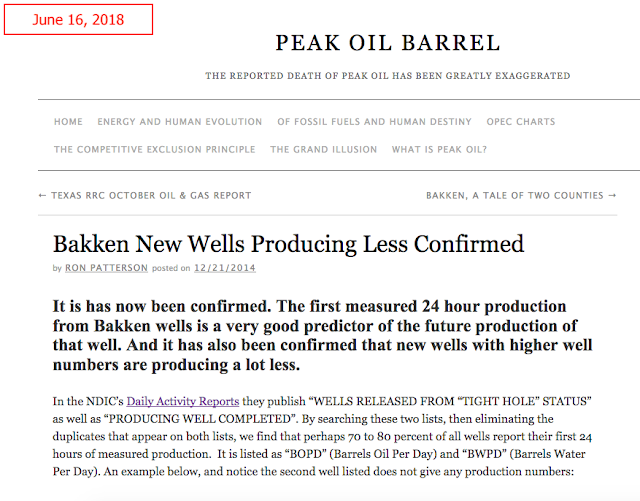 The NDIC site is still down; it's been down all weekend. The "comments" app for the blog may not be working.

But other than that things seem okay with the world.

Which reminds me, I better check my twitter feed. I can only imagine what President Trump is tweeting this morning. Actually I cannot.

So, top stories from the Bakken this past week.

The top story, of course, was the announcement that North Dakota crude oil production almost hit an all-time record, two months earlier than predicted by the NDIC. Noted geologist Art Berman said this was not going to happen; Peak Oil Theory said it was impossible; and, Jane Nielson has never updated her post (at least the last time I checked) in which she said the Bakken was "a lot of hype"or something to that effect.

The top US energy story this past week: US gasoline demand hit an all-time record. Mostly due to the fact that Tesla production was delayed significantly.

The top international energy story: Venezuela starts importing oil. And on the same day that is announced, the price of WTI and Brent fall 2.5% to 3.5%, respectively. Just one more example, Venezuela doesn't matter any more with regard to global oil supply. Venezuela joins that list which includes Libya, Iran, Iraq, the North Sea, and Brazil. The only oil-producing countries that matter are Saudi Arabia, the US, and Putinstan.

But it is a fool's errand to predict the price of oil.  And here.

Refineries
If there weren't already so many top stories, this would have been a top story: North Dakota grants an air quality permit for the refinery near the park despite 11,000 comments from out-of-state suggesting this is a huge travesty

Miscellaneous
Dickinson, Minot, and Marmarth, ND, were not on the USA Today list of least livable cities
Over 35,000 oil and gas permits have not been issued by the state of North Dakota
Great Britain facing a wind energy "drought"; will add a nuclear reactor
Very fitting: Miss Williston wins Miss North Dakota