Denny Hamlin is the winner after a thrilling and grueling Daytona 500 that took two days, and overtime; and saw multiple caution flags in the final 16 laps and OT.

It's the third time Hamlin has won the Daytona 500, and he is the first driver to win back-to-back years at the Great American Race since Sterling Marlin in 1994 and 1995.

The celebration in victory lane was muted after Hamlin's win because of a crash on the final lap of the green-white-checker finish that saw Ryan Newman's car go airborne and flip on the track several times after jockeying for position with Hamlin and Ryan Blaney coming out of turn four. [More than an hour after the finish of the race, no update on Ryan Newman. Apparently car engulfed in flames at height of post-crash.]

Coronavirus statistics here. It's only a snapshot in time but it's a good report. Update here.
Diamond Princess cruise ship:
Coronavirus: we are missing an analysis of those folks who get the disease (COVID-19) when they are infected with SARS-CoV-2 and those folks who do not get the disease when they are infected with the virus. "Underlying conditions," to include age, is obvious but what about cigarette smoking?


China, back to work: more than 80% of state-owned firms’ manufacturing subsidiaries have resumed work.

AAPL: says it will not meet quarterly guidance due to coronavirus; this happened exactly one year ago -- also due to problems in China. The question is whether Tim Cook will "blow this [China] off" as simply a bump in the road, or move more manufacturing back to the US. The problem is that Apple has so much manufacturing in China, to move any "piece" back to the US is simply marginal.

US markets: all three major indices are down slightly in overnight-premarket trading;
Posted by Bruce Oksol at 8:27 PM No comments:

Four and a half sections.

At best, I would think Spring Creek oil field is Tier 2.

Look at the initial production for two Nine Point Energy wells that will be coming off the confidential list this week: 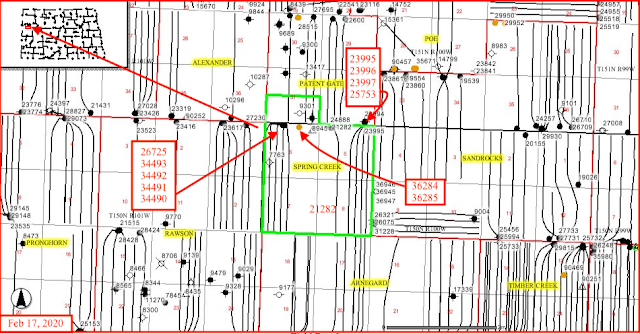 The wells in this oil field:


Owing to a collapse of oil prices at the end of 2018, M&A activity in oil and gas has almost ground to a halt after a flurry of deals last autumn. After a decade of funding the expansion of unconventional oil and gas, Wall Street investors have lost patience and want a return on their investment.

Andrew Dittmar, Senior M&A Analyst at Enverus, notes, "investors who funded the shale revolution over the last decade have become vocal in advocating for pay-outs and cutting back on providing new capital. That flowed through to limited M&A and a negative reaction to deals for much of the year."


With almost 1.4 billion people, India remains the most energy-deprived nation on Earth. The upside for demand seems almost unlimited. India has 635 million people under the age of 24. This is a burgeoning young population the size of the total populations of the U.S., Japan, Germany, France, and Canada. Coal will remain the main source of energy, but the proven global reality that demand mounts as human development progresses makes India’s oil usage unidirectional: up.

Today, oil accounts for 25 percent of India’s total energy demand, rather high for a still developing country. The latent demand, however, is just staggering. Indians use less than 0.2 gallons of oil products per day, versus 2.6 gallons for the U.S. Even though it has almost 11 times more people, India overtook Japan only in 2015 to become the world’s third largest oil consumer after the U.S. and China.

Over the past decade, China (45 percent) and India (20 percent) have accounted for the bulk of new global oil demand. Driven by more diesel fuel, gasoline, and LPG, India could race past China to become the world’s primary new consumer within five or seven years. For those claiming “the end of oil,” the truth is that the world’s most vital fuel has no material substitute whatsoever. Electric transport, for instance, is overly expensive here in the rich U.S., let alone for a still developing country where 70 percent of the people subsist on biomass. Dreaming of the same luxuries that Westerners enjoy, gas-guzzling SUVs now comprise 35 percent of all car sales in India.

About a year ago, I forget exactly when, I bought a new iPad Pro along with the latest generation Apple Pencil.

I love the iPad Pro for surfing the net but not much else. I thought it would be possible to use it for blogging, but it's not optimized for such, at least without a peripheral keyboard. So, I use is mostly for surfing.

It links perfectly and seamless with any number of BlueTooth speakers, that I have around the house. I learned recently that there is an "Alexa" app for the iPad and that, too, works great. I assume it's tied in with my monthly Amazon Music subscription. Doesn't matter to me one way or the other. Over the weekend I learned that there is a Kindle app that works on the iPad Pro and now I have downloaded the books I have bought from Amazon. Also, a subscription to a art/painting magazine to which my wife subscribes can be downloaded on the app. Awesome.

But I had forgotten about the pencil. Never used. Had completely forgotten I even bought it. While re-organizing the closet two weekends ago I stumbled across the unopened Apple Pencil box. Wow.

With the Daytona 500 postponed, and the PGA tournament a real bust, I had a lot of free time.

Daytona 500: after an incredible opening -- President Trump, grand marshal, and Melania, making a grand entrance -- folks disappointed that his limousine didn't take the 31° banks at 70+ mph -- the race went for 20 laps or so before it was postponed / rain delay.

PGA tournament: The host, Tiger Woods, placed dead last, #68 in a field of 68. And he was there by himself. Ryan Palmer placed #67; and, then three were tied at #64. Tiger Woods was +11 for the tournament, dropping five more in the final round. Adam Scott was the winner at -11 for the round.

So, I had a lot of time to play with the new Apple Pencil.

And then a couple of clicks later I had "Procreate" on my desktop. It's not quite as intuitive as I expected, but I found a great YouTube video to get me started, and after learning a few basics, I was in business.

Most amazing is the multi-finger "touches" that can do so much. "Procreate" calls them "power-moves." Also, the layering. Absolutely incredible.

I don't know if "Procreate" is the "best" app for such stuff, but Sophia is going to have a great time with this one.

The Apple Pencil also works with Apple Notes and I'm sure it works elsewhere.

One certainly doesn't need the Apple Pencil, but it sure is fun. I'm thinking I can use it for some of my graphics on the blog. We'll see.

Two EOG wells coming off confidential list this next week. Note the "chronologic" number for these two wells:

Other wells in the graphic:
Memo to self: link here.

Initial Production Data For Wells Coming Off The Confidential List This Next Week -- February 17, 2020

Wells Coming Off The Confidential List This Next Week -- February 17, 2020

Short shelf life: I may be wrong, buy my hunch is that a lot of "political stories" are going to have much shorter half-lives after the Mueller investigation (two years) and the impeachment (six months). Prior to these two events, the Roger Stone story might have had legs, lasting months. But my hunch is that the Roger Stone story is already over, except at anti-Trump cable network news shows. Do a word search for "Stone" over at The Drudge Report and the only hit is for The Rolling Stone Magazine.

Bloomberg: the videos suggest Bloomberg is much more vulgar and much more inappropriate than folks thought. Remember, he's a New Yorker, and spoke his mind. Tweets are one thing, but the videos that are being aired, are quite remarkable, to say the least.

Something worse than Trump? No, this is not from the Babylon Bee: link here. This is a US senator. Posted as a PSA -- summer is just around the corner, as they say.

Cheap oil: China is renting huge storage facilities in South Korea for all the oil they are buying -- never let a crisis go to waste. WTI at $52.10 today. In the sweet  sport for the US consumer. 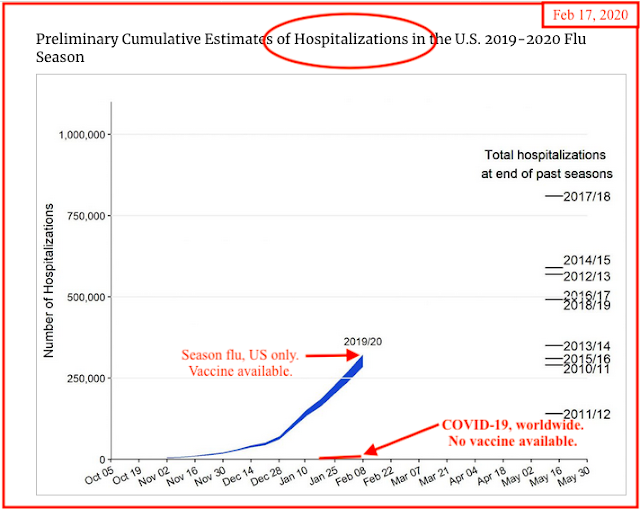 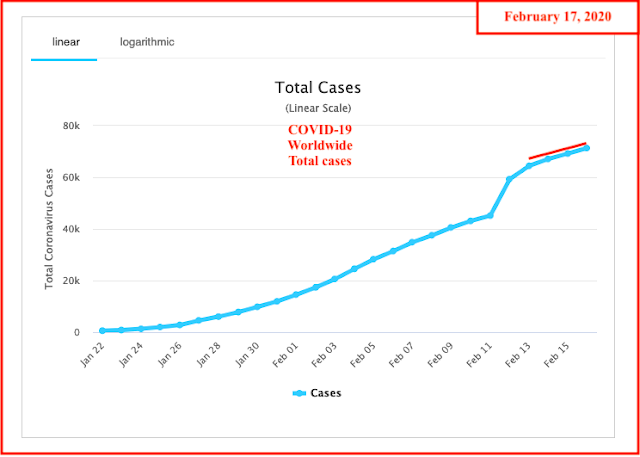 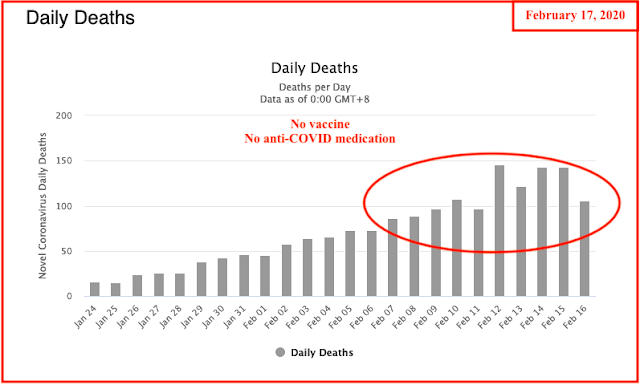 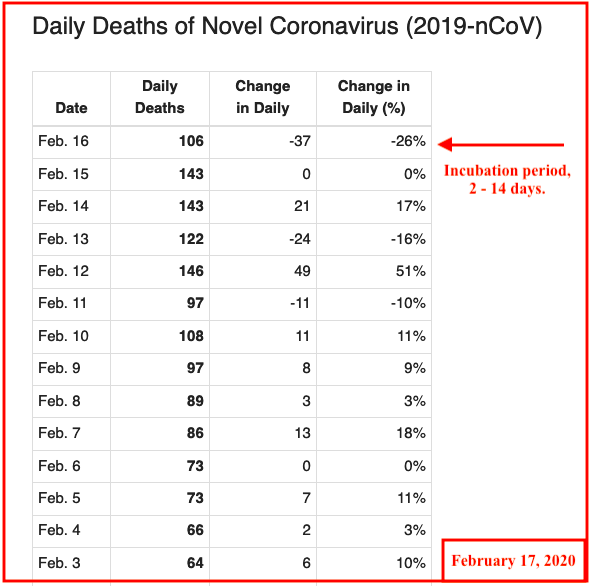 Posted by Bruce Oksol at 9:41 AM No comments: