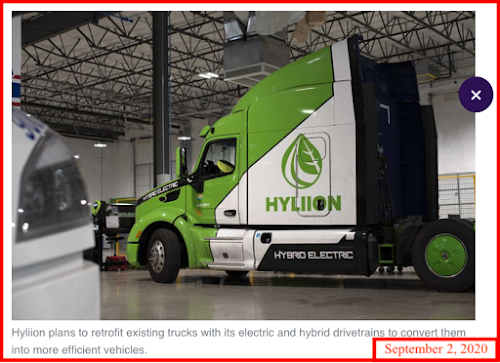 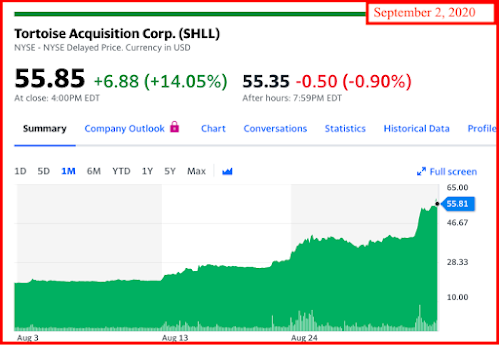 This will be the third misstep by Saudi Arabia since the advent of the Bakken revolution. The previous missteps:

Now, the third misstep: Saudi Arabia is delaying plans to expand at home and abroad due to:

Although they probably had no choice this time.

This story was previously posted -- just the headline -- but here's the story and the source, The WSJ. The numbers show just how badly things are going for Saudi Arabia right now, although this has gone on for much longer than just the last few months. Long-time readers will remember Saudi's plans for huge a huge renewable (solar energy) some years ago, but was canceled, due to the incredibly high cost. Anyone remember Paddy?

The linked article will be behind a paywall but probably accessible through various methods. Be that as it may, from the article at the link:

Saudi Arabia’s state oil giant is reviewing plans to expand at home and abroad in the face of sharply lower oil prices and a heavy dividend burden it assumed as part of its recent initial public offering.

Saudi Aramco is now slowing down and reviewing a $6.6 billion plan to add petrochemical output at its Motiva refinery in Texas.

It is also reviewing a big natural-gas project with Sempra Energy SRE 1.88% in the same state, and pausing investments in refineries in China, India and Pakistan.

At home, Aramco is delaying by a year plans, announced in March, to boost crude production capacity to 13 million barrels a day, from currently about 12 million.

In its December IPO, Dhahran-based Saudi Arabian Oil Co. promised shareholders $75 billion in annual dividends for the next five years. That pledge helped persuade private investors to pay a premium for the thin slice of Aramco shares the government floated on the local stock market. Other big oil companies, such as Royal Dutch Shell PLC and BP PLC, have cut their dividend in recent months to preserve cash, amid sharply falling oil demand and prices thanks to the pandemic.

Aramco’s flexibility to do the same is limited because the Saudi Arabian government—which still owns 98% of the company—relies on Aramco dividends for much of its funding.

Last month, Aramco said it would maintain its quarterly dividend at $18.75 billion, dwarfing free cash flow of $6.1 billion for the period. That was down from $20.6 billion a year earlier, when oil prices were higher. It also reported a 73% fall in net profit in the second quarter and said it would cut capital expenditures by about half, to between $20 billion and $25 billion. The spending will target domestic crude production, it said. That is a sizable turnaround from two years ago.

At the time, Aramco laid out plans to invest $100 billion in chemical manufacturing, and unveiled a separate ambition to buy as much as $160 billion in natural gas assets. The company said it wanted to become a competitor in the global natural-gas market and also balance its giant oil-production capacity with the ability to process crude into other products—a diversification strategy employed by most of the world’s biggest oil companies. As part of this push, Aramco paid $69 billion to buy a controlling stake in Saudi Basic Industries Corp., or Sabic, the kingdom’s biggest petrochemicals company. It also paid $1.2 billion for a stake in South Korean refiner Hyundai Oilbank in December. The Sabic deal sharply expanded debt at Aramco after it consolidated the petrochemical company’s liabilities.

Much more at the link. Archived.

Posted by Bruce Oksol at 9:34 PM No comments:

Biggest rally since 1938 -- CNBC senior financial analyst but that was said back in April, 2020, also.

Fortune headline: the market's rally is this close to becoming the "greatest of all time."

The two words I keep hearing from "analysts" over at CNBC:

I don't know when I first heard them use these two words, but the use of both words seems to be fairly recent, within the last week or so.

It is interesting. I can understand the hesitation in calling this a "bull market." 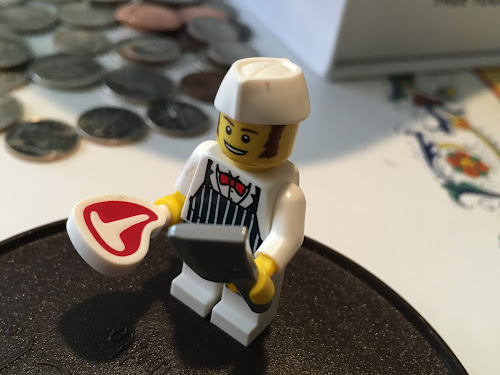 The butcher.
Posted by Bruce Oksol at 5:57 PM No comments:

Of Hundreds Of Food Items At Our Local Costco, Only One Is Reported Out Of Stock: Spam -- September 2, 2020

Of the 1,000's of line items at Costco, our local store reported six items out-of-stock today: 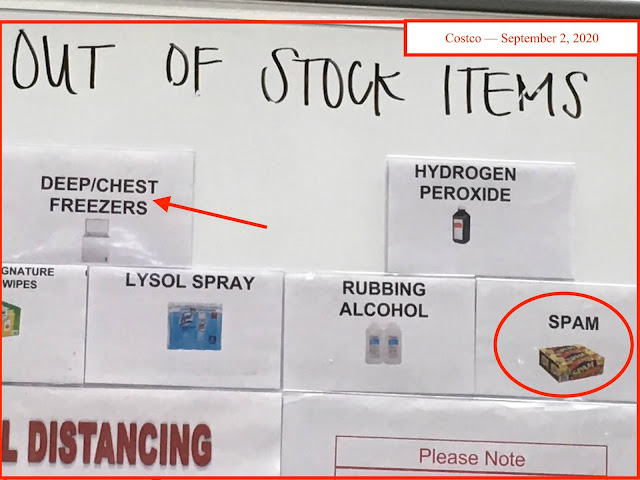 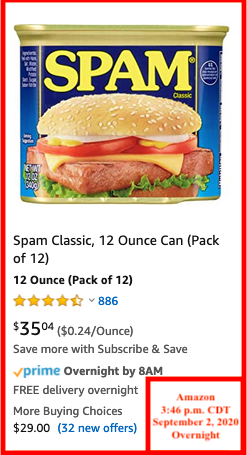 Think about that: cutting upwards of $10 billion in capex projects (seed corn) just so they can maintain that $75-billion dividend payout each year. The prince must be going nuts.

And will their plans to delay an increase in production help support the price of oil? In a word, "no."

No swimming today. Raining since last night; more forecast for today and it's pretty cold out there right now, 72°F.

Dallas-Ft Worth area: Covid-19 risk lowered from "red" to "orange" as number of cases continues to decrease.

Xilinx: over at SeekingAlpha. Archived. 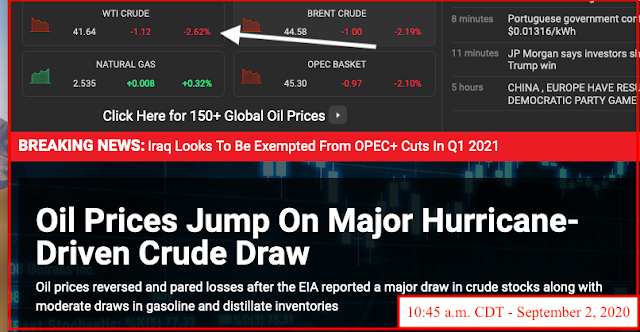 Venezuela: oil production could go to zero. Consider the source. A reader brought this article to my attention; thank you. My reply:

This is a very, very interesting story. Of course, it was a number of factors that drove this, but at the end of the day, China, Saudi Arabia, Canada, Mexico, and the US are all benefiting from this development. I think there is more concern that Venezuela will someday get its act together and actually start producing oil in large volumes again. Truly amazing.