Highlight Of The Day -- Spotting A Squadron Of Mississippi Kites Soaring And Circling Above DFW -- November 19, 2020

I may or may not have seen them before but this is the first time I recognized them and identified them on my own.

Mars is still way "behind" / "trailing" Jupiter and Saturn. Wow, Sophia is teaching me a lot.

You Only Live Twice, Nancy Sinatra
Posted by Bruce Oksol at 9:36 PM No comments:

From the NDIC December, 2020, hearing dockets, this is a case, not a permit: 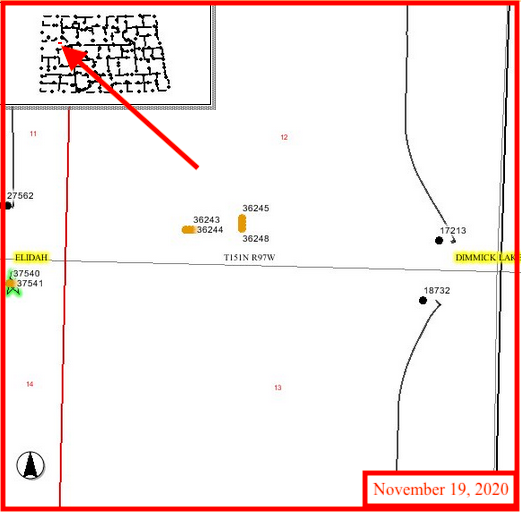 A reader notes that the eight wells in the graphic immediately above may be spaced at 2560-acres.

We've seen this before:
From "completion strategies, 2020":

Reproduction Numbers, Herd Immunity, And All That Jazz -- November 19, 2020

Now, go back and take a look at this post regarding production numbers:

The basic reproduction number, R nought (R0), is defined as the average number of secondary cases of an infectious disease arising from a typical case in a totally susceptible population, and can be estimated in populations if pre-existing immunity can be accounted for in the calculation.

R0 determines the herd immunity threshold and therefore the immunization coverage required to achieve elimination of an infectious disease.

As R0 increases, higher immunization coverage is required to achieve herd immunity. In July, 2010, a panel of experts convened by WHO concluded that measles can and should be eradicated. Despite the existence of an effective vaccine, regions have had varying success in measles control, in part because measles is one of the most contagious infections.

In that second link, it was stated:

The reverse: as the R0 decreases, the lower the immunization coverage is required to achieve herd immunity.

Not enough folks are talking about this.

I'm getting the feeling even Dr Faust has missed this (or deliberately ignoring it). Even at 90% vaccination rate he said that we still need to wear masks and distance ourselves socially forever and ever.

From wiki and various other sources, generally-agreed-upon reproduction rate numbers:

An aside: even before the vaccine, there were studies that suggested smallpox was dying out on its own.

So, "we're" all assuming that we need 70% penetration to effect adequate herd immunity when it comes to Chinese flu.

"We" were told that 70% immunity was adequate for the childhood diseases, like measles, chickenpox, and polio.

That brings me back to North Dakota: 8% penetration vs 3% for most of the nation. North Dakota ranks first in penetration. South Dakota is second at just below 8%. Hmmm....

Case rate across the US is about 3% -- the number of Chinese flu cases per one hundred subjects runs about 3.

Spanish flu died out on its own; researchers do not know why. Was herd immunity reached at 33%?

The effective reproduction number (the average number of secondary infectious cases produced by a typical infectious case in a given population) for the 1918 influenza virus was in the range 1.2-3.0 and 2.1-7.5 for community-based and confined settings, respectively.

Hmmm. Interesting. About the same as "seasonal flu" and almost right on the mark for Chinese flu.

Where do you target limited doses of the vaccine? Those most vulnerable and those living in high-density environments.

Rambling. This and 69 cents will get you a cup of McDonald's coffee via the drive-through.

Sophia's school is holding its annual frozen turkey drive. I'm off to the neighborhood grocer to buy a Butterball or two and drop them off at the school.

8:17 a.m. And I'm back. Success. Tom Thumb. Four turkeys. To Sophia's house for the photo op. And then to the school. 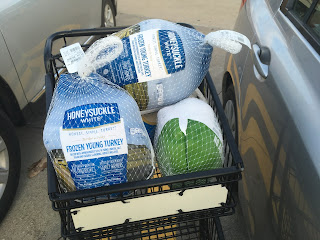 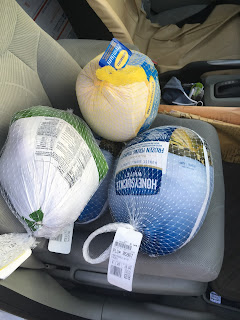 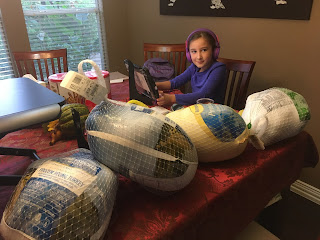 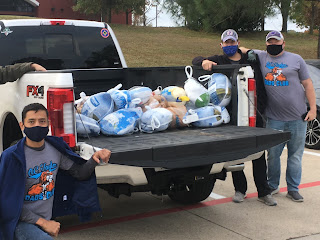 A long way to go but I was one of the first to drop off turkeys: 222 turkeys is the record, set last year. We'll see if the pandemic has affected the drive.

Now, I won't feel so guilty about having a donut for breakfast. LOL

I didn't capture the weight of the four turkeys, but the ON (an organic) turkey was about 10 lbs; the expensive HS turkey was close to 20 pounds. I assume other four were about fourteen pounds each.

The HS turkeys were almost sold out. Plenty of Butterball were left.

BLM: I avoided this story for several days; finally read it. Glad I did. Raptors #23 -- same number as that of our granddaughter, the soccer player.

Apple: and yet another review raving about the new Apple MacBoo Air (M1,2020). This is truly amazing.

Finally a good match up tonight.

“Ratings have dropped for all 11 NFL games on NBC this season, with viewership down for all-but-one,” SMW reported.

Meanwhile, ESPN’s Monday Night Football averaged 11.45 million viewers and was the series’ second-best Week 10 audience since 2015, it was still down 28 percent over last season.

However, the Seahawks-Rams and Bengals-Steelers games on Fox lost twenty percent and 13 percent respectively. As to CBS, its Bills-Cardinals game was off 35 percent.

And this is when sports enthusiasts have little to watch.