Huge US Infrastructure Program About To Commence -- "Stock Market" Has Taken Notice -- September 10, 2017 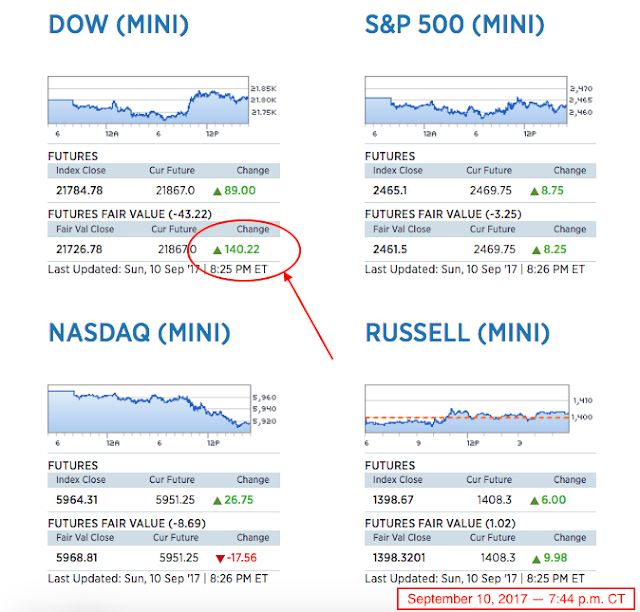 Maybe futures look so good because North Korea apparently did not test another nuclear weapon or launch another ICBM as they had said they would do this weekend.

But having said that, futures are up significantly, despite:
On the other hand, I haven't seen anyone really talk about the huge US infrastructure program that is about to commence. This was a huge campaign promise by Donald Trump: a huge infrastructure program. Congress never could get around to it and nature did what Congress could not or would not. Hurricanes Harvey and Irma are going to result in two of the biggest infrastructure programs in the history of the US. Recovery efforts have already begun in Texas and by this time next week recovery efforts will be well along in Florida.

Note disclaimer above: it's hard think that the following are not going to benefit to a great degree from the hurricanes:
So, most of Trump's campaign promises are coming to fruition:
And if the Dems follow through with their plan to do away with the "debt limit" law permanently, Trump is going to have an endless amount of money.

Disclaimer: in a long note like this and a lot of data to look at; and the same thing for two other posts linked to this post -- there are likely to be typographical and factual errors. I may be seeing things that don't exist. I don't have any background, formal training or education in the oil and gas industry. I'm only posting this to help me better understand the Bakken. If this information is important to you, go to the source.

I think folks who have followed the Bakken closely will enjoy looking at these MRO wells in Reunion Bay oil field.

However, several wells were fracked in 2017 just before the production jumped in this older well.

Below the graphics are some things to notice about these four wells. 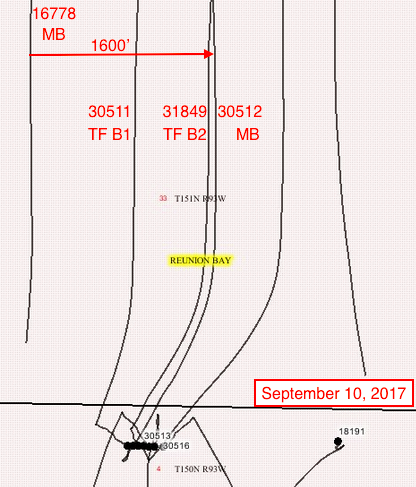 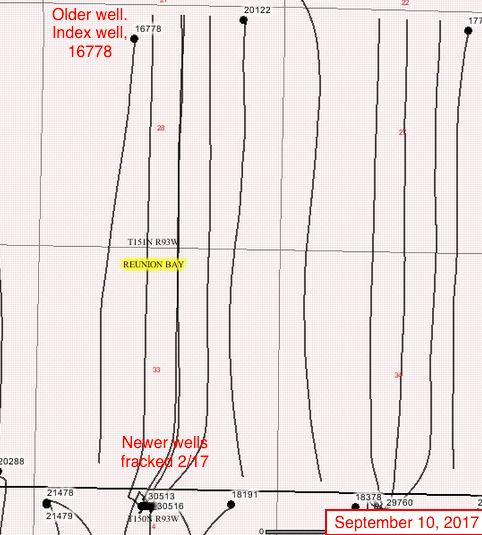 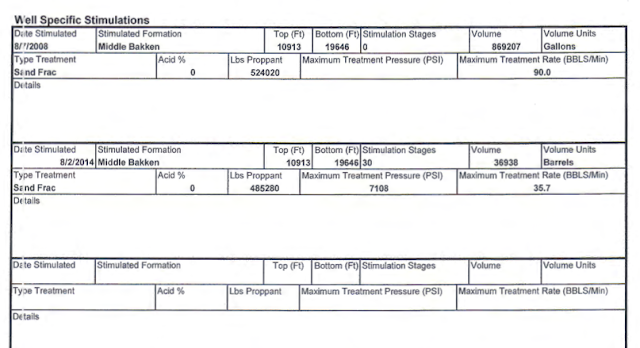 2. The wells run heel-to-toe and toe-to-heel: the older well runs from the north to the south. The three newer wells from the south to the north.

5. Look at the production in the older middle Bakken well. Its jump in production in 2017 (not fracked) was significantly more than the production back in 2008 when it was first fracked. Think about that and the "pressure issues." Remember, in 2017, this well had already been producing for nine years.

6. MRO was the first Bakken operator to talk about re-fracks. Under Mark Papa, EOG thought it might be cheaper to simply re-drill new wells. That was many, many years ago.

7. I've long forgotten but I believe I posted on numerous occasions that radial effectiveness of fracking extends out 500 feets.

8. Early on there were discussions regarding communication between the middle Bakken and the Three Forks formations. I have no idea where those discussions stand today.
Posted by Bruce Oksol at 7:25 PM No comments:

These are deposits only; not total assets. 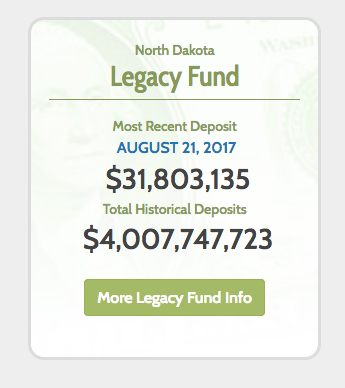 Topped $4 billion in total assets one year ago.
Posted by Bruce Oksol at 10:04 AM No comments:


Don't Mess With Walmart. Friday afternoon I caught less than 45 seconds of a heated discussion by the CNBC traders talking about the retailers -- Walmart, Target, and Amazon. Since I missed the first part, I had no idea what they were talking about. It turns out they were "discussing" investment in the retail sector after Target mentioned that it was going to "slash prices on thousands of items."

Following that announcement shares in TGT dropped about 2%, I believe. Here's the story, over at CNBC.

Two thoughts: when it comes to pricing in this sector, you take on Walmart at your own peril. Even if they don't have the lowest prices on absolutely everything on any given day, the perception is that they do.

However, it seems that among Amazon, Target, Walmart we've moved beyond pricing. Maybe a tagline at the end of every commercial reminding folks of their low prices is in order, but an emphasis on convenience, customer service, advantages, etc. needs to be emphasized. My wife, in a million years, would never think of becoming an Amazon Prime member, but she's an avid watcher of many different television series, many of which she misses when they are first aired on television. It is not uncommon for her to find them streaming on Amazon Prime -- for free -- and now she really, really appreciates "our" Prime Amazon membership. 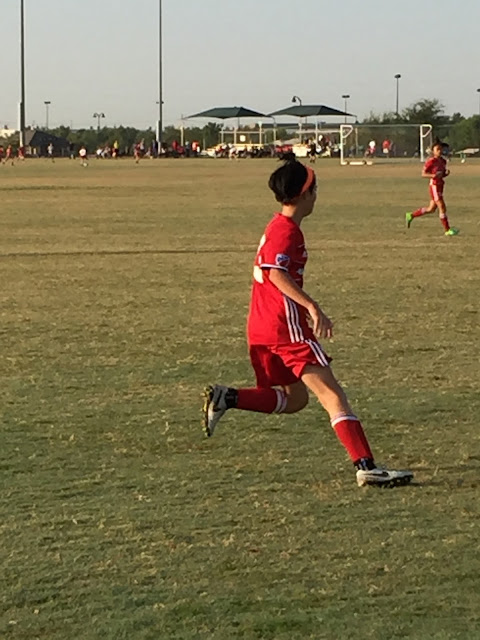 Middle granddaughter, Saturday, September 9, 2017.
Posted by Bruce Oksol at 8:51 AM No comments:

No más! Denmark agrees with Trump -- enough is enough. Denmark suspends refugee resettlement under UN program. The country will decide on its own on a yearly basis what's best for the country.

They can run, but they can't hide. From The LA Times:


U.S. officials say Islamic State has lost 60% of the territory it captured in 2014, and its force has been halved to about 15,000 fighters. The recent intelligence indicates that they are concentrating forces and shifting their operations base to the Middle Euphrates River Valley, which lies between Iraq and Syria.

An estimated 8,000 fighters have moved to the valley, which stretches more than 150 miles from Deir el Zour in eastern Syria down to Rawa in western Iraq. They include most of the group’s leaders and their families, as well as key aides for administrative functions.

A U.S. special operations task force tracked and killed three leaders, who allegedly oversaw weapons research and drone operations, in the valley this week, officials said. In all, more than 35 military commanders, weapons production experts, financial facilitators and external attacks plotters have been killed there in the past year.

Islamic State founder Abu Bakr Al Baghdadi is believed to be hiding in the area, said Lt. Gen. Stephen Townsend, who completed his tour this month as top commander of U.S. forces in Iraq and Syria. He predicted the militants would make their “last stand” in the valley.

NPR gives all the credit to the Democratic leadership. President Bill Clinton was said to have been a genius at triangulation. But the credit for the deal to raise the debt limit, provide aid for Hurricane Harvey, and prevent a government shutdown -- all accomplished in two days -- apparently belongs to the Democratic leadership and not to the president. At least according to NPR this morning. And so it goes.
Posted by Bruce Oksol at 8:28 AM No comments: