The big news today out of DC:
I did not read the story, but I assume it has to do with electricity demand.

Is anyone paying attention?

Reminder: a great interactive site, US electricity demand.  About 5:30 p.m. both days:
And cardigan sweaters during the winter?

Bottom line: global demand for crude oil was revised upward for 2018, and global demand will continue to increase through 2020, according to latest reports from OPEC.

Pay particular attention to this:
The reader who noted that, also noted this:


It should be noted, that to the best of the writer's knowledge, no one is reporting that OPEC supply in July, 2019, was two (2) million bopd less than global demand.

That was a couple of days ago.

Today, the reader provided an update and a likely explanation for the "2 million bopd" figure. From the reader today:


I now understand why no one had that 2 million barrel shortfall that the OPEC report revealed. Whoever wrote the demand summary for OPEC started with a big misdirect that was picked up by the media, who have press deadlines to meet & who thus don't have the time to dig through a hundred pages of tables ... below is the note Reuters picked up that OPEC demand intro and came up with a headline that read:

OPEC sees bearish oil outlook for rest of 2019, points to 2020 surplus despite an upward revision to demand. Nick Cunningham at Oilprice did the same thing, called the OPEC report bearish.

The key thing to look at is the revision line on the demand table: https://rjsigmund.files.wordpress.com/2019/08/july2019opecreportglobaloildemand.jpg.

This is the explanation in greater detail:


What happened here is that whoever wrote the OPEC summary misstated what the data showed.

The Reuters article reads "the Organization of the Petroleum Exporting Countries cut its forecast for global oil demand growth in 2019 by 40,000 barrels per day (bpd) to 1.10 million bpd and indicated the market will be in slight surplus in 2020."

Since that didn't fit anything I saw when reading the report, I went back and found the summary that Reuters referred to.

On page 43 of the OPEC report, the first line of their demand summary says

The table on the same page shows the data, which I've already written about (see link to the table above);

Everyone who is writing about the OPEC report is taking that downward revision of growth to mean reduced demand, which is not the case. In fact, third quarter demand was revised 0.08 mb/d higher and came in 1.98 mb/d greater than July's global output.

Comment: I see this often: folks confusing "growth" with "demand" when looking at these reports.

This gets deep into the weeds but it's important enough on many levels to deserve a post of its own.

I get it. I wouldn't have figured it out on my own, but I get it. Because I've made that same mistake.

By the way, on another note, I pretty much ignore prognostications regarding crude oil demand put by out OPEC.
Posted by Bruce Oksol at 10:24 PM No comments:

Email ThisBlogThis!Share to TwitterShare to FacebookShare to Pinterest
Labels: PeakDemand

Readers of the blog have been talking about this for years. An economist finally noted the phenomenon.

This is the best example for a nominee for the Geico Rock Award. I only feel badly because this is not the only "economist" who should be nominated.


Heritage Foundation chief economist Steve Moore reacted to the high numbers of New Yorkers who are fleeing to Florida because of high state taxes.

“This is the big demographic story of our country that may be the biggest economic story,” Moore said."

He said there are “four states of the apocalypse” – New York, New Jersey, Connecticut, and Illinois – which have the most residents fleeing over high taxes and huge budget problems.

They are leaving for Florida, Tennessee, Texas, Utah and North Carolina.

“You can buy a house just with the money you save on income taxes,” Moore noted.

A bump in moving activity started with the federal tax overhaul in 2017. Although rates were cut for corporations and individuals, the ability of residents to deduct state, city and property taxes from their federal returns in places like New York, New Jersey, and Connecticut was diminished.

The exodus began well before the 2017 tax law.
Posted by Bruce Oksol at 9:40 PM No comments:

"Surprise crude oil draw fails to lead WTI higher." -- oilprice.
I can't get too excited about this; would this really move the needle? Nah....
Posted by Bruce Oksol at 9:31 PM No comments:


The first US crude cargo originating from the new Cactus II pipeline loaded onto the Aframax Paramount Hatteras out of the Buckeye Terminal in Corpus Christi, Texas.

The Paramount Hatteras is currently stationary near GOLA after arriving there Monday. It's likely the ship is headed to the terminal to conduct a reverse lightering job for a VLCC set to export.

".... soon be the first in the Port of Corpus Christi to export these barrels transported to South Texas via one of three large Permian long-haul pipeline projects," ...

On August 12, Trafigura announced in a press release that the 670,000 b/d Cactus II pipeline began service to Ingleside, Texas. Cactus II service to Corpus Christi is expected to start in the first quarter of 2020.

1,494 oil and / or natural gas wells on the confidential list in North Dakota. Link here.

If 850 wells are drilled/completed/brought into production each year in North Dakota, 1,494 wells on the confidential list representate about two years worth of inventory.

Oilprice has still not reported that North Dakota set a new crude oil and natural gas production record in June, 2019. The story does not fit their "oil peak" narrative. LOL.
Posted by Bruce Oksol at 12:15 PM 10 comments:

Email ThisBlogThis!Share to TwitterShare to FacebookShare to Pinterest
Labels: ConfidentialList

In The Big Scheme Of Things, Weekly Changes In The Rig Count In The Bakken Don't Matter -- August 20, 2019

Idle rambling before I call it a day.

Back to my "rigs don't matter."

I think there's a corollary to this theme.

Having grown up in a conventional oil play, the Williston Basin, 1951 - 1969, it was my worldview (myth) that a few vertical wells were drilled every year; some years there were more wells drilled (a mini-boom) and then many years just a few wells drilled.

Once these wells were drilled (no fracking), a pump was placed on the well, and the wells simply pumped day in and day out. Occasionally, very occasionally, one might see a work-over rig but the work-over rigs were rare enough in the Williston Basin, 1951 - 1969, that we actually commented on them if/when we saw them.

We would see occasional oil trucks of some nature, and occasionally we would see a seismic crew with several trucks, but that was about it. Day in, day out, pumps pumping, but not a lot of activity once the wells were drilled, 1951 - 1969.

The Bakken boom, the shale revolution, is completely different.

Wells have become centers of activity. Unlike the conventional wells, the current horizontal fracked wells are a bundle of activity.

Shut in (DUCs) for up to two years.

Sand. Fresh water. Trucks, trucks, and more trucks. One can pipe fresh water to wells for fracking, but one can't pipe sand to pads (at last not yet). More work, more people.

While neighboring wells are fracked, older (producing) wells are shut in (which requires human resources).

And, over and over, and over.

But then, the Bakken well becomes a beehive of activity over the next ten, twenty, or thirty years. Impacted by neighboring wells; work-overs; mini-re-fracks; major re-fracks.

Now, one Bakken well in any given section is going to lead to pad drilling: four wells, eight wells, twelve wells, or more.  And they all produce a lot of natural gas over time generating more work for more folks.

And with all this activity: a typical Bakken well is going to "see" a drilling rig for seven days during those 35 years.

And we haven't even started to discuss EOR.

I consider it a much better situation if the number of rigs drop to 30 or 20 or even 10 if production in the Bakken continues to set new records. Or if producers are meeting their production goals. CLR with its Long Creek Unit plans to drill 56 wells over the next two years with two rigs.

850 wells drilled/complete/brought on line each year divided by 56 wells = 15.

Something will be drastically wrong if the rig count needs to go back to 200 to maintain production.

These wells are all off line for operational reasons: neighboring wells recently fracked --

Two wells have just come off line and there is no neighboring activity. 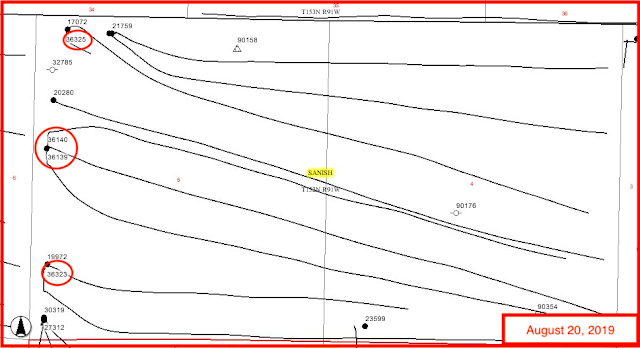 Wow, how many remember this story -- the sale of RVs point to "recession right around the corner"? That was posted back on July 27, 2019, linking a zerohedge story which I blew off as crazy. Apparently they're reading zerohedge or the blog over at The Wall Street Journal, link here.

Elkhart, Ind., is flashing a warning sign about the economy.

Capital of the country’s recreational-vehicle industry, the northern Indiana city and the surrounding area are watched by economists and investors for early indications of waning consumer demand for luxury items, often the first sign of economic anxiety.Shipments of recreational vehicles to dealers have fallen about 20% so far this year, after a 4.1% drop last year, according to data from the RV Industry Association. Multiyear drops in shipments have preceded the last three recessions.

“The RV industry is better at calling recessions than economists are,” said Michael Hicks, an economist at Ball State University, in Muncie, Ind. Mr. Hicks says softening consumer demand for RVs coupled with rising vehicle prices due to tariffs suggests the economy is either in a recession or soon headed for one.

"Yeah, I know. All that recession talk is crazy talk. My papa says we're doing just fine. He says to buy more Ford. What's a Ford?" 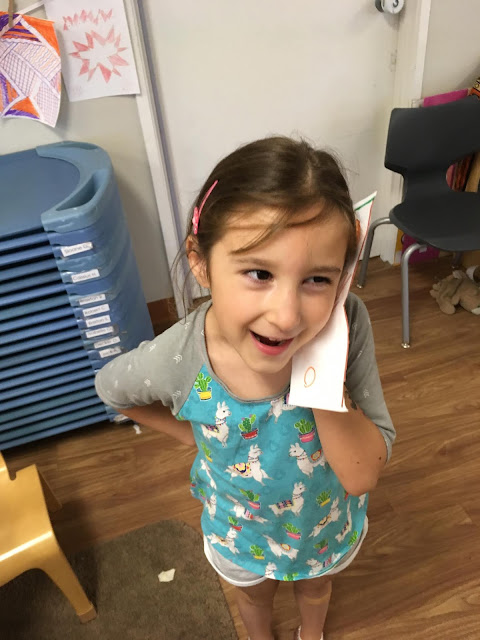 Note rig count: second highest count in past five years for this date.


Natural gas production in the U.S. Northeast has been increasing steadily through the 2010s and now averages about 32 Bcf/d — 12% higher than last August and nearly double where it stood five years ago — despite the lowest regional spot gas prices since early 2016. This run-up in production volumes wouldn’t have been possible without the new gas-processing and fractionation capacity that MPLX and other midstream companies have been bringing online at a steady pace in the “wet” or NGLs-rich parts of the Marcellus and Utica shales. Today, we begin a short blog series on recently completed and planned gas-processing and fractionation projects in the nation’s largest gas-producing region, and the gas production growth they will help enable.

Maybe ND officials should visit the Marcellus / Utica to better understand how to handle growing production of natural gas.
Posted by Bruce Oksol at 8:02 AM No comments: