Biden: gasoline prices won't be going down anytime soon. High prices are here into 2022 -- then, of course, comes the driving season. Link here to Irina Slav.

When I see headlines and one-liners like this I know exactly how this evolved. At his daily briefing by his staff, Resident Biden was told exactly that and that's what he passed on to the rest of us. I assume Resident Biden comes away with twelve one-liners / twelve single soundbites that he can remember about the US economy and global geopolitics on any given day.

High prices: I use the phrase "high prices" loosely and only in line with the meme. In fact, I don't see $80-oil all that expensive and if one looks at historical prices adjusted for inflation $80-oil is definitely not out of line.

Posted by Bruce Oksol at 2:12 PM No comments:

In Key West, a little bit after midnight, everyone starts telling you they know Jimmy Buffett, but a little after 3:00 a.m. they will tell you they know Jerry Jeff Walker.

Jerry Jeff Walker had gone down there  ... his best friend at the time, Jimmy Buffett who was then dropped ... or just burned out .. JJW sent JB down to Key West and the rest is history.

JJW drove JB to Key West in an old Packard.

I've never been to Key West but it holds for me quite a fascination: Jimmy Buffett, Ernest Hemingway, Donald Trump (up the coast), and then the above.

The tribute to Townes Van Zandt "connects" a lot of these folks, like Guy Clark, Susan Clark, Willie Nelson, Emmylou Harris, Nancy Griffith. When one looks at the map of Key West it reminds me of Provincetown, MA, and to some extent, San Pedro, CA. In all three cases, they are all destinations; one does not drive "through" any of them. When you reach any of the three, you've come to the end of the line.

The market: if it weren't for a few stories like SNAP and INTC, this market would be flying high today. Watching the crawler is incredible.

Apple: Amazon has already lowered the price of one of Apple's brand new MacBook Pros. Amazon is selling the $1,999-14"-MacBook Pro for $1,945. Expercom has a similar sale, but Amazon has a bigger reach. Amazing.

Quarter moon in a ten-cent town. Painting for the EmmyLou Harris album is by Susanna Clark. She also did the cover for Willie Nelson's Stardust album. Dies at age 73, July 5, 2012.

Speaking of Boston, need a song: the story takes place in San Francisco but for me it's my "Boston story":

Phunware: connected with Trump's SPAC. Up 1,000% before pulling back today.

DWAC: up to $103 now from $10 last night after multiple trading stops today. 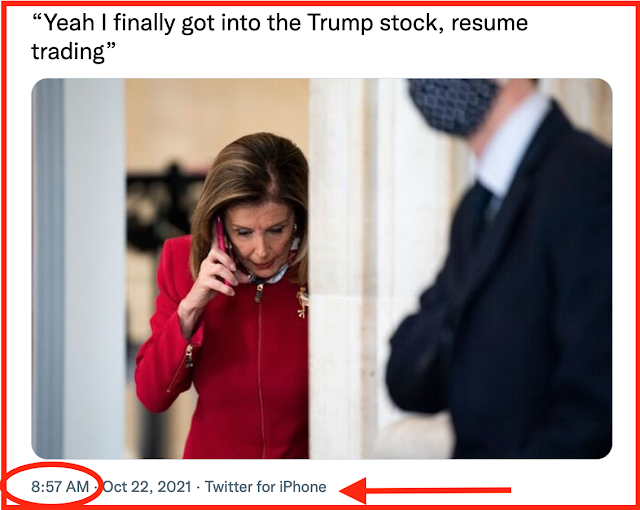 Spanish phrase for the day: esta mañana ("this morning") -- that's how our middle school principal opened his note to update parents and families on the lock down situation at the school earlier today.  All students are safe; the "event" is over; suspects in custody; students and teachers did not miss a beat. Local Texas law enforcement generally does not give lawbreakers "space" as they do in Baltimore.

Holy mackerel. I was gone all morning --- starting / continuing a special project for Sophia.

As readers know, in my blue chip portfolio, my favorite stock holding is SRE, my second, which I have not publicly stated before is UNP. Whoo-hoo.

I've accumulated so much UNP over the years I can retire a fourth time. LOL.

Seriously, what's going on here? I think I know. It will be mentioned in today's commentary if I ever get around to it.

Other news while I was out:

Here is the Jane Wells' interview I mentioned early. This might be the basis for my commentary later today if I ever get around to it. I don't like getting my news from video but in this case, an exception.

Trump SPAC: I don't know if you all heard but but trading in "the Trump SPAC" was stopped for a short while allowing federal congresswomen and US senators a chance to finish their business before taking a break. Link here.

Spare capacity: this corroborates my thesis that OPEC does not have spare capacity. From Josh Young over on twitter: it's almost list Kuwait doesn't have the spare capacity that they claimed they had. Link here. A thread worth reading.

Written by someone else I might have ignored it, but it comes from Yahoo!Finance' anchor, editor-at-large, "Tesla just did something stunning -- analysts." Link here.

Tesla's first quarterly earnings call on Wednesday night without CEO Elon Musk (by his own design) was as boring as watching a Pinto head down a quarter mile track for time.

But Wall Street pros say that the lack of Musk's presence didn't really matter, the more important thing is that Tesla continues to squeeze out more profits from each vehicle it makes.

The EV maker's profits topped expectations for the third quarter, powered by record deliveries. Third-quarter deliveries were driven by the more affordable Model 3 and Model Y vehicles. Together, these models comprised over 232,000 of the overall quarterly deliveries. But, quarterly sales came in short of consensus estimates as the top line was somewhat hindered by the semiconductor shortage.

Despite the revenue shortfall, Tesla widened its operating margin to 14.6% in the third quarter, versus 11.0% in the second quarter and 9.2% in the same period last year.

Tesla bulls on the Street quickly regained the narrative on Thursday after the stock initially came under pressure on the revenue miss. The stock rose 3% in afternoon trading in large part because of the impressive margin showing for the company.

Said Morgan Stanley auto analyst Adam Jonas, "Annualized 3Q EBITDA is approaching $13 billion… getting into GM and Ford territory magnitude, despite a fraction of the revenues. What’s particularly notable is Tesla’s margin performance despite significant cost inflation and a 6% reduction in ASPs [average selling prices] year-over-year." One analyst was so jazzed up by Tesla's margin performance and what it may mean for future profits, they think the stock has the potential to nearly double from current levels around $892. 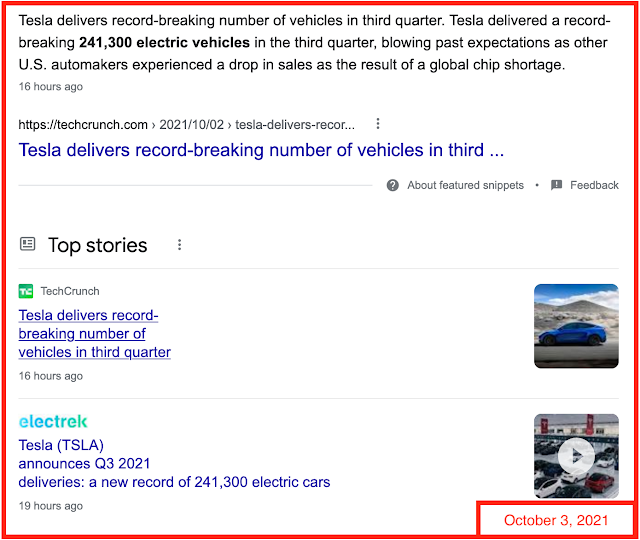 My condolences to those who were charging their Teslas overnight. 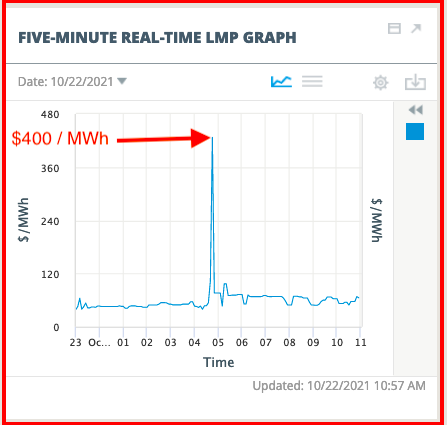 For seniors like me who grew up in Williston, ND, during the post-war boom years, it is surprising how "big" Williston has grown since then.

I've labeled seven areas where Williston has grown. If readers want to comment on any of these areas, that would be great. I assume there are a lot of stories. Comments are heavily moderated.

I was most surprised by Williston's expansion into area "7." 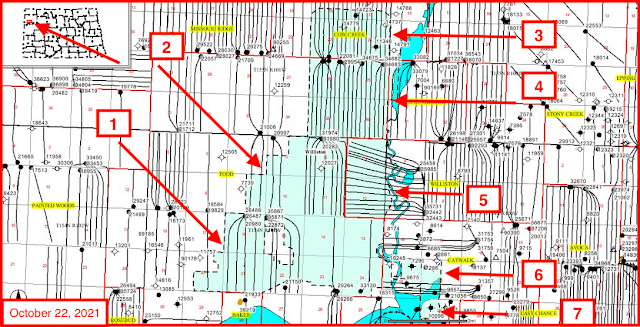 Look how far north Williston has expanded, sections 3 and 4.

Other graphics of the area: 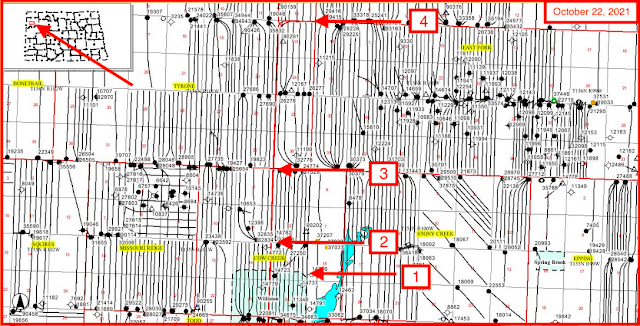 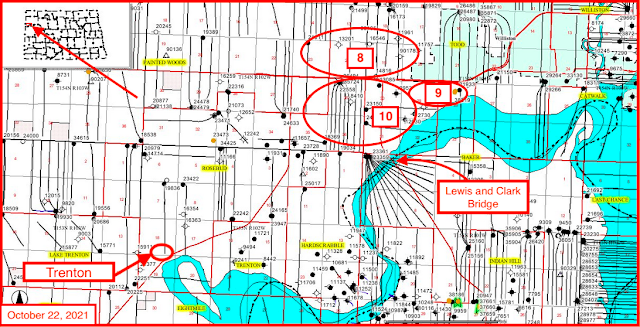 I hope the Jane Wells segment is available later on, on the net.

My first thought: anyone who was trained to use a forklift as a "side-job" while in the military or some other such entity has a job for life, and a very, very well-paying job. Right now, for a blue collar worker, put this at the top of your resume:

Back to Jane Wells. She has an amazing story.

Jane Wells is always good but today's report is perhaps one of her best. I really enjoy her. She projects that image that she "has a life" but every so often she goes out and about and posts a video story from southern California when the mood strikes her. She's worth her weight in gold.

CLR's Proposed Activity Under The River South-Southeast Of Williston -- October 22, 2021

Note: the graphic below is worth the price of the subscription for this blog.

Application of Continental Resources, Inc. for an order for the Catwalk, Last Chance, and/or Baker-Bakken Pool, Williams and McKenzie Counties, ND, as follows:

and such further relief as appropriate. 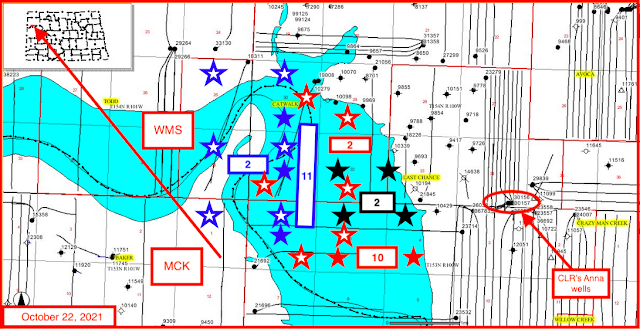 Opening gambit: it seems like Friday, today, is starting off slow, but something suggests that by the end of the day, could be a lot of news. Friday night news dump after 5:30 p.m. CT? I think SLB reports today. See sidebar at right for earnings post. At that site, calendar is linked here. Friday, today, a lot of banks and financial holdings will report. Others of interest to me

This all goes along with E&P not drilling a whole lot.

Spending bill: that seems to be weighing on the market.

Reuters, others: our economy can handle $100-oil.

Note: Turkey and Iran are damning the Tigris and Euphrates rivers -- Iraq, say what? How did that happen? LOL. From my Air War College days, three factors affect the geopolitics in the Mideast:

CNBC's best hour, looks like Jim Cramer has morning off:

Posted by Bruce Oksol at 8:17 AM No comments:

None of us knows with any certainty how big a role hydrogen will ultimately play in helping the U.S. and the rest of the world decarbonize. Sure, some true believers are convinced H2 is the next big thing, but even they must acknowledge the economic and other challenges associated with scaling up the production of “green” or “blue” hydrogen. Do we really want to devote the energy from thousands of wind turbines or many square miles of solar panels to produce relatively small volumes of green H2 from water via electrolysis? And is blue hydrogen — produced by breaking natural gas into hydrogen and carbon dioxide, then capturing and sequestering the CO2 — really a solution considering efficiency losses and the fact that only about 50% of the CO2 from steam methane reforming (SMR) units is actually snared? Which brings us to Air Products & Chemicals’ newly announced final investment decision (FID) on a $4.5 billion complex in Louisiana that will use a proprietary process — and not SMR — to produce what you might call deep-blue hydrogen and capture and sequester 95% of the resulting CO2. In today’s RBN blog, we discuss the project and its implications.

Posted by Bruce Oksol at 6:23 AM No comments: