US Migration; On A Per Capita Basis, Chicago Has Bragging Rights -- September 1, 2019 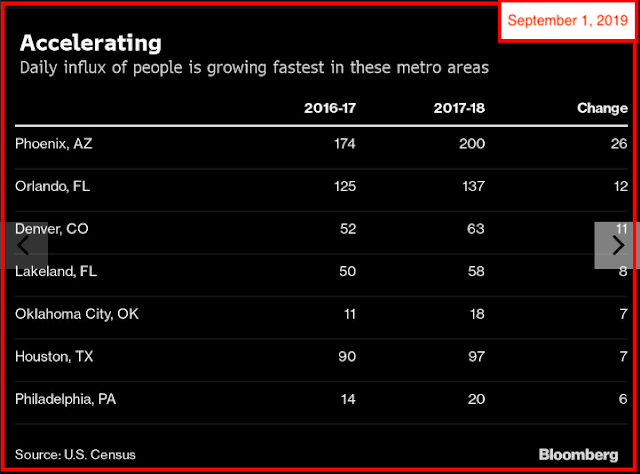 
New York leads all U.S. metro areas as the largest net loser with 277 people moving every day -- more than double the exodus of 132 just one year ago.

Los Angeles and Chicago were next with triple digit daily losses of 201 and 161 residents, respectively.

This is according to 2018 Census data on migration flows to the 100 largest U.S. metropolitan areas compiled by Bloomberg News.

At the other end of the spectrum, seven cities had on average more than 100 new arrivals every day. Dallas, Phoenix, Tampa, Orlando, Atlanta, Las Vegas and Austin saw substantial inflows from both domestic and international migration. Sun Belt cities Houston and Miami claimed the 8th and 9th spots in the ranking. Seattle was the only cold-weather destination among the top 10.

While New York is experiencing the biggest net exodus, the blow is being softened by international migrant inflows. From July 2017 to July 2018, a net of close to 200,000 New Yorkers sought a new life outside the Big Apple while the area welcomed almost 100,000 net international migrants.

The second most attractive locale for international migrants was Miami with an addition of 93,000, followed by Los Angeles, Houston, Boston and the nation’s capital, Washington D.C.

In raw numbers, NYC may be first in terms of out-migration, but "per 100,000" population, Chicago is more than double that of NYC.


While New York is experiencing the biggest net exodus, the blow is being softened by international migrant inflows. From July 2017 to July 2018, a net of close to 200,000 New Yorkers sought a new life outside the Big Apple while the area welcomed almost 100,000 net international migrants.

So, who moves out of NYC, Chicago? Those who can afford to move, i.e. those paying taxes. Who are moving into NYC? Well, according to the article, international migrants. You know: the ones who have million-dollar incomes and paying taxes. LOL. 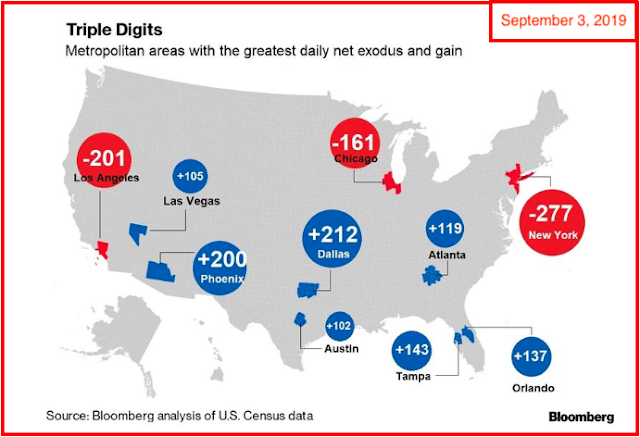 Note: September 2, 2019 -- "those not paying attention are missing an investing opportunity of a lifetime."

Beef: this is one of many stories suggesting the US beef story is likely to get better, much better, especially in Asia. From The WSJ: ravenous China could spice up US meat stocks.  Connect this with the China pork story, from the linked article:

The reason: The enormous pork shortage is sucking meat into China at an astonishing rate. Total meat imports in July were $1.7 billion, up close to 90% from the year before.

Boeing. Tracked here. Back on July 14, 2019, it was thought by some that the MAX 737 groundings could stretch into 2020. FAA now says they could wrap up their review in the next "few" weeks. From Reuters:

Warthog: gets $1 billion to keep the A-10 flying. According to The Motley Fool  the Congressional "bone" to Boeing regarding the Warthog three years ago was a "windfall." Now The Motley Fool says:


The A-10 news got 10 times better for the aerospace giant.

XOM: Motley Fools -- if you like dividends, you should love XOM.

OXY: Simply Wall St -- OXY delivered a better ROE than its industry -- an 18% return on equity. that should take a bit of pressure off Vicki Hollub.

Camille Paglia: a feminist capitalist professor under fire -- WSJ. Her ancestry must include a bit of French. French speakers use the name "Camille" for both males and females. Interestingly enough, Ms Paglia describes herself as neither male nor female, or as both male and female.

Continuing: these were added September 2, 2019:

I quickly checked in on The Weather Channel. Their ratings for the weekend must have plummeted:
So, we move quickly over to TCM. And I kid you not: the 1945 movie, "The Picture of Dorian Gray."

I've never seen the movie. In fact, I don't recall if I ever even knew there was a movie. But now I will watch the ending.

[Later: perhaps most enjoyable -- seeing the various types of horse-drawn carriages. I remember first learning about English  carriages when I read Black Beauty to Arianna many, many years ago. I am now reading that book to Sophia.]

I never read Oscar Wilde's novel until just a few years ago, not more than three years ago. I see it was on my nightstand -- which means I was reading it -- on April 16, 2017. I finished it; a great read. I see that it is now packed away. Ready to be donated.

[Later: it only gets better. On "Hurricane Dorian" weekend, TCM started out with "The Picture of Dorian Gray" and will now follow it with "Lifeboat." The latter is a Hitchcock classic. I've seen the movie; can't recall if I've read the book. Probably not.] 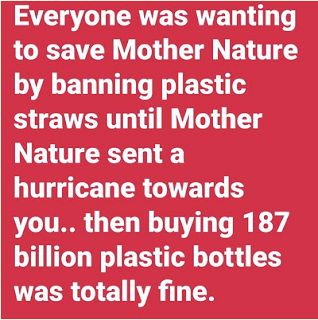 The flank steak grilled directly on charcoal turned out incredibly well yesterday. Again: 90 seconds directly on the charcoal, then wrapped tightly in heavy aluminum foil for fifteen minutes. My wife found it hard to believe that the almost one-inch thick steak was on the charcoal for only 90 seconds. I forgot to take photographs. Both my wife and I agreed that the flank steak was less flavorful than skirt steak, but it was still incredibly good. I had used a pecan rub on the flank steak; no rub on the skirt steak, only Australian flake sea salt. The flank steak being about twice as thick as the skirt steak seemed better suited for grilling.

Newport: bottom of the butt of the cow; tri-tip; 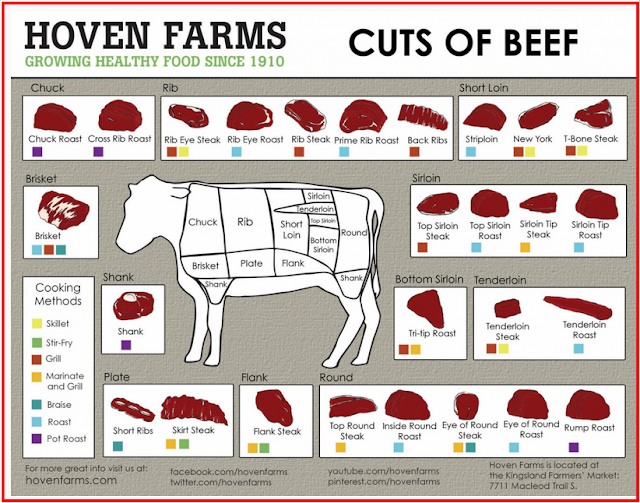 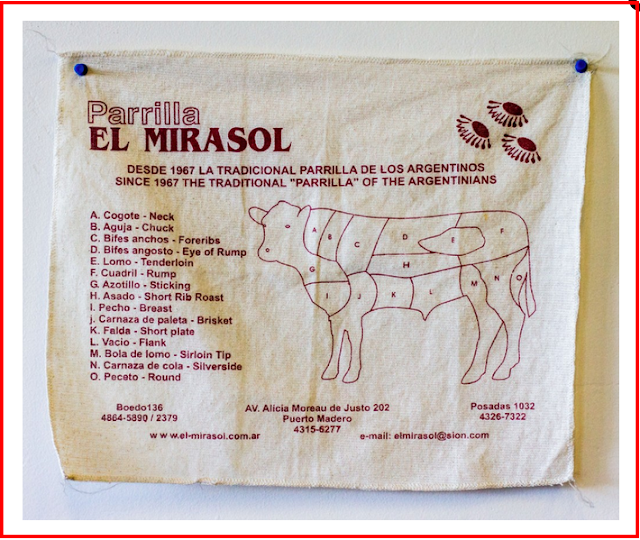 
Denver steaks are one of the increasingly popular cuts of meat that come from the beef chuck primal cut, which is known for rich roasts but also produces some lesser well-known steaks.

Denver steaks are relatively tender, with nice beefy flavor, and they usually feature a good amount of marbling.

As long as they're trimmed and sliced properly, Denver steaks are great for cooking on the grill.

What Is Denver Steak? Denver steaks are made from the serratus ventralis muscle, which comes from the under blade portion of the chuck roll. The beef chuck is the shoulder of the animal and it gets a lot of exercise. That means most of the muscles in the beef chuck are pretty tough.

The serratis ventralis, however, is one of the exceptions; it's situated directly underneath the shoulder blade bone and doesn't get used much. This makes it one of the more tender muscles in the beef chuck.

Serratus ventralis also happens to be one of the major muscles in the classic 7-bone chuck roast. The only difference is, in a chuck roast, you're getting a cross section of the muscle; historically, an entire beef chuck primal would be cut into slabs on the meat saw and sold as pot roast.

To produce a Denver steak, the serratus ventralis is extracted all in one piece, which, to a skilled butcher, is more like surgery than carpentry. This technique came about to see if butchers could produce a higher value product from a low value cut of meat. The name "Denver" has no real significance and was chosen for marketing purposes only.