Link here. Also, archived here. Paywall; you may need to google the article.


Windblown dunes in west Texas are the latest front in the shale oil industry’s campaign to extract more barrels at less cost.

The industry is excavating dunes for frac sand, which is pumped into wells to crack open rocks and get oil and gas flowing. The deposits are in demand because they lie close by the hot Permian shale region, making them cheaper than sands carried in from older mines 1,000 miles away. Locally dug sand is influencing the economics of US oil production, helping shale supplies compete in world markets.

It is also worrying investors who own shares in railroads that haul sand and in sand miners that may be on the cusp of a glut. Sand was a critical ingredient of the shale drilling revolution. Without it, US oil production would not have nearly doubled in the past decade to an estimated 9.7m barrels per day.

Between 2012 and 2014, total US demand for “proppants” such as frac sand rose from 34m to 61.5m short tons, according to Rystad Energy, a consultancy.

Then oil prices collapsed, bringing down sand consumption as well. Volumes are again on the upswing as drilling accelerates, oil wells get longer and more sand is used per foot of well.

But this sand boom is different than the last.

In the first phase of the shale fracking boom, oil producers were notorious for prioritising production growth over investor returns. They sought premium sand supplies far from the oil patch in states such as Wisconsin. Its “northern white sand” was prized for hardness and roundness that made a porous latticework inside underground wells. But given its bulk, it also cost a fortune to ship. Northern white sand has averaged $41 per short ton at the mine gate this year, according to IHS Markit, but can cost $120 at a Texas well head after transport.

Cost-cutting among oil companies sparked a search for supplies lying around the Permian, known as brown sand. While finer in grain, it is also cheaper at $75-$80 per short ton at the well head, Mr Jacob says. Distances are short enough to make some deliveries economical by truck.

This is only a small part of the article; much more at the linked article.
Posted by Bruce Oksol at 10:52 PM No comments:

Flaring
US / BLM suspends flaring restrictions for one year

Before reading the post, some Mark Papa posts from the past:

Great article over at SeekingAlpha submitted by Richard Zeits. (If the link is broken, archived here.)
The article begins:


In this note, we offer for debate one of the most popular recent controversies: are the current commodity prices sufficient to support strong U.S. oil production growth in 2018?

We discuss some of the recent myths surrounding this issue and the reality the way we see it.

Now, I will provide some thoughts regarding the oil macro picture and relate them to the Centennial’s strategy. Many of the macro comments are simply a repeat of the comments I made on the earnings calls three months ago. Events have moved even faster than I predicted and reinforce my conclusions.

Oil markets have recently responded to the combination of high global demand, rapidly reducing crude and product inventories and tepid U.S. production growth. The last of these items is a most controversial and I would elaborate a bit on the logic regarding the tepid U.S. growth.

Based on monthly EIA numbers, U.S. oil production has been essentially flat for the past seven months and I expect 2017 year-over-year production growth to be 330,000 barrels per day, much less than early year consensus estimates of 700,000 to 800,000 barrels per day, even though the oil rig count is currently 900, an increase of 500 rigs compared to May 19, 2016.

Many people will describe the reason for this tepid growth to be cash flow or service company limitations, but I think it’s lack of remaining Tier-1 geologic quality drilling locations in two of the three major oil shale plays, the Eagle Ford and Bakken. Even in a constructive oil price environment, I expect that 2018, total U.S. oil growth will be considerably less than the 1.2 million to 1.4 million barrels per day that many people are predicting.

Centennial’s strategic response to this tightening global oil supply demand picture is as follows: first, we are remaining unhedged regarding oil, we may hedge some gas and may add to our gas FT commitments to ensure that our products move out of the Permian Basin, but we like the supply and demand picture on oil and with our low debt see no reason to hedge oil.

Second, we will continue on a path towards 60,000 barrels of oil a day in 2020, which is a highest four year oil growth CAGR of any E&P. And third, we will look for tactical means to cautiously term up service company agreements.

In closing, there are four things we like you take away from this call. First, we began to increase our 2017 production target, albeit slightly this time without increasing CapEx.

Second, we began to reduce our full year 2017 DD&A estimate. This represents the financial effect of the top quality technical team we now have in place as exhibited by the good wells we noted in our press release and on this call.

Third, we are exhibiting a very high multi-year oil growth rate, while maintaining negligible debt with an expected year-end debt to cap below 10%.

And fourth, we expect to begin to generate reasonable GAAP ROEs and ROCEs beginning at oil prices just about where WTI is today.

Posted by Bruce Oksol at 9:56 PM No comments:

Link here. Data points:
But look at this: according to the linked KFYR article, after one quarter, (there are eight quarters in a biennium, I would suppose), the Legacy Fund has reached about one-quarter of its goal for the current biennium.

Maybe its my inappropriate exuberance about the Bakken, but it seems that should have been the lede.


"The snapshot at this point in time, we've generated about $52 million, over three months. We've got 24 months to earn $200 million," said Dave Hunter, executive director of the Retirement and Investment Office.

Since deposits average about $35 million/month, that $52 million figure has to be fund growth not including deposits. Now one can do the math again. The number looks a lot more reasonable.

Not great, but a lot more reasonable.

The reason for the growth according to the executive director:


"The snapshot at this point in time, we've generated about $52 million, over three months. We've got 24 months to earn $200 million," said Dave Hunter, executive director of the Retirement and Investment Office.

In all these years of following this story, I've never see the state provide the annual rate of return on the earnings. I suppose the state has posted those numbers; if so, I simply missed the stories.

Note: the most recent deposit exceeds the average deposit in each of the last two years (2016 and 2017). The Saudi Surge was from November, 2014 (announced) through November, 2016 (announced). 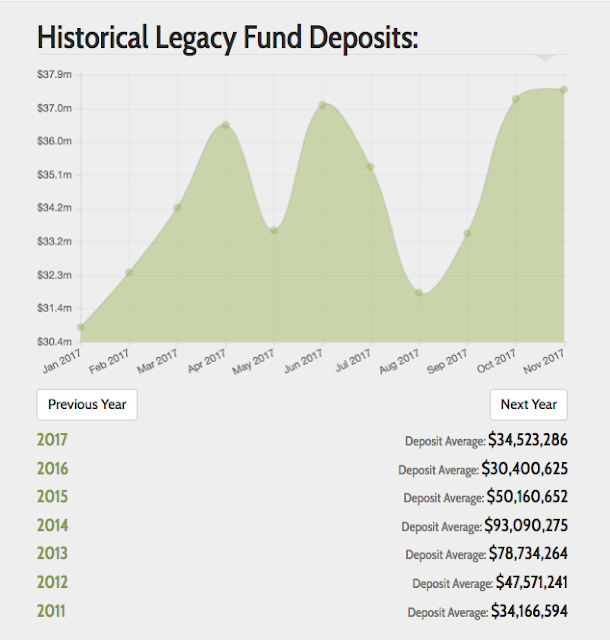 A data point I'm most interested in is how well the manager of the Legacy Fund invests the deposits. According to The Dickinson Press, in September, 2016, the state anticipated a rate of return of about 1.5% for each of the two years in the 2017-2019 biennium. Considering how "hot" the equity market has been since November, 2016, if that's the return North Dakota citizens are getting on the Legacy Fund, someone should be asking some tough questions. The Dickinson Press said that for the 2017 - 2019 biennium the state expected the Legacy Fund would generate $120 million on more than $4 billion in deposits.
Posted by Bruce Oksol at 6:26 PM No comments:

At the half:
Final:

On December 2, 2017, I posted this "headline": "Our Government Has Not Agreed To Crude Oil Production Cuts" which was made by a contributor to Investopedia. I then made this comment:


What the heck? "Our government has not agreed to similar cuts." What? What does "our government" have to do with setting quotas or mandates for crude oil production.

Now, I see that same thinking again, via Twitter:

Am I missing something here? US shale industry leaders will do what is best for their company and their shareholders. That's not cheating. There is no "US-OPEC" mandating industry quotas.

Dr. Alhajji was educated in Syria, Saudi Arabia, and the United States. He holds M.A. in Economics, and a Ph.D. in Economics from the University of Oklahoma, with a specialization in energy economics and policy. He received many awards including the Teaching Excellence Award and the Outstanding Mentor Award in addition to many prizes in woodworking.

What's most scary about Dr Alhajji's tweet is that the London-based Reuters oil analyst re-tweeted it and "liked" it.
Posted by Bruce Oksol at 3:22 AM No comments:

Two days ago we posted this screenshot with regard to a pre-alert in Italy: Cold in Europe? Italy at pre-alert level for natural gas withdrawals, from Twitter: 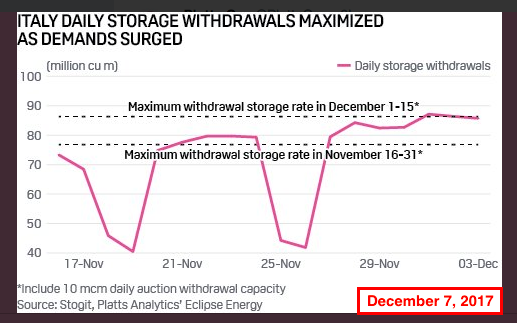 Now this: yesterday, this story appeared in Argus Media: Italy "will struggle" to meet the country's national energy strategy to phase out coal.
Bottom line: what a mess. No wonder Great Britain wants to exit the EU.
Posted by Bruce Oksol at 2:52 AM No comments: