The well:
Graphic and production profile at this link.
Posted by Bruce Oksol at 8:53 PM No comments:

EV sales results for July, 2017, are just coming in. Highlights:
But look at this: there were more EVs sold in every month in 2017 compared to the same month in 2016 -- from January to June. But then in July, a decline in sales year-over-year -- granted not all the sales numbers are in yet so it's likely July, 2017, will beat July, 2016, but it's going to be close.We'll check back in a few day when all the numbers are in.

Futures mean squat, but it is interesting after two days of the Dow 30 hitting new records, Dow 30 futures tonight are well into the green again. My hunch is that Apple earnings will have a huge effect on the market.

WTI: with Venezuela imploding, the talk on the street was that WTI would spike, due to an impending loss of heavy oil. After extending its gains to slightly over $50, WTI is currently at $48.87. Oh, well. So much for the "Venezuela theory."

Algore warned us back in 1994 it was going to get really, really hot by now. It then begs the question why Seattle residents did not prepare for the inevitable by simply buying an air conditioner, something that most Americans, even the "poor" in the Deep South, have.

According to The New York Times, Seattle is going through a severe heat wave, and OMG, only a third have air conditioning. And if truth be known, probably only those with "white privilege." The Times says the heat is "blistering" (really) and that "this week will be really dangerous."

I wonder what words The Times would use if one of those North Korean ICBM's hit Seattle? Blistering? Really dangerous?

What bugs me is that we've had more than 20 years of warning and all we've done is send money to a committee in South Korea to dole out to island nations in the South Pacific to shore up against a rising ocean. The tragedy of it all. The senselessness. The tragedy.
Posted by Bruce Oksol at 7:26 PM No comments:

Posted by Bruce Oksol at 5:30 PM No comments:

After Hours Volume, 17:19:40 p.m. Eastern Time: 10,899,602 shares
AAPL surges. WSJ. Surges 12% on revived iPad, Mac sales. Reuters story here. Bloomberg's Shira Ovide apparently wrote the story before results were announced. What a doofus .. a "relatively pedestrian 7.2%" jump in Apple's revenue..." LOL. The story was posted at 5:09 p.m. Earnings were released about 4:45 p.m. She couldn't have written this article and gotten it on the Bloomberg site that quickly. Her report is completely wrong. Compare with Reuters story.

Highlights from the second quarter include:

August 23, 2017: one thing native Americans are good at -- refusing to participate in planning meetings ,and then suing -- arguing they were not consulted. See Williston Herald. It gets a bit tedious.

This is an interesting story on many levels. For me it was a reminder of Slawson's Torpedo pad near New Town, where it will drill ten wells under Lake Sakakawea. From The Bismarck Tribune:

This summer, Slawson is drilling two oil wells to the east of the recreation area, which visitors drive by as they enter the park.

After the company is finished drilling there, anticipated in the coming weeks, the rig will move to the opposite end of the park and remain for about a year as crews drill an additional 10 wells to access oil under Lake Sakakawea, said Eric Sundberg, environmental and regulatory manager.

The larger well site, known as the Torpedo pad, is about 800 feet from Lake Sakakawea and adjacent to a boat launch area, which Ritts said attracts as many as 150 to 200 boats on a busy weekend.

Slawson recently installed a 32-foot sound barrier wall around this site, the first time such a wall has been used in North Dakota, to muffle the noise from drilling and completion work, Sundberg said. The wall will be removed after the wells are completed.

I assume the current well under discussion being drilled is:
From the NDIC map: 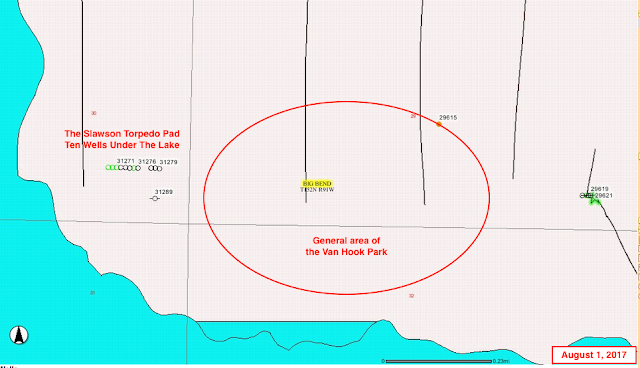 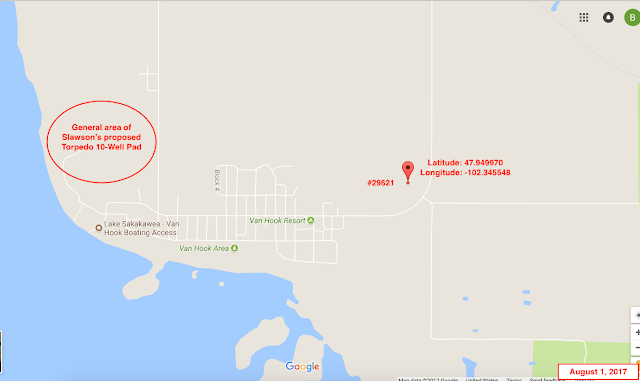 One can go to  Google maps, plug in latitude/longitude and track progress (though Google satellite views will be greatly delayed. When using Google maps, this is how you put lat/long into Google search: 47.949970,  -102.345548.
Posted by Bruce Oksol at 8:32 AM No comments:

This is the real reason why the market is hitting all-time highs. Wall Street finally realizes that "we" are still all here -- not wiped out or under water due to global warming, or freezing due to the new Ice Age.

From investorvillage, five global warming prognostications that were somewhat off the mark:
And the list is hardly getting started.

Did you all see the problem (posted last night)? Link here. If you missed it, here is is again:

Now we get this headline from Reuters via Rigzone: OPEC oil output jumps to 2017 high on further Libya recovery. Data points:


Car sales weak. Details to follow. This was predicted some months ago, that auto manufacturers relied too much on fleet sales. Those fleet sales are now coming back to bite us. In early reporting, General Motors, Ford and Fiat Chrysler sales were down 15.4%, 7.5% and 10.5%, respectively.

Dow 30 futures: market could open above 22,000 -- completely uncharted territory. No analysis why the surge -- right now, after a triple-digit jump yesterday in the Dow 30 -- futures now show another triple-digit jump on opening.

What happened? So what happened in the past 12 hours that would lead to this surge?
Let's stop there and add two links:
Now that we know more about the DXY, let's post the graphic:

Okay, so where were we? what happened in the past 12 hours that would lead to this surge?

Posted by Bruce Oksol at 5:57 AM No comments:

First day under new WH Chief of Staff -- no presidential tweets as of 6:36 a.m.

Musk Melon says the Model 3 is for the poor people. Actually, he didn't say that. He said something to the effect that the Model 3 is "mainstream."  For me, "mainstream" is the Chevrolet Bolt, and at $34,000, just barely.

But the guy that knows best, Phil LeBeau, says the Model 3 will compete with the BMW 3 series and the Mercedes C-class sedans. A little secret: neither the BMW (any series) or the Mercedes (any class) is considered "mainstream" in the US. On the way to work today, count the number of BMWs and Mercedes you see on the highway. Then count the number of Honda, Kia, and Toyota sedans. Those are mainstream.

Now we have a "green site" that says the same thing:


A decade ago, Tesla CEO Elon Musk envisioned building an electric car that would be both thrilling to drive and affordable.

Does the Model 3 car that Musk handed off to Tesla’s first 30 customers last Friday meet that description? Almost. But Tesla still has more work to improve affordability.

The basic version of Tesla’s Model 3 car starts off at $35,000 (before incentives), which is the average transaction price of a car in the U.S. today. But the Model 3 can quickly run up into the $50,000 range if a customer adds on a few of the extra features. The fully loaded version will cost $57,000.

If a customer wants a paint color for the Model 3 that isn’t black, that’s an extra $1,000. A version with a longer battery range adds on an extra $9,000. Autopilot technology (Tesla’s self-driving car tech) will cost an extra $5,000 to $8,000, depending the level of sophistication.

The other news that the "green site" failed to mention: Teslas around the world, and certainly in the US, run on coal.

A contributor over at SeekingAlpha says the same thing: the Tesla Model 3 is not a mass market car.


The Tesla (TSLA) Model 3 launch on Friday was a big disappointment in Tesla fan circles as can be seen from fan sites such as Elekrek, TMC, and Inside EVs.

Much of the disappointment has to do with Tesla delivering a $50K car and not the $35K as it has been promising for years.

The production ramp and the delivery dates that are now being suggested by Tesla also are also causing considerable heartburn among reservation holders.

None of these and other Model 3 shortcomings should be news to our readers. We have consistently found CEO Elon Musk’s promises on Model 3 pricing and ramp to be not credible. Therefore, it should not be surprising to readers that the Model 3 launch landed with a thud.

On another note, the earnings, revenues, "surprise" history for Tesla over at Market Watch.

On another note, Bloomberg quotes a hedge fund billionaire who suggests Tesla could run out of cash making the Model 3.


“The company is expected to burn over $2 billion this year as it begins production of its Model 3,” Einhorn said Tuesday on a conference call discussing results at Greenlight Capital Re Ltd., the Cayman Islands-based insurer where he oversees investments.

“It’s currently only capitalized for the next three quarters. As Tesla attempts to achieve scale for the Model 3, it will depend on the capital markets’ willingness to fund it.” Tesla, which began production of its more affordable Model 3 in July and handed over the first 30 cars at an event Friday, expanded credit agreements and raised capital through equity and debt offerings ahead of the launch.

With equities trading at record levels, Einhorn has endured losses on bets against stocks such as Amazon.com Inc., Athenahealth Inc. and Elon Musk’s Tesla. All have gained at least 30 percent this year.Einhorn did benefit from a bet on the decline of oil exploration company Continental Resources Inc., and his holding of pharmaceutical company Bayer AG. The hedge fund manager lamented that his strategy of favoring value over growth -- while historically a winning formula -- hasn’t worked as well in the recent rally.

The 2028 Summer Olympics has (have) been awarded to Los Angeles.

Our oldest granddaughter, age 14, played for the Texas Thunder water polo team in the National Junior Olympics held in Huntington Beach, CA, last week. In 2028, she will be 25 years old.

Our middle-aged granddaughter, age 11, plays soccer for FC Dallas. She plays with the twelve-year-olds. In 2028, she will be 22 years old.

Assuming I have their correct ages and did the math correctly.
Posted by Bruce Oksol at 5:37 AM No comments:

The capacity of the pipeline network within Mexico has been tripled with the addition of 18 new pipelines, while four new pipelines on the U.S. side of the border will add almost 6 Bcf/d of export capacity by late 2018.

As part of the building spree, CFE also initiated development of two new gas headers to be built in Texas: a 6-Bcf/d header at Waha in West Texas that was recently completed by a consortium of Carso Energy, MasTec, and Energy Transfer and the 5-Bcf/d Nueces Header, now under construction by Enbridge at Agua Dulce in South Texas. Today, we discuss CFE’s Nueces Header and its role in moving more gas south.

Wow.
Posted by Bruce Oksol at 5:34 AM No comments: