Ah, yes, all that Arctic methane and global warming: 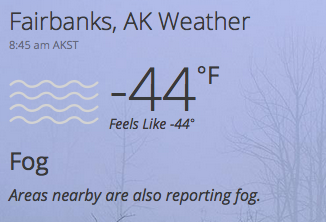 Areas nearby are also reporting a lot of freezing polar bears. But at least it's a dry cold.

Video at this link.  Most intriguing: turning the steak over every 30 seconds. I do that when cooking on the stove indoors; I don't do that on the grill outside.
Posted by Bruce Oksol at 12:11 PM No comments:

Those Earthquakes In Irving, Texas? "We're Aware Of the 'Ouch' -- Everyone In The Business Is" -- Oil Company CEO; The George W. Bush Fault?

I'm agnostic on the issue of exporting US crude oil. But there was some nice writing in this article from Say Anything Blog:


Today, U.S. oil production is higher than any other country’s in the world, the trade deficit trend is turning around, technology has reinvented the oil and gas industry and we’re less dependent on OPEC nations. We should finish what Reagan started 34 years ago and repeal the ban on exporting crude oil.

Technological breakthroughs, such as hydraulic fracturing and horizontal drilling, have transformed the industry just as Reagan imagined, and vast reserves of oil and gas have been unlocked right here at home. Yet our energy policies are still based on a scarcity of resources at a time of abundance, and environmental policies are based on old techniques and tools while ignoring modern technologies that produce oil and gas safer and cleaner.

Exceptions to the oil ban exist, such as exports to Canada and exports of heavy California oil up to 25,000 barrels per day (bpd), but as new domestic light sweet crude oil has already displaced the imported variety, there’s little place for it to go with the U.S. refining system configured for lower-quality crude oil.

Investments can be and have been made to handle more of this crude, but demand a discounted price for our domestic producers and supply chain to be economic. In addition, while North America’s supply is on the rise, domestic demand is actually shrinking. If nothing else, lifting the ban simplifies our energy policy and prevents artificial market distortion.

It's hard to believe: US oil production is higher than any other country on earth, and by extension, probably in the entire known universe. That's amazing. I bet if you asked a Jay Leno jaywalker, the answer would be Saudi Arabia.

I'm agnostic on the issue of oil exports because at the end of the day my thoughts on the subject have zero effect on what will happen. However, as an investor, one needs to be able to read the tea leaves; one can profit either way -- with or without crude oil exports. In the free market arena, I am in favor of unfettered exchange of commodities and goods. But I'm not always in the free market arena. Sometimes I find myself in the political arena.

See disclaimer. This is not an investment site. Do not make any investment, financial, or relationship decisions based on anything you read here or think you may have read here.

Is it just me or have there been a lot few articles on the issue of fracking? I suppose that rigs are now being stacked; gasoline is really, really cheap; and, the end of the California oil and gas industry as we once knew it is coming to an end, fracking is less of a hot button issue for the mainstream media. [Oh, that's right -- now it's all about lyin' Brian.]

Speaking of fracking, I don't know if you heard, but the good folks in Texas have found the source of the swarm of small earthquakes under Jerry Jones' old football arena: geologists have discovered a small fault -- it will probably be re-named the George W. Bush fault -- running under Irving, just south of the George (H. W.) Bush Turnpike. The swarm of 2.9 to 3.7-magnitude earthquakes had nothing to do with fracking (it was also worth nothing that there is no fracking in Irving.

By the way, our 8-year-old granddaughter heard this story at the very same time I heard this story on the radio while driving to soccer. She actually asked me if that's what seismologists do -- study earthquakes and "things" that make the earth move. I was quite impressed. I think she had trouble pronouncing seismologists but she had the concept.

Speaking of that granddaughter, her class is now studying the human heart. One of her/their assignments was to color a diagram of the heart with "red" and "blue" for the color of the blood in the various chambers and blood vessels. I'm almost afraid to write that: Don will send me a map of the 57 states of the United States and suggest she color in the "red" and "blue" states. LOL.

The Scoop Blog is reporting:


At an afternoon press conference, SMU researcher Heather DeShon said the two-mile fault line near the Trinity River identified in this morning’s preliminary study will very likely remain the center of seismologists’ investigation.


The SMU team noted that most of the quakes are centered less than mile from the site of two defunct gas wells, drilled in the late 2000s by Trinity East Energy.

But Trinity East President Stephen Fort said his company made sure to avoid any faults when it drilled the wells.

“We’re aware of the Ouachita [fault system],” Fort said. “Everyone in the business is.”

Fort would not comment on a mechanical failure in one of the wells that forced the company to shut it down and seal it. Nor would he say whether that well was sealed with fracking fluid inside, which might put pressure on underground rocks.

But Fort dismissed any notion that his wells could cause quakes. He said the shafts went only a mile and a half deep, while scientists have placed the quakes nearly 3 miles underground, or deeper.

“There’s faulting everywhere,” Fort said. “If wells caused earthquakes, when they drill 2,000 wells in Fort Worth, where are the earthquakes?”

Now that's a question an oilman probably should not have asked. LOL. Zeus is probably already in contact with his brother Hades as we speak.  And yes, for those who have read this far, Hermes is the messenger. Zeus has his thunderbolts but no internet.

[George W. Bush is a lot easier to pronounce -- and spell -- than "Ouachita." Everyone in favor of renaming the fault, raise your hand.]
Posted by Bruce Oksol at 12:02 PM No comments:

Halcon will have twice as many rigs in the North Dakota Bakken as they will have in Texas Eagle Ford. Just saying.

I don't know if folks have noticed, but there are so many snow storms hitting Boston this year it appears the Weather Channel has quit naming them. Of maybe they have run out of letters. Whatever.

Regular readers know the fun I've had with Patrick Kennedy (and others) lamenting, many years ago, that his children would grow up never getting the chance to see snow. Unless they've all moved to the Fiji Islands I assume the Kennedy children, grandchildren, and great-grandchildren are seeing plenty of snow this year.

Don has a suggestion: when there are more snowstorms than there are Weather Channel names, we simply call the New England snowstorms "Kennedy Cold Fronts."

Let's see if it works:

I guess the worst of the recent series of Kennedy cold fronts will be the storm that hits Boston this Monday. AccuWeather is reporting:


The last in a series of [Kennedy cold fronts] bringing snow to part of the Northeast this weekend will bring the heaviest snow and greatest disruptions to travel and daily activities during Monday.

The swath from Boston, northward to Portland, Maine, westward to Concord, New Hampshire; Worcester, Massachusetts; Rutland, Vermont, and Albany, New York, will likely be within the zone that receives the greatest amount of snow from the early week storm and cumulative amount of snow forward from Saturday.

I don't know if folks recall the seven words that George Carlin said could never be said on TV. This was back in 1972.

Similarly there are now seven words that cannot be used in the Obama White House:
For a French ultra-liberal, it is surprising French President Francois Hollande was able to use one the seven words not allowed in the White House:


"If we don't find not just a compromise but a lasting peace agreement, we know perfectly well what the scenario will be. It has a name, it's called war," Hollande told journalists in the city of Tulle in central France, according to Reuters.

The above list has the words, if used in the White House, that will get you fired.

There is a second list, too long to post, that if used, will result in Michelle meals in lieu of three-martini lunches. Or a round of golf with the president.

Okay, okay, one word from the second list: Hillary.

While watching our middle granddaughter play soccer the other day,  I asked our older granddaughter if she had heard of "Presidents' Day."

Of course she had. I asked her what Presidents' Day meant, expecting in reply something about Obama, Bush, Washington, Lincoln...

Her reply: "Presidents' Day is when the president steps out of the White House, and if he sees his shadow, we have another year of bullshit."

Is anything more painful than when your soft drink comes spurting out your nose?

In all the excitement leading up to the Super Bowl, I forgot to post this story (if I did, I forgot). Platts is reporting:


[North Dakota's] three-person Industrial Commission approved an order requiring Bakken crude to be conditioned before it is transported.

The order, to go into effect April 1, will limit Bakken to a vapor pressure of no more than 13.7 per square inch, 1 psi below the national standard of 14.7. It also requires that operators separate light hydrocarbons from the crude and prohibits blending light hydrocarbons back into the oil.

This is about the same amount of pressure required in NFL footballs.

I assume Bill and Tom already know that most Bakken crude oil already has a vapor pressure less than 13.7 psi.

But, like Bill Clinton used to say, it's only illegal if you get caught.

What does it matter?

Our older daughter mentioned to the baker that she had never tasted King Cake before. The baker graciously gave each of us a sample. Delicious. Our 7-month-old granddaughter practically pulled my hand into her little mouth to get the entire sample in one bite.

It goes without saying that the 7-month-old knew what this was all about and was not going to settle for a sample this time. 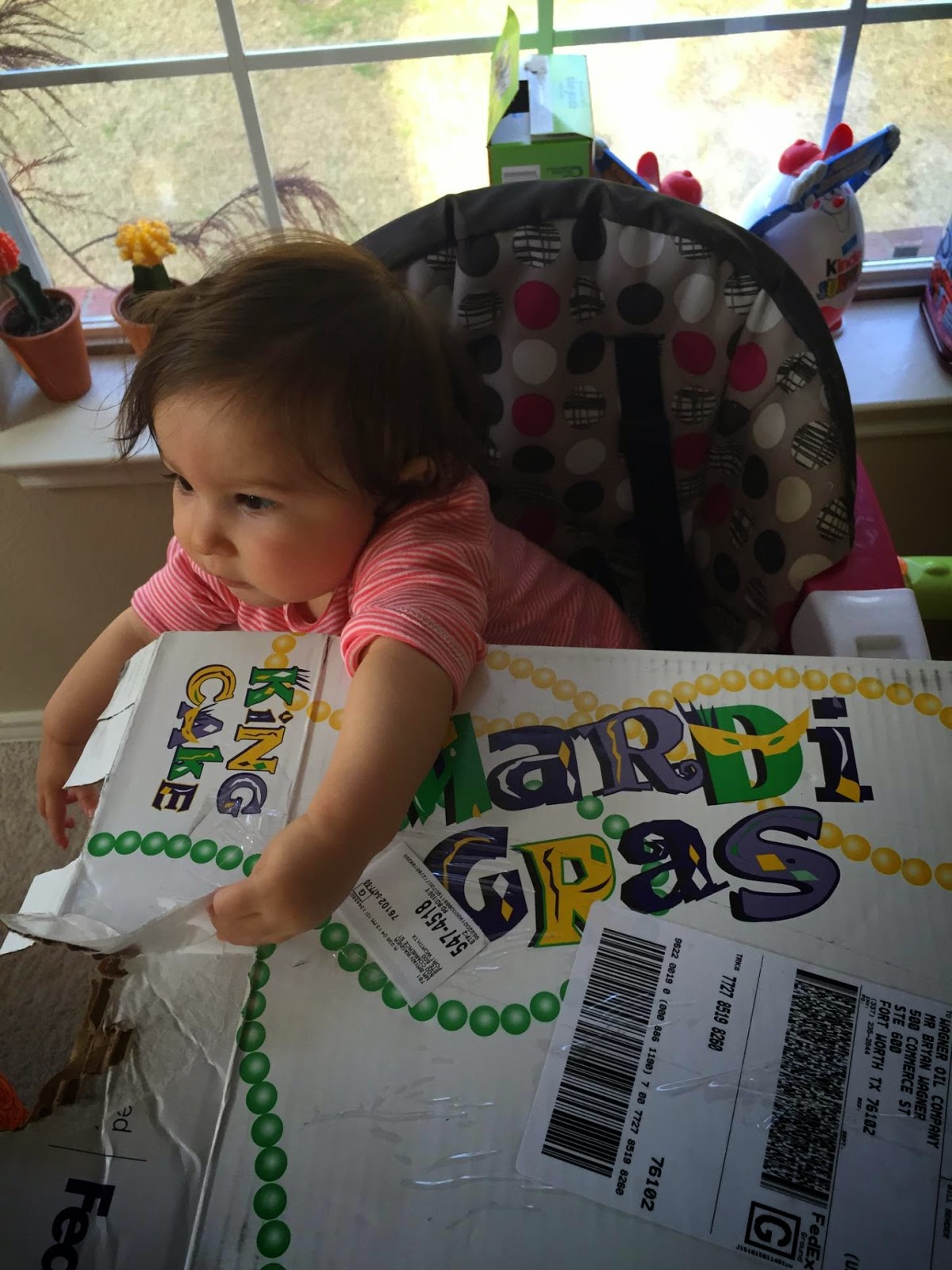