I know he/she will need to visit a North Dakota DMV office for vision test, etc, but will he/she require to take the North Dakota written exam and/or take the driving test?


The sight is so surprising that Americans are sharing photos of it, along with all those cute Halloween costumes, sweeping vistas and special meals: The gas station sign, with a price of $2-something a gallon.

The article does not mention the word "fracking." Or any reason "why."

The article does note:

Posted by Bruce Oksol at 8:03 PM No comments:


A 2013 INGAA Foundation study found that the number of interstate natural gas pipeline authorizations issued more than 90 days after federal environmental assessments were completed climbed from 8% to 28% since Congress passed the 2005 Energy Policy Act. Rather than streamlining permits, as Congress had intended, the law had the opposite effect. It removed the Federal Energy Regulatory Commission’s ability to keep project reviews on a strict schedule, allowed both state and federal agencies to drag their heels on pipeline permitting, and opened the door to more objections by environmental pressure groups.

Authorization delays were caused by conflicts among federal agencies, as well as inadequate or under-trained agency staff, applicant changes to projects requiring additional or revised environmental review (often in response to environmentalist or other third-party protests and demands), site-access problems, and FERC and other agency reviews of requirements for mitigating asserted environmental impacts, INGAA concluded. Increased partisanship at FERC has also increased delays.

The Obama Army Corps of Engineers slowed pipeline permits by citing the Clean Water Act. Its Fish and Wildlife Service (USFWS) cited the Migratory Bird Treaty Act to justify slow-walking permits. Its Environmental Protection Agency wants to control all “waters of the United States," so as to exert regulatory authority over activities on federal, state and private lands – including drilling, fracking and pipelines – in the name of sustainability, climate change prevention and other eco-mantras.

The MBTA bans the “taking” (harassing, harming, killing, capturing or wounding) of migratory birds, their nests and eggs related to natural gas pipelines and other projects. Because building a pipeline requires clearing a right-of-way, excavating and other activities that could affect wildlife for a short time, a permit is required. But native grasses soon cover the route, and state-of-the-art steel, valves and safety features greatly reduce the likelihood of ruptures and spills, compared to earlier generation pipelines.

And yet the Obama FWS drags its feet on pipeline permits – while approving numerous renewable energy projects beloved by the President and his “green” base, including massive wind turbines that slaughter millions of eagles, hawks, bats and other threatened, endangered and migratory species every year.

Much more at the link. Can't wait until we get adult leadership back in the White House. Another lost decade.

For me personally, I just keep sending letters of "thank you" to the great folks of Minnesota and Nebraska.  Posted earlier:


On another note, it's a shame Warren Buffett bought Burlington Northern Santa Fe some years ago. The closest I can find to compare BNSF is the Union Pacific.

BNSF, BRK, and UNP investors need to thank Nebraska and Minnesota for the windfall.

By the way, when you get to the 10-year graph on UNP, be sure to look at the bottom of the graph and note the increase in dividends: from 13.5 cents/share in 2009, to 50 cents currently.

One of the things about investing, don't fight reality. Watch what's coming out of Washington, DC; it's an open-book test.

At lap 287, of a 334-lap race, of the NASCAR race I raced down to the neighborhood sports restaurant to see the finish. Wow, not one television set tuned to the race. The Cowboys game was over, so they must have been watching the New England Patriots blow out the Denver Broncos. I raced home on my bike to catch the end of the race on the internet (we don't get ESPN on our basic cable).

What an incredible race to have watched. Last lap -- 334 -- following a caution -- Jimmy Johnson / Jeff Gordon -- 1-- 2. Another caution. Keselowksi fights for 1st. Gordon spins. The caution.

For all I know the race is over; internet delayed.

I see Gordon did not finish in the top 5. Spun out. It will be interesting to read the sports story.

Having said that, I'm a bit disgusted with the local sports restaurant. The owner has two sports restaurants on the same frontage road about a quarter-mile apart. He must have been struggling because he shut one down this past year and is selling it. In my mind, he shut down the better of the two. Be that as it may, it seems to be me poor management when all television sets are tuned to one football game that does not even involve the local team. If the football game were important, or even close (in score), maybe. But this was a Broncos-Patriot game (the restaurant is in Texas) and the Patriots were blowing out the Broncos. There were probably other football games -- I didn't stick around long enough to look -- but no NASCAR -- third to last race this season -- everything on the line -- and at the Texas Motor Speedway about 20 miles to the west, no less. I am truly amazed. And disappointed.

[Later: saw the comments about Keselowski/Gordon in the green-white-checker. I'm a huge fan of Jeff Gordon's but I think he may have blown it. Keselowski was his usual aggressive self; Gordon failed.]

Posted by Bruce Oksol at 5:55 PM No comments:

For The Archives -- The 2014 Crude Oil Price Slump 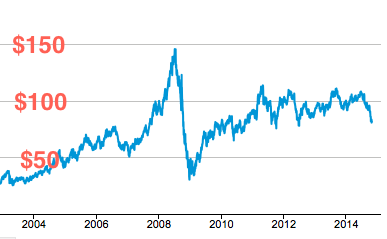 I dropped the ball.

Some time ago "anon 1" sent me a link for tracking permits and wells in Canada; I mentioned that I would post the link at my "Data Links" page. I must have forgotten; if it's there, I didn't see it.

The link is now there. A link to a website that tracks permits and wells north of the border. It's called GeoActivity Maps and is now linked in various locations on my "Data Links" page.

In addition, the reader provided me with a link that shows rig locations in western Canada.

A big apology to all involved, saying that I would post the links and then forgot.  A huge "thank you" to a reader for catching this. The reader was using Google analytics when he noticed a spike in visits to the MillionDollarWay when "anon 1" posted the Canadian link.

The stories on this page are unrelated.

The same source, Market Realist, also has a long multi-part series on Targa Resources and the Atlas Pipeline deal.