The April, 2021, EIA dashboards have been posted: 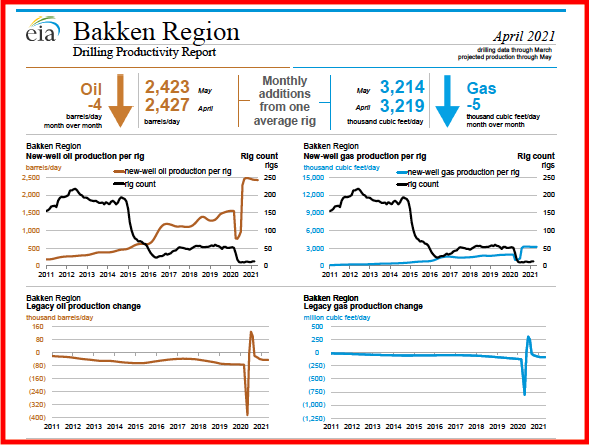 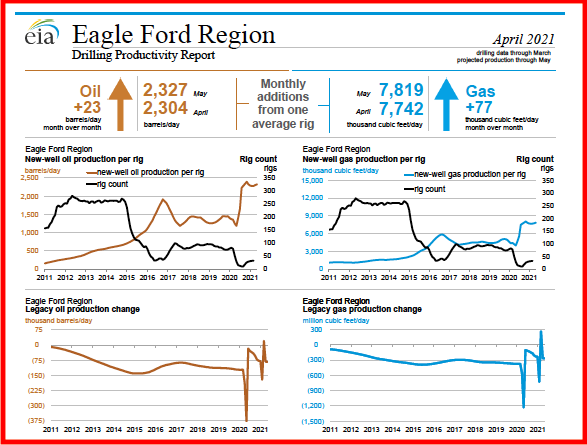 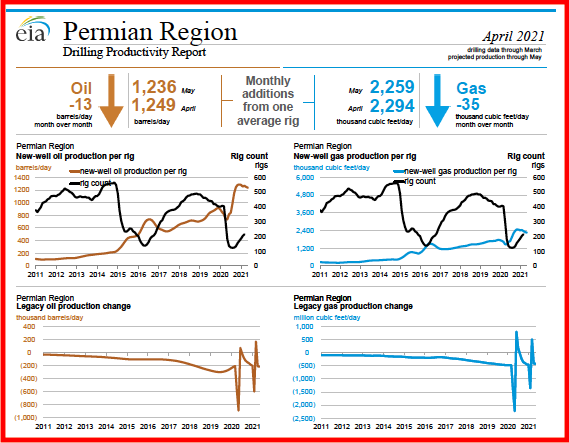 The Bakken and the Permian show almost no change month-over-month. Interestingly enough, the Eagle Ford showed the "biggest" change, albeit trivial in the big scheme of things. It surprised me because so many writers / analysts have suggested the Eagle Ford is the fastest declining oil field in the country.

The EIA’s Monthly Drilling Productivity Report is forecasting that for the nation’s most prolific basin, the Permian, production will return to 4.466 million barrels per day in May.

Coincidentally, moments after I posted this link/story, it was noted that the EIA had posted the April, 2021, "dashboards."

Big Oil's dwindling reserves are a major problem. Link here to Cyril Widdershoven over at oilprice. I think I've been reading "these stories" or variations thereof over the past several decades. During the Jimmy Carter administration it was downright dire.

Even before reading the article, I was thinking -- this is going to be a "money" story -- financial, economic, business -- and not a scientific, geologic story. And it was. This is the nub:

As demand recovers and oil prices climb, there are plenty of potential financial windfalls in 2021 for these companies to take advantage of.

The question remains, however, over whether or not the companies will invest in new production and reserves or will they use it to pay dividends.

Some analysts have already claimed that the current reserve crisis is no real issue, as most IOCs are going through an energy-transition phase.

However, to invest in the energy transition these companies need plenty of cash to cope with the planned multi-billion-dollar wind, solar, and hydrogen projects, while also keeping investors and shareholders happy.

As stated by Citibank, “the latest words from an IOC board chairman, ‘Black pays for green’, refer to the 80% of the CFFO (cash flow from operations) generated from oil and gas activities, which is expected to be above 70% by 2030.”

If reserves are not high enough to sustain “normal” oil and gas operations, the time frame for energy transition success then becomes a major issue too.

Again, this seems to be a typical "business" dilemma. Warren Buffett addressed it by simply not paying dividends. Much more to the story, of course. But, wow, how things have changed, comparing the current energy situation with that during the Carter administration, and even the Barack "we can't drill our way to cheaper oil" Obama administration. We're so over-supplied with fossil fuel the US has the luxury of shutting down pipelines even after they’ve been built and are safely transporting oil.

Where we stand on the DAPL and projections:

South Dakota's attorney general has been selected for promotion to colonel in the US Army reserves. Link here.

From a reader, highly edited to maintain anonymity. If the reader does not want this posted, let me know and I will remove:

The tea leaves suggest President Biden won’t step on ND DAPL after dealings with MHA Nation chief Mark Fox who went from 2016 NODAPL to current PRODAPL since 50% of MHA production rides DAPL.
Mark wrote letter for Biden administration, gave to Ness in ND & legislators but not sure it went to DC.
My gut says since MHA got Federal lease exception for 7 ND counties he may have stirred up Biden-American-Indian-appointed staff to push for keeping DAPL OPEN.
Fox has been in Bismarck making his case for new taxes on MHA reservation oil, federal lease exemptions he secured, and keeping DAPL OPEN. Ron Ness wanted his DAPL letter sent to Biden, I read recently.
Who knows but sounds more positive imho.
More than a dozen of our ND operators use DAPL so I’m hopeful.
The MAG 1 well & some other (JROC1) stratigraphic testing locations appear to be getting ready for EOR to come full circle. I hope to find out more on my upcoming trip to ND, soon. We have multiple tracts around MAG 1 within a stone's throw, as they say. Of course I’m highly exuberant about the Basin in ND.
NARO (National Association of Royalty Owners)

No in-person ND NARO meeting this June. NARO will be virtual per ND NARO president (e-mail). Virtual meeting to be announced. Oklahoma has October NARO in person.

Hopefully "the judge" is listening.

Some say it is the best dessert wine in the world.

I will let you know my thoughts later.

My wife said it was the best dessert wine she had ever tasted. It will now be here "go-to" dessert wine. LOL.

I would agree -- for a dessert wine, top shelf.

But for sipping while watching reruns of Columbo: Gater Bite is still my go-to ... 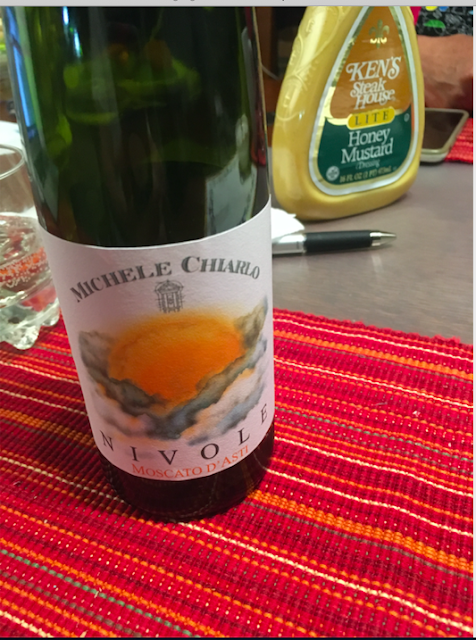 The Hess State B Wells In Alger Oil Field 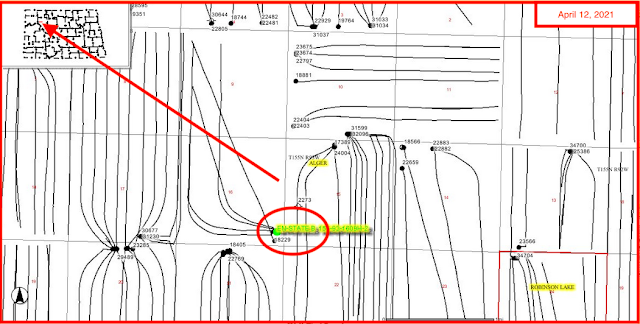 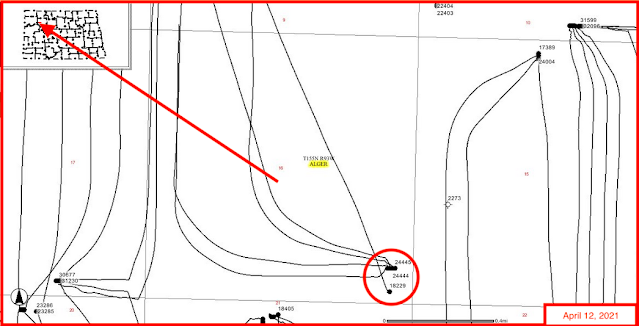 Reminder: "Focus on Fracking" -- this week's edition, posted last night. Link here. I check it every week but sometimes I forget to post the link. Sorry. But the link is up today.

Saudi: breakeven for Saudi next year -- $65. That would be Brent / OPEC basket, I assume.

Posted by Bruce Oksol at 4:13 PM No comments: 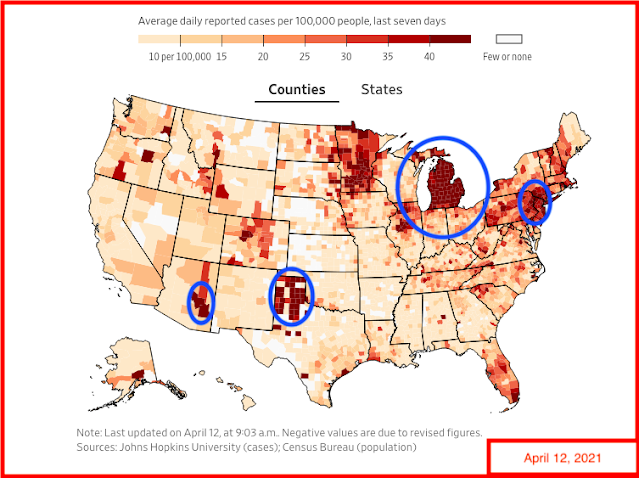 Michigan. Link here. The question: what the hell is going on in Michigan? Why isn't the president acting? First thing we do: divert vaccine going to states that "don't need it" to Michigan. The previous president would have tweeted and his minions would have figured out what was necessary. And then a CDC-eSWAT team -- epidemiology special weapons and tactics team -- needs to be deployed to Michigan immediately to help the state health department. If these things aren't being done, it tells me, things are not as bad as some folks are making them out to be. Let's look at the Johns Hopkins data: link here. Total cases per capita, Michigan ranks 41st, well below the US average which is between Louisiana (29) and Minnesota (30). Deaths per capita, Michigan ranks 20th. I would be curious what the story was regarding nursing homes. Some say the state's policy was like that of New York state. I don't know. But right now, in raw numbers, Michigan ranks #1 in new cases, which is truly amazing, considering its population compared to New York, California, Texas, and Flordia.