Random Video Of Highway Construction South Of Williston -- May 9, 2015; Hawkeye-Madison G-613 Getting Ready To Celebrate Its 56th Birthday


I can't remember if I posted the video earlier.

This weekend's edition of the Wall Street Journal, Review Section, had a book review on The Brontë Cabinet, by Deborah Lutz, c. 2015, 310 pages.


When Virginia Woolf visited the homes of Thomas Carlyle and John Keats in the 1930s, the writers had been dead many years, their houses preserved as historic sites. Even so, Woolf felt a kinship with the literary greats who had once dwelled in the rooms where she stood. “We know them from their houses—it would seem to be a fact that writers stamp themselves upon their possessions more indelibly than other people,” she wrote in a magazine essay titled “Great Men’s Houses.” “Of artistic taste they may have none; but they seem always to possess a much rarer and more interesting gift—a faculty for housing themselves appropriately, for making the table, the chair, the curtain, the carpet into their own image.”

Woolf probably would have liked “The Brontë Cabinet,” Deborah Lutz’s consideration of the Brontë sisters—Charlotte, Emily and Anne—through nine items connected with the family of novelists. The objects of Ms. Lutz’s fascination are the tiny books the Brontës made as children, the family’s needlework, a walking stick, a brass dog collar, family letters, a portable desk, a bracelet containing Anne and Emily’s hair, an album of pressed ferns and a fragment of jewelry.

I visited the Brontë Parsonage Museum in Haworth, England, some years ago. The parsonage was something to check off on my bucket list but not particularly exciting or memorable. However, the entire visit to Haworth was quite incredible, memorable, and something I could do again.
Posted by Bruce Oksol at 9:03 PM No comments:

A reader just sent me this update of a Sinclair pad just on the other side of the northwest corner of Dunn County:


I was at the Forrest USA/Yauch/Diamond/Horovitz pad yesterday.

The Forrest is an existing well Sinclair got from Marathon.

Yauch was fracked and has produced already.

They brought in frac tanks and there's currently a workover rig on location pulling tubing on the other 2 wells. There's a frack string on location so I'm assuming they're running it in after they pull the tubing. 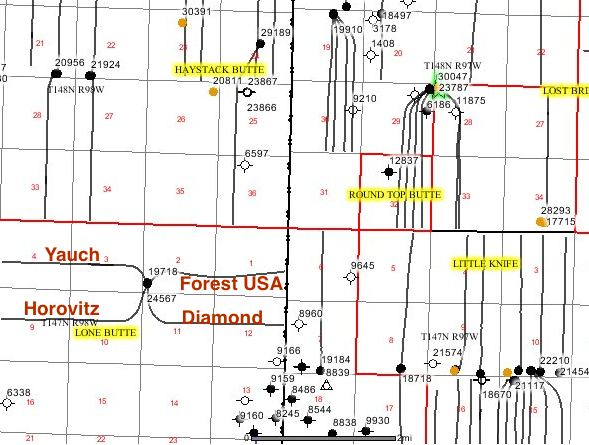 Note the great oil fields in the immediate area: Lost Bridge, Little Knife, Haystack Butte. One can tell this is a relatively quiet area at the moment; it is southeast of Watford City. I think the horizontals are correctly labeled but my usual disclaimer/warning pertains.

Fox News is reporiting: forty-two days since last confirmed Ebola case in Liberia. Incubation period is 21 day; two such periods constitutes the benchmark for declaring an Ebola epidemic over.


The World Health Organization on Saturday called the milestone a "monumental achievement for a country that reported the highest number of deaths in the largest, longest, and most complex outbreak since Ebola first emerged in 1976."


Development of the solar farm will be led by SunEdison -- whose parent company appears to be in deep doo-doo; filed just 18 hours ago, Zacks is reporting that SunEdison postpones 10-K filing again; YieldCo in trouble; this delay also put SunEdison’s yieldco TerraForm Power TERP in trouble. TerraForm Power is unable to file the 10-K as it has to rely on SunEdison systems and personnel to complete its financial reporting and control processes.

The high debt burden is mainly due to SunEdison’s aggressive acquisition policy which took a toll on the balance sheet with total outstanding debt nearly doubling to $11.7 billion at the end of third-quarter 2015 from $6.3 billion a year ago. On the news, SunEdison's shares fell again Tuesday (this week). Up to Tuesday's close, SunEdison's shares had fallen more than 90 percent in the past 12 months while TerraForm's had dropped about 70 percent.

Original Post
I have a page called the "next big thing."

I think this next subject could be placed on that page.  "Yield cos."

"Yield cos" have been around for awhile; I may have first noted them six months ago, but in the big scheme of things, these are quite new (if not new "new," at leas the "new" buzz). Let's see if wiki has a page on them yet. Google yieldco wiki. Yup, there it is: yield co.


Yield cos are commonly used in the energy industry, particularly in renewable energy to protect investors against regulatory changes. They serve the same purpose as master limited partnerships (MLPs) and real estate investment trusts (REITs), which most utilities can't form due to regulatory constraints. Yield cos give investors a chance to participate in renewable energy without many of the risks associated with it.

I find yieldcos or yield cos interesting for two reasons. First, I am fascinated by all the interest in solar energy, simply from an academic point of view; and, second, yield cos provide an interesting opportunity for investors.

Disclaimer: did I just mention "investors"? OMG. This is not an investment site. Do not make any investment or financial decisions based on anything you read (past, present, future tense) here or think you may have read here.

According to wiki, the number of yield cos grew rapidly in 2013 and 2014 through initial public offerings. They include:
I'm not going to say much more about it; just posting enough to help me understand the phenomenon.

From 24/7 Wall Street: Why First Solar YieldCo Will Dominate.


Both First Solar Inc. and SunPower Corp. recently reported first-quarter results that fell far short of estimates. Analysts may not have taken fully into account the amount of revenues that both companies have received in the past from sales of their completed projects.

This time was different. This time, both First Solar and SunPower held on to assets they might have sold before because those assets are destined for the two companies’ joint venture yieldco, 8point3 Energy Partners.

Analysts at Argus have now weighed in on First Solar following its first-quarter report and have also provided a look at the prospects for the yieldco. The short version is that Argus rates First Solar a Buy with a price target of $78 a share.

ccording to Argus, First Solar is the best positioned of all solar makers based on three factors. First, the company has managed to remain profitable while many of its competitors have not. Second, First Solar continues to invest in its technology; witness the recent acquisition of an intellectual property portfolio from General Electric. Third, the company has a solid balance sheet and is cash-flow positive. The yieldco offers “additional opportunities for the company to monetize projects.”

Solar companies are diversifying in other ways also. Forbes is reporting:


SunEdison is moving beyond solar. Beyond even the wind market that it just entered recently. It now plans to be a hydropower plant owner, too.

The Missouri company on Thursday said it’s agreed to buy 757 megawatts of renewable energy projects from seven companies that include hydropower plants in Brazil and Peru. SunEdison plans to pay $1.4 billion for five of the seven pending acquisitions, according to its filing with the U.S. Securities and Exchange Commission.

The types and locations of the projects reflect the company’s focus on gaining a foothold in emerging markets and owning a greater variety of renewable energy projects.

SunEdison is building a solar panel factory in India and recently hired Cathy Zoi, a former partner at private equity firm, Silver Lake Kratwerk, and assistant secretary at the U.S. Department of Energy, to head its rural electrification effort.

Of course, SunEdison isn’t the only solar project developer to have been a globetrotter. When growth in Europe seemed to slow down in 2011, First Solar started to talk more about efforts to move into emerging markets such as India and China. The same goes for SunPower which is bullish about the Middle East and recently teamed up with Apple to build solar power projects in China.


A much-hailed law that restricted the opening of new stand-alone fast-food restaurants in one of the poorest sections of Los Angeles did not curb obesity or improve diets, a new study found.

City lawmakers passed the zoning ordinance in 2008 that limited the opening or expansion of fast-food outlets in a 32-square-mile area south of Interstate 10 that struggles with high obesity rates and other health problems.

The law, believed to be the first effort of its kind by a major city to improve public health, did not ban new eateries in strip malls.

The research by the Rand Corp. think tank found that obesity rates in South Los Angeles continued to rise after passage of the law.

“It had no meaningful effect,” Rand senior economist Roland Sturm said. “There’s no evidence that diets have improved more in South LA. Obesity and overweight rates have not fallen.”

Health experts said a single intervention would not reverse the obesity problem. People also have to exercise and make lifestyle changes, they said.

I would assume that making folks walk farther to their favorite fast-food restaurant was the "exercise and lifestyle change" the city lawmakers were hoping would make a difference.

If this news report doesn't end up on the Rush Limbaugh radio show sometime next week, I would be terribly -- terribly -- surprised.