Tires. Apparently there is big business in burning waste tires in Japan for heating. Apparently ports in Oregon are  major export centers for shipping waste tires to Japan. I am unable to find a link to a current story regarding this. If any reader can find links to stories along this line, it would be very much appreciated.
Portland: the dream of the 90s died in Portland.

Theme for the past week:

Most under-reported story of the week:

April 24, 2021: Just when you thought you had forgotten about the honey bees --- not so fast!  This is another meme that will never go away. The question not being asked: why were honey bees affected by "man," whereas the wasps did just fine? 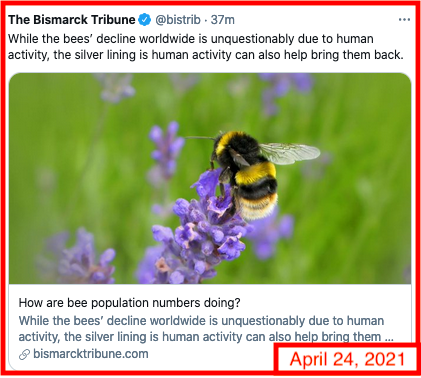 Wow, that was fast: taking a page out of the Obama playbook -- the Friday night news dump. US government says okay to put JNJ Covid-19 vaccine back on the market. "They" waited until late Friday to announce the decision.

Some folks have suggested the previous administration rushed the bureaucratic process in order to allow "emergency use" authorization of JNJ's Covid-19 vaccine. It took about a year, I suppose, to go from "zero" to "emergency authorization use" with a gazillion pages of scientific research and bureaucratic review prior to release.

So, on a Tuesday, April 13, 2021, nine business days ago, the "authorities" asked states to temporarily and voluntarily halt the administration of said vaccine.

Then, on Friday, April 17, 2021, less than four full business days later, the "authorities" were apparently ready to recommend states voluntarily resume administration of the JNJ vaccine.

Apparently "four days" looked a little fishy, so they waited a few more days, until today, April 23, 2021, to make the announcement. Less then ten business days to get through all that scientific research. Pretty fast for government work.

And it's so safe, the panel says it's okay for pregnant women and their babies. Link here. Yup, and there it is -- the time-stamp: 4:51 EDT. Can't cut it much more closely than that. The vaccine will be re-released with no restrictions. There will be a warming label for women under the age of 50.

What we knew all along: social distancing is worthless. MIT study.

The S&P 500 added more than 1% to reach a record intraday high, after the index dropped 0.9% during the regular trading day for its worst session in five weeks.

RELEASE THE KRAKEN: over at MarketWatch today: 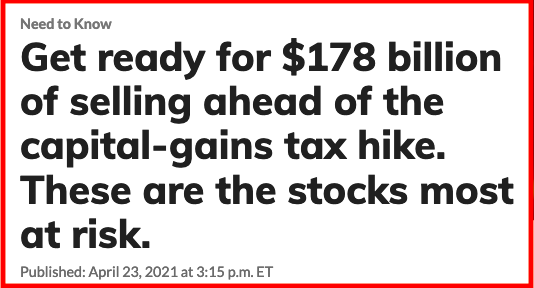 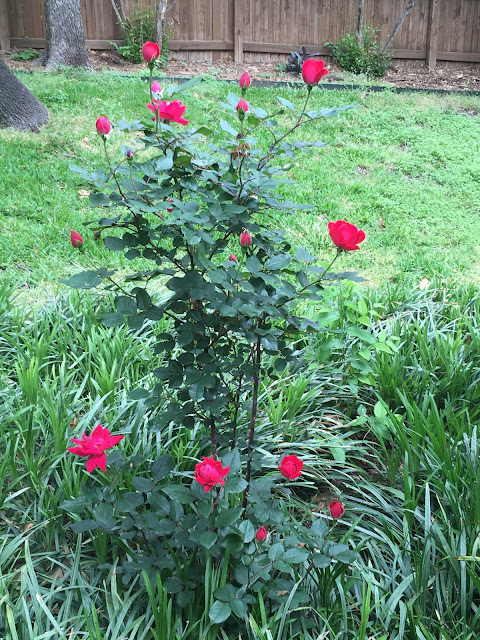 Posted by Bruce Oksol at 4:16 PM No comments:

California: the "unwelcome" mat is out. Link here.  Let's see who blinks first. Perhaps the refineries should be the first "to go." Just saying. If the refiners stay, all California is doing is displacing the production. Later, the state will do an investigation to try to find out why gasoline prices are rising. 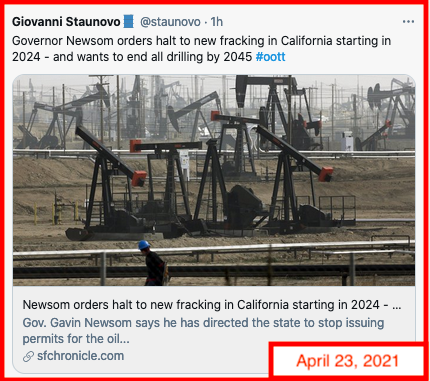 I doubt the US Supreme Court wants to wade into this mess.

If I understand this correctly, nothing has really changed. The court simply maintained the status quo: it is still up to "the judge" to determine whether the DAPL can remain open during the environmental review that will continue through 2022.

I could be wrong, but that's how I'm reading it. More to follow, I'm sure.

Immediately following the news, the face of the Bakken, CLR:

I don't think I've seen anything like in the recent past.

The stocks that shocked today:

Link to Rigzone (as usual, some numbers rounded):

See first comment. I wonder where he is now.

The Smithsonian provides its version of these prognostications.

A reader sent me a note regarding Paul Ehrlich.

Thinking back on the Y2K scare, it's amazing how many "chicken little" fears we've suffered through the years.
One wonders if "seasonal flu" will ever make a comeback or if Covid-19 killed that one off forever?
And, of course, there was always Zika.
I guess in the 1950's we had the "15-minutes-to-run-home to our bomb shelter in case of  a nuclear attack" scare. I actually remember my parents improvising such a bomb shelter in our basement, and me worrying endlessly about the windows at the top of the foundation/ground level -- wondering if they were adequately sealed.
And then, of course, if they were adequately sealed, the level of radon would only worsen, and I would die of lung cancer before the age of fourteen, perhaps dropping dead while running home for a nuclear-bomb drill. Those drills were held once-a-year to determine who could get home in 15 minutes to die with their family, or remain sheltered-in-place to die with their teacher. Hiding under our desk was all we had; the supply closet was too small to hold fifteen second-graders and a pregnant teacher.
And, most worrisome of all: fluoride in our water supply. That was a scare that lingered through my freshman year in college.
I'm not sure how I survived 60+ years of such fears.

The way Sophia, age six and her friends talk about Covid, it is obvious that this is the 2020 version of fluoride, radon, Zika, and CO2 all rolled into one.

By the way, this is quite hilarious. Almost every day Sophia has a banana smoothie. This new routine started about two weeks ago. We make them at home, and she pretty much makes them herself -- she loves turning on the blender.

And everyday we take a plastic straw out of the drawer. Lately, I've been washing and re-using the plastic straws for an extra day or two -- not that I'm worried about the Pacific Ocean living her in Texas -- I just hate spending a couple of bucks on 5-cents worth of plastic.

Yesterday, Sophia noted the straw I gave her was still wet from the previous day. The jig was up. She wasn't going to use a wet straw. So I opened the drawer to get her a new straw and, as God is my witness, as they say in these parts, Sophia said: "No, it's Earth Day. We can't use a plastic straw."

Obviously that was something her friends discussed at TutorTime yesterday afternoon.

Burnaby boring: by the numbers. Incredible. The bore diameter is 4.43 meters or almost ten-feet across. The Canadian tunnel will be:

REI: what better way to celebrate Earth Day than in a gas-guzzling SUV?

Surprise, surprise: not only did the US Supreme Court shock the US Congress, the Supremes did it unanimously. That FTC practice based on a 1973 law must have been really, really bad for the court to agree 9 - 0 on the case. Next year will we see some 13 - 0 decisions? Forty-eight years of unconstitutional government over-reach.

Chip shortage: only the Covid-19 pandemic may last longer.

Intel on Thursday said first-quarter sales fell 1% to $19.7 billion, beating Wall Street estimates. Net income, weighed down by costs of a legal settlement, was $3.4 billion. Excluding the pending sale of its memory business and other items, Intel said revenue was $18.6 billion and net income was $5.7 billion.

AMD: well-positioned with acquisition of Xilinx.

KMI: we mentioned this yesterday, but here's another look. This story, unlike the first one I linked, was obviously not written by a robot. Kinder Morgan also raised its dividend by 3% to $1.08 per share for 2021.

Poetry in motion: from social media -- if you want to compete, your submission will be submitted for the Rhysling Award. 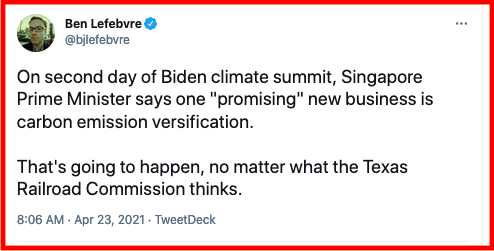 I almost want to quit blogging today. It can't possibly get any better.

What rhymes with Greta?

Crude oil production in U.S. shale and tight-oil plays still hasn’t recovered fully from the demand destruction wrought by COVID-19 in the last year or so. It could be argued, though, that producers in the offshore Gulf of Mexico (GOM) have faced even tougher times as they had to deal with not only pandemic-related staffing issues and project setbacks but the most active hurricane season on record. Offshore GOM production averaged only 1.65 MMb/d in 2020, a 13% decline from the previous year and the lowest since 2016. By August, production fell to less than 1.2 MMb/d, the lowest for that month in seven years. Many new projects were delayed as well, but things may finally be looking up, with first oil from a number of projects coming later this year or in early 2022 and final investment decisions (FIDs) on two major projects expected soon. Today, we discuss the wild ride that GOM producers experienced in 2020 and whether better days can be expected in the future.