US Crude Oil Production Climbs To Highest Level In More Than A Year -- April 12, 2017

Apparently for US producers, $55-oil is just fine. From Bloomberg:


Crude retreated for the first time in seven sessions after a government report showed U.S. production climbed to the highest level in more than a year, offsetting data on declining stockpiles.

If you look really, really, really closely, you can just barely see the "retreat" in US crude oil reserves (white line) (LOL). On the other hand, even without reading glasses one can spot the increase in production (blue line): 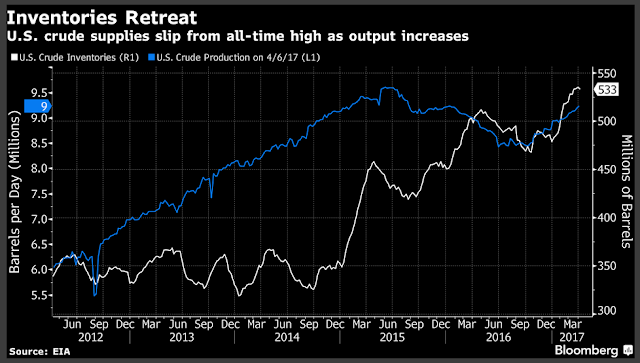 This is the first time I've paid attention to the crude oil reserves graph. Look at that surge in 1Q15. That was the first quarter after the Saudis declared the end to quotas, I believe.
Posted by Bruce Oksol at 9:25 PM No comments:

April 14, 2017: Saudi DEBT BINGE amid oil gains eases bank liquidity drought. It still begs the question: why does a country with almost $600 billion in foreign reserve assets and improving oil prices need to raise $9 billion in a bond issue? From Bloomberg:


As the country finalized its first issue of dollar-denominated Islamic notes, six months after selling the biggest ever bond by an emerging market country, an interest rate used by Saudi banks to price loans stood at its lowest level in almost 14 months.

That rate, known as Saibor, will probably fall further after the latest sukuk issue.

Saibor has been falling since reaching a seven-year peak of 2.386 percent on October 17, immediately before the country’s debut dollar-bond sale, as oil export revenue dwindled, sending the state budget into deficit. Cost cutting by a government usually associated with vast reserves of petrodollars, and a drawing down of its bank deposits to prop up spending, prompted a cash squeeze in the economy, helping drive Saibor higher.

Original Post
For background to this article, newbies may want to follow the "SaudiReserveAssets" tag at the bottom of the blog. From The Wall Street Journal today: Saudi Arabia raises $9 billion in first international "sukuk" issuance. The "sukuk" (bond) sale comes as the kingdom pursues an ambitious plan to reshape its oil-focused economy. Wow, talk about a lot of story lines:
Other data points from the article:
From the article, some numbers rounded:
Most interesting:

Also, from The Wall Street Journal: Volkswagen is adding another SUV in Tennessee. The German auto maker will build a five-seat SUV at its Chattanooga factory in addition to the larger seven-seat Atlas.


Volkswagen in 2014 disclosed its decision to build the seven-seat model at the Chattanooga factory, investing $900 million and adding 2,000 jobs. The unnamed SUV that Mr. Woebcken described on Wednesday has manufacturing characteristics similar to the Atlas, leading Volkswagen to steer its production toward the U.S.

“Since it shares the same architecture, the same supply chain, the natural harbor for this product is Chattanooga, ” Mr. Woebcken said.

Speaking of cars, the first thing I thought of when I read this article -- "This is how one takes on Tesla."

From Fox News, the 2018 Dodge Challenger SRT Demon is an absolute beast. Data points:
Much more at the link. But this is how you take on Tesla.

Posted by Bruce Oksol at 8:29 PM No comments: 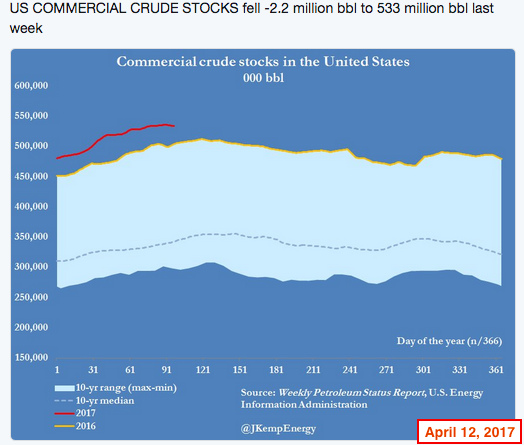 The next two graphs are particularly interesting: 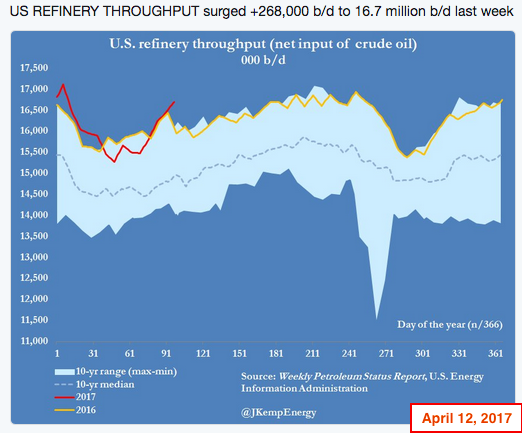 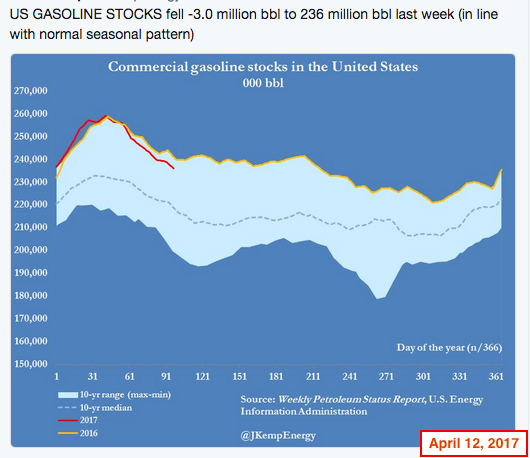 Newbies May Be Interested In Older Well With Bump In Production -- April 12, 2017

Newbies may be interested in this, posted earlier this morning.

One well coming off confidential list Wednesday:
In addition to that well, another example in the same area where wells are currently being drilled (though the paperwork/reports may lag activity in the field).

This is really, really cool. When we lived in San Antonio, one of our favorite restaurants was the Acadiana Cafe. I was always curious about the name but not curious enough to see if I could find the origin of the name. It turns out to be very, very straightforward, and I'm about the only one, I'm sure, who did not know the etymology.


I grew up in Upper Canada, as those from the eastern provinces like to call it ... I have since learned to appreciate the depth of humanity that seems to overcome the poverty and loneliness that can go along with a sea-based economy.

Natives of Nova Scotia and New Brunswick, like their Scottish and Irish ancestors, are professional storytellers. The true masters among them come from the northeastern corner of Nova Scotia, Cape Breton Island, which is separated by a very narrow strait from the rest of the province.

Here Celtic roots combine with traces left from the Acadians, the French populace who were forced out of this area by the British over 200 years ago. Some of the expelled Acadians later settled in Louisiana, where the word Acadian evolved into the term cajun.

Bakken boom: Williston's school district is studying need for yet another new school. I love the second of these two next paragraphs, just thinking about all those happy, smiling kids, really, really, enjoying what the Great Plains have to offer:

Williston’s population has grown by 65 percent since 2010, according to the latest estimates by the U.S. Census Bureau. The school district enrolled 3,780 students in fall 2016 — a 60 percent increase from the 2009-10 school year.

While enrollment continued to rise even amid a downturn, it isn’t the source of alarm. It’s instead the birth rate and the few years before those newborns become the district’s incoming kindergarteners.

Hess: shares could rally 60% in the next year -- Bank of America. I don't follow Hess share price so have no comment. However, Hess has placed a lot of new infrastructure in place in North Dakota and it seems natural gas is becoming a bigger and bigger deal for the oily Bakken.

Alaska pipeline: yet another story on challenges for the 800-mile Trans Alaska Pipeline System due to very sluggish flow due to low volume. Alaska's output was 565,000 bopd last month, down from a peak of more than 2 million in 1988. I think they've been talking about this problem for years.

Trend: it appears most blog sites / most business articles suggest oil will trend higher toward the end of 2017.

OPEC staying true to their word? OPEC cut oil output in March by more than pledged.

More OPEC: wow. From twitter -- former advisor at Saudi Arabia's oil ministry, now the World Energy Council vice chairman, says oil market needs $70 - $80 over the next decade to balance. That's a far cry from the $100 that Saudi Arabia used to base their annual budget on, and the vice chairman is talking about a) the next; and, b) the decade. That's a long time.

Peak oil? What peak oil? From the EIA: 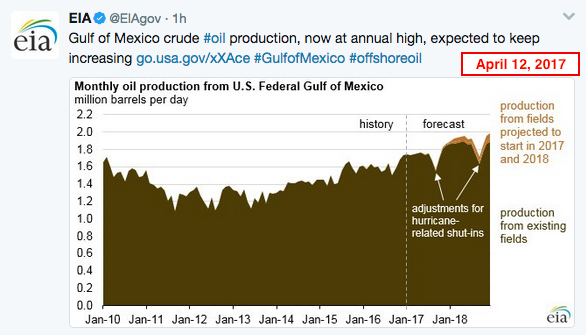 Note that the Gulf of Mexico will not reach 2 million bopd even by the end of 2018 (forecast) and yet the Bakken could produce 2 million bopd if unfettered (forecast). Just helping me to put things into perspective. The USGS says the Permian is 3x larger than the Bakken, which takes us to 6 million bopd, and then, of course, we have SCOOP/STACK, and the Niobrara. The EIA estimates that the US will produce 9.9 million bopd in the next couple of years.
Posted by Bruce Oksol at 7:34 AM No comments:

Trump wins special election in Kansas. It's sort-of-big news that he won; it would have been a shot heard 'round the world had he lost. Dems apparently poured money into this race and predicted a Democratic win. I don't know. I just saw the results.

Another book in the O'Reilly series? The end of his show?
Posted by Bruce Oksol at 7:34 AM No comments:

Scott Adams: robots read news about United Airlines.
Posted by Bruce Oksol at 7:33 AM No comments: