A reader sent me these two links. I was not going to post them until tomorrow, but they need to be posted tonight -- the two stories:
From the second linked article:


Buying the pipeline outright has become increasingly likely and is now the most probable option, the person said, speaking on condition of anonymity because the discussions are private. The deal, a value for which hasn’t been publicly reported, will be announced as soon as Tuesday when Prime Minister Justin Trudeau’s cabinet is due to meet.

Canada first offered to indemnify the expansion project but is now likely to instead buy it in full. The Canadian government plans to sell the project -- the existing line and its expansion -- as soon as is reasonable once it’s guaranteed that it will be built, the person said. It’s unclear if other Kinder Morgan assets will be included in any sale.

My reply to the reader follows. The reply is not ready for prime time, but I think it adequately reflects my initial thoughts:


This -- Canada paying for, buying, whatever one wants to call it -- is really, really bizarre. I don't know what you think about it, but it seems pretty pathetic when one province can shut down a critical project like this that affects the entire country.


This is not similar to the Keystone XL. The US has such a huge economy and is so diversified, that one pipeline did not have a huge effect on US GDP. However, Canada has little except its natural resources -- such as oil. This action by Trudeau -- an environmentalist -- shows just how important he thinks his project is.

Pelosi played? Laughed at Trump but less than 48 hours later, it appears the June summit is still "on." Time will tell.

Disclaimer: this is not an investment site. Do not make any investment, financial, job, travel, or travel decisions based on what you read here or what you think you may have read here. 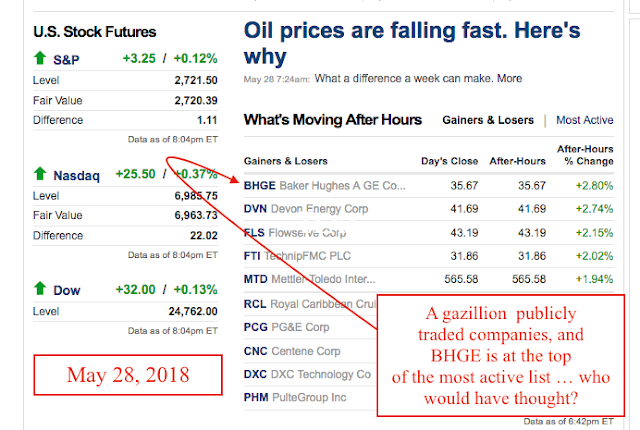 WTI, futures: $66.76. Continues to fall. So much for all that $85-oil talk. Much less, $100-oil talk. And this is simply because OPEC-Russia talking about adding one million bopd in production (against a global production of 100 million bopd). Just wait until US production data comes out for July, 2018, data. Lynn Helms opines that North Dakota will set an all-time oil production level in June (official data will be released in August, 2018 -- but Lynn Helms is seldom wrong with regard to these sorts of things; more on this later).

So, which is it? Last week there was a story that suggested US crude oil exports would be inconsequential, mostly because US light oil not in high demand overseas. I did not bother to post it / link the story -- did not interest me. Now tonight, one of the chief contributors to oilprice.com says that US crude oil exports will continue to increase:


U.S. oil exports already hit a new record at 2.566 mb/d for the week ending on May 11, before dipping a bit in the most recent week. But, the trend is clearly up – last year, exports bounced around between 0.5 and 1.5 mb/d, hovering close to the upper end of that range in the second half of the year. For most of 2018, U.S. weekly oil exports have been hovering around the 2 mb/d range.

Exports could average around 2.3 mb/d in June, one prominent oil executive told Reuters. The wider the discount between WTI and Brent, the more U.S. oil will find its way to Asia, despite the long distances.

And at $9 per barrel – the largest in three years – there will be tremendous pressure working to push more barrels out from U.S. ports to buyers around the world. That is, as long as U.S. shale drillers are able to find a way to get their oil from West Texas to the coast.

Permian and trucking: the other day I mentioned that things are going so badly for the Canadian government that operators in the Canadian heavy oil sands may have to literally "truck" their oil out of Alberta. Interestingly, operators in the Permian may find themselves in the same "boat." Or should we say, "the same truck"? Same link over at oilprice.com as above. I'm being told that a US truck manufacturing plant is unable to keep up with all their new orders. In addition, this is affecting all US truck manufacturing plants: it turns out that ALL such plants use many of the same basic components, such as engines and transmission. From the article:


That means that the Permian pipeline system is essentially maxed out. There is now a rush of demand for trucking oil from West Texas to the Gulf Coast, a bizarre side effect of the bottlenecks that have cropped up. Moving oil by truck is costly, so Permian drillers that have not already secured pipeline capacity are being forced to discount their product in order to secure sales.

Gold: for me, personally, this is a most timely article. Mike Fitzsimmons makes a case for gold. Ignore the politics, but pay attention to the facts:


CNBC recently reported on Goldman Sachs' view that the fiscal outlook for the U.S. "is not good". After the recent "tax reform" and $1.3 trillion spending bill passed by Trump and the Republican controlled Congress, that appears to be the understatement of the year.

Goldman Sachs chief economist Jan Hatzius thinks the federal deficit will balloon to $2 trillion over the next 10 years. Isn't it ironic that the two main proponents pushing Trump's "tax reform" plan (one that included massive tax cuts to billionaires and corporations) were former Goldman Sachs executives: current U.S. Secretary of the Treasury Steve Mnuchin and Trump's former chief economic adviser Gary Cohn? Apparently all the criticism Trump heaped on Hillary Clinton during the campaign for her close ties to Goldman Sachs was just for show. It's business as usual in Washington.

NBA: a few days ago I mentioned that I hoped Cleveland Cavaliers would win their conference. I flipped. Just a few days before that I was "for" the Boston Celtics. The Cavaliers won their conference last night, 87 - 79, I believe. I listened to the game on Sirius NBA XM while driving cross-country last night. Today, I listened to commentators dissect the game. They must have all been from Boston. They seemed quite surprised / stunned / disappointed that the Celtics had lost. I was thrilled.

NBA: tonight, half-time -- the Houston Rockets are in control. Huge win by Golden State Warriors -- by the end of the third quarter, no longer even a game. Turned the television off well before the end of the game.
Posted by Bruce Oksol at 7:39 PM No comments:

Still Traveling This Memorial Day Weekend -- No Serious Blogging Until Tuesday, May 29, 2018

Beautiful, beautiful weekend across the central and northern midwest and southwest. Absolutely gorgeous.

I will talk about it later when I have more time. Can't say it enough times: best country in the world.

I was just getting ready to sign out and get back on the road, but checked Drudge Report first -- saw the top story just loading -- EU proposes to ban plastic straws and Q-tips. Our extended family got into a discussion on plastic straws yesterday -- before the Drudge Report link -- I was quite blown away by how "sensitive" and "polarizing" the plastic straw issue is. The plastic Q-tip issue? We were unaware of it. Another first world problem. A gazillion kids in Africa, the Mideast, and Asia would love to have that problem -- whether or not plastic straws were available. We are quite fortunate.
Posted by Bruce Oksol at 1:53 PM No comments: