Flashback to an earlier post.
Posted by Bruce Oksol at 8:38 PM No comments:

We've talked about this before. US operators bring a) transparency; and, b) guarantees when it comes to delivering oil.

The Financial Times is reporting that India is looking to the US as it seeks alternatives to OPEC. India is complaining that Saudi Arabia is curtailing supplies and is marking up their prices.


The US, he noted, had some fields that were able to produce economically at $25 a barrel, as costs have come down after the price collapse that has entered its third year.

“The energy business has changed very fast in recent years,” he said. “We can’t put all of our eggs in a single basket.”

Mr Pradhan used his meeting with OPEC delegates to air grievances with the group of producers from which India sources 86 per cent of its oil supplies. This feeds into its refineries that have processing capacity of 4.6m barrels a day.

He said despite the collapse in prices since the middle of 2014, Asian customers traditionally dependent on Middle Eastern oil to meet their energy needs continue to pay a premium for crude compared with buyers in Europe or the US.

India said oil output cuts by OPEC producers could prove a threat to its energy security, which together with higher prices, is pushing the world’s third-largest crude consumer towards alternative suppliers.


Five new permits:
Nothing else of note in today's report.
Posted by Bruce Oksol at 6:05 PM No comments:

Over at Business Insider. The article provides insight about Ford's decision to accept Mark Field's decision to retire. It also provides insight on the relationship between Ford and Silicon Valley. In addition, we get insight into where the phenomenon of driverless vehicles is headed (essentially nowhere for quite some time). There's even a bit of Apple, Uber, and Lyft in the article. And, finally, for me, some investment ideas. 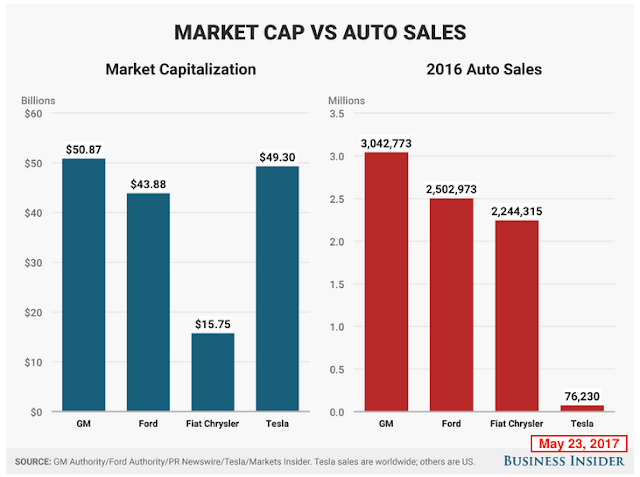 At the height of the recent Bush-Obama recession, 46 million Americans were on "food stamps."

The numbers (in millions) are +/- a few million, but the point is made. From an OMB budget briefing.

From Joshua Hammer's essay, "Egypt: The New Dictatorship," in the current issue of The New York Review of Books.


In the norther Sinai Peninsula, an Islamic State-affiliated group called Sinai Province has launched an alarming number of attacks on security forces in recent months.

International peacekeepers describe the fighting in Sinai as starting to resemble the conflict in Afghanistan, with a commmitted army of religious fundamentalists, rocket and sniper attacks on foreign military observers, and defections by government troops angered by the state's persecution of Islamists.

Some Egyptian intelligence officials believe that Jihadists, facing pressure in other parts of the Middle East, are intent on opening a new front in Egypt. Man of the six hundred Egyptians believed to have fought with the Islamic State in Syria and Iraq have apparently abandoned the conflict in recent months and drifted home. With its erratic security forces, proximity to other jihadist battlefields, large Christian minority, repression of Islamists, and large population of Muslims unmoored and angered by the authoritarian rule of [General Abdel Fattah el-] Sisi, Egyp may present a rich opportunity for jihad. 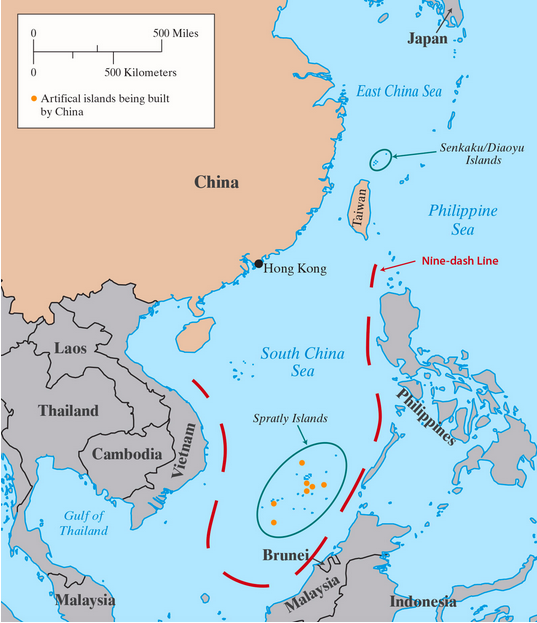 Between 2013 and 2015 China built more than three thousand acres of new land in the South China Sea by occupying and expanding shoals and reefs just off the coast of the Philippines into islands big enough to support radar stations, runways, and docks for its growing navy. In the Spratlys alone it built 1.1 square miles (or about seven hundred acres) of new land; all the original islands and reefs in that island chain only covered two square miles.

Had I never blogged about the Bakken, I most likely would have never had a "feel" for 1.1 square miles.

It appears that the Pacific Coast Highway - at least some of it is going to be closed for quite some time. I assume Governor Brown will ask for federal money to help open/repair the road.

Video here.
Posted by Bruce Oksol at 11:20 AM No comments:

Over at "wells of interest."

Comment: regardless of the reason for this jump in production, there are many, many examples of (unexpected) increased production in "older" wells in the Bakken. One has to laugh: "older wells" in the Bakken -- only two to three years ago in this case and many other cases; this could greatly affect EURs; and is certainly a component of Bakken 2.0.

This is from Ingrid D. Rowland's essay, "Martin Luther's Burning Questions," in the current issue of The New York Review of Books.


2017 is the 500th anniversary of Martin Luther posting his "95 theses" on the door of the church attached to the local lord's castle.

Martin Luther focused his ire (and most of the ninety-five theses) on one particular practice of the institutional church: the sale of indulgences.

These papal dispensations, confirmed by paper certificates, grew out of a traditional medieval conviction that prayer, repentance, good works, and pilgrimage could atone in some measure for sin. It was even possible to do penance for someone else ... giving alms or endowing a church could also earn remission from sins, reducing the amount of time ... [one's soul] would spend in Purgatory...

By the late fifteenth century, however, remission from sins could simply be purchased from a papal agent, for oneself or for another person, whether alive or deceased.

The sale of indulgences became an industry only in Luther's own lifetime and in his own lands, put into place by Pope Julius II and the Augsburg banker Jakob Fugger.

After 1506, pope and banker directed the revenue from German indulgences toward the rebuilding of Saint Peter's in Rome.

Huge amounts of [German metal [gold, copper, lead, iron] was being sent to Rome and Germany was] receiving printed slips of paper in return for the equivalent of checks that drew on the currency of heaven rather than Earth.

Jakob Fugger [the Augsburg banker] took a 3 percent cut -- in coins, not release from Purgatory -- on every every shipment south.

It is any wonder that the man who finally pulled the plug on this improbable trade knew a thing or two himself about the value of metal?

It appears Faulkner considered himself on the side of the line in which he could use the word with impunity.

Other quick notes, all from the article, not my words:

The writer mentions Mary Chesnut who wrote the "great diary before the Civil War" -- a copy of which I have, but it's out in California.

Terminology:
One last note: either incredibly coincidental or very, very well planned by TNYR -- just a few pages later, in the same issue, a selfie/photograph of Mary Miller, in front of a pond in Oxford, Mississippi. Mary Miller is a "minimalist" author, contemporary. The essay was written by Joyce Carol Oates. It was probably not coincidental. Mary Miller's three books: Always Happy Hour, The Last Days of California, and, Big World.

Known To British Authorities Prior To The Attack -- Another Male Of Interest Picked Up Within Hours Of Explosion -- May 23, 2017

Manchester: CBS News confirmed Tuesday that the man who blew himself up the previous night at an Ariana Grande concert in Manchester, England, was 23-year-old Salman Abedi, who was known to British authorities prior to the attack. 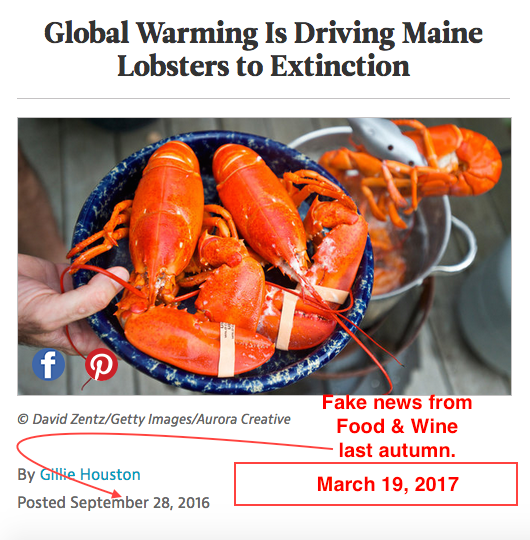 Finally, Bloomberg got around to reading the blog and posting their own story. First, the screenshot form the Bloomberg story: 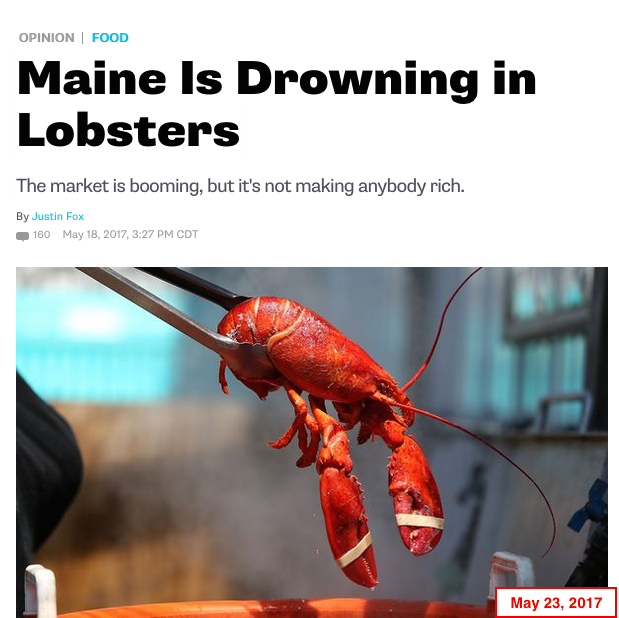 From the linked Bloomberg article:


Since the late 1980s, catches have been at record-high levels despite decades of intense exploitation. We have never produced so many lobsters. Even more interesting to managers is the fact that catch levels remained relatively stable from 1947 to the late 1980s.

While scientists do not agree on the reason for these high catches, there is a growing consensus that they are due, in some measure, to the long history of effective regulations that the lobster industry has played a key role in developing.

Acheson calls this "parametric management" -- the rules "control 'how' fishing is done," not how many lobsters are caught -- and concludes that "Although this approach is not supported by fisheries scientists in general, it appears to work well in the lobster fishery."