I guess I wasn't paying attention.

I could be wrong, but that WTI-Brent spread seems very narrow.

OPEC basket is at $61.24, well below the IMF break-even for Saudi Arabia. 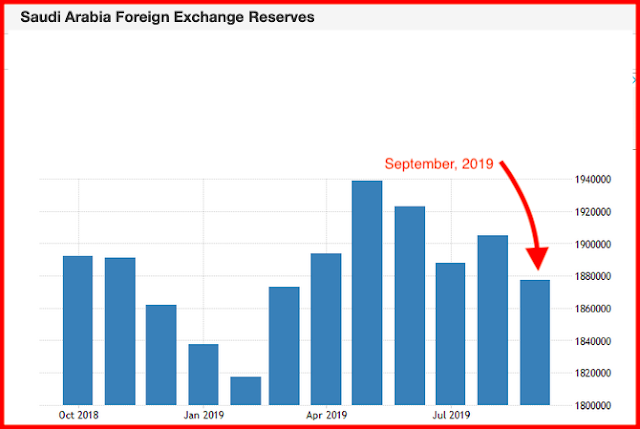 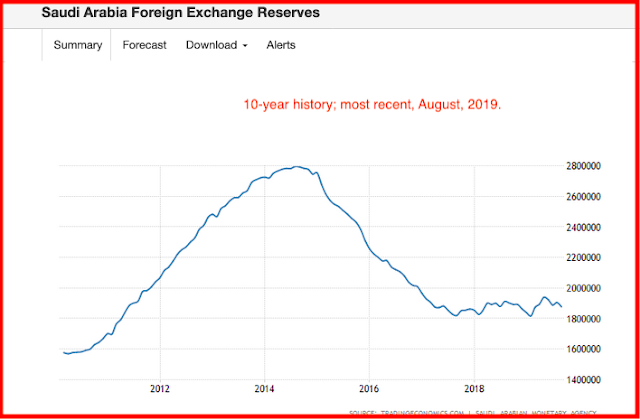 Businesswomen in the Bakken: from ozy.

Make my day! Beto withdraws from presidential race. Julian Castro next? Then Kamala?

Market: a most incredible day; both NASDAQ and S&P 500 set new all-time records; Dow up over 300 points; what just happened ... let's count the reasons ...

But, does it make sense? GDP at 1.9% and trending lower. Two things:
Reality sucks, state estate tax:
Disclaimer: in a long note like this there will be factual and typographical errors. If anything mentioned in the blog is important to you, go to the source.

Market: most incredible action today -- remember -- this was sent to me by a reader yesterday -- yesterday, October 31, 2019, last day that mutual funds made changes to their portfolios before "going final" for the year. Stocks sold off yesterday as mutual funds locked in profits. So, "stuff" was beat down a bit yesterday .... today .... mutual funds moving in with direction from the top to buy. There seems to me to be a huge FOMO ... fear of missing out.

Note: the new Apple TV+ television show "Dickinson" is NOT a spin-off from the Coen Bros' "Fargo."

European Wax Center: moving from South Florida to Plano, TX. Will close Florida and New York offices. Speaking on the move, a spokesperson for EWC, said that a significant reason for the move to Texas, specifically, Plano: the existence of a large pool of technologically-astute workers. Hmmm. Then a light bulb went off. Literally just down the road from Plano is University Texas Dallas -- UTD. Over the past two years I have been on the campus every few weekends and visited many weeks on a daily basis during the summer. I was amazed how fast this "new" campus has been growing, and it appears that its niche is technology. Our two granddaughters took software / computer coding summer courses at UTD during the past two summers. It is obvious that UTD is becoming the "farm team" for tech companies on the north side of DFW airport. This is a pretty big deal for what it represents.


Sempra announced last September the first of a multi-phase initiative to optimize its portfolio, spinning off solar and battery storage and other renewable assets for $1.54 billion to Consolidated Edison. That acquisition, which included one wind facility, involved about 980 MW of installed capacity.

Sempra's activist investors, Elliott Management and Bluescape Resources, have called for the company to spin off its U.S. liquefied natural gas (LNG) businesses and its businesses in Latin America. The company created a new LNG and business development committee in September as part of an agreement with the investment management firms. 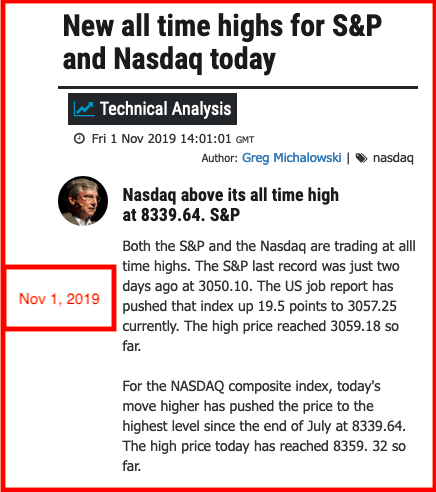 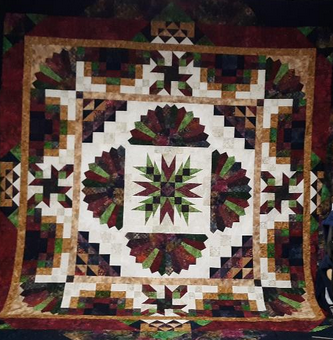 The Real Reason Trump Is Moving To South Florida -- To Get Out Of The Way Of Global Warming -- November 1, 2019 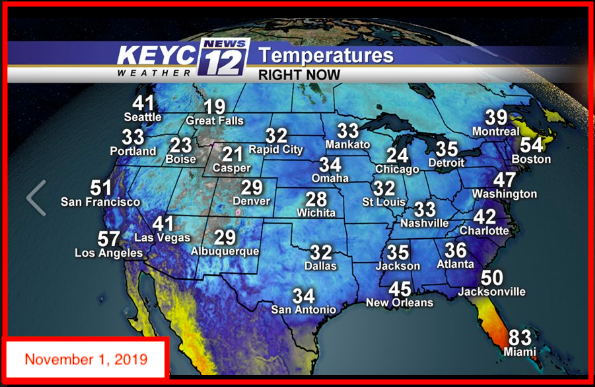 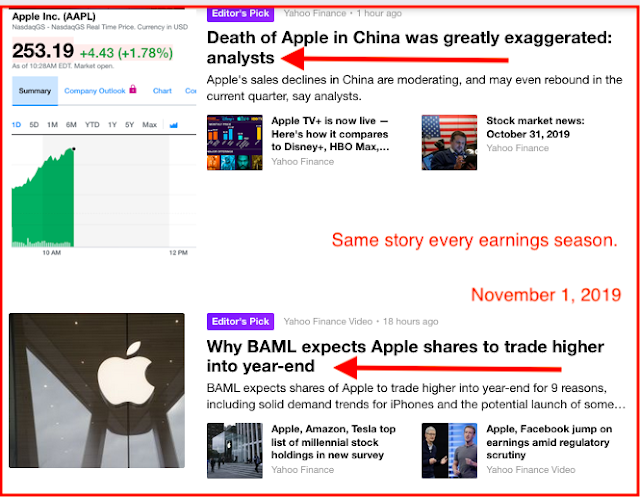 Incredible October Jobs Report -- What Was The Fed Thinking? Notes From All Over, Part 2 -- November 1, 2019

The CLR Morris wells in Oakdale oil field have been updated.

BR's Midnight Run wells in Union Center have been updated.

The Enerplus' "Bush" pad in Mandaree oil field has been updated.
Posted by Bruce Oksol at 7:28 AM No comments:

CLR's Hereford Wells Have Now Been Fracked And Are Coming Off The Confidential List -- November 1, 2019

They are all going to be great wells.

In addition, we will see great examples of advantaged oil

This one is particularly interesting, though it is back on the conf list:
Example of advantaged oil:

For newbies:
Most recent jump in production is well better than what this well did when it was originally drilled, completed, and tested back in 2010:


The wells, a 10-well pad, from the south, running north:

From the north, running south:
For newbies:
Of the sixteen Gunslinger Federal permits (one now canceled):
Graphics: 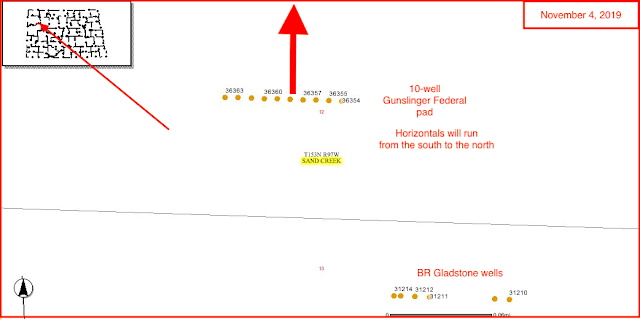 Advantaged oil: this does give me the opportunity to remind newbies to look at #20026 again. This is happening all over the Bakken.


RBN Energy: will new crude oil export terminals be "frozen" in favor of expansions, instead? Does it matter?


In our blogs and at our 2019 School of Energy a couple of weeks ago, we’ve spent a lot of time discussing the ins and outs and pros and cons of a multitude of proposed crude oil export terminals. What we’ve come to believe is that, with U.S. production growth appearing to slow and market players fearful of overbuilding, many of these multibillion-dollar greenfield projects are unlikely to advance to financing and construction. Odds are that the midstream sector instead will focus on ways to add new capacity to existing terminals, even if that means still relying on reverse lightering in the Gulf of Mexico to fully load Very Large Crude Carriers (VLCCs). In today’s blog, we discuss why producers, traders and midstreamers alike may be pulling back from investments in big, expensive export projects, and what it could mean down the road.

Exports of oil, gas, and NGLs are still the topic du jour in the U.S. energy sector, and with good reason. From a crude oil perspective, the forward curve is not very exciting — prices in the low-to-mid-$50s as far as the eye can see — nor is it very supportive of faster production growth. Permian pipeline deals were all the rage in early 2019, but as the Gray Oak Pipeline begins line fill in November, that system will be the last big addition to the basin until 2021. Yes, there are some interesting developments in the Rockies, some possible new pipes in Cushing, and some marginal production gains in other spots around the U.S., but overall, there isn’t a whole heck of a lot of intrigue and mystery in most parts of the domestic crude market. That is, except for exports and how new and existing terminals will fare in their quest to move oil, gas, and NGLs to overseas markets.

First things first: it's cold across the US. I don't know if folks are paying attention but it's very cold for this time of year. I was caught off-guard; couldn't find my ice-scraper for the windshield this morning; I needed to use my Neptune Society plastic membership card.

First things first: the market was down yesterday so I did not check in -- at all, except to see if my cash account had grown (dividends) so that I could buy -- I assumed everything was on sale. After hours last night I started watching futures, and I watched futures go up all through the night. Right now the Dow is up 50 some points.

The market. So this morning, I checked a few companies. I was blown away -- I never expected this. I assumed they were going to all be in the "red." From yesterday:
I'm not interested in anything else this morning.

Politics: fascinating to follow the polls. Of course, meaningless at this point in time except for qualifications for debates and donors. With both Harris and Castro running out of money, one can only assume the same for most of the rest. Buttigieg will get a huge bump -- a headline -- out of Iowa but then will fade in New Hampshire. Remember, one must get 15% of the popular vote to be awarded any delegates. Buttigieg is polling at10% in New Hampshire. He's hardly even on the radar scope in any state outside of Iowa. But that bump would change things.

New York taxes: I think folks talking about Trump officially moving from NYC (and state) to Florida are missing a huge, huge story. This is the bigger story, actually two stories: a) Trump simply represents one of thousands moving from high tax states to low/no-tax states; and, b) the headline story will encourage those to move who have, for some reason or other, felt they couldn't leave. From the chief economist of the Heritage Foundation:


There are four so-called "states of the apocalypse” – New York, New Jersey, Connecticut, and Illinois – from where residents are fleeing in droves due to high taxes and state budget issues.

The states benefitting the most from this population movement are Florida, Tennessee, Texas, Utah and North Carolina.

Tennessee is always on those lists.
Posted by Bruce Oksol at 6:04 AM No comments: