I must be getting "numb" to all this. I completely missed this earlier today.


I completely missed that "75" is a new post-boom low.


Cheap energy has stronger companies across the industry—including exploration and drilling companies—eyeing weaker rivals. But deals have been few as buyout candidates hold out for richer offers. Dallas-based pipeline company Energy Transfer Equity LP. said it has been pursuing Williams for six months.

And it isn’t giving up, saying the proposed all-stock deal would be “the right merger at the right time.” Other pipeline giants also may enter the Williams bidding, said analysts.

Williams, which has roots going back to 1908, owns one of the most critical fuel links from Texas to New York and New Jersey, the 10,000-mile Transco natural-gas network.

The company also is building a line that will move natural gas from the Marcellus Shale in Pennsylvania to New York and New England.

Though little known outside of the energy patch, Energy Transfer has become one of top oil and gas transportation companies in the U.S. under the guidance of a trained engineer and music producer named Kelcy Warren. He started Energy Transfer in 1995 with less than 200 miles of natural gas pipelines in Texas; today the company controls an intricate network of 70,000 miles of oil, gas and fuel lines.

Geographically, a deal with Williams would give Energy Transfer an expanded footprint. Williams has significant fuel-moving capabilities in the northeastern U.S., while most of Energy Transfer’s pipelines are located across the south and Midwest. Since there is little overlap between their networks, Bank of America analysts said the two companies could combine without having to do much to placate antitrust regulators.

Much more at the linked article, of course. Also, this article.

As predicted. Link here. Anything is yet possible but the tea leaves are swirling.  If I read this all correctly, Greece gets the bailout money (plus more) simply for "promising" they will hit targets. Details by Friday if the deal gets done.
Posted by Bruce Oksol at 10:04 PM No comments:

UND trims list of nicknames to seven. See this post. Only one nickname works for me, possibly a second.

While the older granddaughters were inside the "pottery barn" working on some pottery projects this morning, the youngest granddaughter and I were enjoying the "new" patio rocking chair.  She and I saw it at Whole Earth Provision Company in Southlake and we both felt we could not live without it. It is a "solid" rocker and so much fun. We will take it with us whenever we go out and about, and if the older granddaughters want to shop, let them take their time.

We have the rocker. 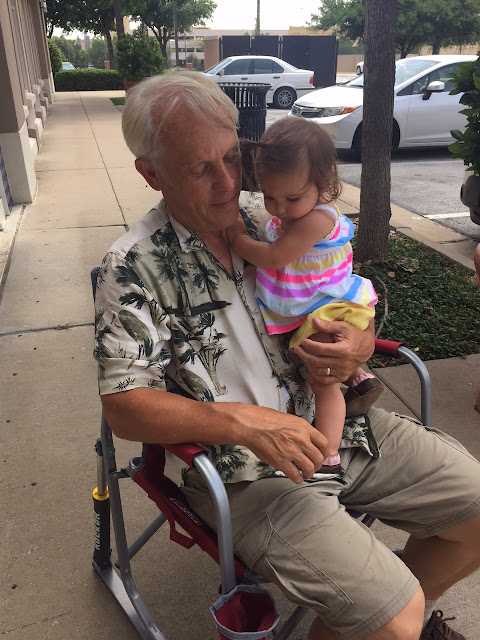 Note the little hydraulic "lifts" in the back. This just had to have been invented by some Scandinavian farmer / Bakken oil millionaire vacationing in Phoenix.
Posted by Bruce Oksol at 5:17 PM No comments:

I track Tesla here. Note the last update:
I'm posting that because there's a story out today:

A report surfaced this morning that the release of electric carmaker's new Model 3 might not come until 2018. It had been expected in 2017.

Still, Tesla shares have been on a steady climb after hitting bottom in March and are now about $35 dollars from their all-time high. Tesla--  with just a single model for sale now--  has a market cap that's more than half of those of General Motors, and Ford, and well above Fiat Chrysler's.

I guess this "cash problem" sort of explains Tesla's recent need to borrow $750 million, and it took 7 banks to come together to agree to the loan.

For newbies: Tesla is a battery company disguised as an automobile company surviving on tax breaks, subsidies, and grants.

July 22, 2015: now down to five. North Stars and North Dakota (whatever that means) were eliminated; I've updated the original post. LOL.

UND trims new nickname list to seven:
Only one on the list meets my criteria.
Posted by Bruce Oksol at 4:03 PM No comments:

The refinery on the banks of the Mississippi River in St. Paul Park plans $100 million in upgrades that by next year will boost its refining capability to more than 100,000 barrels of crude oil per day.

With that upgrade, on top of significant investment since 2011, the refinery will be able to refine 29 percent more crude than it did when Marathon Oil Corp. sold it in 2010 to new owners.

Today, 58 percent of the refinery’s crude oil comes from North Dakota — a level that’s expected to grow. Five years ago, 51 percent of its crude arrived from Canada.

“Five years ago, Bakken was barely known — it was a very small stream, a very small part of our business strategy when we bought the refinery from Marathon.”

The tilt toward North Dakota crude seems like a logical step for refineries in the U.S. midcontinent, especially as direct-to-refinery pipelines become available.

US home sales jump in May, average prices close to 2006 peak. Short supply.

I was just called by our oldest granddaughter to join them in an outing this morning, so I will be off-the-net in a few minutes.

I will be back later today or later this evening.

Mount Olymbus, Lesvos
And yes, that's the "correct" spelling. For both. I Want Tomorrow, Enya.

How "real" is the WMB - ETP story? Not very. Enbridge is flat on a day the market surges 135 points in early trading. KMI not much higher; OKE up 3% but it had fallen so far to begin with.


From the first quarter of 2014 to the first quarter of 2015, medium-grade crude oil imports to Gulf Coast refineries decreased 45%, from 1.5 million barrels per day (b/d) to 0.8 million b/d. On the other hand, over that same period there was a 0.4 million b/d (22%) increase in imports to Gulf Coast refineries of heavy crude oil. Improved refining margins from processing additional volumes of heavy crude have resulted in a 3% increase in gross atmospheric distillation unit (ADU) throughput in the Gulf Coast region over this period, from 8.0 million b/d to 8.2 million b/d. -- EIA


The biggest fundamental price indicator in the natural gas market -- Energy Information Administration’s (EIA) Weekly Natural Gas Storage Report – is about to get a major makeover. The EIA is planning to split the US gas inventory data into five regions, from three macro regions currently. The idea has been floating out there for a while, but now it looks imminent, with a good chance it is rolled out before the gas winter season comes around in November. When it does happen, the increased granularity will vastly improve the transparency of natural gas storage inventory data on a weekly basis. But there’s another reason it will be a big deal when it happens:  It will break everybody’s storage scrapes and models. Storage modelers and forecasters will have their work cut out for them. In today’s blog, we break down the upcoming changes.

EIA’s weekly gas storage report, which quantifies changes in natural gas storage inventory from the previous week, is easily the most closely watched piece of fundamental data in the US gas market. The weekly inventory number, which is reported on a national and regional level, reflects the tension (or lack thereof) between supply and demand, and has a big impact on price sentiment.

The market tunes in each Thursday morning at 10:30 AM EST for the release of the storage inventory data to determine if the supply demand balance is loosening or tightening, relative to history and also relative to expectations, and a flurry of trading activity usually surrounds its release. As such, an entire cottage industry of forecasters at banks, trading shops and analytics companies exists around predicting what the EIA numbers will be each week. Their models are built to predict what the EIA will report and, after the fact, the data is treated as the benchmark by which to recalibrate supply demand models. These models typically are built to emulate the EIA storage regions and then aggregate up to the total US. Thus, changes to the EIA report will change not only the mechanics of how the models ingests and aggregate the data but also the assumptions and calculations behind them.


Baxalta, a biopharmaceutical company based in Deerfield, Illinois, will join the index after the close of trading June 30. QEP, an oil and gas company, is being replaced because it's near the bottom of the index.

Priceline Group Inc. will replace Baxter International Inc. in the S&P 100. Baxter, which is spinning off Baxalta later this month, will remain in the S&P 500.

WPX Energy purchases 14,300 acres in the San Juan Basin's Gallup oil window, for ~$26 mln : The acreage purchase represents an estimated 100 gross drilling locations, boosting WPX's tally in the San Juan Gallup to approximately 500. WPX now owns or controls approximately 100,000 acres in the core of the Gallup oil window where it has spud more than 100 wells following a successful discovery in early 2013.

Goodrich Petroleum says that it has commenced completion operations on two of its six drilled but uncompleted wells in the Tuscaloosa Marine Shale; Reaffirms Q2 CapEx : The B-Nez 43H-1 (70%WI) and B-Nez 43H-2 (74% WI) wells in Tangipahoa Parish are near completion of fracture stimulation, with flow back and initial production expected within 1 - 2 weeks. The Company currently anticipates completing the remaining four drilled but uncompleted TMS wells from mid-July through early September. All six wells, which are located within the Company's core acreage position of 150,000 net acres, will be completed prior to the fall borrowing base redetermination scheduled for October 2015.

Let’s first look at Williams Companies Inc in which Lone Pine Capital held a total of 12.02 million shares with a market value of $607.85 million at the end of the first quarter of 2015.

The investment represents 2.3% of the fund’s total holdings, and being a new purchase, it’s a significant investment, even for a company with billions in equity exposure. Let’s try to understand why an experienced investor like Mandel would want to own a stake in the Tulsa, Oklahoma-based energy company.

Moreover, this is one of the companies that embraced what has been widely referred to as the “Internet of Things”, having installed sensors in its pipelines for decades. While this might have appeared unimportant at the initiation stage, a new app has made it an important aspect of the company’s operations, helping in monitor and resolve detected slowdowns in the flow of natural gas. The app, called Pi, has made it possible for the company to boost its revenue by between $1-2 million. Over the past three months, the company has registered 3.11% growth. In Williams Companies Inc’s most recent results, it posted $0.16 in earnings per share, beating Thomson Reuters’ consensus estimate of $0.15. Williams Companies Inc’s earnings per share for the same quarter last year was $0.28.

There was a "first" in that story, but no "second."
Posted by Bruce Oksol at 8:44 AM No comments: