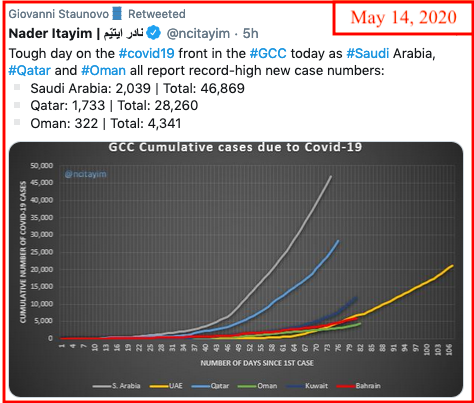 See this link. On this date, Saudi Arabia jumped to #8 among countries with most new cases. #8. Wow. This should get the attention of analysts.
Posted by Bruce Oksol at 10:03 PM No comments:

Later: this is clearly an error but it was interesting for a moment.

We will have to sort this out tomorrow unless there's news tonight or a reader can explain it.


OPEC basket: $17.00 -- at oilprice.com -- I can't find anything on this; not reflected at "official" OPEC website, where it still shows $23.25/bbl; this has to be in error, but it's unusual to see errors of this magnitude at oilprice.com; note Brent jumped almost 7%; here's the screenshot:

If this is accurate, it could be a "calendar"issue like the one that dropped WTI into negative territory.

I can't find anything over at Twitter to explain this.

But it's interesting to speculate.

Saudi Arabia has a severe cash flow problem (previously posted) -- paying daily rates averaging $50,000/day or more for VLCCs / ULCCs with at least twenty of them off Long Beach Port with no plans to unload -- is Saudi Arabia looking to unload those VLCCs / ULCCs regardless of cost / loss?

I really don't know but a 30% drop in the OPEC basket has to be in error unless it can be explained.

Later: a reader commented - this is definitely an error. So, we'll see a correction first thing in the morning.
Posted by Bruce Oksol at 5:46 PM No comments:

For now, just a song or two, nothing much going on in my little world. On my way to looking for something else:

I've posted this before:

Development for the movie The Girl With The Dragon Tattoo began in 2009 by Sony Pictures Entertainment.

Three peas in a pod, as they say.
Posted by Bruce Oksol at 3:35 PM No comments:

OPEC basket: $17.00 -- at oilprice.com -- I can't find anything on this; not reflected at "official" OPEC website, where it still shows $23.25/bbl; this has to be in error, but it's unusual to see errors of this magnitude at oilprice.com; note Brent jumped almost 7%; here's the screenshot:

This is unprecedented. That's more than twice what would be healthy for the oil industry.

By the way, I was wrong on this. I thought "days supply" would max out at 38 days. Maybe 39 days. I forget what I wrote about a month ago.

There are two variables; I forgot about the second variable. I was only looking at the first variable.

Actually, the first variable is not a variable at all: it is a fixed number -- relatively fixed -- the amount of onshore storage. Of course that is not "completely" fixed but week-to-week it should not change much.

The second variable is a true variable and requires a talent for very sophisticated calculus and a crystal ball -- neither of which I have -- and that's "demand."

If one assumes "steady demand," then "storage" becomes the only "relative" variable.

But if demand for the foreseeable future drops to zero, a ludicrous proposition, then any amount of oil in storage would be "an infinite number of days in storage."

And as long as I've digressed this much, the on-shore US storage greatly under-estimates the amount of oil that affects the EIA's "US days of supply." Certainly those twenty or so VLCCs/ULCCs off the coast of Long Beach holding Saudi oil would have some effect. Like so many data points, the US days of supply is simply one data point, and I guess, not a very good one at that, either.

A reader by the way, via comments suggests there may be some under-reporting of US production. To back him up: 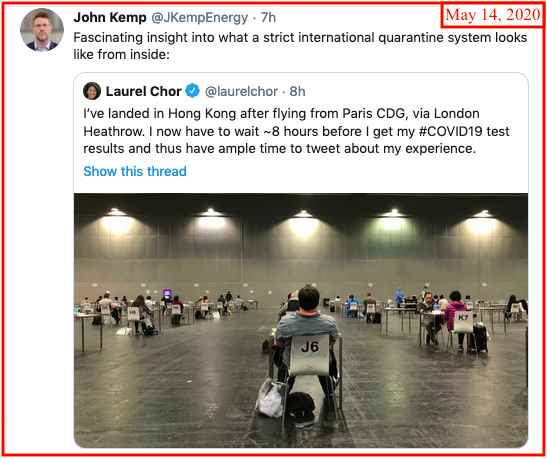 Email ThisBlogThis!Share to TwitterShare to FacebookShare to Pinterest
Labels: Storage_Crude_Oil

California Plan To Prevent Some Homelessness -- May 14, 2020

$80 billion -- that's the current estimate to complete the California bullet train, and the state has not given up on this idea. Actually, this is pretty funny. The powers that be seem to be orchestrating a classic head fake. There is now talk that to control costs, it might be better to stick with diesel locos rather than electric. Are you kidding me? LOL. They say the "transfer" time between buses from the bullet train and the bus time itself to start/end one's journey takes so much time, there's no sense in pushing for max speed through electrification. So many story lines, but I digress and that was not the purpose of this post.

The head fake: I doubt that "electrification" is the long pole in the tent when it comes to costs for the bullet train. It was my understanding that laying the track was 90% of the cost. I don't know; I just pulled that number out of thin air. But whatever the percent, the cost of laying track is the real problem; electrification vs diesel is a red herring. And a head fake.

So, hold that thought.

Coming out of Sacramento, there is now discussion of "sweeping relief" for homeowners and renters.

Links everywhere, but here is one. 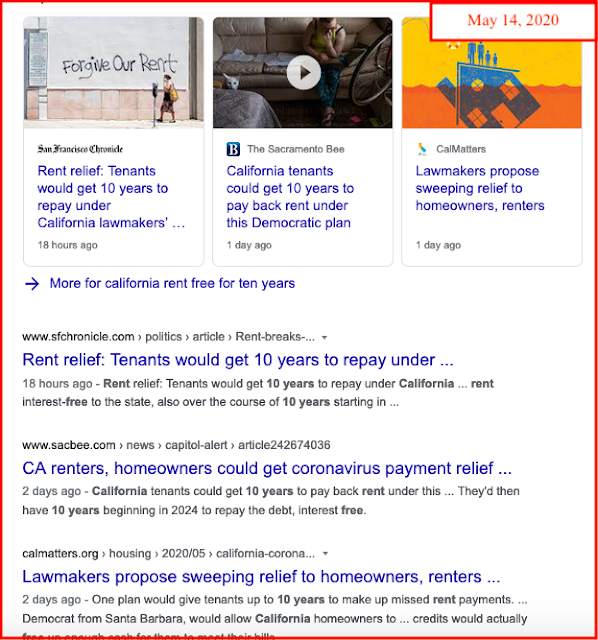 Under one plan: homeowners could delay mortgage payments for a year.

But that was an add-on.

The story that first caught my attention a couple of days ago: tenants -- those folks that pay rent -- would have ten years in which to make up missed payments, starting in 2024, and these make-up payments would be interest free.

My initial reaction was: this is crazy. Absolutely crazy.

But after a bit of thought, this is truly brilliant.

But one needs to put it in perspective: compare the "advertised" cost to the state for rental relieve vs the cost of the Bullet Train.

One also has to add this caveat: the "advertised" cost to the state (taxpayers) will be a whole lot less than what it will likely end up being, but that's another story for another time.

So, to paraphrase Pocahontas, here's the deal:


A plan put forward by Sen. Toni Atkins, Democrat from San Diego and leader of the state Senate, would grant qualifying renters 10 years to repay missed payments directly to the state, which would in turn compensate landlords for the missed rent with tax credits that could be sold to pay mortgages and other bills.... the tax credits would equal the lost rent, and would be transferable.

Apparently this would start in 2024 in California -- I'm not sure why it should not start immediately -- now  is when renters need relief -- and would stay in effect for ten years. Maybe the rent relief starts immediately and the other components kick in in 2024. I don't know.

There is a certain segment of the population that will always be homeless, but the folks I'm worried about -- and the folks this bill apparently targets -- is those folks on the margin, those folks that under "better" times would be able to make their monthly payments. This is for those families whose breadwinner is out of job for ten months and savings have run out.

So, stop right there, it's an incredibly brilliant idea.

But, the cost? Not affordable? Upwards of $500 million per year, or at ten years, or $5 billion. I think the math is correct. A billion a year for ten years would be $10 billion, so at half-a-billion/year, it would be $5 billion over ten years.

Now back to that thought you were holding: ff the state can find $80 billion to fund a short diesel train to nowhere, certainly it can come up with $5 billion over ten years to save a few families who would otherwise go homeless.

The most important thing about this bill: it attempts to address part of the homelessness problem in California. That's enough right there to defend this proposal.

But think of the economic stimulus. A family that cannot afford monthly rent will not become homeless, with additional costs to the state.

They can use the money that would otherwise be spent on rent for transportation, food, education.

US oil supply: another record -- an incredible 42 days of crude oil supply in the US. Link here.

Jobless claims, link here:
Rasmussen daily president poll: at same point in presidency, May 13:
One giant re-set: think about the implications with $20-oil for the next two decades.
Twitter scroll:
IEA:
Saudi Arabia: well, so much for this latest attempt to regain market share
Fascinating: look at these numbers --
IEA's May oil market report has been released (note this is the IEA report, not the EIA report):
Comment: I don't recall any government bureaucracy, in recent memory, using the word "spectacular" to describe anything.


"The current supply losses, OPEC's determination, and trend towards opening up point to stronger oil prices than we believed earlier," it said in a note. "[But] we are not overly bullish as much anxiety persists, particularly around demand and the impact of opening up from lockdowns on the infection rate."

Disneyland? to be closed for one year?

Four wells coming off the confidential list today  -- Thursday, May 14, 2020: 46 for the month; 96 for the quarter, 323 for the year:
RBN Energy: Bakken gas supplies plunge as oil production pulls back. Archived. This is really, really cool. Not only is this an RBN Energy post on the Bakken, but it features one of my all-time favorite poet-writer-singer-Zen master. LOL.
Posted by Bruce Oksol at 7:50 AM No comments: