I almost forgot! The wells coming off the confidential list Thursday:
Interesting to see so many CLR wells, including another Atlanta well, one of 14 wells on one pad southwest of Williston, just northwest of the bridge.

Posted by Bruce Oksol at 10:14 PM No comments: Links to this post

During their time in Boston, the granddaughters collected thousands of shells which they paint. 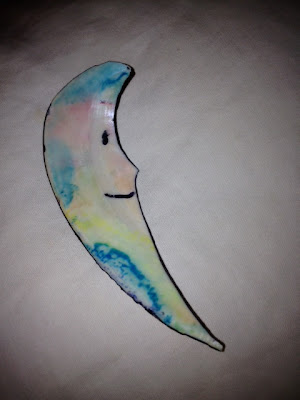 This week is the art show at their elementary school. The younger granddaughter entered this painting which she did when she was in kindergarten: 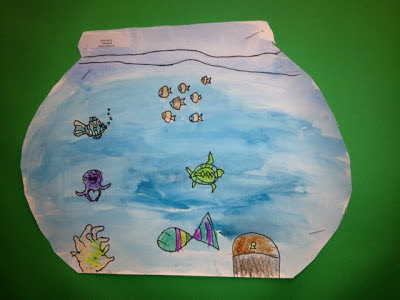 The attention to detail surprises me. The little school of fish; the one fish blowing bubbles; the "baby" octopus and "baby" turtle.

They will be moving to Dallas this summer.
Posted by Bruce Oksol at 8:12 PM No comments: Links to this post

Random Comment On The Canadian Oil Sands: Expect To See Some Announcements This Summer

I'm too exhausted to discuss this, but I want to get the date-time stamp.

The tea leaves tell me that Canadian operators in Alberta will start announcing shutting down of some projects starting later this summer.

This was the article that Don sent me. It is only one tea leaf; there are many, many others.  The Calgary Herald is reporting: any pipeline to the Canadian west coast is a pipe dream.


But, observers say the odds for Northern Gateway and the Trans Mountain expansion moving ahead are still rather slim.

Warren Mabee, a professor at Queen's University, says the Liberals' support for pipelines is highly conditional and doesn't amount to a "green light."

He says, to his knowledge, B.C. Premier Christy Clark's five conditions have not been met by Enbridge Inc., the company planning to build Northern Gateway.

For investors, the moat is very, very big favoring Enbridge, TransCanada, Canadian Pacific, and the Burlington Northern (owned by Warren Buffett). This is not rocket science.

Disclaimer: this is not an investment site. Do not make any investment decisions based on anything you read here or think you read here.
Posted by Bruce Oksol at 7:43 PM No comments: Links to this post

From SeekingAlpha: The Coming Price War Between Crude Oil And Natural Gas

Despite its title, a lot of great information about natural gas. If you haven't read it, highly recommend it.

Some interesting quips from the article:


And not all "unconventional extraction" projects are profitable, even at near-$100 a barrel crude prices. But many are, and some could be, even with under-$30 markets. Skills developed from experience will make many more of those.

Even so, there may still be some Middle East properties with under-$10 costs, so the Saudis and their neighbors are not facing ruin. But the glory days of international oil are winding down.

Here in the US, the role of Natural Gas has been kept minimal because of its irregular availability. NG previously has been produced in association with crude oil. Where NG was a byproduct, "associated" gas that was of small value, hazardous, and had no regular market, was simply "flared.," or burned in the open air.

Encounters of big Natural Gas reservoirs caused "bubbles" of supply, relative to demand (and transportation capacity) that put a chill on NG price - but rarely so on oil or oil product prices.

The initial efforts to use horizontal drilling and hydraulic fracturing were aimed at recovering NatGas, which as it turned out, was found in stupefying quantities, far more than could be handled. Since NG was the objective, much of that found has been shut in, awaiting the construction of take-away capacities that will transport it to market.

The costs of discovery are significant enough that few companies have the financial resources (internal or external) to do a lot of this. The question of the ultimate NG sale price is always a major limiting factor.

But the biggest undeveloped market, already in the early stages of invasion, is in transportation. There CNG and LNG already can present upwards of 50% fuel savings for long-haul truckers and intense city-delivery ops like FedEx and UPS. As well as for non-electric municipal transit systems. It is here that refined oil - gasoline - faces its most serious challenge.

Expansion of that market depends on two things: 1) availability of NG fuels on a wide geographic basis, and 2) vehicles designed for or converted to the use of NG fuel.

Task 1 is being promoted by the company Clean Energy Fuels Corp. and obstructed by the Big Oil club, which knows exactly what its accomplishment is likely to do to profits.
Task 2 at the consumer level only has one NG-fuel-designed vehicle (by Honda  and now serious, developed engines designed by a subsidiary of Cummins for truck and large vehicle usage. Conversion kits to adapt existing internal combustion engines of passenger vehicles, in widespread use elsewhere in the world, are prohibited by law here in the US. (Guess why?)

Posted by Bruce Oksol at 7:29 PM No comments: Links to this post

A reader reminded me I had not posted Continental Resources' press release for its 1Q13 operations and earnings.

I get overwhelmed during earnings seasons and miss some reports, even the big ones. And this one is huge.

Hopefully I will come back to this press release and dissect it. There is a lot of information in this release.

In addition, here is the earnings call transcript.
Posted by Bruce Oksol at 7:22 PM No comments: Links to this post

Disclaimer: I am exhausted so there may be more errors than usual in all postings done today. That will be true through the weekend.

Active rigs: 194 (significant increase over the past few days)

Eleven (11) new permits --
Wells coming off the confidential list were posted earlier; all three went to DRL status.
Posted by Bruce Oksol at 6:58 PM No comments: Links to this post

New production numbers are preliminary and subject to revision.

The Bismarck Tribune also reports the story. I sometimes find it amazing what gets buried in these stories. The lede:  "ho-hum" report. That may be: daily oil production did not increase much in March. But the headline should have been this: there are currently five (5) natural gas gathering and processing plants under construction in North Dakota.

I don't know now many natural gas plants are in North Dakota, but it was a big deal when ONEOK came in, during the Bakken boom, and built the first five. In my mind, another five being constructed is a big, big deal. Hopefully we will more about them. North Dakota currently has the capacity to process about 1 billion cubic feet of natural gas; Helms says that should eventually peak out at 1.5 billion cubic feet.

For comparison purposes, the NDIC estimated that at the end of January there were about 375 wells waiting on completion.

One can find the Director's Cut at the NDIC home page.

With regard to flaring:

Kringstad declined to name a specific timeframe as to when the percentage of flared natural gas is expected to drop or to what percentage it may decline to.

Posted by Bruce Oksol at 6:53 PM No comments: Links to this post

I linked this article earlier but didn't have time to look at it. I'm taking a break for a few minutes and have just looked at this MailOnLine article. I hope this article is never archived; it's incredible. The photos are incredible. The comments are as good as the article. As some have noted: if global warming doesn't kick in soon, the Brits are going to start freezing.
Posted by Bruce Oksol at 1:19 PM No comments: Links to this post

The number of active rigs are tracked here.

The rise in number of active drilling rigs over the past few days is not trivial. This is quite remarkable. The Bakken boom record was  218. The post-boom low was 179. For the past several months, the number has fluctuated around 185.
Posted by Bruce Oksol at 1:13 PM No comments: Links to this post

Down to 179 not too many weeks ago, fluctuating around  185 for the past several weeks: now, all of a sudden the number of active rigs has jumped to 193.

I think of the comments recently made by the CEO of Crescent Point Energy.
Posted by Bruce Oksol at 9:19 AM 2 comments: Links to this post

Wells coming off confidential list have been posted. Scroll down a few posts, but hardly worth it. All three wells were placed on DRL status. No production data.

RBN Energy: this is a nice update of EPD's expansion plans at the ECHO terminal near Houston.

Section B (Marketplace):
Section A:


"Supply growth is even steeper than previously expected and at the same time the opposite is true of OPEC production-capacity growth, which now looks to be stalled in some areas," said Maria van der Hoeven, executive director at the IEA.

The latest forecast marks a shift in the IEA's thinking, which previously saw supply growth split fairly evenly between OPEC and non-OPEC countries in the medium term. The fast U.S. supply growth has diminished U.S. demand for oil from OPEC members like Nigeria, and in the long term, growing U.S. exports of oil and natural gas could further weaken OPEC, says Amy Myers Jaffe, who studies energy and the oil industry at the University of California at Davis. She didn't know the contents of the IEA report.

Op-Ed: Bring on the 'Helicopter Money':  Quantitative easing has not been much of a success. Perhaps the Fed can try a more overt monetary policy.


There is another possible solution. A decade ago in a widely noted speech, Ben Bernanke, then a Federal Reserve governor, encouraged Japan to finance tax cuts with money printed by the central bank and credited directly to the budgetary arm of the government without issuing any more interest-bearing debt. This idea was first proposed by Milton Friedman in 1948, who likened it to a "helicopter drop" of money for combating deflation. Today "helicopter money" is more politely called "overt monetary finance."

The Fed has already printed about $2.5 trillion of new money. Overt monetary finance might offer a more direct way to channel that money into the economy than trying to push debt through banks to the private sector. Such an approach would bypass the credit channel and send cash straight to the Treasury, where it would be deployed as directed by Congress.

Posted by Bruce Oksol at 6:33 AM No comments: Links to this post