... and closes the entire northern half of the state: 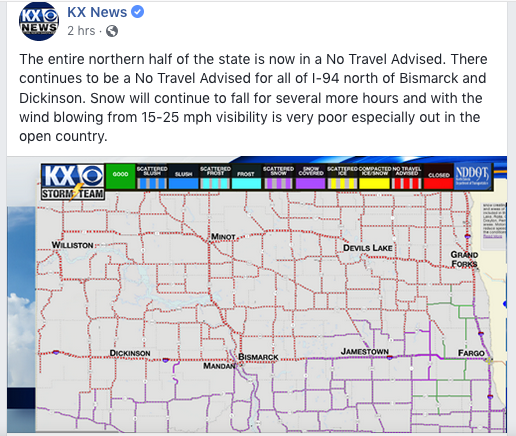 Posted by Bruce Oksol at 7:34 PM No comments:

The Way We Were: the movie I love. The movie I cannot watch. 1973. Robert Redford. Barbra Streisand. Was it not the best? And it's playing on TCM right now. Opposite the PGA tournament, TPC Scottsdale. Lead-in to the Super Bowl. What's not to like. Even though I can't watch that movie any more, it's on on my "top shelf" list. It's of the same "mold" as Dr Zhivago and Lawrence of Arabia. Favorite movies, top ten movies, that I cannot watch many of them any more. I'm not sure "why" I can still watch Casablanca and Tinker, Tailor, Soldier, Spy.

Fantastic Voyage: on TCM last night. I had never seen the movie before. If I have, I've forgotten. Released in 1966. Probably got to Williston, ND, in 1969. LOL. Raquel Welch? Yawn. I recognized Donald Pleasence but couldn't place him. Finally, I did. Columbo: Any Old Sport in a Storm. Coincidence. Also came out in 1973.

Marie Kondō: the family has a graphic novel -- along the lines of The Life-Changing Magic of Tidying Up: The Japanese Art of Decluttering and Organizing,  Marie Kondō, c. 2014. I read some of it the other day while waiting to take Sophia to school. She calls it school, but in fact its pre-pre-K. And she loves it. But I digress. I learned enough in a few pages, to throw out two boxes of clothes/odd-and-ends in storage and I completely emptied one drawer in my four-drawer chest of drawers. I have only one chest of drawers so I decluttered 25%. 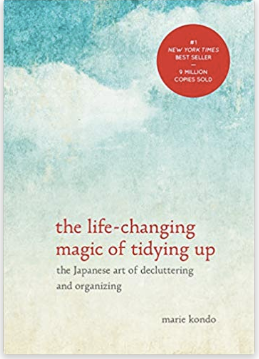 Amazon. Lives up to its name. From wiki:


In 1998, Jeff Bezos, founder, owner, and CEO of Amazon.com, struck a deal with Needham and other principal shareholders to buy IMDb outright for approximately $55 million[9] and attach it to Amazon as a subsidiary, private company.[10] This gave IMDb the ability to pay the shareholders salaries for their work, while Amazon.com would be able to use IMDb as an advertising resource for selling DVDs and videotapes.

AMZN: wow, I wish Jeff Bezos/Amazon would do what Warren Buffett/Berkshire Hathaway did with BBK: A and B shares. AMZN, less than $350/share less than five years ago is now over $1,600/share. 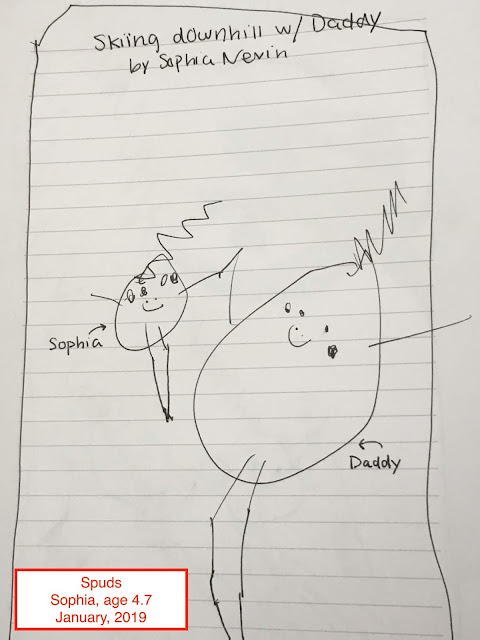 Sophia drew this in January, 2019. This was the first year she was ever on skis. She took two days of lessons at Angel Fire, and then skied with her dad and her two older sisters.

Months later she still knows how to ski ("french fries") and how to stop ("pizza").

The other day on her bicycle, when I was teaching her to brake, I asked her how she "braked" when she skied? Her answer: "pizza."
Posted by Bruce Oksol at 7:26 PM No comments:

February 9, 2019: profit margins on EVs incredibly small; if it weren't for government mandates, auto manufacturers would not be making them.

Over at oilprice: Are automakers overestimating EV demand?


Electric cars were the stars of the Detroit Auto Show this year and they have been garnering a lot of attention from the media generally amid increasingly urgent talk about climate change and how the world is failing in the fight against it. Every self-respecting automaker has at least one EV in the pipeline. The biggest ones have several. And all of these new EVs are scheduled to hit the market in the next few years. A pileup may be coming.

The pileup could be “of epic proportions” as AlixPartners warned in a study.

By the end of this year alone analysts expect almost a dozen new EVs to make their appearance in showrooms across the United States. Some of these will be direct competitors of Tesla, which currently boasts an impressive 83 percent of the U.S. battery electric car market.

The “threat for Tesla” angle in EV reporting is a popular one and indeed a 83-percent market share is an unsustainable one in any industry. But with Tesla’s brand loyalty, concerns about the company’s future sales may be premature. What is not premature is a worry about that pileup AlixPartners warned about.

The world’s biggest carmakers are pouring billions into electric vehicles motivated by government incentives and strategies envisaging the phasing out of ICE vehicles in some markets. From the pro-EV perspective, the time is just right to launch as many electric cars as one can design and manufacture. All the big carmakers have developed EV manufacturing platforms and are preparing to put them to good use. Millions of EVs are coming to the market. There is just one problem with that: actual sales statistics.

The other side of the coin: if you have a home, a 220-volt outlet in the garage, at least two other ICE vehicles, and are in the market for a new (additional) car this may be the year to consider an EV. Prices could plummet if millions of EVs come to the market, and American only "need" hundreds of thousands.

Worldwide: 2 million.
Posted by Bruce Oksol at 5:06 PM No comments:

I've been updating the Epping oil field wells but I still have a lot of work to do on this field.

This is an interesting field. It seemed to have started out "slow" but it's becoming an incredible field.

For example: look at these incredible Kraken wells.

I've mentioned this before on the blog: it's my hunch that operators often under-promise what a field might offer. Call it the "Disneyland effect." The operators have to thread the needle. They need to "talk up" their assets to generate investor interest, but they are watched closely by the SEC. On the other hand, they don't want to get too far in front of their headlights and drive up lease rates and acquisition costs.

But if one remembers, one of the first CBR terminals in the Bakken was in the Epping oil field. That should have been a big hint.

Even more interesting for me: during the Bakken boom I drove my dad out to Epping numerous times; the field never seemed particularly active. My hunch is that the field is very, very active right now.

It reminds me a little bit of Bailey oil field, although Bailey at 160+ sections is much, much bigger than the 30+ section Epping oil field.

So, give me a few days, and I will get the Epping oil field completed.
Posted by Bruce Oksol at 4:16 PM No comments:

June 18, 2019: the group of wells in the original post that were taken off line are now all back on line with the exception of a couple or so:

Interesting, interesting things going on with MRO in the Bailey oil field.

For newbies:
Look at this. In Bailey oil field, these great wells are now off-line (when I say "now," remember: the paperwork lags what is going on in the field; the most recent data over at the NDIC is from 12/18):
In the ten years blogging about the Bakken, I have never seen this before. I'm sure it's happened before and perhaps it happened earlier in the Bailey but for me it's a new phenomenon.
Posted by Bruce Oksol at 3:20 PM No comments:

Another Example Of What The SeekingAlpha Crowd Is Missing -- Not Just In The Bakken But Everywhere -- February 3, 2019

Comments that came in later, for newbies:

Original Post
Well, this is interesting. The Bakken never quits surprising me.

Now we have another nice MRO in that very same drilling unit that has come off-line: 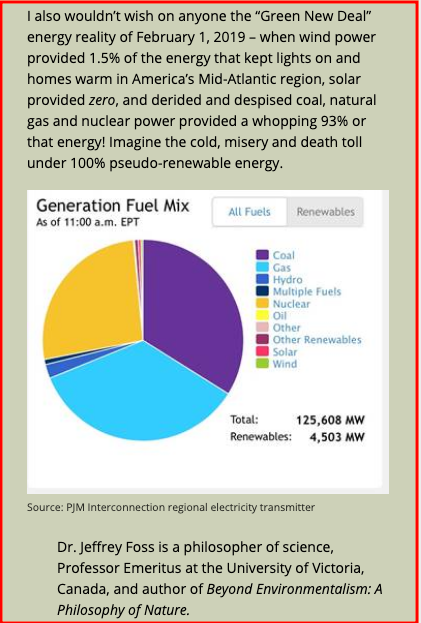 NOTE: the graphic is from PJM.

For the millennials who may not be able to read a pie graph (or even know what a pie graph is):
When you see these graphics and have just lived through the polar vortex, a sentient being (perhaps even Scott Adams) needs to ask "why" is anyone in their right mind promoting wind and solar energy? Even if it's all about CO2/global warming (and, of course, it isn't), putting up a few wind farms in the US will make no difference when the Indians and Chinese are going to be burning more fossil fuel (natural gas and coal) than ever before in the out years. Thank goodness India and China are on the other side of the earth; it will take longer for that atmospheric CO2 to reach America.

Transferring $100 billion from OECD to a couple of islands in the South Pacific, administered by a committee in South Korea, tells me:
1,500 private jets carrying 1,500 non-scientist billionaires also speaks volumes. If they aren't concerned about CO2 emissions, why should the rest of us be concerned? Couldn't they have at least jet-pooled and/or car-pooled?

Fact check:
What was it that P. T. Barnum was said to have said?
Whenever our granddaughters have a question they cannot answer, I tell them to a) google it; or, b) follow the money.

Google, in this case, is unhelpful. Google searches on AGW will simply take you to religious arguments: one either "believes" in AGW or one doesn't "believe" in AGW. When it comes to AGW, I am not agnostic. I am an atheist.

In this case, it's all about "following the money."

As one example this story is all over the AGW blogosphere, but won't be reported in the mainstream media. Just as the mainstream sports media won't report on how the PGA ruled on Justin Thomas' infraction yesterday (but that's another story).

This is not some low-level worker-bee. This is the head of the UK global warming climate scheme/scam: 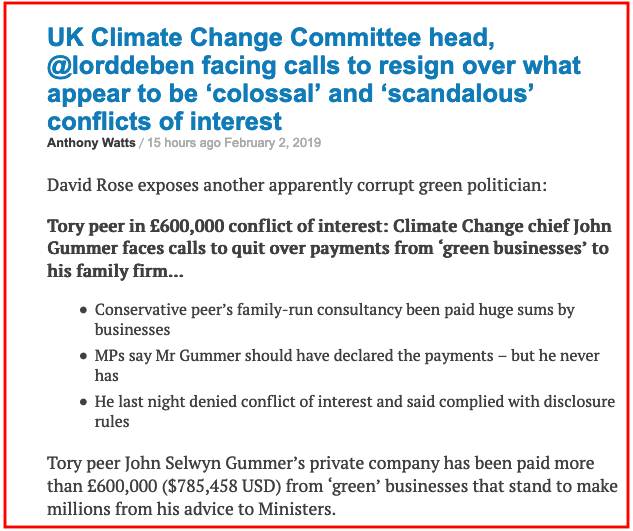 How much has Algore made on this scam?

See comments below to explain why this screenshot is posted here: 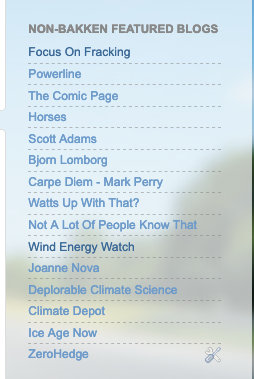 Random look at two Equinor wells in Painted Woods, a Tier 2 location. These wells have not been re-fracked but they seem to show a bit of renewed life since the original frack:
Comments:
Selected production data. Without a re-frack I would have expected both these wells to be down to less than 1,000 bbls/month: 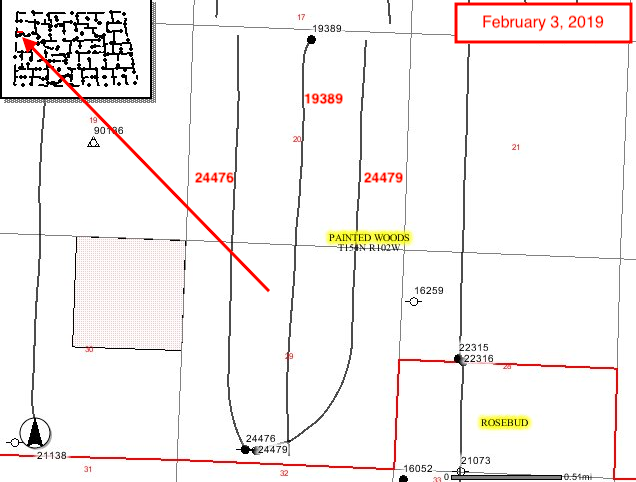 What about that even older well in the graphic?


By the way, from the most recent sundry form dated October 4, 2018, another example of the "good neighbor" policy:


"Land owner (Brad Olson) is having issues with the site drainage at the M Olson which is causing some erosion problems in his field. Equinor Energy LP is relocating the site drain as shown in the attached image at his request. With the weather situation, Equinor has planned to do this work today (10/4/18). " 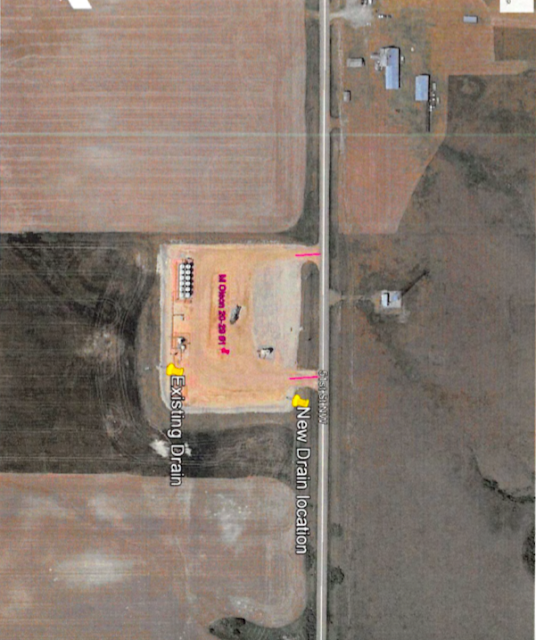 The last work-over of this well appears to have been in early March, 2012.

A Random Look At Some Of The Wells Coming Off The Confidential List This Next Week -- February 3, 2019

These are a few of the wells of interest coming off the confidential list next week.