Update On The Toyota Announcement About Leaving California

May 10, 2014: two interesting items that don't have anything to do with the original post except that they both relate to Toyota. First, do you all remember this back in 2012: Toyota bails on the all-electric vehicle, saying it had misread the consumer. And then this item today: car sales are doing so well in the US, Subaru needs all the US factory capacity it can find. Therefore, it has asked Toyota leave its Indiana plant. Toyota will move Camry production from Indiana to Kentucky.

From the blog earlier today:

The city's biggest employer and a prime benefactor had given a half-million dollars toward the project. This week, Mr. Scotto has had a less pleasant duty to perform: Figuring out how Torrance can fill the 101-acre hole the giant auto maker will leave behind when it vacates its sprawling campus and moves 3,000 jobs to a new North American headquarters in Texas.

Toyota's decision to consolidate much of its U.S. operations in Plano, Texas, by 2017, officially announced Monday, caught Mr. Scotto by surprise. Toyota's own employees in Torrance were informed just minutes after the mayor got a courtesy call. State of California officials, too, had been in the dark about the move, which Toyota had been exploring for the past year.


An interesting and revealing market-based measure of the relative attractiveness (and migration patterns) of the two states is to compare the cost of a one-way U-Haul truck going from California to Texas vs. the cost going in the other direction. To rent a 26-foot truck one-way, here are the current prices being quoted by U-Haul for June 18:

Bottom Line: The cost of a one-way U-Haul truck leaving California for Texas is more than twice the cost to rent that same truck going from Texas to California, suggesting that there are twice as many trucks and people leaving California for Texas than vice-versa. Based on the huge difference in demand for one-way truck rentals, there is a premium of more than 100% for Californians to rent trucks going to Texas, and large discounts for trucks going in the opposite direction to California. U-Haul’s market-based pricing seems to confirm the California exodus to Texas of jobs, people and businesses like Toyota and Occidental.

For background to this new story, start here, which was posted just a few months ago, back in December, 2014. At that time I wrote:


This is sort of like, according to our sources, ONEOK will soon announce another investment of $2 - $3 billion in the Bakken.

Here's a start. I think this story refers to the seventh (7th) ONEOK facility announced November 19, 2013.

Posted by Bruce Oksol at 9:31 PM No comments:


In The Summertime, Mungo Jerry
Posted by Bruce Oksol at 5:18 PM No comments:

A couple days ago, I wrote:

A reader refers me to this PDF: http://www.willistonnd.com/usrimages/hammmonument.pdf:


In March 2004, Continental Resources’ Robert Heuer 1-17R in Divide County was the first commercially successful well in the North Dakota Bakken to be both horizontally drilled and fracture stimulated. “After many failed attempts, this one proved that a Bakken well could be a commercial success,” says Harold Hamm.

Posted by Bruce Oksol at 4:40 PM No comments:

For Investors Only; Was KOG A Miss? That's Quite A Beat By COP And XOM; CVX Increases Dividend

Companies reporting earnings Thursday:
Comment: KOG could be a disappointment.

The problem is making sure we are measuring the same thing. According to Yahoo!Finance, the expectations for KOG were 18 cents/share net income. According to the press release, 11 cents/share net income. But sometimes there are one-time items that affect the comparison. [Yes, SeekingAlpha says KOG missed by 7 cents. KOG is down over 7% in after-hour trading, down almost a buck to $11.55.]

Kodiak reported net cash provided by operating activities during the first quarter 2014 of $163.5 million, as compared to $114.6 million during the same period in 2013, an increase of 43%.

Despite a pretty flat day on the market, and a further drop in the price of oil, the following companies traded at a new 52-week high: ENB, MPC, NFX, OKE, WIN, WMB. It's been a long time since I've seen ENB trade at a new 52-week high. Let's see if there are any headlines to explain this?

I did not listen to the April NDIC hearings, so I appreciated this note from a reader who did:

Oasis request for proper spacing units and redefining of field limits for the Black Slough Field. The audio of the hearing, however, made mention of an exhibit which illustrated a potential 10-well development plan for units of the Black Slough-Bakken Pool that included three wells in each of the first and 2nd TF benches and the MB.

The lower TF benches were not included, at this time. It should be noted that NDIC Orders in this matter are pending and, even if approved, development probably wouldn't begin until sometime in 2015.

One might add, "if at all," because many of the spacing units are yet to be secured by an initial well.

For me, the biggest take-away from the hearing, in this case, was testimony that differentiated the benches of the Three Forks so far from the core areas to the west and southwest, where pilots are testing commercial productivity levels for at least three (3) Three Forks benches and trying to get the read on optimum well densities, including both vertical and horizontal spacing.

It may be old hat to everybody else, but this is the strongest confirmation I have come across that the benches of the Three Forks are discernible and being differentiated for drilling and development purposes that far from the deepest areas of the Bakken and half way into Burke County, from south to north, as well as diagonally. 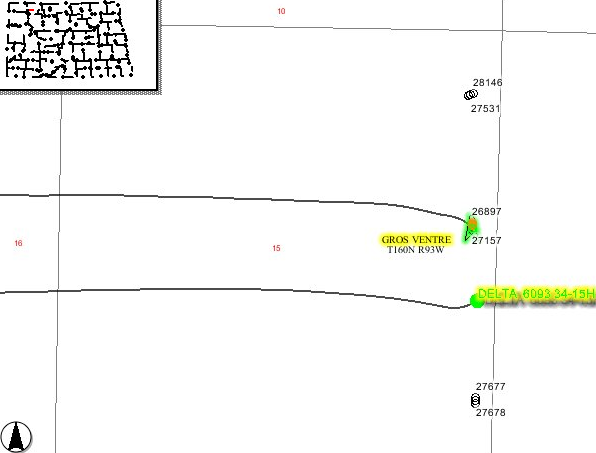 The Delta 6093 34-15 H is on a single well pad. To the north are two multiple-well pads (one with a rig on site; one pad with 3 wells; one pad with 4 wells) and to the south, another three-well pad: a total of 11 wells in this section / drilling unit.

These are the wells:
There are several story lines here but I will let folks study these for awhile; see if folks see what I'm seeing.
Posted by Bruce Oksol at 2:46 PM No comments:

Email ThisBlogThis!Share to TwitterShare to FacebookShare to Pinterest
Labels: Well_Density

Random Note On Two Wells In The Catwalk

Per a reader's request.

This is a screenshot of two neighboring wells in the Catwalk: 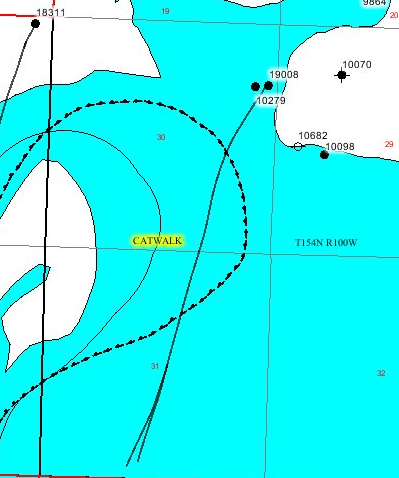 This is an old Statoil Bakken well just a few feet east of the Madison well below:

This is an old Madison well:

In fact, the report was worse than folks would lead you to believe. Analysts forecast that first time claims would drop to 315,000. Not only did they not decrease, first-time claims surged.

Wow, the spin continues. The AP is reporting:


The number of Americans applying for unemployment benefits rose last week to the highest level since February, a dose of mixed news for an economy that appears to be gaining momentum.

The Labor Department said Thursday that a seasonally adjusted 344,000 people applied for benefits, up 14,000 from the previous week and the most since late February.

The less-volatile four-week average rose by 3,000 to 320,000, a figure that's still consistent with a steadily improving job market. The number of people applying for benefits has risen three straight weeks, but Ian Shepherdson, chief economist at Pantheon Macroeconomics, said last week's numbers might have been warped by the Easter holiday.

"We think the underlying trend (in applications) is falling, but only slowly," Shepherdson wrote in a research note.

Deeper in the article:


Another Labor Department report shows that layoffs are running nearly 40 percent below their peak in 2009. Though they've stopped cutting jobs, employers have been slower to add new ones: Hiring remains well below pre-recession levels.

Six years into the recovery?

Trivia: the AP report did not mention that analysts forecast a fall to 315,000.
Posted by Bruce Oksol at 9:49 AM 2 comments:

For newbies: be sure to scroll down through several posts -- wells coming off the confidential list for the last couple of days have all been updated.

This is a big day for earnings reports; those reporting before the market opened, have been posted. The general trend: a huge quarter for oil and gas despite a tough winter.

As of April 30, 2014, the state of North Dakota issued 917 oil and gas permits. This does not include permits for salt water disposal wells. It does include at least one permit for a well that will be used strictly for monitoring and will not expected to be a producer. With 917 permits, the state is on track to issue 2,789 permits this calendar year. I assume approximately 50 of these new permits will be canceled at some point in the future.


Yesterday (April 30, 2014) the Energy Information Administration (EIA) reported yet another increase in Gulf Coast inventories as of April 25 - adding 5.7 MMBbl to set a new record of over 215 MMBbl of crude. Stocks in the region are now 27 MMBbl above the 5-year average and even if refiners cranked up output to the highest levels ever (96.5 percent utilization) the surplus would take at least 3 months to get back to “normal”. Crude prices are being impacted as the premium of Light Louisiana Sweet (LLS) crude at the Gulf Coast over West Texas Intermediate (WTI) delivered to Cushing, OK has narrowed close to $2/Bbl. With no crude exports allowed to ease the surplus it looks like Gulf Coast prices will remain under pressure. Today we look at prospects of reducing the crude surplus.

Five weeks ago, Torrance, CA, Mayor Frank Scotto was celebrating the opening of the city's new athletic fields with officials of Toyota Motor Corp. The city's biggest employer and a prime benefactor had given a half-million dollars toward the project. This week, Mr. Scotto has had a less pleasant duty to perform: Figuring out how Torrance can fill the 101-acre hole the giant auto maker will leave behind when it vacates its sprawling campus and moves 3,000 jobs to a new North American headquarters in Texas. Toyota's decision to consolidate much of its U.S. operations in Plano, Texas, by 2017, officially announced Monday, caught Mr. Scotto by surprise. Toyota's own employees in Torrance were informed just minutes after the mayor got a courtesy call. State of California officials, too, had been in the dark about the move, which Toyota had been exploring for the past year.

GOP says one-third of ObamaCare enrollees did not pay first-month premium. Comment: and by the fifth month the number will continue to increase -- the number who do not pay.

Crude oil CBR derailment in Lynchburg, VA. -- previously posted. First reports: no injuries, no deaths. Compare with deaths of four people in aircraft mishap -- private plane flies into wind turbine in South Dakota. Did that story get reported in the national press?
Posted by Bruce Oksol at 7:47 AM No comments: