From The Bismarck Tribune, data points:
Just in time for the 2018 mid-term elections making it easier for Trump to fly in to support his candidates.
Posted by Bruce Oksol at 11:03 PM No comments:

Oasis To Report Some Incredible Lawlar Wells; The Matthew Schmidt Wells Have Been Updated -- September 23, 2017; CLR With Another High-Intensity Frack

Item 1: The Matthew Schmidt wells have been updated. Important wells for understanding the Bakken.

Item 3: Meanwhile, is CLR getting ready to frack the Rath Federal wells (or have they already been fracked)? Note that Rath Federal, #31670, has been off-line for several months: 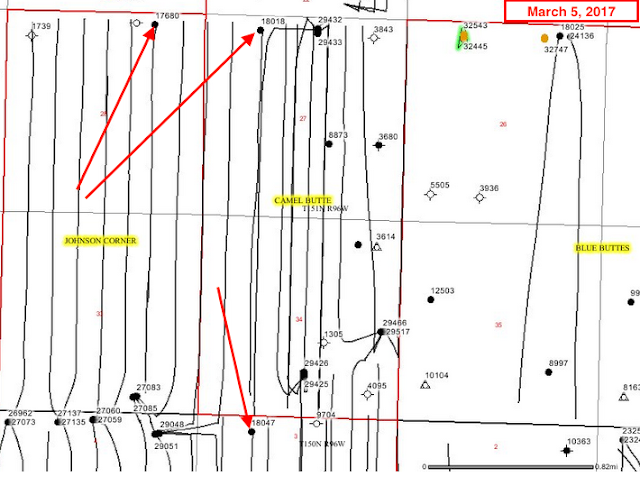 Look at the "unusual" location of the horizontal for #29434, brought all the way over to line up exactly against #18018: 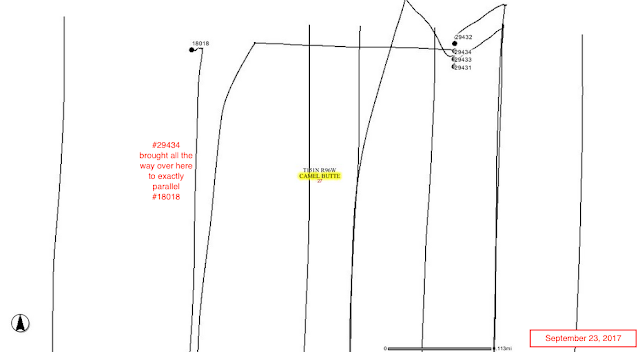 In other words, #18018 was producing about 1,000 bbls/month. It was taken off line for less than six months and when it came back on line it produced almost 20,000 bbls/month or 20 months of production in one month. And that was sustained for two months and then declined quickly.

When it costs upwards of $10 million to drill/complete a well, I don't think locations of horizontals are random or coincidental.
Posted by Bruce Oksol at 4:47 PM No comments:

Just some housekeeping. The original page is simply getting too long. Time for page 2.

This page is part of the "Big Stories" page linked at the sidebar at the right. "The Doomsday Chronicles" track a number of sectors, including mainstream media.


The cuts at the teetering tabloid, which some insiders feared would range as high as 70 percent of staff, are expected to be among the largest in the paper’s 99-year history — and could include editor-in-chief Jim Rich.

When women credibly accused Clinton of rape, groping, and harassment, our media joined the White House in destroying them as liars. But this same media hoping to turn a 12-year-old consensual relationship into a national scandal.

December 9, 2017: The owner of the Boston Herald newspaper has filed for chapter 11 bankruptcy and is putting itself up for sale, with a $5 million starting offer from GateHouse Media.
The feisty, conservative tabloid, which dates back to 1846, cited the growth of alternative media sources and erosion of advertising revenue in print media for the need to seek bankruptcy protection.

September 29, 2017: WSJ to end print editions of the European and the Asian WSJ.

September 23, 2017: the demise of the glossy magazine -- The New York Times.  The link sent to me by a reader; I saw the headline but forgot to post the story. Highlighted: Rolling Stone, Vanity Fair. Not mentioned: such magazines as O (Oprah).
Posted by Bruce Oksol at 3:10 PM 2 comments:

Later, 6:56 p.m. Central Time: the tea leaves suggest we could see widespread "kneeling" in the NFL tomorrow. The announcers do what they can to avoid commenting on political issues and producers always cut away from controversial video. It will be interesting to see how things play out Sunday, tomorrow, September 23, 2017.


Original Post
I haven't really kept track but generally, it seems, President Trump gets about 30,000 to 50,000 "likes" on any given Tweet.

I assume he has had more than 100,000 likes on some tweets, but I don't recall any recently. I will watch. What got me thinking about that was this latest tweet:

It will be interesting to see if President Trump re-tweets this one:

As long as I'm posting these, I might as well clean off my desk-top. One more, although I was saving it for Halloween: 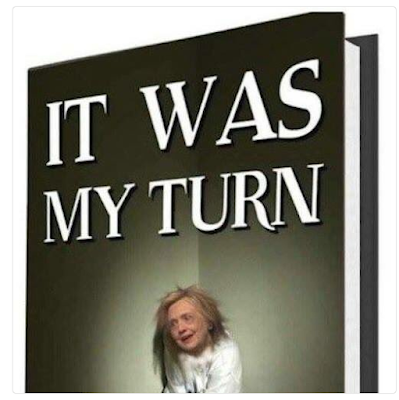 
Wow, talk about a blind spot. In Fortune, Hillary Clinton is quoted as saying that she does not understand how women can support Trump.

Hillary Clinton spoke about her thoughts on what she viewed as sexist comments by President Donald Trump and women who continued to support him.

"When I see women doing that, I think why are they publicly disrespecting themselves? Why are they opening the door to have someone say that about them in their workplace?

In a community setting? Do they not see the connection there?" Clinton said in an interview on AM Joy.

Hillary has the audacity to say this even after her husband is overwhelmingly supported by US women voters despite his history.

Stand By Your Man, Tammy Wynette

Link, data points:
I haven't seen a Time magazine in a long time but the last time I looked, a very, very thin publication and selling for about $6.
Posted by Bruce Oksol at 11:49 AM No comments:

Longest running reality show/soap opera continues. These summer re-runs are getting a bit boring. No real need to post / link the most recent update. I will simply copy/paste what I wrote September 19, 2017.

Look at New Mexico -- health care insurance premiums will increase 40%; deductibles and co-pays will pretty much minimize any liabilities for the insurance companies. Increasing their premiums 40% and minimizing any chance they will actually have to pay for anything ... what's not to like?

Infrastructure. The multi-year infrastructure program in Texas and Florida is now underway and soon to begin in Puerto Rico. For investors, building supply stores; lumber companies; and, railroads are going to do very, very well. Mexico City? Not quite ready to re-build -- another 6.1 earthquake hit the metropolis earlier today.

EVs: this may be the biggest non-energy story of the week. Daimler announced it will invest $1 billion for an EV and battery plant in Alabama. This is a big, big deal on so many levels, and so many story lines.

H-bomb over the Pacific: one wonders if that will finally get the attention of Japan, South Korea, and China.

Peak oil. The oil glut actually worsens despite all the headlines suggesting otherwise. US crude oil inventories are now out to almost 32 days, well past the "historical norm" of 18 - 20 days and the time to re-balance is now back up to 46 weeks after a third consecutive week of rising US crude oil inventories. Interestingly enough, WTI has clawed its way back to $50 and "speculators" are trying to get to $51. LOL.

Natural gas. US is well on its way to surpassing Qatar in annual LNG exports.

Enough of that; the above notes were posted for background for the archives to remind me of what was  going on this past week, while back in the Bakken ...

Operations:
The Bakken is among the top five oil and gas plays for IRRs
The Bakken is among the top four oil and gas plays for best break-even prices (Citi)
In-depth look at NP Resources' plan for a 6-well pad
QEP  has permits for another 7-well pad in the Grail
A short Bakken lateral, less than ten years old, goes over 1 million bbls crude oil produced
Some incredible stats for CLR in Elm Creek oil field
Monthly production statistics for North Dakota
The US SPR is now the Bakken and the Permian
Oasis to sell non-core assets in Montana and North Dakota

Fracking:
Can you say "high-intensity"? CLR with a 56-stage, 26-million lb frack
Federal oversight back in the news; much ado about nothing -- if Trump  has anything to say about it

Miscellaneous:
Clean-up begins near Tioga of one of nation's largest onshore oil spills

Bakken economy:
Update on the proposed truck route around the northeast side of Williston
Taiwan signs huge ND wheat deal
Posted by Bruce Oksol at 11:31 AM No comments: