Background: it's hard to believe but back as early as September, 2010, I noted that among the big-name operators in the Bakken, OXY USA seemed to have a special knack for reporting very poor wells in very good areas of the Bakken. I thought it might be a one-off for awhile, but I kept seeing the same thing over and over so I started tracking OXY USA wells in the Bakken. I think I posted every OXY USA well that came off the confidential list from that September, 2010, until June 9, 2015, and the trend of poor wells seemed to continue.

There were exceptions, and over time, poor wells seemed to have better production for unknown reasons.

In October, 2015, it was announced that OXY USA sold 300,000 Bakken acres for $500 million to Lime Rock Resources; selling 346 wells, which appeared to be the biggest transfer of wells up to that time in the Bakken. For newbies: OXY USA was focused in the southwest part of the Bakken, down near the Belfield area, where Whiting was also focused at the time (it's "southern play in the Bakken").

Today, December 21, 2016, a reader wrote to tell me that one of these Lime Rock Resources/OXY USA wells is now producing, but still on the SI/NC list. The reader tells me that he is very, very happy with the early results of this well and very pleased with Lime Rock Resources.
I believe there are four Matthew Schmidt wells. If so, I will start tracking the Matthew Schmidt wells here. 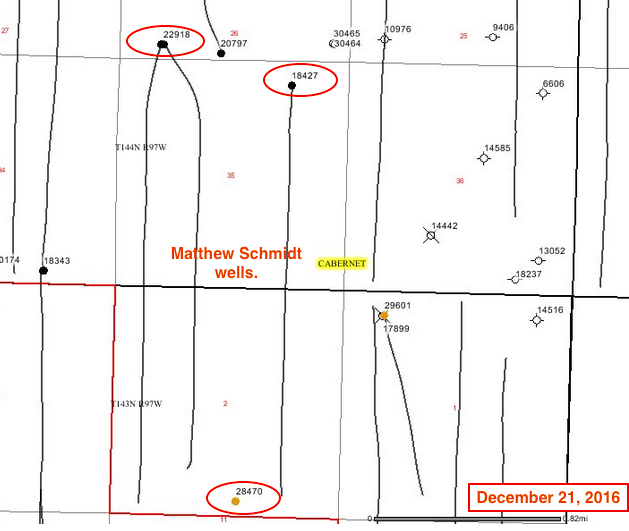 Production data released prior to confidential status that is still available:

Well completion report received by NDIC on April 6, 2015, but not fracked at that time.

Operator at that time: OXY USA.