A Reader Has A Question Regarding "Confidential Status" -- October 3, 2015

Over at the discussion group a reader has this question about confidentiality:

I have an interest in four wells that are on Confidential Status.  I've noticed that some wells on this status will have spud dates, but none of our four do.  Why would they be on confidential if the drilling hasn't started?  Reference permit #31341.

I believe this is the timing regarding "confidentiality":

I will let others answer this one. As much as I've written about "confidentiality" I still don't understand some of the nuances and subtleties. Anything I would suggest would simply be opinion, an that along with $2.10 would get you a cup of Starbucks coffee.
Posted by Bruce Oksol at 10:20 PM No comments:

Two readers have written to say that NDIC data has not been updated; seems to be delayed; reasons not given.

It's a long, long story that I've posted once before so I won't go through it again. Suffice it to say my wife is a religious recycler. I think the whole recycling "thing" is crazy. Last time I wrote that, I was lightly chastised and I backed off a bit.

Tonight, a reader sends me the definitive article on recycling, from no less an authority than the New York Times.  Great article.

It's also the longest article on recycling that I have ever seen.

Regardless of what the New York Times says, however, I will do whatever my wife tells me to do.

I'm too exhausted to write a long note. Suffice it to say we had a great evening tonight enjoying Grapevine Art Dealers Association Fall Gallery Night. My wife and I are taking care of our 15-month-old for the next four days (older granddaughters and their parents are in Florida, learning to sail). 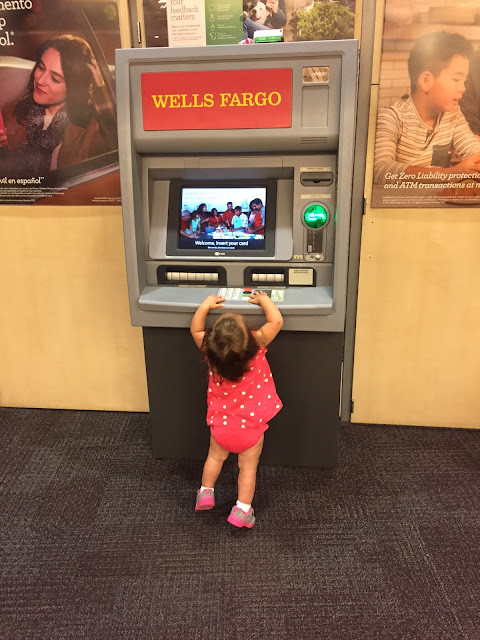 October 8, 2015: SC Times applauds Xcel's recent announcement to shut down two coal-burning plants but asks the question, "what's the cost?" LOL. These idiots never talk about the number of coal-burning plants China is building every week. But back to the question, "at what cost." We'll know in a few years. Electricity is so cheap in this country, Americans are willing to pay double just to feel good. Some data points from the article. From wiki: On October 2, 2015, Xcel Energy filed plans with the Minnesota Public Utilities Commission to shut down the plant's Unit 2 in 2023 and Unit 1 in 2026, each with a capacity of 750 MW (Sherco has three units).

Perhaps this article is not worth posting. I don't know. But it's clear that I need to add a tag, "The Road To Minnesota." Oh, I see I already have that tag; completely forgot.

Someday, probably in the year 2020, we will see this headline on the op-ed page of the StarTribune: What Were They Thinking?

Anyway, today (October 3, 2015, 12:39 a.m.) the StarTribune is reporting that Xcel Energy plans more wind, solar power and less coal -- and sooner -- in Minnesota. [Actually, Xcel wants more wind, more natural gas, and less coal in North Dakota -- so the headline is wrong on almost all accounts. I guess Xcel will keep solar in the sunny state of Minnesota.]

Oh, that's right. This is why I wanted to post the story.

Earlier I commented on President Obama's Clean Power Act and how it might affect North Dakota in these two posts:
I must have been in a good mood based on the lengths of those two posts. But I digress.

I can't remember if I actually posted this, sent it in an e-mail to someone, or just thought it, but when it comes to the Clean Power Act and the new restrictions, this is an opportunity for North Dakota to really move to a new level in the energy sector.

And there it was, in the linked StarTribune article again.


Although Xcel already intended to double its investments in wind and solar power by 2030, the utility’s revised plan now calls for speeding up that effort, with significant renewable power additions before 2020. Clark said solar and wind power costs have dropped significantly, and he wants the utility poised to seize opportunities if Congress extends the federal wind production tax credit.

Xcel, which operates in eight states and serves 1.4 million electric customers in Minnesota, has been the nation’s most windpower-reliant utility for 11 years. Today, Xcel gets 15 percent of electricity from wind, and 37 percent from coal in its Minnesota region that includes North Dakota and South Dakota. If this plan goes forward, Xcel expects 33 percent of its regional electricity to be generated by wind and solar in 2030, while 15 percent would still come from coal.

Xcel also said it wants by 2025 to build a natural gas-fired generating unit in North Dakota.

The EPA gave North Dakota a two-year extension to write its plan to comply with the Clean Power Act. What a great opportunity for the state to really put together a great plan.

Wind will continue to be problematic; it cannot be justified on any grounds, but regardless, wind is a sideshow in the energy industry in North Dakota. But look at that last line in the StarTribune excerpt above: Xcel wants to build a natural gas-fired generating unit in North Dakota.

And this comes on top of the possibility of more than one petrochemical plants in the state before it's all over.

She was distracted by the Alabama - Georgia NCAA football game.
Posted by Bruce Oksol at 7:58 AM No comments:

This was how Reuters forecast yesterday's incredibly bad jobs report:

WASHINGTON, Oct 2 (Reuters) - U.S. employers likely added jobs at a brisk pace in September, a sign that the labor market is near full strength and could push the Federal Reserve to raise interest rates at one of its two remaining meetings this year.

The Labor Department's monthly employment report, due on Friday at 8:30 a.m. EDT (1230 GMT), will almost certainly show the U.S. economy is growing enough to push the jobless rate lower in the coming months.

Economists surveyed by Reuters forecast U.S. payrolls outside of farming rose by 203,000 last month, bouncing back from softer job growth in August despite worries a China-led global economic slowdown is sapping America's strength.

"The U.S. economy is alive and kicking," said Phil Lachowycz, an economist at Fathom Consulting in London.

The jobless rate was expected to hold steady at 5.1 percent in September because some workers who gave up jobs hunts in harder times were expected to return to the labor force.

But economists estimate that the economy currently only needs to add about 100,000 jobs a month to keep up with population growth. This is important because job creation above that level will push the jobless rate lower over time and raise the risk of a surge in inflation.

"We're still running well above that pace," said David Stockton, the Fed's chief economist between 2000 and 2011. He expects the U.S. central bank will raise rates in December. (This is not the David Stockton from the Reagan administration.]

In another sign of labor market tightening, Friday's report was expected to show significant upward revisions to job growth in prior months.

Still, inflation has remained subdued despite the jobless rate's sharp drop over the last year and Fed Chair Janet Yellen has said the Fed will hold off on rate hikes until it is quite confident that inflation is going to pick up.

Employment gains in September are expected to have been concentrated in service industries, in part because a China-led global economic slowdown appears to be battering U.S. factories.

The manufacturing sector is expected to have added zero jobs last month.

Construction sector payrolls, however, likely rose also thanks to a strengthening housing market.

But more layoffs in the energy sector, which is grappling with a nearly 50 percent drop in the price of oil over the last year, were probably a drag on mining payrolls.

Screenshot of the article, confirming the date this article was posted: 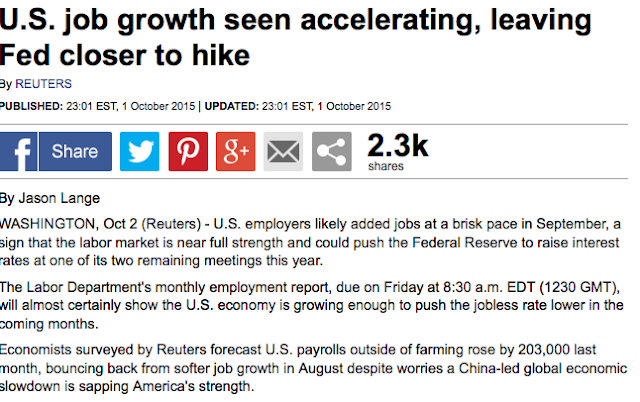 
American Power Group Corporation announced today that its Trident NGL Services Division has secured its second flare capture services relationship with one of the largest oil companies in the world whose identity has not been disclosed due to non-disclosure and competitive reasons.

APG's Trident Services Division will be up-fitting two of the customer's well sites with Trident's Modular Flare To Fuel™ Capture and Recovery System in the North Dakota Bakken oil and gas region.

Installation of both systems is scheduled to occur in the next thirty to sixty days allowing Trident to begin monetizing the captured flare by converting the gas to saleable Natural Gas Liquids (NGL).


American Power Group Corporation announced today that its Trident NGL Services Division is on schedule for an October installation of its latest Modular Flare To Fuel™ Capture and Recovery System.

This milestone will mark the third Trident Natural Gas Liquids system to be deployed on remote well sites for two of the top oil and gas companies in the Bakken Region of North Dakota.


The Commission also passed a gas capture credit system, crediting oil & gas companies who have exceeded their capture goals with up to ninety (90) days of credit if they were to fall below future goals.

APG's proprietary Trident NGL capture and recovery process is the emerging leader in capturing and converting a higher percent of the gases at these remote and stranded well sites with its mobile and modular design when compared to other competitive capture technologies that cannot currently meet the 80% to 91% capture regulations.

And again, the CEO's statement seems contradictory to what the commission did but maybe I misread it:


Lyle Jensen, CEO of American Power Group stated, "Last week's unanimous vote by the North Dakota Industrial Commission to retain, and in some cases, accelerate or increase the percentage of flare capture sends a strong signal to the industry that investment in both mid-stream gas gathering pipelines and options to capture associated gases on remote and stranded well sites have become an important priority.

The Bakken region has an estimated 2,500 well sites classified as remote or stranded where we intend to initially market and expand our Flare to Fuel™ capabilities."

For me, regardless of new/old requirements regarding flaring, this is a nice update regarding technology to manage flaring at remote sites.
Posted by Bruce Oksol at 6:53 AM No comments: