What do you think of this production profile?


Move in workover rig and pull rods and tubing. Nipple up frac tree and treesaver to isolate wellhead. Move in and rig up the frac fleet and frac well with approximately 14,000 bbls of gelled fluids containing approximately 400,000 lbs of the frack sand. Well will be frac'd pursuant ot NDAC 43-02-03-27.1. Nipple down frac tree and tree saver and run production equipment back into well. Return well to production.

But this isn't so great, really, is it? We see it all the time when a well is re-fracked.

And here's the graphic: 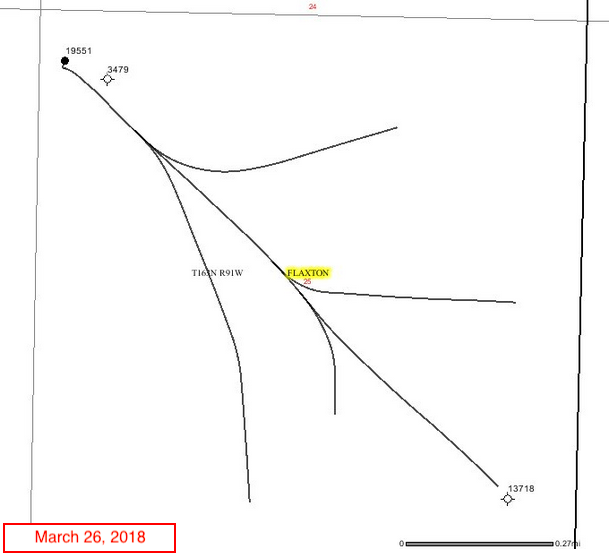 The well:
But here's the kicker: it's NOT a Bakken. It's a Madison well.

Don't believe me? Here's a screen shot of the scout ticket:

By the way, what's the best this well has ever done? From the very beginning:


The sundry form / completion form with the completion data says the well:
Yes, it's the Madison -- and we saw it first in North Dakota -- LOL --

Disclaimer: in a long note like this there will be factual and typographical errors. In addition, I could have mixed up some of the data (production data, frack data, etc) but I doubt it. When I see a jump in production in a horizontal well 1,320 feet away it makes me think I recorded something incorrectly, but I think it's all correct. I certainly appreciate any feedback if any of the data is incorrect.

At this post, I posted the production data for #19424 -- but looking at it now, not quite sure why I posted it. Whatever.

With updated production, it's time to look at it again.

There is no evidence that any of the wells below have been re-fracked. FracFocus has no data for a re-fracks; and, there are no sundry forms suggesting the three older wells were recently re-fracked. But the production has jumped so much it's hard to believe these wells have not been re-fracked.

In addition, note the distance between the wells. Pay attention to which wells are middle Bakken (MB) and which are Three Forks (TF). 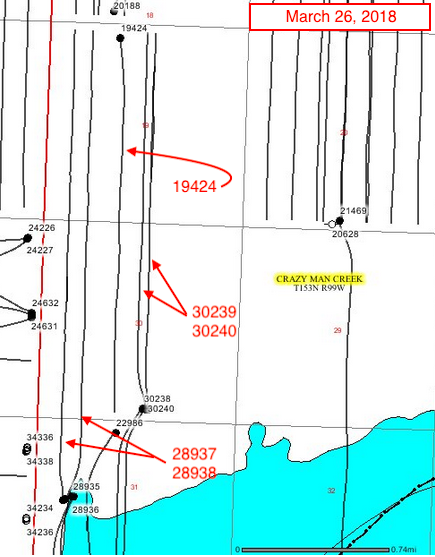 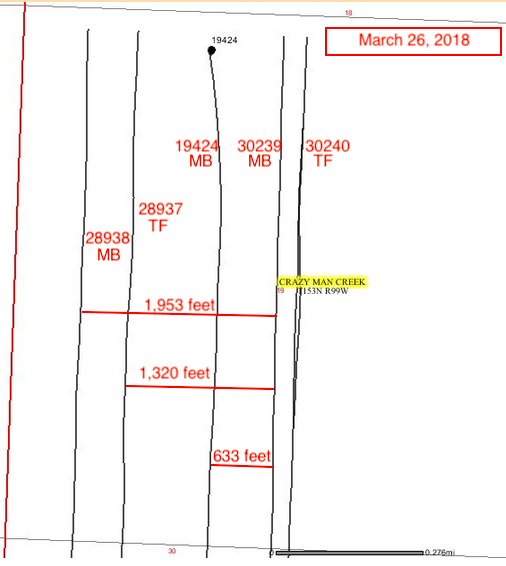 Recent neighboring fracks:
What about the other two wells of interest, #28937 and #28938? Frack data:
Recent production data for these two wells.
#28937 TF (huge jump in production, but delayed a month or two compared to wells above):

Bottom line:
Disclaimer: in a long note like this there will be factual and typographical errors. In addition, I could have mixed up some of the data (production data, frack data, etc) but I doubt it. When I see a jump in production in a horizontal well 1,320 feet away it makes me think I recorded something incorrectly, but I think it's all correct. I certainly appreciate any feedback if any of the data is incorrect.'

Note: if what I have posted is correct, and if what I see is correct, this has huge implications for the Bakken and the Three Forks.
Posted by Bruce Oksol at 11:22 PM No comments:

I have a pretty good "feel" for US crude oil production, inventories, supply and demand, etc., after blogging for the past eleven years on the Bakken. I have almost no "feel" for the same metrics globally. It seems "everyone" is writing that global inventories of crude oil are well below their five-year average, including this from oilprice.com:


A year and a half on from OPEC’s original deal to limit output, the surplus oil stashed in storage tanks around the world are nearly back to average levels. However, by all indications, OPEC is not ready to ease up on the production caps, with top officials signaling a desire to keep the cuts in place into 2019.

But that might require changing of the definition of a “balanced” oil market. OPEC has consistently held up OECD inventories as the metric upon which it was basing its calculations. The goal was to drain inventories back down to the five-year average. With OECD inventories about 44 million barrels above that threshold in February – down from a roughly 300-million-barrel surplus at the start of 2017 – the goal will likely be achieved at some point this year, perhaps in the second or third quarter.

So, let's see if we can find a graphic of the historical global crude oil inventory. 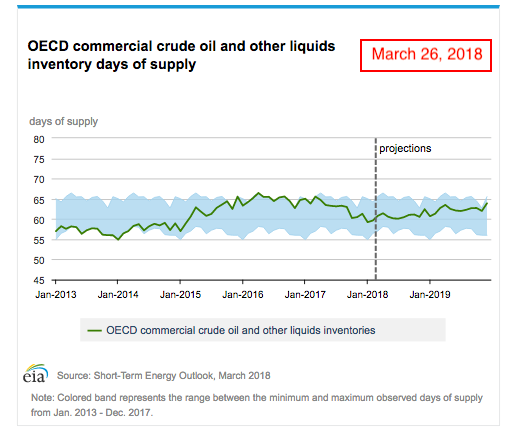 This is what I see in that graph:

Posted by Bruce Oksol at 9:31 PM No comments:

An old Knoshaug well has come off-line (March 26, 2018). When I see that, my first thought: neighboring wells soon to be fracked.

The most important story line here: Elm Tree oil field. Although not updated, the Elm Tree is followed here.
Posted by Bruce Oksol at 7:40 PM No comments:

When a well is declared a “stripper” by the ND Oil and Gas Division the state
tax is lowered from 10% to 5%.  At a given volume and price, the net royalty is
5% higher on a stripper well.

Later, 5:43 p.m. Central Time: the first answer I got, from Phil McPherson, a CFO in Newport Beach, CA:


Though each lease varies, I have never seen a clause in the 100's of leases that I reviewed as having something for stripper wells that is different than an "economic" well.

I've long forgotten -- if I ever knew -- does anyone know how royalties are affected when a well goes to "stripper" status?

A reader wants to know and I'm hesitant to answer.  E-mail responses are kept confidential; comments can be made anonymously. If you have a great answer and want credit for the answer, let me know. Thank you, on behalf of the reader who is curious.
Posted by Bruce Oksol at 4:07 PM No comments:

Oh, one last political observation. In foreign affairs, every president has a gazillion irons in the fire. For Trump, just a few of the top ten: Russia, China, Iran, NAFTA, the wall, the Korean peninsula, Saudi Arabia.

It's interesting to rank those on the foreign-affair list based on media coverage. It appears to me that Russia has fallen to the bottom of the top-ten list even with the president expelling 60 Russian spies and "shuddering" (as the AP calls it) the Seattle consulate? Rising to the top of the list: China. I think the focus on Asia by Trump has really, really gotten Kim Jung Un's attention.

Okay, one more observation. I realized this past weekend, it's impossible for folks like me to hold a "political conversation" with others. Why? Because no one knows what "fake news" each has been reading. As an example, I have no idea where my wife gets her "sources." She assumes she knows where I get my "sources," but I suspect she is really, really wrong. Mostly because I keep changing my top ten news "sources."

Right now, the best political analyst on radio: Rush Limbaugh. Everyone agrees (based on mainstream media outslets), whether one agrees with him or not.

By the way, my son-in-law and I agreed that of the three (Bernie, Hillary and Trump), Bernie was the most dangerous (had he been elected). Two hours after noting that, I realized I was wrong. Counter-intuitive, and my son-in-law (nor my wife) would agree with my reasoning.

One book today: The Most Dangerous Book: The Battle for James Joyce's Ulysses, Kevin Birmingham, c. 2014

First "home" after leaving Ireland with Nora: Pula, a small outpost on the Istrian peninsula.

Trieste, Italy: much like Dublin when Nora and James moved there. Trieste's predominantly Italian population had been under Austrian rule for hundreds of years, long after the unification of Italy in 1861. Trieste Italians demanded to be part of the new Italian state.

Back in 1801, a new law from London simply dissolved the Irish assembly to create the United Kingdom of Great Britain and Ireland. From then on, a continued fight between Irish and the English.


Ulysses began as a whim. It was originally an idea for a short story to tag along in Dubliners. Alfred H. Hunter -- the lonely, benevolent Jew in Dublin who had lifted Joyce from the dirt in St Stephen's Green -- was a hero of the Trojan War, the protagonist of Homer's greatest epic, the king of Ithaca, Ulysses. The Hunter-as-Ulysses equation was well suited for a short story but the concept had undergone some unforeseeable growth in Joyce's mind. In 1914, he began gathering ideas. Joyce mapped the events of hte ancient tale of the Odyssey unto Dublin: a funeral in Glasnevin cemetery was a descent into Hades. His friend Byrne's little flat on Eccles Street was Ulysses' palace in Ithaca, and the barmaids at the Ormond Hotel were the Sirens. He had a name for his Ulysses: Leopold Bloom. Stephen Dedalus was Telemachus, Ulysses' son. Stephen was a son whose father lost, and Bloom was a father finding his way back to his son. His wife Molly, was Penelope patiently waiting for her husband's return from the Trojan War.


Joyce wanted Stephen's thoughts to be clipped and prismatic. He wanted to strip thoughts and emotions down to their essentials (no stream of consciousness; the very opposite of Henry James). He wanted density, the bones of communication, the sharp utterance, the urgent telegram, the MOTHER DYING COME HOME FATHER (think Hemingway).

Chapter 5: Smithy of Souls --
the story of Miss Harriet Weaver --
this chapter worth the price of the book.

Ezra Pound, Harriet Weaver, and Dora Marsden were only marginal figures in a world preoccupied by war -- but a supportive coterie was enough to encourage Joyce to venture much further out ito this writing than he ever had before.

Magazines (at that time) were modernism's blogosphere.

The Little Review, founding editor, Margaret Anderson -- the woman destined to bring Ulysses to the public, no matter how controversial it was. In the March 1915 issue, Anderson became possibly the first woman to advocate gay rights in print ...

Anderson grew up in Indiana and attended Ohio's Western College for Women, an offshoot of Mount Holyoke.

Ezra Pound wanted The Little Review to be his "official organ" in the United States; it had 2,000 subscribers, exactly what he wanted.

Press advertising, virtually nonexistent before the Civil War, became a billion-dollar industry by WWI -- think the Internet and social media.


Whatever else happened, the Joyces always ate dinner as a family. Mother (Nora) and father (James) spoke Triestino with Giorgio (older sib, first and only son) and Lucia at various restaurants as if sharing a secret argot, a verbal performance of a shared life from from Zurich.

Somehow, p. 99, despite war, pain, atropine hallucinations and his inability to earn an income - Joyce found ways to write Ulysses.

And this is where I will quit for today.
Posted by Bruce Oksol at 11:29 AM No comments:

Wells in the graphics not elsewhere on this page:
Coming off confidential list this week, the Hellandsaas wells, including:
The graphics: 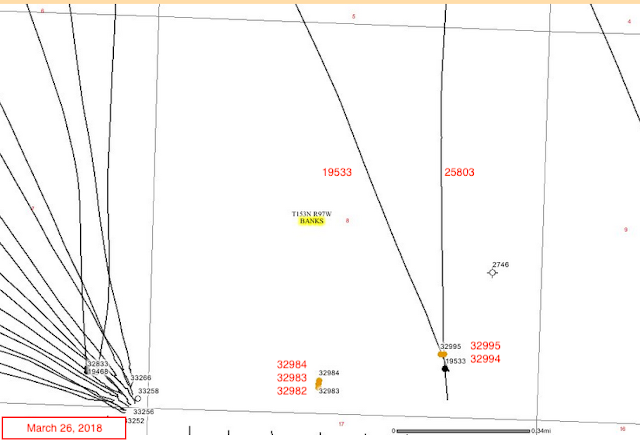 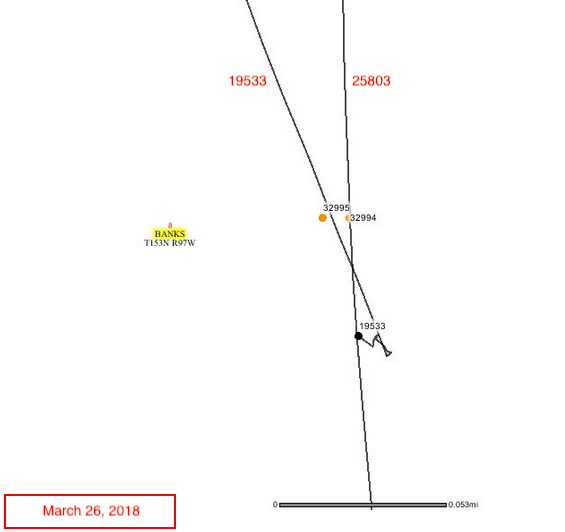