I will leave you with this:

Sent in by a reader. Thank you. Tom's Place, Dickinson.
Posted by Bruce Oksol at 12:24 PM No comments:

OXY USA Has Been Updated

As you scroll down quickly through the production numbers (and some comments), one can see a number of story lines. I might come back to these story lines later.

For regular readers, my thoughts about OXY USA continue to evolve.
Posted by Bruce Oksol at 12:21 PM No comments:

Wells Coming Off The Confidential List Over The Weekend, Monday; Nothing Particularly Noteworthy Except Number Of Wells To DRL Status (10/17); Legacy With A Nice Spearfish Well; Remember: Refiners Are Looking For Spearfish Oil

The LA Times is reporting:


To shave precious minutes off wait times, Ralphs has been installing technology to measure foot traffic in nearly all of its supermarkets.

Known as QueVision, the system uses hidden infrared cameras with body heat trackers to figure out how many customers are shopping at any given time. Managers use that information to redeploy workers to the cash registers when things get busy.

It's already paying off. QueVision has trimmed the average time it takes to get to the front of the line to roughly 30 seconds from the national average of four minutes, a Ralphs spokeswoman said.

The checkout system is part of a long-overdue effort by traditional grocery chains to evolve and stay competitive through the use of technology.

The $518-billion grocery store industry hasn't made a major leap forward since the bar code scanner was introduced in the 1970s. Thin profit margins have kept the shopping experience pretty much the same for decades: squeaky shopping carts, long checkout lines and aggravating scavenger hunts to find products.

It was noted in the article that consumers tend to avoid stores where there are too few store employees, so eliminating workers is not the key to success. With this technology, grocery stores will be able to re-deploy their workers to better serve customers. If the mix is 8 "checkers" and 0 navigators, one can easily see this going to 4 "checkers" and 2 navigators. Folks may not need navigators but navigators will cut down shoplifting and ensure cleanliness and neatness in the aisles.

But, yes, if push comes to shove (particularly with ObamaCare), grocery stores will shed workers. More and more, grocery stores are seen as necessary only for fresh produce and dairy products.
Posted by Bruce Oksol at 11:01 AM No comments:

The Bakken As Laboratory; 48 Wells In A Spacing Unit


Initially EOG believed that from 640 acres of its Eagle Ford property the company could recover 4.5 million barrels using 65 acre spacing.

Through trial and error, EOG has discovered that 40 acre spacing is actually going to work better which means the company will increase the amount of oil recovered by 42% and the net present value of that acreage from $76 million to $103 million.

In an age of increasing oil prices, I believe holding companies like EOG that control the most oil in the ground is a sound strategy. Time and experimenting with how to develop the land is going to increase the value of the acreage these companies control.

CLR is testing the same hypothesis in the Bakken.

Related links:
Before we get started, let's break down the paragraph in bold:
So, now, back to the Bakken.
Now, back to an early graphic of targeting multiple sub-formations in same spacing unit (same link as above).

Now, a graphic of how CLR spaced twelve or fourteen wells in one spacing unit in the past. These are the Hawkinson wells in Oakdale oil field. Note how the wells are spaced across (east-to-west) the 1280-acre stand-up (running north-to-south) spacing unit: 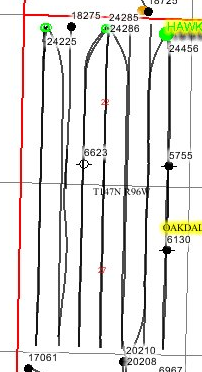 It's hard to tell, the wells are pretty bunched up in the small graphic, but there are 12 wells in the north running south (3-1-5-3) and then two additional wells running from the south (14 horizontals total in this spacing unit). And, oh by the way, two old Madison wells that are now abandoned (one produced 110,000 bbls of oil; the other 340,000 bbls of oil).

So, stopping for a minute to catch our breath. Look at again at the milestones above, looking at the Bakken as a laboratory, perhaps led by CRL, QEP, CLR, KOG, and many others.

Now, and this gets most interesting. This was noted by a reader (thank you). I don't read NDIC cases or orders so I would have missed this. I would have eventually seen it, but I would not have seen the back story. And in this case, the back story is as important as the outcome. 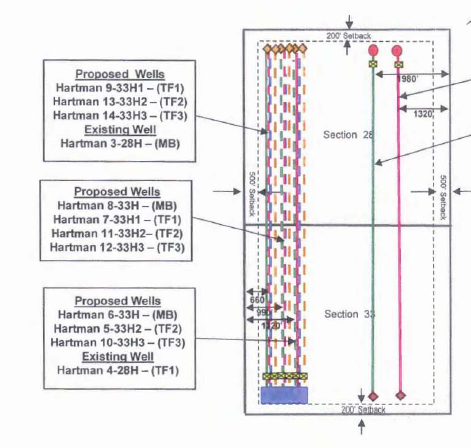 I hope you all see what I'm seeing (and what I think the reader who sent me this link saw); I hope I am not misreading this.

First, this is a stand-up spacing unit, just like the Hawkinson wells in the Oakdale oil field.  These are sections 28 and 33 in T146N-R95W, in Chimney Butte oil field. [Chimney Butte is southeast of Oakdale; they touch at their southeast/northwest corners; both in Dunn County, both outside the reservation.]

This is what I'm seeing.

In the Oakdale/Hawkinson wells, the wells were spaced across the entire spacing unit, west-to-east.

However, in the Chimney Butte/Hartman wells, CLR will place 12 wells (ten new ones, two existing ones) in one-half of one-half the drilling unit. The wells will target the middle Bakken, and the upper three benches of the Three Forks.

If successful, this could work out to 48 wells in one 1280-acre spacing unit. The norm in the Bakken is the long lateral (1280-acre spacing) but if they ever go back to short lateral/640-acre spacing, one could see 96 wells in two sections. Of course, by that time, I will be long gone. And, of course, by then, perhaps water flooding or EOR. I'm still convinced that best recovery occurs closer to the heel (closer to the kick-off point) than the toe (where the horizontal ends). But I digress. Ignore this paragraph.

Now the back story that is in the case/order that I would not have seen had the reader not sent it to me (again, a huge thank you). Both MRO and BR, who have working interests in these wells, objected to the proposal. They wanted a full hearing by the commission, or something along that line (I went through it quickly, and probably missed some of the details). The arguments submitted by MRO and BR: a) too many unnecessary wells; b) correlative rights; and, c) the risk of setting a precedent for density drilling.

My two cents worth, regarding the objections:
Are you still "holding that thought"? The one at the very top of the blog: through trial and error EOG discovered that 40-acre spacing was much better than 65-acre spacing in the Eagle Ford in 640-acre sections. Trial and error.  The Bakken as laboratory. We won't know until we try.

A few years ago, MRO and BR could have objected to multi-well pad drilling due to a) unnecessary wells; b) setting a precedent; and, c) correlative rights.

I see CLR as the scrappy fighter that keeps pushing the envelope (to coin a phrase) whereas BR (part of COP) as being very, very conservative, and plodding. MRO, ditto, but it pains me to say that.

With the Feds ready to lay down new fracking rules, it might be nice to get as many of these permits approved as possible. Once those rules come down, a nine-month inventory (or more) of permits might be nice to have.

There are still more story lines to this case/order but I will stop for now. 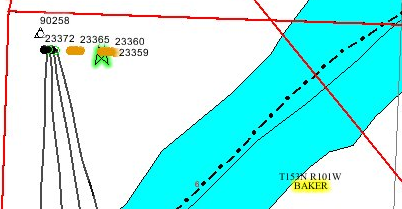 
Initially EOG believed that from 640 acres of its Eagle Ford property the company could recover 4.5 million barrels using 65 acre spacing.

Through trial and error, EOG has discovered that 40 acre spacing is actually going to work better which means the company will increase the amount of oil recovered by 42% and the net present value of that acreage from $76 million to $103 million.

In an age of increasing oil prices, I believe holding companies like EOG that control the most oil in the ground is a sound strategy. Time and experimenting with how to develop the land is going to increase the value of the acreage these companies control.

The important point in the linked article, which I posted in the "indent" above, by the way, has to do with NDIC Case #20678 and Order #22983. I will get to that story later. Stay tuned. It is a great story, noted by a reader. I never would have seen it.
Posted by Bruce Oksol at 8:46 AM No comments:

A Nice Story On Kathy Neset


Kathy Neset may be the only oilfield geologist who uses a bendable drinking straw as a key tool for her job.

The Tioga woman uses the straw to educate people about horizontal drilling, one of the technologies that’s unlocked the Bakken and made North Dakota the second-highest oil-producing state.

With the whole world interested in knowing more about what’s happening in North Dakota, Neset is in high demand to inform visiting federal officials and local residents about the state’s geology and the technology making the boom possible.

“I love sharing the story of this Bakken and then letting people make up their minds as to whether they think this is a good thing for North Dakota and for America,” said Neset, president of Neset Consulting Service.

Neset, a New Jersey native and Brown University graduate, moved to North Dakota in 1979 to work as a wellsite geologist.

I think there was more to the story why she moved to North Dakota. The North Dakota oil patch was not exactly the center of the oil universe in 1979.
Posted by Bruce Oksol at 8:36 AM No comments:

Email ThisBlogThis!Share to TwitterShare to FacebookShare to Pinterest
Labels: Neset

This was posted at The Williston Wire but seems to deserve a stand-alone post: