Twitter On Fire Tonight -- Saudi Will Take All Steps Necessary To Stop Slide In Oil -- August 7, 2019

I can't recall, in all that time, the twitter "oil" community so on fire.

I've always felt the crisis was set off by the "mark-to-market" rules.

I'm not the only one.

The news coming out of Saudi Arabia today has that same feeling, but this time with regard to oil. Scrolling through twitter tonight reminds me of watching CNBC live the day the market crashed in 2008.

The wells:
The graphics: 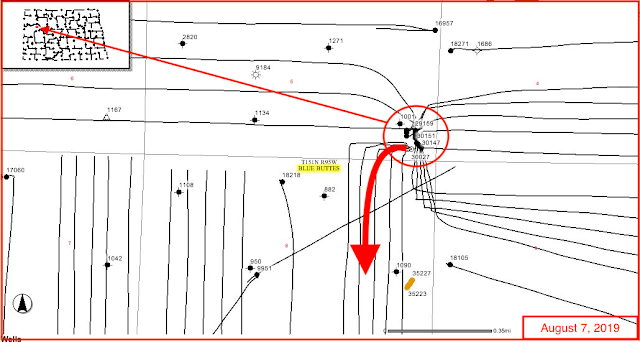 Trivia: some readers may note #9951 near the bottom of the graphic, right in the middle (east to west) with two laterals, one running to the northeast; and one to the southwest. The first lateral was drilled back in 1983; a re-entry to the southwest some time later. The target was the Madison; it produced a total of 319K crud oil before being abandoned in 2017. 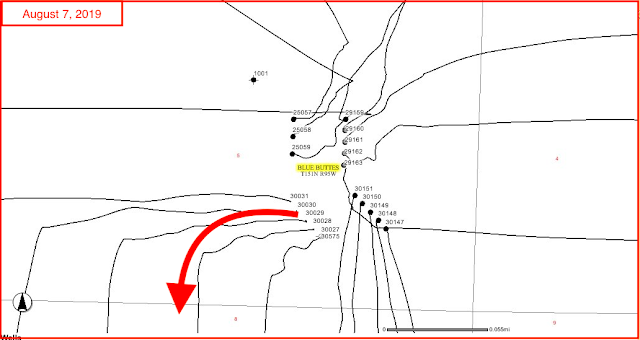 To the east:
To the west:

If the Fed chairman is not following this graphic .... 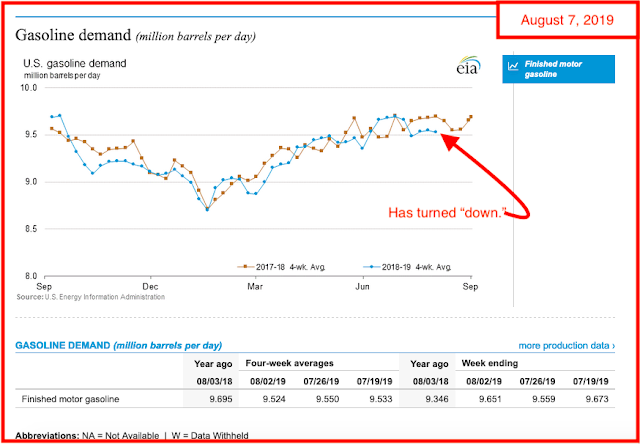 Currency: with the Chinese renminbi at an all-time low, I assume Tim Cook (Apple, Inc) is locking in his wage contracts and material contracts in China. His tariffs back into the states: only 10% of "manufactured cost of his product," but I doubt Apple will cut the price of their products.
Posted by Bruce Oksol at 2:49 PM No comments:

Wow: I'm in a great mood. The market is back where it should be for those wanting to invest. I doubt any company will cuts its dividends based on what is obviously a short term correction. I would imagine the "Fed" is wringing their collective hands. I have my new book for the next week for reading. Poolside in 101-degree weather.

Tesla: insurance -- oh-la-la -- from zerohedge -- next time you rent from Enterprise, or Hertz, or Avis, ask for an "exotic" car and then see what the insurance will cost you. Yes, the Tesla would be considered an "exotic" car. The car rental companies aren't dummies.


After reviewing Teslas listed at current auction, a bulk of them have minor fender benders, some have electrical issues, but most have been in fender benders that if it were a standard petrol engine automobile, would be easily fixable by a local dealership.

It seems that insurance companies are slapping salvage titles on crashed Teslas because it's "near impossible to repair them, the authorities and Tesla will prevent them being put back on the roads," said one Twitter user who was commenting on an SCA Twitter post of a newly listed crashed Tesla for auction.

Tesla: auto-pilot? Ambulance-chasing is a phrase we now see commonly associated with Tesla. From zerohedge. Does zerohedge have a problem with Musk Melon? By itself, this is a non-story, but zerohedge seems to have an agenda when it comes to Tesla.

Brexit. You think America has problems? Wait until "gin" is rationed. LOL. 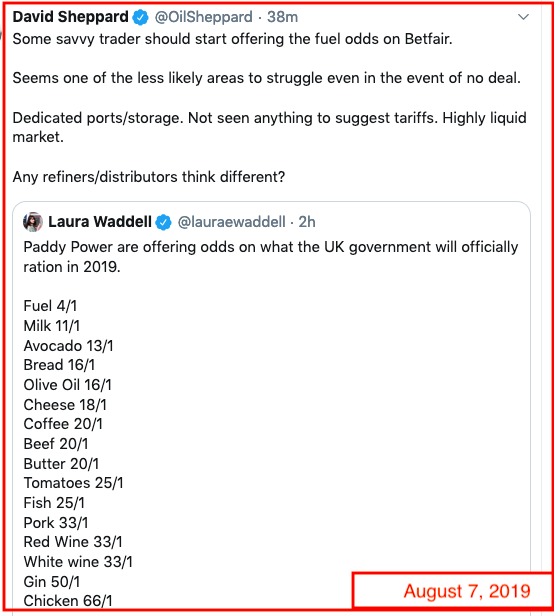 A reader alerted me to this link, a press release: other than the headline, not much real data provided. Data points:
For newbies: there are four main counties, right now, in the Bakken:
Comparing size of counties, first the Permian, in square miles, TX:
New Mexico (Permian):
North Dakota:

I returned the two library books I had checked out, due tomorrow, and checked out a new one.

This will be a quick read: Chasing the Moon: The People, The Politics, and the Promise That Launched America into the Space Age, Robert Stone and Alan Andres, c. 2019 (50th anniversary, of course).

The big question / answer I'm looking for: how much did JFK know when he made his famous speech about landing a man on the moon and safely home again? How did he know it was feasible, technically, financially, and politically. And of the three could have precluded the outcome.

As an example: the bullet train in California:
Or, in a more snarky vein: JFK convinced Americans we could go to the moon; Jerry "Moonbeam" Brown couldn't even convince Californians the "need" / feasibility of a bullet train that is commonplace in Japan and China.

And then the price of oil tanks. 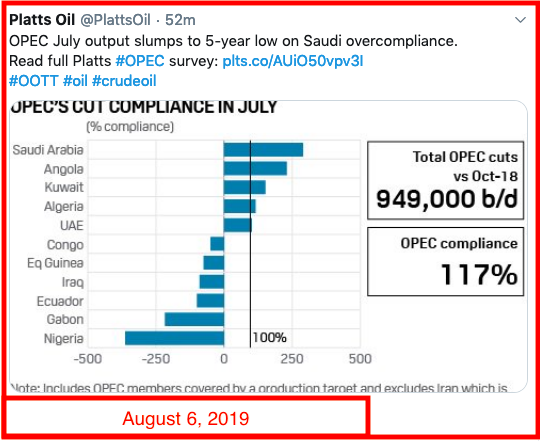 Years ago when we were in Europe we collected a number of very nice Swarovski pieces. Swarovski had not yet been "discovered"; prices for crystal in Europe were incredibly good; and, the dollar was very, very strong, giving us even better deals.

Once we returned to the states, we could no long afford Swarovski. Of course, we had all the crystal we wanted/needed, so it was not an issue.

But then earlier this week, we happened upon a Swarovski miniature train set in the original box, brand new -- for $49 -- in a small second-hand shop. In this particular gift shop, jewelry is priced at 50% of the label. The owner/manager considered this particular Swarovski to be jewelry. So, this cost us $25.

Here is what this "retired" little train is worth elsewhere:

This is an incredibly good interactive site. You might have to play around with the filters to navigate the site but once you figure it out, it's quite amazing. 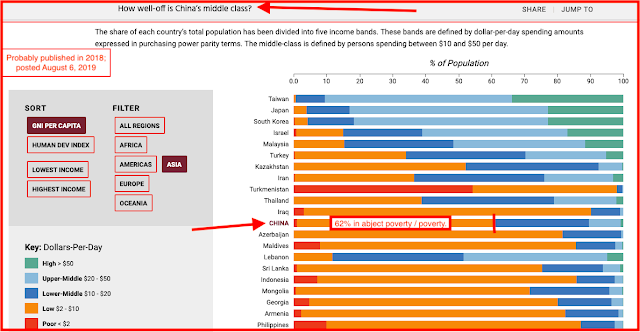 Be sure to pay attention to the "key" for the above graphic: 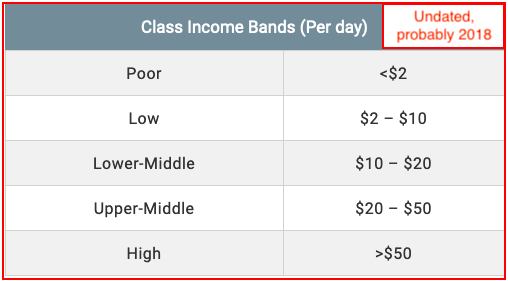 My annotations regarding the key: 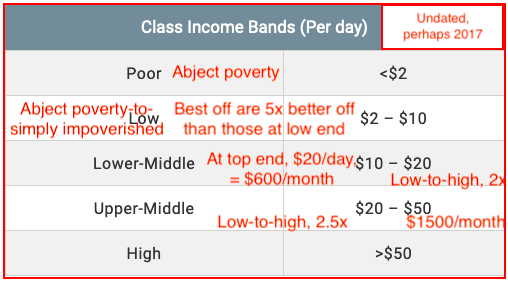 I always find it interesting how analysts "divide" / label the data. In this case, the range for the "low-income" demographic: from high ($10) to the low ($2), that's a 5x range.

The other divisions are not nearly as wide. On a scale like this, $10 is incredibly different than $2 and yet "that" is all grouped together. The "lower-middle-income" has the narrowest of range, only $10 to $20.

Email ThisBlogThis!Share to TwitterShare to FacebookShare to Pinterest
Labels: China

FWIW: Atmospheric CO2 Is Not A US Problem -- Except For Faux Environmentalists -- August 7, 2019 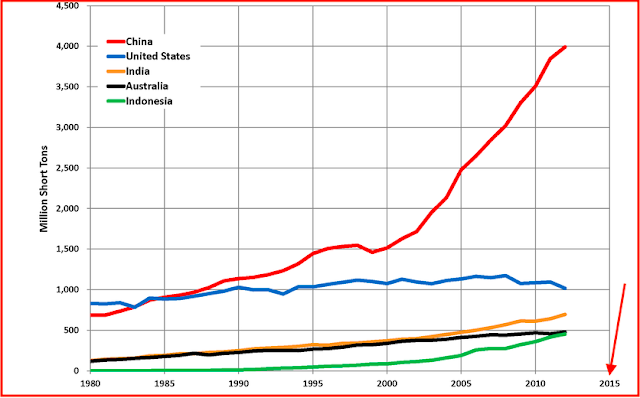 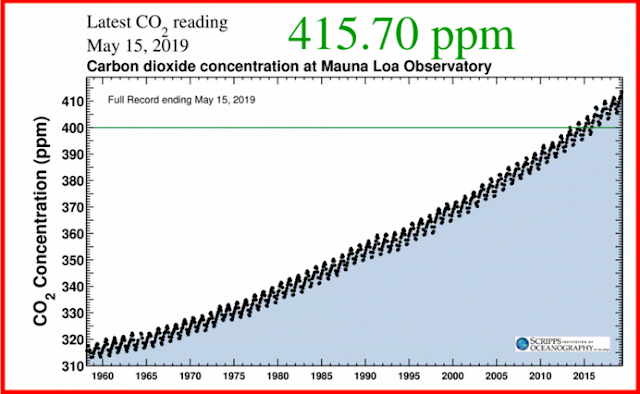 "The last time atmospheric CO2 was this high, there were trees at the South Pole"

And the problem with that? 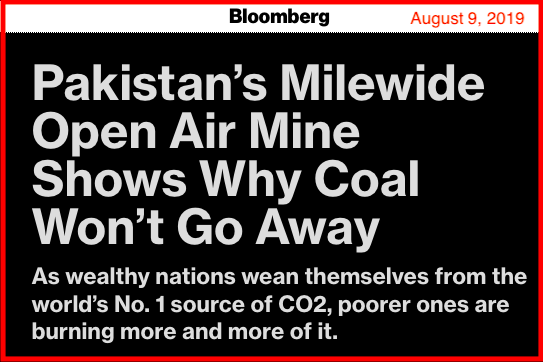 If the earth really was going to end in twelve years, or eleven years, or ten years, or eighteen months dues to atmospheric CO2 would we be giving "these" countries a "pass"?
Posted by Bruce Oksol at 10:02 AM No comments:

Because I'm way behind in my blogging, short clips and links. I may come back to these later. Many (most?) articles I have not yet read.

Is the US shale boom winding down? Rigzone contributor, Nicholas Newman. Link here. The headline speaks to the shale revolution:
For decades, OPEC was the swing producer, but due to the way OPEC operated, it was glacial in making/executing decisions.

Venezuela: Trump imposes new sanctions. Pretty much the "death blow." Bloomberg. Even CVX at risk. In a tweet yesterday, it sounded like "Bolton" was not giving CVX any warm fuzzies.


"If Chevron leaves, the country will almost certainly nationalize its oil assets," said Muhammed Ghulam, an energy analyst at Raymond James. "Maduro is in a fight for his country. He needs all the cash and resources he can get."

Chevron is one of the leading private oil companies in Venezuela, which has more proven oil reserves than any other nation on the planet. ExxonMobil (XOM) and ConocoPhillips (COP) left years ago, after former Venezuelan President Hugo Chavez started nationalizing foreign-run oilfields.

Venezuela: rogue state -- would CVX be allowed to operate in North Korea, Iran, or Syria? 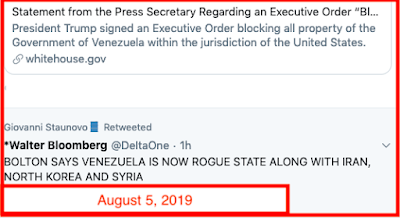 As predicted: Apple likely to absorb any US tariff cost increases on hardware. Exactly what I said just a few days ago. 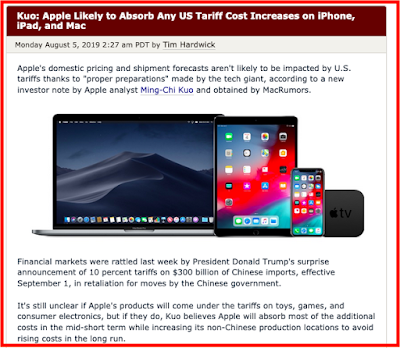 The Road To Germany -- Wind Energy Is Collapsing In Germany


Original Post
Anyone paying attention knows that "wind energy in Germany" is collapsing. We've followed that story for many, many years on the blog. We even devoted a "Road-To-Germany" tag just for this reason.

This is very, very interesting -- I did not see this coming. As bad as things were with regard to wind energy in Germany, I was not aware of how bad it really will become. Remember: Germany shut down a lot of alternative energy sources (e.g., coal) betting the farm, as they say, on wind. 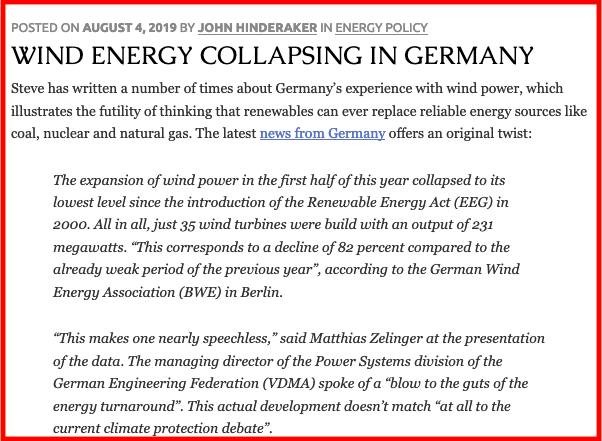 
In fact, “when in 2021 thousands of wind turbines come to the end of the 20-year subsidy period of the Renewable Energy Act, more wind turbines will be demolished on balance than new ones will be added, the wind industry fears.” It couldn’t happen to a more deserving industry.

Unlike in the past too low subsidies for wind power is not the cause this time. “It’s not about the money,” said Albers. “Too low subsidies” is an oxymoron. But here is the new twist:

The most important cause lies in the legal resistance of wildlife and forest conservationists fighting new wind farms. The BWE President referred to an industry survey of the onshore wind agency. According to its findings, more than 70 percent of the legal objections are based on species conservation, especially the threat to endangered bird species and bats.

The conservationists have a point. One of the worst features of both wind and solar energy is that they are terrible for the environment. They use up an enormous amount of land that otherwise would be available for agriculture, development or recreation. They are eyesores. And they kill huge quantities of wildlife.

Later, 9:26 a.m. CT: I do not understand bonds, etc., so I may have this a**-backwards, as they say, but it certainly looks like:
A reader just sent me this -- look how "cheap" money is -- this is a huge, huge deal for everyone involved -- my two cents worth -- a huge win-win for all. A year from now things are going to look quite rosy. See disclaimer below.

Original Note
Link here, fascinating on so many levels.


Occidental Petroleum Corp. is selling $13 billion of debt to help finance its acquisition of Anadarko Petroleum Corp. after receiving over $75 billion in orders for the deal at the peak.

It’s the biggest demand for a debt sale since Saudi Arabia’s Aramco received more than $100 billion in orders in April, and a sign that investors are willing to take risk again just a day after the trade-war induced volatility shook global markets.

Occidental is selling bonds to fund the $38 billion takeover in 10 parts. The longest portion of the offering, a 30-year security, may yield around 2.25 percentage points more than Treasuries, down from initial price talk of 2.7 percentage points.

Four other investment-grade borrowers are marketing debt deals today as issuers regained their confidence after the latest flareup in the U.S.-China trade war brought sales to a near halt on Monday. High-grade credit spreads jumped 6 basis points on Monday, the biggest single-day widening relative to risk premiums since June 2016’s U.K. Brexit decision.

I track the OXY-Anadarko merger here.
Posted by Bruce Oksol at 9:11 AM No comments: