Activity southeast of Williston in the Avoca oil field: the CLR Collison wells are being completed. There is a rig on site.

There is a rig on site on this pad for these wells: 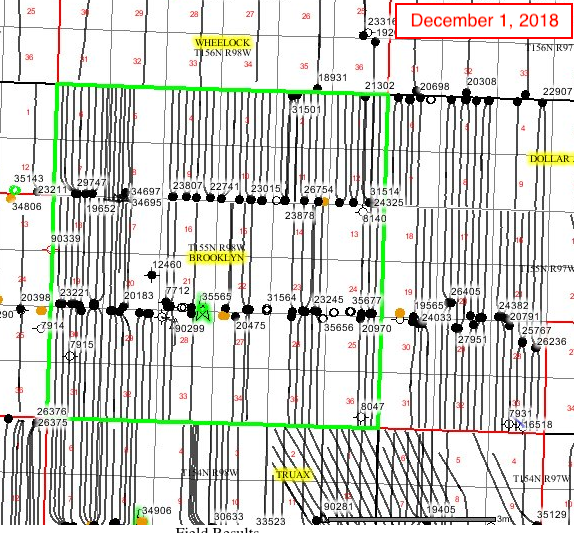 This well is celebrating her 61st year of production, a vertical well:


All About That Bass, Postmodern Jukebox
Posted by Bruce Oksol at 7:14 PM No comments:

Holy Mackerel: This Is What The Bakken Is All About

For obvious reasons, extrapolation has to be taken with a proverbial grain of salt, but ...

I just posted this last week:

These were the new neighboring wells recently completed, fracked for the first time:

Posted by Bruce Oksol at 6:40 PM No comments:

I don't want to wait anymore
I'm tired of looking for answers
Take me some place where there's music and there's laughter
I don't know if I'm scared of dying but I'm scared of living too fast, too slow

Lyrics as good as any of Leonard Cohen's.

Yeah, that explains it: a Swedish folk band.
Posted by Bruce Oksol at 11:59 AM No comments:

Beautiful, beautiful day in north Texas. Not a cloud to be seen; bright sunshine. Almost 60 degrees now and should hit 70 degrees by the end of the day. No precipitation forecast for the next five or six days and I did not look at the forecast any farther out.

Top energy story of the week: Hubbert's peak oil theory with another nail in the coffin. Despite $50 oil, US oil and natural gas reserves hit a new all-time record -- and by a large, large margin. My hunch: the record will be broken again. And it won't take as long this time. The previous record was back in 1970, I believe. Graphics here. USGS jaw-dropping assessment of the Permian.

National:
US crude oil inventories now over 450 million bbls; more than 7% higher than average.
US oil production is rising at its fastest pace in 98 years.
Oil glut? Made in the USA.
WTI drops below $50 before recovering to $51.
Record low gasoline prices not "moving" gasoline demand.
Earthquake shuts down Alaska pipeline.

Production by association
Many examples; this is a Kermit well
Wiley and Bailey
The Nathan Hale

Commentary
The manufacturing stage of the Bakken
Posted by Bruce Oksol at 8:48 AM No comments: