State production, crude oil, could North Dakota drop to #3?
So, it looks like:

New Mexico's energy future. New Mexico is not as friendly as North Dakota and Texas when it comes to fracking, Big Oil, so there's always a chance things could turn in New Mexico.

On another note. Earthquakes.

Fortunately for the oil industry the recent swarm of earthquakes cannot be blamed on fracking. My hunch: it has to do with global warming. From The Los Angeles Times:

There have been more than 700 earthquakes recorded in the Fontana area since May 25, ranging from magnitude 0.7 to magnitude 3.2, recorded Wednesday at 5:20 p.m., according to Caltech staff seismologist Jen Andrews. Three of the quakes have been of magnitude 3 or greater.

The swarm initially moved northward, but something unusual began Friday when the swarm turned around and went south, back toward the middle of the swarm and the 60 Freeway.


That was the first song, and the only song, I heard on the radio while driving into work this morning. Wow, did this take me back to another life a long, long time ago.

The song transported me back to Los Feliz Boulevard. I don't know why.

There, of all things, I never knew this, Los Feliz takes a sharp left turn, heading south, and becomes Western Avenue.

Western Avenue runs straight south, parallel to the I-110, ending at White Point Park, on the Pacific Ocean, in the city of San Pedro.

Western Avenue is just a short walk from where my wife's parents lived in San Pedro. May and I often walked up the steep hill from their home near Gaffey Street up to Western Avenue. 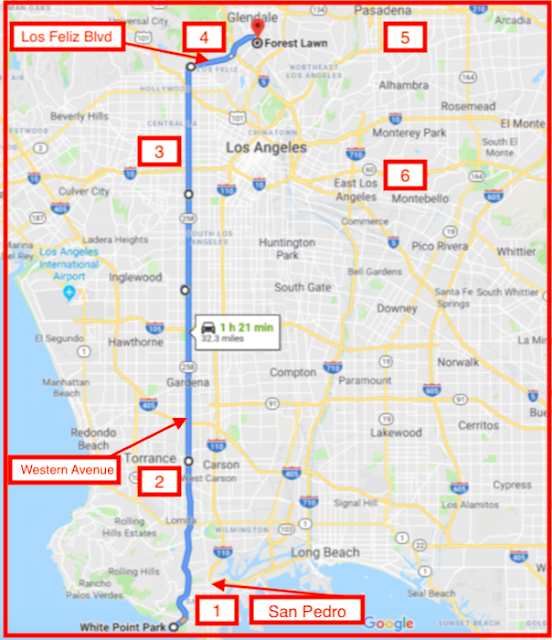 1: San Pedro; home of my in-laws. May's family settled there while her father completed two tours in Vietnam.

2: Del Amo Mall, Torrance, CA: May's Japanese mom was a waitress at an upscale Japanese restaurant next to the shopping mall.

3: Western Avenue crosses I-10, the "old Route 66" which ended at the Santa Monica pier.

5: South Pasadena -- where I lived when going to USC School of Medicine.

6: USC School of Medicine. Also, the jumping off point, I-10, on one of my cross-country hitchhiking trips. I hitchhiked from downtown Los Angeles to Sioux Falls, SD, leaving on a Friday night, and getting back to my college dormitory early Sunday morning.

The New York Times Book of Physics and Astronomy: More Than 100 Years of Covering the Expanding Universe, edited by Cornelia Dean, c. 2013.


According to the Standard Model, the Higgs boson is the only manifestation of an invisible force field, a cosmic molasses that permeates space and imbues elementary particles with mass. Particles wading through the field gain heft the way a bill going through Congress attracts riders and amendments, becoming even more ponderous

Without the Higgs field, as it is known, or something like it, all elementary forms of matter would zoom around at the speed of light, flowing through our hands like moonlight. There would be neither atoms nor life.

The Higgs field? That sounds a lot like the "ether" early physicists thought existed.

From page 320 in the book, from an article published in The New York Times, on September 28, 1930, physicists were talking about "ether waves." That concept was null and void decades ago, but now -- the Higgs field -- certainly sounds like the "ether" to me.