PowerLine is preaching to the choir; the alt-left won't read it. But that's fine.

For the rest of us, this post at PowerLine is a must-read, and will be archived in case the link is broken. A huge "thank you" to the reader who sent me the link.


U.S. oil production has just reached an all-time high. Lesson: who turned out to be right about America’s energy potential—Sarah Palin and “drill, baby, drill,” or the “peak oil” liberals who said endlessly that “we can’t drill our way out” of oil dependency? That one’s so easy even a liberal will have trouble escaping it.


The climatistas are meeting this week in Bonn, Germany, at the annual meeting of the UN climate change circus and freak show. They’re uttering the usual incantations about imminent doom and how the Future Belongs to RenewablesTM, and I hear that a rump group of African nations is demanding that the U.S., which pays 25 percent of the tab for the UN and 20 percent of the tab for the UN’s climate program, be kicked out of the whole thing because of Trump’s decision to leave the
Paris Climate Accord. Oh please don’t throw me into that briar patch!

The largest demand increase [for fossile fuels] will come from developing nations, not the advanced industrialized nations, which are steadily growing more energy efficient. Even oil demand is going to continue to increase, despite all the confident predictions that a Tesla in every garage is just around the corner. 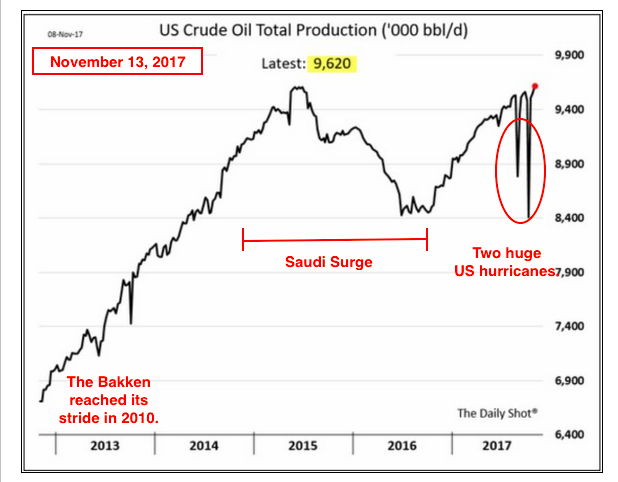 
New England spot electricity price - wholesale - hit $150/Mwh this morning ... quadruple the price in the PJM region. Currently running $100 with the afternoon ramp up in demand just getting underway.

I can only assume faux environmentalists have aggravated the problem by delaying natural gas pipelines; they must prefer burning oil. I wonder why solar / wind can't pick up the slack? For those interested, the link is here: https://www.iso-ne.com/isoexpress/web/charts.

Flashback. GE's purchase of Alstom was hailed as the deal of the century back on December 4, 2015. Fast forward: one more GE debacle. Jim Cramer hailed it as a great deal, now he's 24/7 with his mea culpa. It's my understanding that the current CEO of GE, John Flannery was responsible for the deal. The Peter Principle in effect.

I don't see this often. At least, not often enough.

Of the five issues listed below, I have holdings in three of them. Whoo-hoo. 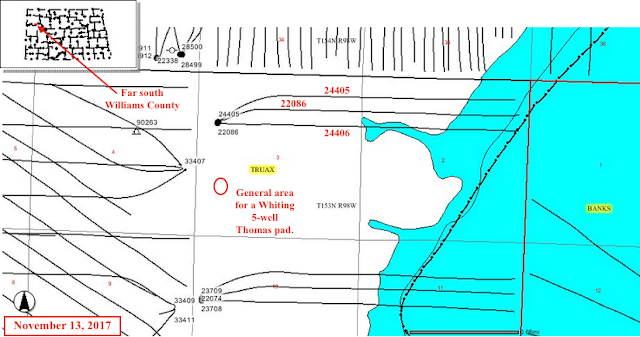 
Enhanced completions continue to push the unconventional oil narrative and its effect on world oil prices. OPEC has underestimated how productive newer well designs can be, and more importantly how quickly improvements can be implemented. Lower oil prices have not been good for US E&Ps, but it could be argued that it has increased the speed at which engineering changes have been made. As marginal producers, US E&Ps will help set the price of oil. More importantly it will have longer term effect on WTI.

IHS Markit recently defined a "Super Hog" as wells completed since January of 2016 with a peak month oil production above 1,600 Bopd. This is impressive, as a 30-day month would equate to 48,000 bbls. Although there are a number of operators on the list, EOG Resources stands out. Concho, Devon, Marathon, Newfield, WPX Energy, Conoco, and Occidental top the list of other E&Ps with a number of Super Hogs.

QEP,  Parsle, and SM Energy have all had a number of good wells in the Midland Basin. Resolute is notable in the Delaware Wolfcamp. Chesapeake has done well in the Eagle Ford. EOG is the only operator with a large number of excellent results across several plays. With 37% of all Super Hog locations, it is far and away the best operator in the US. 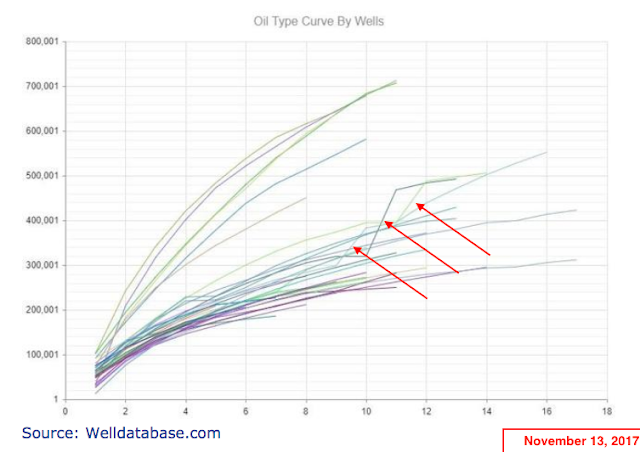 Posted by Bruce Oksol at 1:29 PM No comments:

A couple of days ago I noted an article in which it was reported that the Chinese government had relaxed rules on crude oil imports by the small "teapot" refineries. It turns out that the smaller refiners may not have the resources necessary to be able to import their allowed allotments.


China has raised 2018 crude oil import quotas for independent oil companies by a sharp 63% from 2017 levels, a move that triggered a rally in the Middle East sour crude complex to a three-year high, but traders and analysts said the quotas would still fall short of Chinese independent refiners' requirements.

The country's Ministry of Commerce Wednesday said total crude oil import quotas for independent oil companies in 2018 would be 142.42 million mt (2.86 million b/d), compared with 87.6 million mt (1.76 million b/d) that the government had set for 2017, according to calculations by S&P Global Platts. But actual quotas awarded so far in 2017 stand at 103.52 million mt.

Email ThisBlogThis!Share to TwitterShare to FacebookShare to Pinterest
Labels: China_Oil

I'm preaching to the choir, but even this article amazed me -- and it came from environmental progress.

From environmental progress, German emissions increases in 2016 due to nuclear plant closure. Data points:
Conclusions and another observation:


As such, 2016 is a dramatic illustration of the limits of energy sources that depend on the weather. Their output varies dramatically not just hour-to-hour but also year-to-year.

Anti-nuclear advocates have long insisted that this radical intermittency can be solved through more transmission and storage. But there's a problem: neither more transmission lines nor more storage would have made Germany any sunnier, or windier, in 2016.

HRC reported two nice wells today, but the second one below was spectacular:
Monthly production for #29134:

Note that the completion strategy was not particularly robust, only 33 stages and only 5 million lbs. One might have expected 45 stages and 10 million lbs.

And as good as these wells are, folks are getting a lot better wells than these in the Bakken these days.
Posted by Bruce Oksol at 12:23 PM No comments:

Random Update Of Part Of The Whiting Obrigewitch Area -- November 23, 2017

I track the Whiting Obrigewitch wells in Stark County here.

Current map of part of the Obrigewitch area: 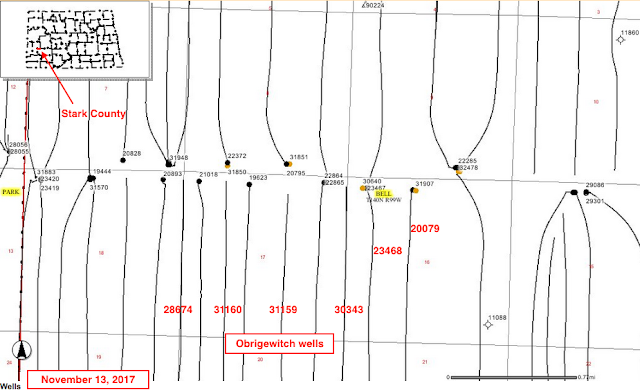 
Since the ban on exports of U.S. crude oil was lifted in December 2015, export volumes have soared, and for the week ending October 27, 2017, they surpassed 2 million barrels/day (MMb/d) for the first time ever, according to Energy Information Administration (EIA) statistics.

And while exports slowed last week, it is clear that there’s more to come. But the pace of export growth depends on many things, including the ability of Gulf Coast infrastructure to receive and store increasing volumes of West Texas Intermediate (WTI),

SCOOP/STACK, Bakken and other crudes and load it onto ships — the bigger the ship the better. Fortunately, coastal Texas and Louisiana already had extensive crude-related infrastructure in place when the export ban ended just under two years ago, and elements of that have been repurposed to handle exports. Will it be enough? Today, we begin a new blog series on existing and planned storage facilities and marine terminals targeted to support rising U.S. crude oil exports.

In response to the 1973-74 oil crisis, the U.S. government in 1975 implemented a ban on the export of most U.S.-sourced crude oil — the only exceptions being oil from Alaska, oil exported to Canada, heavy oil from California and very limited trades with Mexico.

Crude exports already had been minimal (only a few thousand barrels/day, on average) when the ban was put in place — in fact, exports actually rose in the late 1970s as Alaska North Slope (ANS) production kicked in (exports peaked, for the time, at 287 Mb/d in 1980). By the early 2000s, though, ANS was on the decline and crude exports amounted to a drop in the bucket, averaging less than 30 Mb/d. With the Shale Revolution, U.S. production of crude oil (including condensate — the ultra-light crude produced in a number of tight-oil plays) started rising, and by 2014, U.S. producers provided most of U.S. refiners’ need for lighter grades of oil, reducing the need for imported light crude in the process. (The increasing availability of heavy western Canadian crude to U.S. refiners also trimmed the need for overseas imports of heavier crude.) As U.S. production continued to rise, stockpiles of lighter crudes built up and the spread between West Texas Intermediate (WTI; the key benchmark for U.S. light crudes) and international benchmark Brent widened.

Keeping the scam alive. This is the faux environmentalists plan -- "stay the course for three more years; then elect someone who will ban fracking." I am most curious, did The Washington Post article mention that Germany went back to burning brown coal?


The emissions from fossil fuel burning and industrial uses are projected to rise by up to 2 percent in 2017, as well as to rise again in 2018, the scientists told a group of international officials gathered for a United Nations climate conference in Bonn, Germany.

Despite global economic growth, total emissions held level from 2014 to 2016 at about 36 billion tons per year, stoking hope among many climate change advocates that emissions had reached an all-time high point and would subsequently begin to decline. But that was not to be, the new analysis suggests.

So, did they mention that Germany went back to burning brown coal? Nope.

China is the big problem but the "scientists" put the onus on the US. US emissions have declined since 2008; EU emissions started to flatten out a couple of years ago and there is a suggestion that EU emissions are rising slightly.

Did they mention that Germany has gone back to burning brown coal? Oh, I guess I already asked that.

Wow, isn't this coincidental: in The New Yorker this week, "Can carbon-dioxide removal save the planet? CO2 could soon reach levels that, it's widely agreed, will lead to catastrophe."

And it's not even Earth Day.

Fact check. From the article:


This past April, the concentration of carbon dioxide in the atmosphere reached a record four hundred and ten parts per million.

Question: if CO2 reflects heat back towards the earth, why isn't that same CO2 blocking heat from the sun? By the way, I was not the first to ask that question. Scientists are now asking that question. Th "greenhouse" analogy does not work. I digress.

It's all about the money, it's not about saving the planet. From the article:


“If we’re successful at building a business around carbon removal, these are trillion-dollar markets,” Corless told me.

Of everything I've read about the Manhattan Project (and I've read a lot about that project), I never got the feeling that it had anything to do with anyone making money. It was about a project that, at that time, was viewed as important as "saving the planet" is viewed today.

For investors, it's an open-book test. 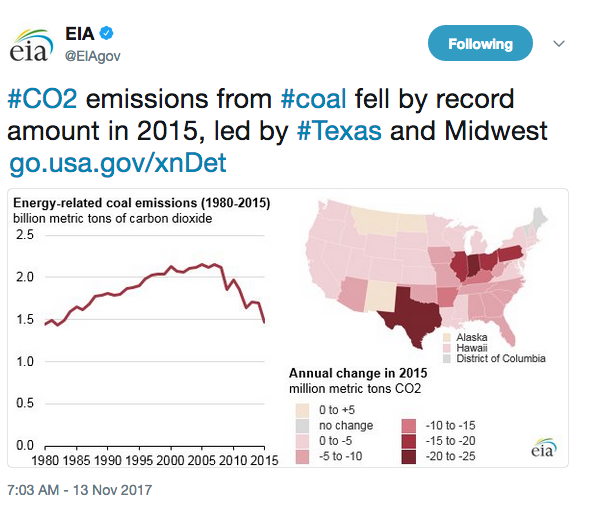 How Dallas did against one of the worst teams in the NFL.

I assume the New England Patriots won again, with or without deflated balls.
Posted by Bruce Oksol at 6:27 AM No comments: