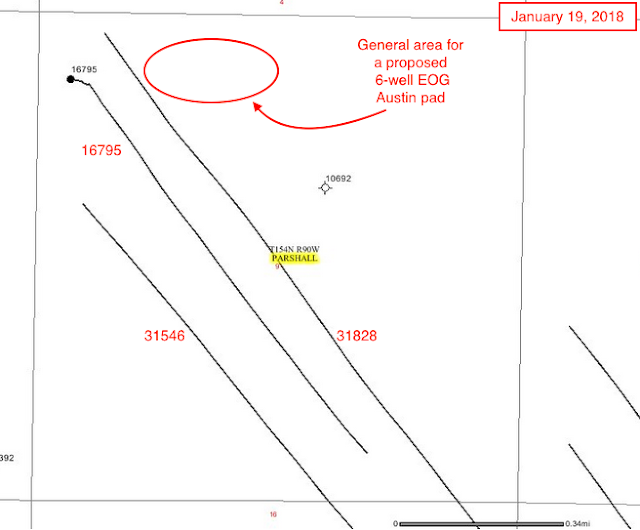 Refresh your memory regarding this story at this post.


The vessel named Gaselys was set to land at a terminal outside Boston on Saturday and changed its course to delay the date of its arrival, according Engie SA, the French utility that owns the cargo.

The ship turned east last night and listed its destination as Algeciras near Gibraltar, and that entry still remains on a ship-tracking database compiled by Bloomberg.

“The final destination of the cargo did not change,” Damien de Gaulejac, a spokesman for Engie, said by email. “It is still Everett, but the date of delivery has been adjusted, in particular for weather reasons.”

The route seems a bit convoluted. This graphic helps explain it: 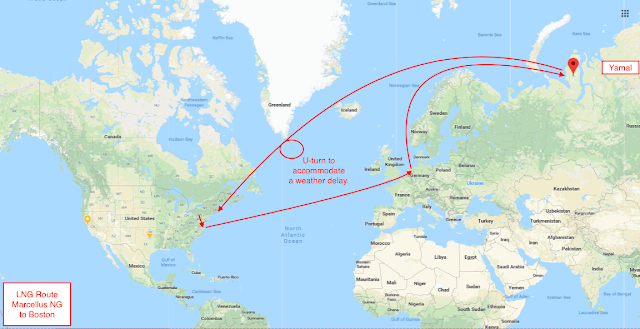 Disclaimer: The article refers to a "u-turn" -- obviously the tanker did not make a "u-turn"; it made a full 360-degree turn to get back on course back to the US. The route shown is for demonstration purposes only. The exact location of the "turn" and the exact route could be significantly different. If this is important to you, go to the source.

Don alerted me to the article. My reply:

I find this whole thing ridiculous.

Sanctions against our "arch" enemy and we import their natural gas even though we have such a glut of natural gas, we are exporting it.

For all one knows, natural gas being fungible (a commodity), that LNG in the Russian tanker originated in the US.

Even if it "technically" did not originate in the US, for all "practical reasons" it did. So instead of a short pipeline from the natural gas fields in the Marcellus, Boston is getting their natural gas via this route:

Putin, the Russians, and the French must all be laughing all the way to the bank.

Sanctions? What sanctions?
Posted by Bruce Oksol at 2:52 PM No comments:

The Energy And Market Page, T+363 -- Late Afternoon, The Market Turns Positive; Wow, Look What The US Tax Code Did For Canadian Pacific

Dow: after being minimally negative all day -- down about 50 points -- the Dow has now (2:22 p.m. CT) turned positive. Interesting.

Canadian CBR: only a few days ago, January 8, 2018, to be exact, we posted that Canadian CBR is alive and well. Did 4Q17 Canadian Pacific earnings bear that out? You be the judge. From Motley Fool, Canadian Pacific Railway nets a big one-time gain in the fourth quarter.


Earnings for the fourth quarter of 2017 were monstrous, jumping 159% compared to this time last year. For anyone that follows the railroad business at all, that should sound a little suspicious. Sure, railroad companies can be excellent wealth building machines, but doubling earnings in a year is extremely rare.

So let's dig into Canadian Pacific's bottom line this past quarter to see what was up and what management expects for the rest of 2018.

Whenever a number jumps out like Canadian Pacific's net income for the quarter, you have to see what is behind it. According to management, net income benefited from an income tax recovery of 527 million Canadian dollars related to changes to the U.S. tax code. Canadian Pacific brought forward several hundred million in deferred tax assets, which was the reason for the sweeping gain. If we were to adjust earnings for this one-time benefit, earnings per share would have been CA$3.22.

The numbers:
Shares of CP are up significantly today on a down day for the market.

Memo to CP: send a "thank you" letter to President Trump. Send a "hey, what are you doing for Canada?" note to Mr Trudeau.

So back to the numbers:
Yes, I would say that Canadian CBR is doing just fine.

The change in the price of CP shares today seem to reflect the 19% (real) improvement and not the one-time gain.
Posted by Bruce Oksol at 2:39 PM No comments:

Natural gas. And here it is -- something I posted a few days ago, and to the best of my knowledge, the first to post the story -- North Dakota natural gas production reaches all-time high.

Water: growth in oil patch drives water sales for the Western Area Water Supply Authority -- sales are still far below their record highs in 2014, but sales are turning around.

I haven't visited Mark Perry's website in a long time (my bad). Don alerted me to one of Mark's recent postings. 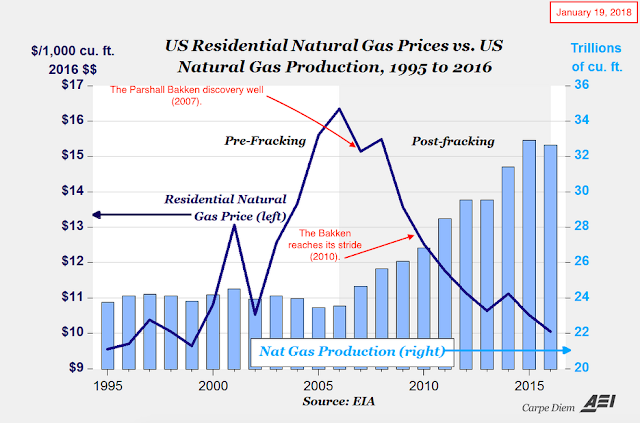 I'm glad you asked. A google search, of over 4 million returns, two of the top three hits, plus a twitter hit (yes, I know): 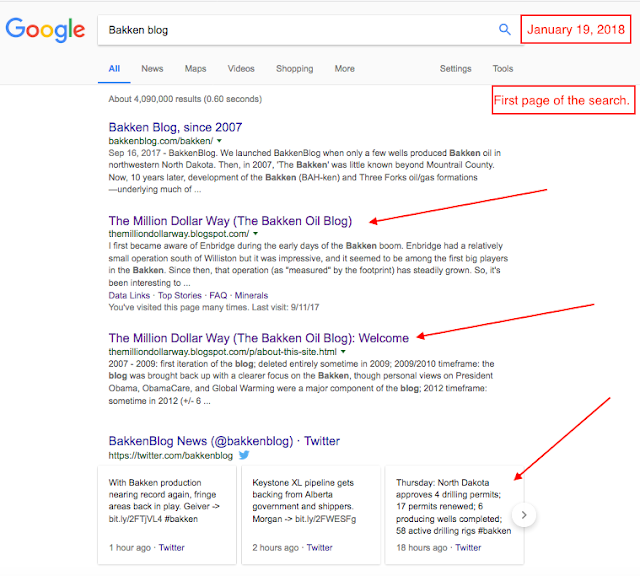 
The study accounts for the coming closure of fossil fuel-fired and nuclear power plants and the expected addition of more renewable energy to the grid. But George says they did not assume any new natural gas pipelines would be built by the year in question.

"We thought, it doesn't make sense for us to necessarily include anything because we don't really see any activity on that front right now,” she says.

ISO New England: spot prices to $250/MWh continue despite a warming trend. But note that almost all electricity being generated is coming from nuclear plants (to be closed; see previous story above); and, natural gas. Coal is maxed out (and will be less in the future (based on story above). Renewables, solar and wind are contributing about 4% to the overall electricity mix. Wow.

The Obama rally was better and bigger than the Trump rally. Really? Maybe, maybe not. I don't know. It depends from where you begin your  measurements, to where you end your measurements. Trump's first year rally began on November 9, 2017. Trump's rally came after an incredible previous year on the stock market (as Obama folks will tell you). Obama's first year rally came after the greatest recession in modern US history. Comparing first year rallies in this case is comparing apples to oranges.

Yesterday there was a WSJ story about the irritations/frustrations Whole Foods customers are expressing with the availability of fresh produce in their stores, now that Amazon has taken over, and has instituted new "time-to-shelf" deliveries or whatever it was called.

On the way home from an early morning school function today, I passed our local Whole Foods store. I was curious. Observations:


RBN Energy: a look at peak oil demand and factors affecting long-range oil prices.
Posted by Bruce Oksol at 10:05 AM No comments:

I would have bet my entire holdings in **** that the government would shutdown over the weekend. Boy, was I wrong.

I was so sure of that I had no plans to watch CNBC all day (I have not yet turned on the television set and now that I am over at Sophia's house getting ready to take granddaughters to school, I won't; they are cord cutters and don't have network television).

But driving over, on the local radio station I hear a temporary budget bill was passed. It will expire in four weeks.

My only comment: Chuck Schumer is no Harry Reid. Reid would have shut down the government.

That makes the poll at the sidebar at the right regarding a possible shutdown moot, so it will be removed, and votes won't be recorded here.

A minute later: now I'm checking the internet. I don't see any headline anywhere that says the Senate passed the bill. I'm wondering if local talk radio got this one wrong. They said "Congress passed the bill to avert the shutdown" but the headlines have not changed overnight. I think local talk radio got it wrong. But right now, we are still where we were when I went to bed last night. Interesting. And, if the government does shut down, I will have to put the poll back up. LOL.

By the way, Dow futures are up slightly. "Everyone" says that if the government does shutdown, it will not affect the market. I disagree. The market is driven by fear and greed. And a government shutdown leads to uncertainty which leads to fear.

But Dow futures are slightly positive suggesting:
For the record, I disagree. I do think the talk of a government shutdown will "bother" the market. Again, those not paying attention will fail to take advantage of the buying opportunity.

Full list of how military pay and benefits would be affected with a government shutdown at this link.