Most recent EIA data, in thousands of bopd, how much Saudi Arabian oil is imported into the US. The most recent data is from September, 2015. It's been this low before, but not often:

Total imports haven't changed a whole lot. It looks like Kuwait, Iraq, and west Africa are making up the difference, at least for this most recent reporting period. Remember, Saudi Arabia has a huge refinery along the US Gulf coast.

This was totally unexpected. US gasoline demand has fallen below what it was one year ago: 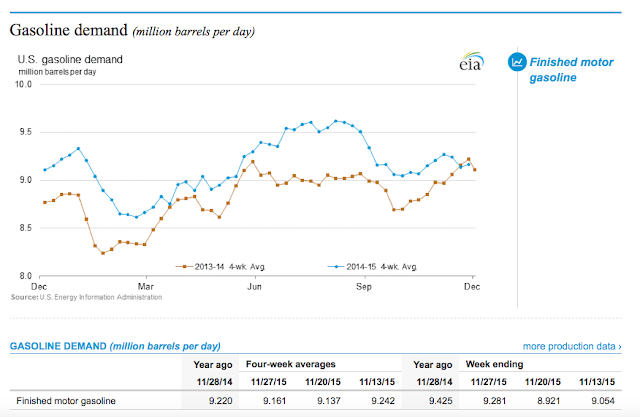 Pretty soon, gas stations are going to have to reintroduce S&H green stamps. I grew up with those stamps.
Posted by Bruce Oksol at 10:54 PM No comments:


"If we are victorious in one more battle with the Romans, we shall be utterly ruined," King Pyrrhus of Epirus complained after winning exceptionally bloody engagements in 280 and 279 BC.

Pyrrhus lost many of his men, most of his generals and had no reserves left, while "the army of the Romans, as if from a fountain gushing forth indoors, was easily and speedily filled up again" according to Plutarch.

The king of Epirus, reported to have been a brilliant general, has come to symbolise victories that are so expensive they leave the victor dangerously weakened.

Pyrrhus won the battle but lost the war.

As ministers from the Organization of the Petroleum Exporting Countries meet in Vienna, some may wonder if the strategy of maintaining output to defend market share risks securing a Pyrrhic victory.

OPEC has put shale producers on the defensive and forced the cancellation of many ambitious oil projects with its strategy of going for volume over price.

But members are gradually running out of money and the shale industry is waiting for any upturn in prices to start ramping up production again.

From SayAnythingBlog: Oil Slow Down May Not Be Hurting North Dakota Employment As Much As You Think.


The future is always uncertain, but it seems that labor markets in the core Bakken counties could be having their Mark Twain moment: “The report of my death was an exaggeration.”

My central argument here is not that the markets are not correcting, and I am not suggesting declines in employment will not happen, though the extent of that decide is obviously debatable. At some level, you might expect people to welcome the pause in the employment growth occurring now. It could reduce pressures in the other related areas such as housing.

Regardless of any decline, the data show that employment is still more than twice the level from just 5 years ago.

I suppose this is true across the US. I don't know. But here in Texas, "they" really love their sports. By middle school everyone must go out for a sport. If one is not 6'7" (no basketball) or 350 lbs (no football), the most common option is long distance track or long distance running. It really is quite amazing.

Our oldest granddaughter, 7th grade, is part of her middle school's long distance track team, which appears to be every middle school student who is not playing football or basketball. Today was another track meet. I did not plan on going but I did look forward to picking her up at the scheduled time of 6:00 p.m. I went early just in case she finished early because later she would have two hours of water polo practice (which does not count as one of the district sports). I got there at 5:00 p.m. and was overwhelmed by the number of students there, It appears there were three or four schools represented.

In her long distance heat, 400 girls were entered into the long distance "race." Four hundred girls. Wow. She came in 20th. When I saw her ribbon for coming in 20th, I was not particularly impressed until I learned there were 400 girls competing. Wow. The neatest thing were the number of parents there and they were not simply sitting in the grandstands. They were actively walking among the students, urging them on and congratulating them as they came across the finish line.

Our granddaughter's event was over; she was getting her "stuff" so I could take her home. But all that was interrupted when the stood at the top of the grandstand, swung her right arm, and yelled to her male colleagues, encouraging them to run faster. She was really into this, and judging by the smiles on everyone's faces, they were all having a great time.
Posted by Bruce Oksol at 8:52 PM No comments:


WTI crude oil settled below $40/bbl for the first time in more than three months, tumbling 4.6% to $39.94 as U.S. government data showed a 10th straight weekly increase in crude supplies.

The dollar's surge to 12-year highs after pro-rate hike comments by Janet Yellen also weighed on oil and other dollar-denominated commodities.

The Bismarck Tribune is reporting a 150-MW wind farm will be built north of Tioga.


Located 4 miles north of Tioga, up to 75 wind turbines are planned to be constructed within a 13,000-acre project area. Kalk said the wind turbines used will range from 2 megawatts to 3.3 megawatts.

This pretty much limits city growth to the north. But that's fine: there must be 20 miles to the east and west to develop.


U. S. healthcare spending grew 5.3% last year to $3 trillion, another sign that a historic slowdown in medical inflation may be ending.

The massive expansion of insurance coverage under the health law and rapid growth in specialty drug spending fueled the uptick in medical costs, officials said. Annual spending growth was 3.7%, on average, during the last five years.

What did one expect? Under ObamaCare, there are no limits on coverage.


The country spent $9,523 per person on healthcare in 2014, including Medicare, Medicaid and private health insurance. That's far higher than what other developed countries pay, and healthcare spending now accounts for 17.5% of the U.S. economy.

Experts aren't predicting a return to double-digit increases in medical spending. But the latest trend underscores how difficult it will be for policymakers, employers and insurers to control healthcare costs going forward. [And that's why UnitedHealth Group is getting out of ObamaCare. Others will follow.]

When the bill was signed, VP Joe Biden said healthcare accounts for 1/6th of the US economy, or 16.7%, so we're still in the same ballpark.


The new vehicle is equipped with a 9-inch touchscreen in the center console, with the CarPlay interface featured on the bottom half of the screen. Volvo's Sensus Connect controls remain at the top of the screen, offering access to features like directions, media playing, temperature, and more.


Most carmakers in the U.S. are now clearing out 2015 models to make way for new 2016 vehicles, a growing number of which feature CarPlay for the first time since Apple introduced the software platform at WWDC in 2013.

Posted by Bruce Oksol at 2:34 PM No comments:


Much of the nation is paying $2 or less for a gallon of regular gasoline for the first time since spring 2009.

But in California, drivers are shelling out significantly more — and the price gap has gotten wider in recent weeks.

The Los Angeles area has been hit particularly hard.

L.A. motorists are paying an average price that is 75 cents a gallon more than the national average, compared with a 30-cent difference a year earlier. Fuel experts attribute the increased disparity largely to refinery outages.

California gasoline typically costs more than in the rest of the country because of higher taxes and fees as well as a unique state-mandated blend that produces less pollution. But this year the gap has widened into more of a gulf.

Some California service stations are selling gas for more than twice the national average price, which was $2.038 a gallon Tuesday, according to AAA's daily price survey. For instance, the Shell gas station at Olympic Boulevard and Fairfax Avenue in Los Angeles had regular gas as high as $4.50 a gallon in recent days.

We drive right by that service station every time we drive to Farmer's Market, about a mile farther north. A lot of great memories.
Posted by Bruce Oksol at 9:47 AM No comments:


The GDPNow model forecast for real GDP growth (seasonally adjusted annual rate) in the fourth quarter of 2015 is 1.4 percent on December 1, down from 1.8 percent on November 25.

The decline occurred this morning after the Manufacturing ISM Report On Business from the Institute of Supply Management and the construction spending release from the U.S. Census Bureau.


The 20 Mb/d Dakota Prairie refinery commenced operation on May 4, 2015 – becoming the first brand new U.S. crude processing plant to startup in nearly 40 years. The rationale behind this refinery and plans for others like it was surging demand for diesel driven by the shale oil boom in North Dakota. However the market conditions that prompted interest in building refineries in the Bakken region have changed considerably in the past year and led to an unprofitable first quarter for Dakota Prairie. Today we explain why the new refinery made sense at one time and what has changed in the past year.

Despite the oil price crash last year (2014) and consequent fall off in drilling - North Dakota is still producing over 1.1 MMb/d of crude as of September (according to the North Dakota Industrial Commission – NDIC) – the vast majority of which (all but about 100 Mb/d) leaves the State for Midcontinent or Coastal refineries by rail or pipeline. Up until May 2015 the only refinery operating in North Dakota was the Tesoro Mandan facility that processes about 70 Mb/d of crude. As we have previously described - the lack of local refining capacity in a state sitting on top of bounteous crude supplies as well as the prospect of high margins - attracted the attention of several companies looking to build new refineries. We first covered the topic back in April 2013 when plans for three new refineries were getting off the ground.

A year later in June 2014, at least 5 companies were planning to build “micro” refineries that hoped to process 20 Mb/d of crude each. Since then the first of those refineries – the Dakota Prairie facility owned by a joint venture between MDU Resources Group and Calumet Specialty Products – has come online (on May 4, 2015) and is processing about 19 Mb/d of Bakken crude (operating at 95% of capacity). The Dakota Prairie refinery is the first Greenfield (built from new) refinery constructed in the U.S. since 1976. However - as we shall see – changing demand for diesel fuel in North Dakota and a reduction in the price advantage for Bakken crude made the new refinery’s first quarter unprofitable and appears to have chilled progress on the other projects.


Oil service company Schlumberger announced another round of job cuts on Tuesday, adding to 20,000 already this year, as low oil prices and a slowdown in drilling was expected to continue into next year.

The layoffs, which will incur a pretax restructuring charge of about $350 million in the fourth quarter, are the latest sign of continued pain in the oil industry as oversupply continues to weigh on prices and cut profits for even the largest companies.

The size, location and timing of the cuts were unclear.

Posted by Bruce Oksol at 5:55 AM No comments: