An old singleton:
Other wells in the same area tracked here.
Posted by Bruce Oksol at 9:27 PM No comments:

For inexplicable reasons -- oh, no, I get it -- the Democratic mantra -- if it moves, tax it -- Oregon appears ready to put a $15 tax on all adult bicycles. What are the state pols smoking? Oh, that's right; mary jane. This is the first bicycle-specific tax in the nation.


The Canadian natural gas industry shouldn’t blame environmentalists, First Nation communities or the government for its failure to get LNG export infrastructure built. It should blame itself.

Businesses can’t rely on the government to push projects past the objections of local communities, said the 63-year-old Carlson in a wide-ranging interview with Bloomberg News. Instead, governments should provide a final examination of operations that have already been mostly agreed on. That philosophy helped Seven Generations build its Kakwa River Project in northwest Alberta, he said. It has also helped the company’s shares outperform its peers.

“A pipeline to the Pacific and an LNG project on the Pacific, where the people along the route are involved -- they’re owners, they’re builders -- I don’t know that that’s been put forward,” Carlson said. “Maybe it has and I just don’t know about it, but I suspect it hasn’t, and I suspect there’s an opportunity there.”

For those who cannot read between the lines, Pat is simply stating the obvious: the Canadian national government failed to pay the "necessary bribes" that the First Nation communities and faux environmentalists demanded for the natural gas pipelines. This is not rocket science.

If you drive a Tesla in Wisconsin, you're driving on coal power. 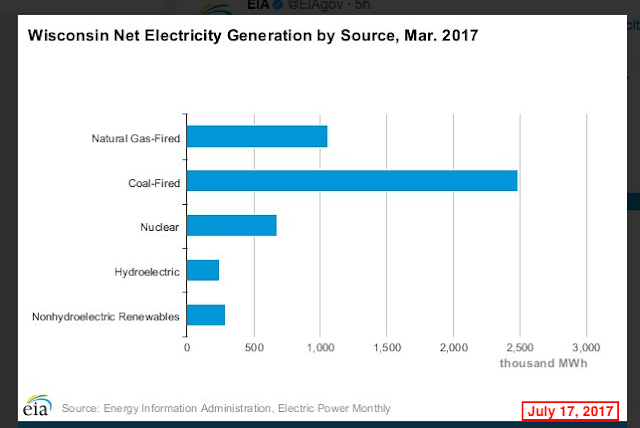 Posted by Bruce Oksol at 6:23 PM No comments:

Someone knows:
Disclaimer: this is not an investment site. Do not make any financial, investment, travel, job, or relationship changes or decisions based on what you read here or what you think you may have read here.

By the way, on the "next big thing" thread, I mentioned "grocery products" on February 9, 2017, just months before Amazon got into grocery. My post on grocery back in February:

This only caught my attention because I thought China's 2Q17 grew faster than forecast. The New York Times story and lede:

So, how was it that China's 2Q17 grew faster than forecast? The NYT never mentioned that one way or the other.

Reuters, on the other hand did provide the whole story, but one has to admit that the headline was a bit hyped. There's not a lot of difference between 6.9% and 6.8% when it comes to forecast. 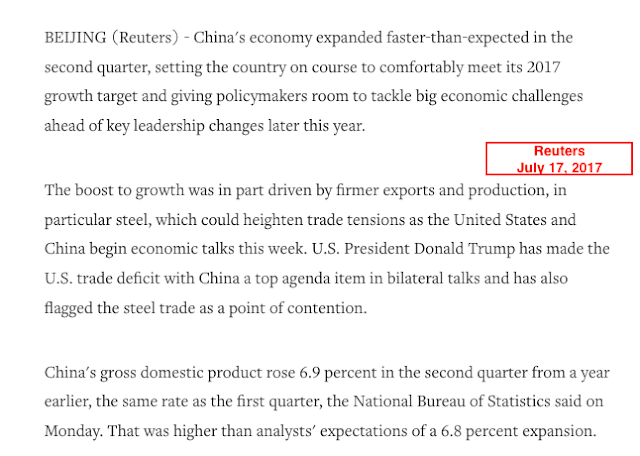 When I was growing up in Williston in the 1960s, it was my perception (right, wrong, indifferent) that "aluminum siding" was the newest fad. I don't know how that all worked out but it sure seemed like there was a lot of hype about aluminum siding at the time.

I say all that because it reminds me of the residential-solar-roof industry today. Take a look at Hawaii. From greentechmedia.com:


For anyone in sales, there are two existential questions that need to be posed and answered: What's the market for what you're peddling, and how much market share can you expect to capture?

As the once-thriving rooftop solar industry in Hawaii painfully contracts, businesses like mine and others are being forced to seriously ponder those two questions.

In a state where there's by far more installed solar capacity per home and business than any other place in the nation, and still a high dependency on imported fossil fuels, how can it be that our solar coaster is slowing to a crippling crawl?

In a state that's pledged itself to 100 percent renewable in power generation by 2045, the first in the country to make such a commitment, how can it be that the bottom is dropping out of the rooftop solar market?

There is strong consensus among Hawaii energy stakeholders that bringing considerably more rooftop solar PV on-line is a good thing and a high priority. But with this year on pace to see the lowest numbers since 2010, we in the industry are wondering whether what we're experiencing now is the new normal, as major players disappear completely or see their PV sales revenues drop by as much as 80 to 90 percent.

Wow, if residential rooftop solar energy can't make it in Hawaii where utility costs are very, very high and there is an immense amount of sunshine year around, how will the rest of the world make out with solar energy?

Years ago, I posted an article about the fact that rooftop solar energy never pays for itself, or if it does, it takes up to 20 years, or something to that effect. There's a huge up-front cost of installing solar panels and one still has monthly utility bills. My hunch is that many homeowners who were early adopters are telling their neighbors that if they had to do it all over again, they would not install rooftop solar panels.

Batteries are getting better, but they add significantly to the cost of solar energy. And like any battery, I assume they degrade over time, needing replacement.


Blue Hawaii, Elvis Presley
Posted by Bruce Oksol at 9:36 AM No comments:

The Road To Minnesota

There is a tag "Road_To_Minnesota" but it's becoming a bit unwieldy having to run through all the posts to track that issue.

I will still have stand-alone posts on Minnesota's energy plans but will track them here (if I don't forget) similar to the way I track other on-going stories.

Today's story: journalists in Minnesota really, really excited about Connexus' plant to embark upon a solar-plus-storage project, that when completed, will be the largest in the Midwest. It could be as large as 40 MW -- wow, 40 MW. Connexus is the state's largest electric cooperative. I sure hope the members of the co-op are watching how much they are going to pay for this science project. I think they are going to be sorely disappointed but at least they will go to bed at night feeling good that they are doing their tiny bit to make Algore happy. [Update: one day later -- when trying to find the cost of this solar-storage project, I noted that I made a mistake. This is not a 40-WM project. It's a 20 MW, 40MWh project. It's very, very subtle.]

A few days ago a reader sent me a story regarding his family's mineral rights. Despite owning very few acres and a net ownership rate of 0.6%, his family has earned in excess of $2.4 million since the Bakken boom. It was quite a story. The reader sent it in to me in response to an earlier post on royalties in unconventional shale.

Today, of all things, Bloomberg via Rigzone has a feature story on the same subject. The article begins:


Bob Ravnaas raised a paddle in a Houston auction house to secure his first block of mineral rights 19 years ago, when oil prices were swooning below $20 a barrel.

A generation later, that same West Texas oilfield is still spinning off royalties, part of a mineral-rights empire amassed by Ravnaas that stretches across 20 states and delivers millions of dollars in cash payments. Kimbell Royalty Partners LP, where the former petroleum engineer is now chief executive officer, has stakes in 48,000 oil and natural-gas wells in some of the hottest U.S. shale patches. These days, it’s not alone.

America’s drilling boom is making a hot commodity out of one of the stodgiest of oilfield assets, the monthly royalty check. Lured by the promise of steady returns without the cost of actually operating wells, companies like Kimbell are racing to acquire rights around the U.S. Private-equity giants including EnCap Investments LP and Blackstone Group LP are getting into the game as well, pouring billions into the market.

“It’s become a very attractive investment," said Ravnaas, whose Fort Worth, Texas, company went public in February with a $90 million offering. “Oil and gas production has increased dramatically in the last ten years, and the size of the royalty market is increasing exponentially along with it."

Drillers have negotiated with landowners for decades to tap the reserves below their acreage. But mineral rights have taken on new value as advanced drilling techniques sparked a renaissance in oilfields across the U.S. The rights guarantee holders an upfront bonus when an operator decides to drill and a cut of revenues for each barrel sold thereafter.

So much more at the link.
Posted by Bruce Oksol at 8:32 AM No comments:


Permian natural gas production is up nearly 40% over the past three years to 6.3 billion cubic feet/day (Bcf/d), and production could almost double to 12 Bcf/d by 2022. While there is 10.8 Bcf/d of existing gas takeaway capacity out of the Permian — suggesting that takeaway constraints are not imminent — much of the capacity to Mexico is not currently usable because of delays in related power-generation and pipeline projects south of the border.

There also are limits to how much of the gas pipeline capacity from the Permian to California can be used for Permian takeaway, particularly during the off-season, when California can serve much of its incremental power load from hydro, solar and wind.

The Midcontinent (Midcon) and Upper Midwest can only take so much Permian natural gas too; they’re taking gas from almost every direction. Put simply, takeaway constraints out of the Permian may be much closer than they appear. Today we consider existing natural gas takeaway capacity out of the Permian, how it compares with current and projected gas production in the region, and the potential for — and timing of — constraints that could reduce the prices that Permian producers receive for their gas.


A Japanese group’s plans to explore for Russian oil with state-run Rosneft have been stymied by U.S. intervention over sanctions, according to people familiar with the matter.

Washington’s objection to the Japanese project to explore for oil in the ocean off Russia’s Far East shows the U.S. Treasury is maintaining a firm line on sanctions, even as some international companies press on with Russian energy deals. In April, the U.S. turned down a request from Exxon Mobil Corp. for a waiver to allow it to drill with Rosneft in the Black Sea.

Rosneft signed a preliminary deal with a Japanese consortium of Japan Oil, Gas & Metals National Corp., known as Jogmec, Inpex Corp., and Marubeni Corp. for offshore exploration at a license to the south west of Sakhalin Island in December, one of more than 60 agreements and memorandums signed during Russian President Vladimir Putin’s visit to Japan.

However, since then the U.S. government has objected to the project, according to two people familiar with the discussions who asked not to be identified discussing a sensitive matter.

A screenshot of the general view of the area under discussion: 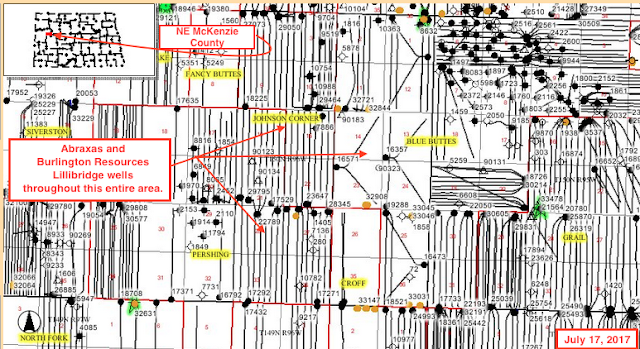