Earlier today I wrote the following about CLR's for 60 wells in the Long Creek Unit:


This is a huge story on so many levels.

I think it's important to connect these dots:


So, now today, we see XTO with ten new permits for their HBU Muller project.

I assume XTO will accomplish the HBU Muller project with a single rig.

By the way, with regard to the CLR Long Creek Unit project, I think there's more to the story. Another natural gas processing plant perhaps? See this note from November 18, 2013.

Natural gas processing plants in North Dakota are tracked here. I'm not aware of natural gas processing plant in this immediate area. There are two such plants on the far west side of Williston, but not "good" for the LCU. Knowing Harold Harmm, I wouldn't be a bit surprised to see some "spin-offs" from this story. I'm sure there's a pipeline story somewhere in there, also. A reader tells me to think big: a plastics plant? Right on the water? A small mall with commissary, truck wash, clothing store, bar, restaurant, did I mention a bar? This area will employ a lot of folks, drilling and then servicing 56 wells in a 10-square mile area. I could be wrong but I think the Scottish-like links course is also out this way. I'll post a map later. For now, I get to pick up Sophia from TutorTime. [The Links of North Dakota is sited on the north side of the river, somewhat midway, as the bald eagle flies, between Hofflund oil field and Long Creek oil field, both sites of major "unit" development projects.]

The CLR LCU is tracked here.
Posted by Bruce Oksol at 4:44 PM No comments:

Now, why would I mention that?

Although she grew up in Minneapolis, MN, she was born in ... Valley City, ND.

Comment: so there. Put that in your pipe and smoke it.

I can't make this up: Saudi Aramco will launch its IPO, go public, list. Apparently they announced that over the weekend. One small catch: only one shareholder: the company itself. No link. I'm sure you can find the story if you want. I can hardly wait for the 3Q19 earnings conference call "Q&A"  -- the one shareholder present will be the only one allowed to ask questions. Analysts will be told to pound sand. LOL.
Posted by Bruce Oksol at 4:14 PM No comments:

Memo to Mark: ditch the "all caps." Very amateurish.

From RBN Energy, December 15, 2019 -- the story of Gardendale, TX, and the Cactus pipeline. Also, here. for an update on Cactus II.

Link here. This is quite a list. I had forgotten so many of them.

It will be interesting to see if we ever get the name, his "docs," and his testimony of the "temporary" guard -- not part of the prison union -- who was put in charge of watching Epstein just an hour before he died.

The coroner "completed" his autopsy but "needs more time" to "determine" cause of death.  One of two things going on here, and one of them is not good. LOL.

By the way, this reminds me of the fight scene in which George Clooney is "beaten up" in the "Ocean's Eleven" movie. Life imitating art.

I saw The Caine Mutiny (1954) last night on TCM. It was the first time I had ever seen it. I never realized it was so incredibly good, so well cast. Some disappointments with the movie, of course.

August 13, 2019: a reader responded to my rambling note below. The reader brought up some incredibly important notes, some points that I had forgotten, and thoughts on the Rystad analysis.  Most important:
Here is the reader's remarks:

I wanted to comment on your latest post on Permian and Bakken EURs - in my opinion one needs to have more context before making any assumptions from those graphics:

2) The Rystads type curve graphic looks extremely misleading. This is a very misleading graphic for attempting to prove Permian shale wells aren't meeting expectations - where did these expectations originate to begin with ?

Type curves in tight oil are driven by spacing so without knowing the spacing assumption behind the Rystad Type Curves, there is no way to find this credible.

Permian operators are still experimenting with spacing and this latest "Dominator Project" from Concho was a spacing experiment that didn't pass the economic test. They were testing the upper bounds of spacing and it didn't work out but from what I've seen, they in no way were claiming this spacing was verified as optimal or a base assumption for their acreage

This will be re-posted later as a stand-alone post. It's that important.

I never tire of comparing the big three, the EIA dashboards:
Lynn Helms once said that going head-to-head, mano-a-mano, Three Forks wells might be better than Bakken wells.

I don't know the Permian well enough to really say, but based on very limited data, it certainly appears that going head-to-head, mano-a-mano, the better Bakken/Three Forks wells might be better than Permian wells; and, taken as a whole, the Bakken might be better on a "per acre" basis if that makes sense. I don't know. Just idle rambling.

What got me to thinking about this (again), were these graphics over at #OOTT this morning: 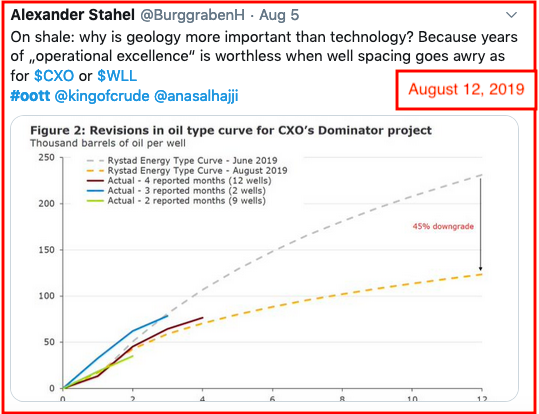 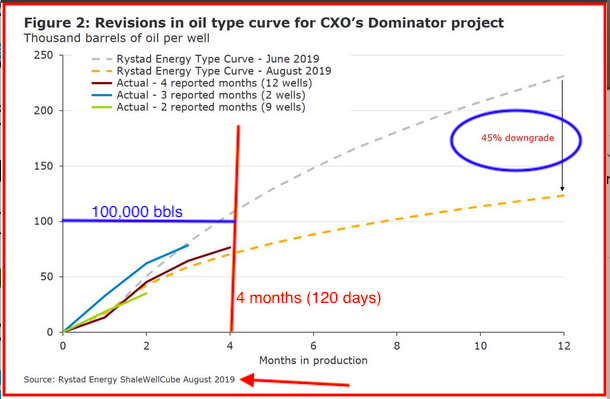 The graphs above are for CXO in the Permian.

I am not aware of having seen similar graphs in the Bakken.

On the contrary, it seems that "EUR type curves" in the Bakken show/showed better production with current spacing. Spacing does appear to vary across the Bakken which, of course, makes sense. Those who have followed the Bakken from the very beginning are very aware how the EUR type curves have changed over time. An excellent example of a Bakken EUR type curve from November, 2016: 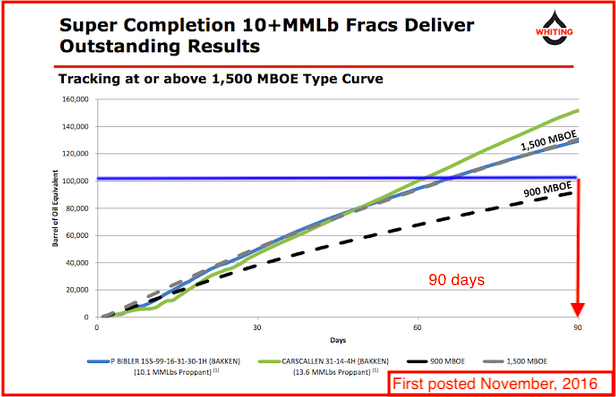 Clearly, in the better Bakken, operators are "demanding" 100K wells in the first top three months of production.

I think it's important to connect these dots:
Even though the "Long Creek Unit" does not fit the criteria for "deals in the Bakken" which are tracked at the sidebar at the right, I have linked that unit in that location. There will be many notes on this project over the new couple of years, but this post will be where the project is tracked.


Little Honda, The Hondells
Posted by Bruce Oksol at 9:39 AM No comments:

Last week the wind energy story was the National Grid failure in London, affecting one million folks, due to offshore wind farm failure.

From big to small. Today's story: a single turbine.


455 Rocket, Kathy Mattea
It seems this would be a great cover for Joan Jett and the Blackhearts.
Posted by Bruce Oksol at 7:55 AM No comments:


For a few days in late July, the price differential between propane stored at Enterprise Products Partners’ salt caverns in Mont Belvieu, TX, and propane stored at facilities owned by others a few hundred yards away quickly widened to as much as 10 cents/gallon. That’s by far the biggest spread of its type we can recall, and while we can’t say for certain what caused the “Enterprise-vs.-others” propane differential to blow out, there’s a likely — and familiar — culprit: NGL infrastructure constraints.

Something else this unusual pricing event confirmed is that, no matter where the NGL storage, fractionation or pipeline constraint may occur, it almost always has an outsized effect on the much smaller NGL storage and fractionation hub in Conway, KS. What’s with that? Today, we look at the recent, rapid slide in propane prices at Enterprise’s Mont Belvieu storage facility and discuss what it tells us.