For the past year, talking heads have suggested AAPL with a P/E running between 33 and 37 was "too expensive." Today, after AAPL closed above $151, the P/E was said to be below 30.

Quick! Name The Fastest-Growing County In The Entire United States This Past Decade -- August 16, 2021

The oil boom over the past decade, which made America the world’s top crude oil producer, made a small rural county in [western] North Dakota the fastest-growing county in population between 2010 and 2020, U.S. Census Bureau data showed.

North Dakota’s McKenzie County was the fastest-growing county in America in the past decade, according to the decennial U.S. census.

The Bakken boom, which began early in the 2010s, contributed a lot to the fastest-growing county in America. [2000 in Montana, 2007 in North Dakota.]

The number of residents in McKenzie County more than doubled over the past decade, jumping from 6,360 residents in 2010 to 14,704 residents 2020, according to the U.S. census.

The growth was “whopping,” Census Bureau demographer Marc Perry said during a press conference, as quoted by the AP.

Williams County, also in North Dakota, registered an 83-percent surge in the number of its residents over the past decade, to 40,950 people in 2020.

Posted by Bruce Oksol at 7:04 PM No comments: 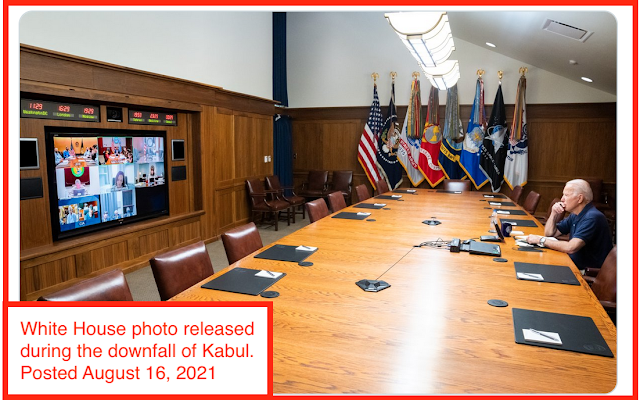 There was a lot of talk today regarding that photo.

But no one connected the dots.

Whenever there's a crisis for the US president, who does he (we've never had a "she") call for outside advice?

Later: the point of all this. The Taliban began their final assault at the very time the Biden presidency was pre-occupied with the Obama birthday bash planning and celebration. The Taliban has learned a lot fighting the Americans for twenty years.

Can you imagine Churchill throwing a birthday bash for himself on the eve of D-Day?

Active rigs as reported by the NDIC: 20

One permit was renewed:

Dow and S&P 500 both closed at new all-time highs, and it wasn't even close -- the numbers were incredible when one looks at all the headwinds.

The NASDAQ reversed direction in late trading and came close to erasing its opening losses, closing down only 29 points.

The only graph that really interests me for the moment: 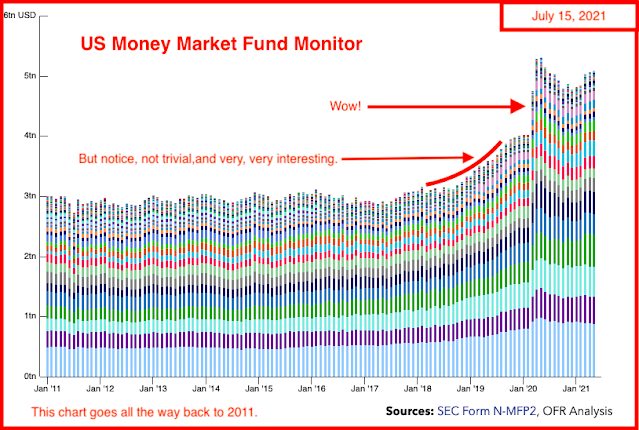 CDC data. The numbers have been posted, and they are very good numbers. Close to 900,000 vaccinations given on a Sunday.

The Louisiana experience corroborates what I said from the beginning. 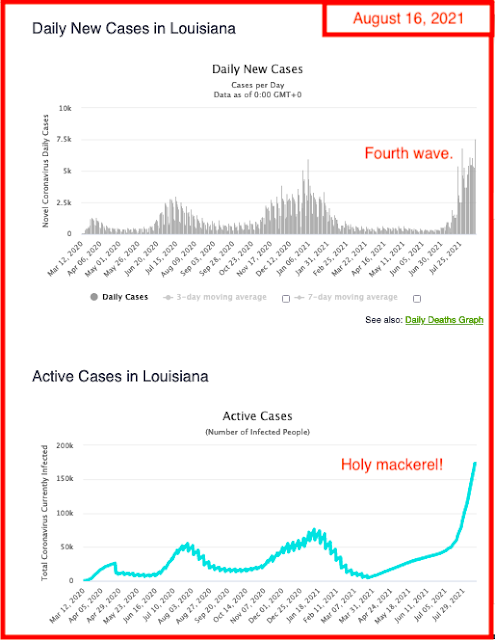 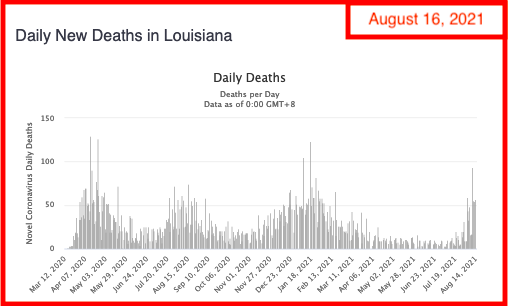 Influenza viruse, including "seasonal flu" viruses and the Spanish flu: the genomes of all influenza viruses are composed of eight single-stranded RNA segments . These RNAs are negative-sense molecules.

The sequence of the 1918 influenza genome ("Spanish flu") proved to be puzzling and did not immediately answer researchers' questions regarding the strain's origin.

In the later flu pandemics that occurred in 1957 and 1968, the responsible strains appeared to have arisen through reassortment of avian-derived HA genes into human strains.

In contrast, the HA gene of the 1918 strain is most closely related to an influenza isolate obtained from swine.

The 1918 HA sequence bears some similarities to those sequences commonly seen among avian strains, but it differs from them much more than the strains responsible for the later pandemics. Indeed, when comparing the HA genes from all three pandemic strains to those from both Eurasian and North American avian species, the 1918 HA genes bear the least resemblance.

Taken together, these data suggest that pigs may have been an intermediate host for the 1918 strain, although this remains to be demonstrated.

A huge "thank you" to a reader for alerting me to The Williston Herald story.

For background, see this June 2, 2021, post: blue hydrogen, Mitsubishi, Denbury, RBN Energy, and all that jazz.

“Green hydrogen is what Europe absolutely wants. But blue hydrogen is what a lot of the world thinks we can afford sooner and it’s probably going to be good enough,” he said. “It’s really more of a market-driven thing than a technology thing.”

From The Williston Herald (by the way, has anyone noticed that the Herald is getting better and better or is that just me?), link here. Data points:

To that end, Figure 1 below shows a simplified process flow diagram for a typical SMR unit.

To create hydrogen via SMR, natural gas is first fed into a processing unit called a reformer. There it reacts with high-temperature steam and a catalyst, usually one that is nickel-based, to form hydrogen and carbon monoxide. The resulting gas mix is then fed to the shift conversion unit, where the carbon monoxide reacts with the steam to produce even more hydrogen, plus carbon dioxide (CO2). The hydrogen and carbon dioxide are then sent to a pressure swing adsorption (PSA) unit, where the CO2 is removed from the hydrogen.

Posted by Bruce Oksol at 2:44 PM No comments:

The market: I was absolutely, positively not going to check the market today. I saw the futures last night and the tea leaves suggested the markets were unconcerned about global events. The major indices were likely to open in the red but one must recall that the market is at all-time highs. One should expect some a) profit-taking; and, b) volatility.

I was curious what the market was doing.

Are you kidding me! The market is mixed, as they say. LOL. In fact, both the S&P 500 and the Dow 30 had erased all losses and both were trading in the "green." NASDAQ was down fifty points.

I was curious. Last week the "cup and handle" suggested AAPL was going to break $150. AAPL was down about $2.50 at the opening, but holy mackerel -- despite the child sexual abuse policy announcement and global warming in Afghanistan, AAPL is now up $1.60 / share, now trading above $150.

That blows me away.

What about other US bellwethers, as they say? I'm only going to check two, and won't check any shale operators. Here are the two:

This looks fun. From Boston.com, the bash by Julia Taliesin, August 8, 2021, the day after the party.

The bash planned for Barack Obama’s 60th birthday on Martha’s Vineyard was apparently scaled back, but leaked photos and reports suggest one heck of a party.

Though Obama’s birthday was officially Aug. 4, he hosted a star-studded event at the family’s Edgartown summer home on Saturday night. The party was held on the property’s 20-acres; drone photos show a massive party tent and dance floor set up on the oceanside.

Exactly what happened at the party remains mostly unknown. Several attendees and performers posted photos or videos to social media during the party, but all have since been deleted. Obamas on Instagram, according to NBC Boston, though the post was later removed.

“HAPPY BIRTHDAY TO THE COOLEST @barackobama surprise!! I’m grateful to have been able to celebrate with you and your family SAFELY,” the artist wrote.

A lot of A-list folks were dis-invited at the last minute, even after landing on the island (wow), and folks like Oprah Winfrey and Joe Biden RSVP's in the negative.

Musician Eryka Badu posted a video of H.E.R. and Obama dancing to her Instagram story but it was later taken down.

The birthday bash was held just as the third wave was beginning to appear in that state.

The Sturgis Rally, began about the same time, and has now ended. 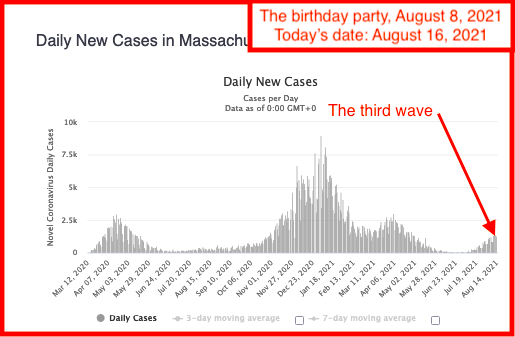 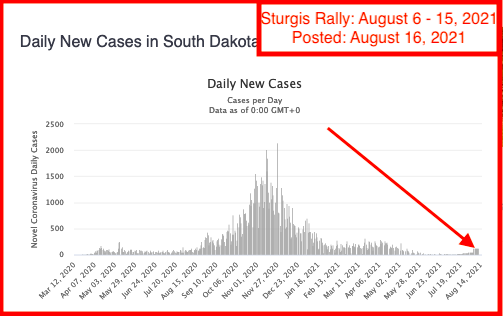 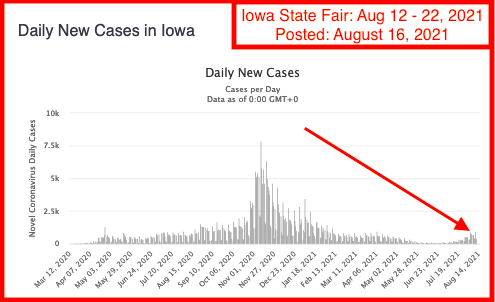 All of this, of course, has been overshadowed by global warming and systemic racism issues playing out in Afghanistan over the weekend. 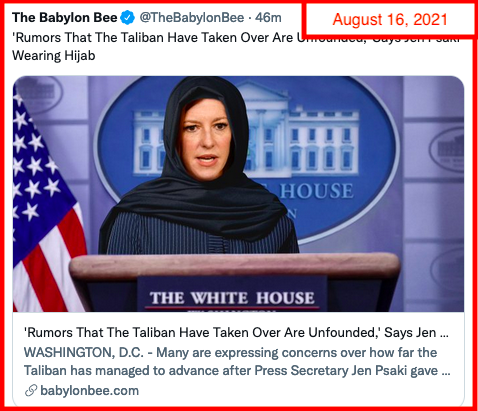 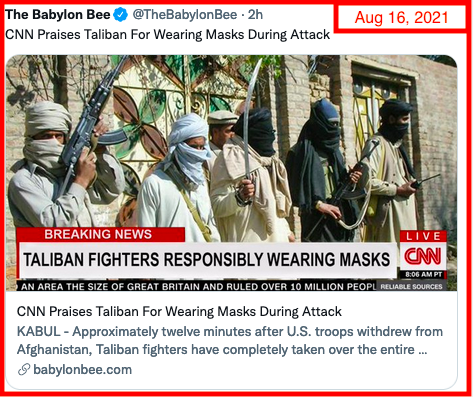 Prior to this weekend's events in Afghanistan, SecDef stated his top priority was climate change. "Afghanistan" did not make the list of his top three priorities, nor did Taiwan.

This page will not be updated. This well is tracked elsewhere.

Paperwork often lags what is going on in the field. In addition, the NDIC database is undergoing updates and information was last current July 14, 2021.

Here's another great well, trending toward 500,000 bbls in less than eight months, still being reported as a DUC. I remember all those narratives that daughter wells would never do as well as the parent wells. Whatever.

Posted by Bruce Oksol at 1:06 PM No comments:

This page will not be updated. This well is tracked here.

August 17, 2021: in an earlier post, I suggested we will see heads roll in Washington, DC, over the Afghanistan debacle. I suggested we will start seeing internecine fighting, and perhaps a circular firing squad. It looks like The Wall Street Journal has weighed in. Link here.  In other news, it is being reported that Biden has not spoken with one other world leader during this debacle.

Monday morning, incredibly slow news day. The president is on vacation; the war is over; ticker tape parade in Kabul later this week. Items below are all I could find and I don't think any of them are worth reading.

WMT: stock popped last week. It was rumored that the Taliban would be opening a new Walmart in Kabul. Earnings out tomorrow.

Global warming: the latest WSJ op-ed, which I have not read (yet). Here for the archives. Link here.

Michael Malice over at twitter: I'm still confused. Was the Afghanistan debacle due to systemic racism or to climate change? Link here.

If the deal were to go through, this would creat a new international super duper independent built for scale and resilience, with a long-term focus on LNG but exposure in the medium term to high-margin, deepwater (GOM) oil.

WTI drops below $67 (again). Traders fear Taliban will flood the market with crude oil to destroy the US shale companies.

Every day, midstream companies in North America transport massive volumes of crude oil, natural gas, NGLs, and refined products to market. Without their pipelines, economic activity would rapidly grind to a halt. Still, environmental critics and ESG-conscious investors and lenders are quick to point out that the commodities that midstreamers pipe are among the leading sources of greenhouse gas emissions, and that, at the very least, pipeline companies should be reducing or even offsetting the carbon dioxide (CO2) and other GHGs associated with operating their networks. That’s now happening in a big way — and in a variety of ways — as we discuss in today’s blog.