Wells of interest in the area:

This appears to be the story coming out of Hurricane Ida re: energy ...  from twitter today, multiple tweets like this:

And someone on social media reading these tweets, politely asked what "GOM" meant.

I honestly do not understand this.

Seriously: tell me what this is all about.

Apparently SCOTUS felt this was a state's right "thing" and wanted to give the parties more time to sort this out. A pending case before SCOTUS is more pertinent with regard to Roe vs Wade.

I never cared for this guy, but his story really is a microcosm of how great this country is.

From July 1943 to September 1946, he served in the United States Naval Reserve, with active duty as an ensign in the Pacific Theater.

He entered Stanford Law School in September 1946, where he founded and became the first editor of the new Stanford Law Review. While there, he was also elected to the Order of the Coif.

Christopher became the first graduate of Stanford Law School to become a law clerk for a United States Supreme Court Justice when he served as law clerk to Justice William O. Douglas from October 1949 to September 1950.

He practiced law with the firm of O'Melveny & Myers from October 1950 to June 1967, becoming a partner in 1958 and serving as special counsel to Governor Pat Brown.

Christopher served as United States Deputy Attorney General from June 1967 until January 20, 1969, after which he rejoined O'Melveny & Myers.

President Lyndon B. Johnson selected him to assist federal efforts to combat the urban riots in Detroit during July 1967 and in Chicago during April 1968. In 1974, Christopher served as the president of the Los Angeles County Bar Association.

Deja Vu All Over Again: Fastest Growing Counties In The US -- September 5, 2021

The four counties that are the center of the Bakken: Dunn County, McKenzie County, Mountrail County, and Williams County.

I was reminded of those two posts when a reader sent me this link earlier today: from the AP via Yahoo!News: "Oil boom remakes North Dakota county with fastest growth in the US.

First came the roughnecks and other oil field workers, almost all men.

Lured by steady wages as the nation climbed out of the Great Recession, they filled McKenzie County’s few motel rooms, then began sleeping in cars, tents, trailers — anything to hide from the cold wind cutting across the North Dakota prairie.

Once empty dirt roads suddenly were clogged with tanker trucks. Crime rates spiked. Soon everything shifted yet again: The workers’ spouses and children arrived. Classrooms swelled. Apartment buildings cropped up beside oil rigs. And the newcomers made this Northern Plains community their own.

The growth made McKenzie the nation’s fastest-growing county during the past decade, according to the Census Bureau. It swept through like a twisting dust devil, shattering the rural innocence of a region known for inhospitable winters and long summer days perfect for growing crops. But it also brought youth, diversity and better wages — breathing new life into somnolent towns that had been losing population since the 1930s.

“The auction will be held live at the Krinke’s family ranch,” said Yvette VanDerBrink of VanDerBrink Auctions, which is conducting the sale. “There won’t be any cell phone reception, but there is high-speed Internet to the residence and online bidding is available. But it’s best to come in person and spend a beautiful weekend on the high plains of gorgeous western North Dakota. There’s more than enough to finish off that man cave or score a hot rod or collector car.”

Internet bidding is available via the VanDerBrink website: www.VanDerBrinkAuctions.com.

On another note, name the former US secretary of state born in Scranton, ND.

Jobs: The WSJ has a most interesting article. I really didn't care much about the thesis but the graphic helped me put things in perspective. Link here. Essay question worth 50 points in today's pop quiz: if you were going to annotate this graph, how would you annotate it? Answer here. The big question: why are folks not taking jobs? Rhetorical. A person retiring this year at thefull-retirement age of 66 and two months—and meeting the requirements outlined above—would receive an initial monthly benefit of $3,148. And, in 2021, the maximum taxable income is $142,800.

If you delay claiming Social Security until age 70, you earn “delayed retirement credits,” which pump up the benefit you eventually receive by 8% a year. In 2021, a person who first claims Social Security at age 70—and, again, who met the requirements discussed above—would receive $3,895 a month, the maximum benefit.

How bad is it? Let's look at the graph: 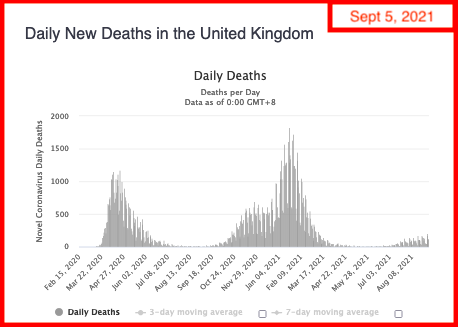 Amazon is huge in the DFW area. I don't recall seeing Amazon Air at DFW but the Amazon fulfillment centers are everywhere .... and huge.

From CNBC with some nice graphics: link here.

Americans Are More Than Ready To Move On -- MSM, College Students -- Covid? What Covid? September 5, 2021

Front page of MSM: no Covid-19 stories or buried deeply. 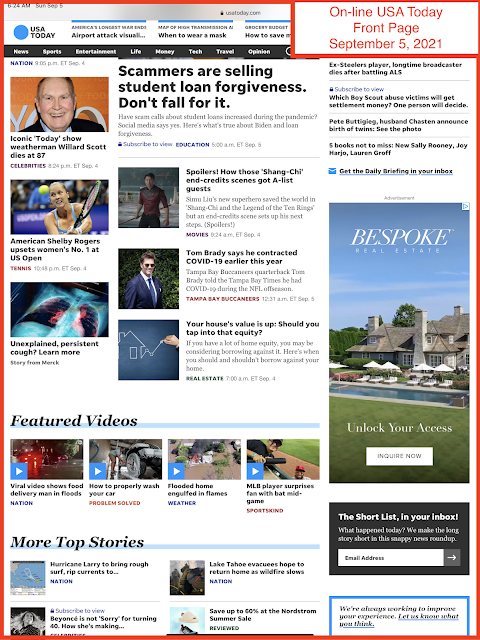 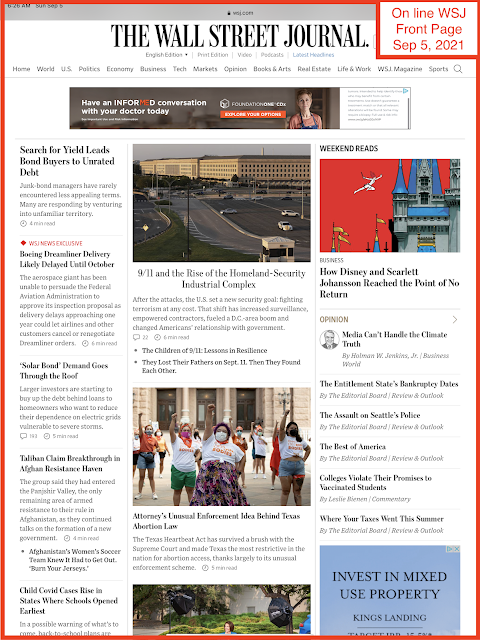