Rigzone blog: what was the biggest oil and/or gas industry surprise of 2016? This is pretty cool. Rigzone's top surprise, or top story, was the very same one I had. These were the stories listed.

Over at "the Big Stories," I have a section called "the Doomsday Chronicles." And there I track "the demise of the Big Box store" which just coincidentally began with the Obama presidency. I say all that to note this article over at MarketWatch:


Macy's and Kohl's [shares] plunge after weak holiday sales. Macy's said it will slash more than 10,000 jobs -- ten thousand -- and detailed plans to close dozens of stores after another holiday season of weak sales, providing more evidence (as if more evidence was needed) that department stores have lost their once-central place in American retailing.

The story is also over at The New York Times.


The announcement on Wednesday continued a trend for Macy’s, which announced last January that it was eliminating about 4,500 jobs in a major restructuring. Then, too, it said slumping holiday season sales had hurt its bottom line.

The company, which now has 730 stores, announced in August that it would close 100 of them. On Wednesday, it identified 68 stores to be closed.

The 158,000-square-foot store in the Douglaston neighborhood of Queens, which opened in 1981, will close. Stores at the Marketplace Mall in Rochester; at the Oakdale Mall in Johnson City, N.Y., near Binghamton; and at the Preakness Shopping Center in Wayne, N.J., will close.

Cramer has something he calls FANG (Facebook, Amazon, Netflix, and Google). FANGS (adding Starbucks) would also work.  FANGS might be better; FANG could be confused with the ticker symbol for Diamondback Energy.
Posted by Bruce Oksol at 11:11 PM No comments:

I wonder if the increase in US crude oil imports, for the most part, was along the northeast coast. RBN Energy noted that when Saudi Arabia changed course in 2014, Bakken CBR to the northeast practically came to a standstill. [See first comment: I had forgotten about contango and storage; a lot of oil imported this past month could have gone into storage anticipating better prices in six months.]

I don't know. I'm sure the data is out there but that would be beyond the scope of this blog.

I've been posting a number of links to stories regarding Mexico; one can start here. Mexico could be facing a "perfect storm" and it isn't beyond the pale to think that Mexico could face more dire economic straits than what folks are talking about. After the election I returned to watching MSNBC and CNBC  (I won't watch Fox News except in passing). But after two weeks of "Morning Joe," I grew tired of MSNBC and switched completely to CNBC, but that, too, has become tiresome and trivial. I am amazed that "they" can talk for twelve hours and have so little to say about what is going on in Mexico and what is going on in Canada.

What made me think of that was this story over at the AP today: "scuttled Ford plant has Mexico fearing more under Trump."

When/if Mexico implodes, there will be a lot of finger pointing, and I won't be surprised if Mexico's problems are blamed on a change in American policy. Good, bad, or indifferent, there will be some in America who will say that it was Mexico's own failure to help stem the tide of illegal immigration that got Donald Trump elected. Actions have consequences.

As I write that, my mind begins to wander, but those thoughts will have to wait. Our older granddaughter has finished water polo practice and is ready to head home.

By the way, here's another "straw man." CNBC talking heads all day talk about how few cars made by US manufacturers in Mexico are really sold back here in the states. In fact, they tell you, 90% of US cars made in Mexico are sold around the world. So the obvious question is why aren't US companies building those cars in the US to sell around the world. And that is a great example of a "straw man" argument.

When I heard that Ford's profit margin or cost savings or however "they" measure it, amounted to a measly "10% savings." That is incredible. Ford would building a factory in Mexico just to save 10%. I assume there's enough inefficiency in US plants that could easily be tightened, knocking off that 10% waste, and doing just as well here in the states. And for the country (the US) all those folks working, paying taxes, supporting their communities, their churches, their schools. When I heard that we're talking a measly 10%, I understood even better why Trump and US workers are so enraged about sending jobs overseas, or across the border to Mexico. Now with relatively inexpensive energy here in the states compared to counties that need to import fossil fuel, something tells me the US may be competitive enough to offset the difference in labor costs.

And, oh, by the way, saying that an American worker costs several times more than a worker across the border is another straw man argument. The issue is not the "cost" of an individual worker but the productivity of the manufacturing plant as a whole.

Yesterday, the cupcakes over at The Los Angeles Times were grousing that the snow pack this year was 70% of normal compared to 105% at this time last year.

Twenty-four hours later the forecast is for up to 20 feet of snow to be dumped on parts of California in the next few days. I can hardly wait.

This tells me two things:

There is a God.

And God has a huge sense of humor.

By the way, snow pack can be tracked here: http://snowbrains.com/wp-content/uploads/2016/12/west_swepctnormal_update.png.

And you can change the "date" by simply changing the year/month in the URL. Seriously. I will try ot remember to check snow pack two months from now.

The photo below was taken by "Lois and Clyde" near New Salem, ND.

Full disclosure: I have a Costco card, basic membership, $55 / year.

I "never" shop at Costco. I've been to our local Costco once in the past year and did not buy anything. No, I guess I've been there twice. The other time was with my wife. She bought a chicken. (Not a live chicken but ... you know what I mean....)

There is talk that Costco may raise the price of basic membership from $55 to $60. I would still renew. I would renew up to $75/year. I would probably even renew at $100/year, and I would probably shop there just as often.

The one time two times I went to Costco this past year I noted that many of the customers looked no richer nor no poorer than I (looked). In fact, it was getting to look a lot like our local Wal-Mart. Based on that observation, I think Costco would be smart to raise the basic membership to $75/year. Maybe more.

Didn't Mark Twain Groucho Marx say something to the effect that he didn't "believe" in clubs: he wouldn't want to be part of any club that would accept him as a member? Costco is starting to get that "feel." (An eagle-eyed reader caught my "Mark Twain" mistake.)

All living things on Earth fall into one of three main categories, or domains: Eukaryota (us), Bacteria (not us), and Archaea (not us, either).

The defining characteristic of eukaryotic cells is the presence of a nucleus.

I knew all that. The following is new to me.

In eukaryotic cells and in archaea, the DNA is wrapped every so often along its length around blobs of a protein called histones.

That's from The Cell: A Visual Tour of the Building Block of Life, by Jack Challoner, c. 2015. This information might be important if you have a cocktail party to attend this weekend. Or not.
Posted by Bruce Oksol at 9:06 PM No comments:

Honorable mentions:
The blog's top stories for 2016 at this link.

Oasis Reports Another Great Bakken Well; Add In The Natural Gas And It's Quite A Well -- January 4, 2017

This is mostly being posted for newbies. This well is not unremarkable among the wells now being reported in the Bakken.

This well came off the confidential list over the long weekend.

Note that this well produced more than 100,000 bbls of oil in less than six months (actually, less than five months).

Also, note the incredible amount of natural gas produced. Unfortunately, it is not yet all being captured/processed/sold, but 60,000 MCF translates to 10,000 boe which could be added to the 20,000 bbls of crude oil produced in the early months.

In yesterday's daily activity reports, the following wells were noted to have been released from the confidential list:

The Science Is Settled -- Global Warming Adds Tons Of Ice To Greenland -- Predicted By Warmists -- January 4, 2017

From The Daily Caller:


Greenland’s ice sheet kicked off 2017 gaining about eight gigatons of snow and ice, which is well above what’s usually added to the ice sheet January 1 for the last 24 years, according to Danish meteorologists.

In fact, Greenland’s ice sheet has been gaining ice and snow at a rate not seen in years based on Danish Meteorological Institute (DMI) data. DMI reports the Greenland ice sheet’s “mass surface budget” has been growing significantly since October, 2016.

Greenland’s “surface mass budget” for winter 2016-2017 is already more than two standard deviations higher than the northern ice sheet’s mean snow and ice accumulation over the last 24 years. DMI data shows the ice sheet added 8 gigatons of ice and snow January 1, 2017, well above the standard deviation for that day.

If the GOP is smart, and I'm having my doubts, they need to start reading this "stuff" into the Federal Register.  I know David Muir, over at ABC News, won't be reading it. Maybe Trump will tweet it.

This is actually quite funny -- I've been mentioning "quantum theory" off and on for the past few weeks. Not for any reason; I just get into different phases that run awhile and then I move on to something else.

Coincidentally, I've also noted that quantum theory is being referenced in any number of other media outlets. Today was the latest example: in the current issue of The New York Review of Books: "The Trouble with Quantum Mechanics" by Steven Weinberg. I've not read it yet. I'm restraining myself until I am really ready to enjoy it.

For folks who feel comfortable with the subject, they may enjoy Louisa Gilder's The Age of Entanglement: When Quantum Physics Was Reborn, c. 2008. It remains my favorite "pop" reference on quantum.
Posted by Bruce Oksol at 12:44 PM No comments:

Auto Sales -- Another Trump Rally? SM Energy Looking To Boost Presence In The Permian; Drop Back In Eagle Ford -- January 4, 2017 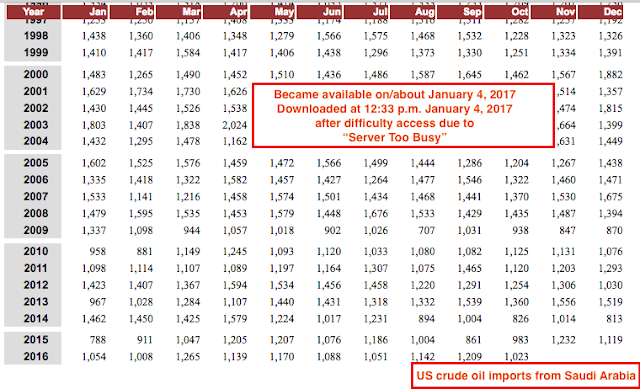 Drudge Report DDOS: last night I blogged that I was unable to access Drudge and suspected DDOS; today that was confirmed.

Auto sales, the Trump rally continues: auto sales for December come in much higher than expected; once full numbers are reported it's possible December sales -- the Trump effect -- will push annual sales for 2016 at record pace.


RBN Energy: prepping crude for pipeline and a min-crisis in the Permian.

Mid-morning: up about 45 points. NYSE:
The opening: continues to melt up; about 26 points to the upside.

Mainstream media is calling it a "rare visit." Other than state-of-the-union addresses has the president every visited Congress?

Which takes us to #4 of the 20 songs to be played in the transition countdown.


Hit the Road, Jack, Ray Charles
Posted by Bruce Oksol at 6:42 AM No comments: