I plan to be on the road for about ten days. Three days driving from home to destination; three days at the destination; and three to four days getting back home.

On these long road trips I always rent a car from Enterprise. I always ask for the "best deal." LOL. All I need is a compact car -- it's just me, but they always have more than I need. This time they gave me a brand new Jeep Compass, and I mean, "brand new." It had 747 miles on it and it still had that "new car smell." I rent from the neighborhood Enterprise which is about five minutes by bike from our home in Grapevine, TX (near Dallas-Ft Worth International Airport). Because it's not at the airport, there are no airport fees.

My destination is the north shore of Flathead Lake, Montana, just to the south and west of Glacier National Park. The family has a lakeside home there. Another long story.

When I drive, I generally drive "straight-through," sleeping in catnaps along the road, preferably at rest stops, but not always. If I stop along the road, I am often visited by the local highway patrol who check in on me to make sure I'm okay, and they they always suggest a better spot to park. LOL.

The trip, according to Google maps, would be 25 hours driving time. I used to drive slowly, not so much any more, and I stop often, so the 25 hours can turn out to be significantly longer. Denver was the halfway point. My plan to was to drive to Denver and then rest there. I arrived south of Denver about 2:00 a.m. and slept for three hours in a rest area, and then drove into Denver / Colorado Springs during rush hour. Not planned; that's just the way it worked out.

I had planned to take a more direct route to my destination, but en route I learned that my sisters who would be joining me would arrive later than I expected, which meant I had a full extra day to travel. So, I took a detour: up to Cheyenne as planned, but then up to Casper, and then west to Riverton / Shoshone / Thermopolis. Incredible scenery. I had thought about staying overnight in Thermopolis but it was still too early to stop driving, so I drove up Cody. I've read a lot about Thermopolis but had never visited so eager to see it. I was not disappointed.

I have never been in this part of Wyoming. I can drive through Yellowstone Park tomorrow -- a short cut as it were to get to Flathead Lake.

Wow, I've never seen so many pronghorn -- which I have always called pronghorn antelope. I mentioned that to the person working in the bookstore in Cody. She mentioned that that pronghorn are pretty smart; they tend to stay away from the road; it's the deer that cause the problems, jumping into oncoming traffic.

Weather was perfect. Traffic was great. Getting through the Denver area was no big deal.

The new trend in Denver for Halloween: carving pineapples instead of pumpkins.

Between Casper, WY, and Shoshone, WH, I was headed west, when I passed a huge 18-wheeler carrying a huge load of baled hay. The truck was headed east, but stopped on the shoulder of the road, obviously having some problem. As I passed I realized he had lost part of his load.

As I drove on -- 80 mph was the traffic on this narrow rural road -- I thought that the driver was going to have a lot of difficulty solving his problem by himself. So, about a mile down the road, I turned around and drove back. I parked in front of his truck for safety reasons, and then walked back to talk to the driver who was trying to figure out he was was going to get his load tied back down all by himself. The challenge was not difficult, and not much muscle was required -- what was needed was two men, two sets of hands, as they say. In a matter of minutes we got stuff back together. It turned out he was also from Texas, taking the hay back to "hill country," near San Antonio, TX. He was surprised to hear I was from Dallas on that rural little road.

Parting shot as I got ready to drive away: 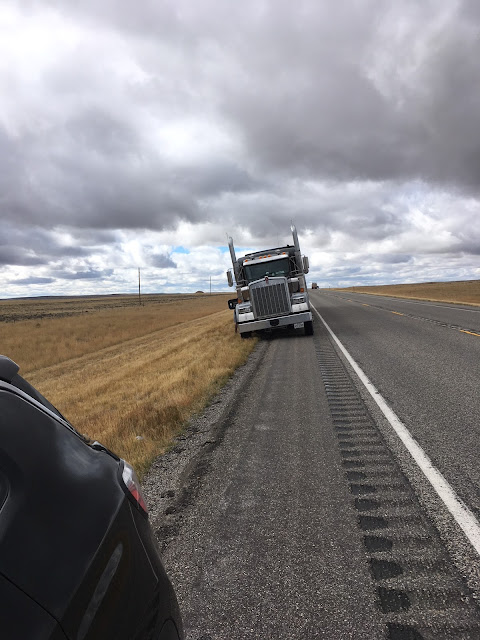 I picked the perfect day to drive.

I listened to three hours of Rush Limbaugh -- his full program -- perhaps one of his best shows ever regarding the Kavanaugh thing. So much to say, but I won't. It was announced during his show that Susan Collins would be "giving a speech" at 3:00 p.m. Washington time. That was a very, very interesting time. It would immediately follow Rush Limbaugh's three-hour show. I do not think that was coincidental. Her speech started exactly at 3:00 p.m, immediately following Rush. Very well choreographed -- again, I don't think it was coincidental. (Her time, 3:00 p.m.; here in Wyoming, it was 1:00 p.m. when she started). I listened to every word of that speech. I was spellbound. It was an incredible speech. She hit every "point." Anyone paying attention would have been blown away by it.

Combining her speech with some interesting revelations by Rush Limbaugh -- so much to say, but I'm going to give it a rest.

I will spend the night in Cody, Wyoming. I will leave early in the morning and cut through Yellowstone Park and then end up in Lakeside, MT. I will be there three days max. Then the long trip home. Not sure what route I will take but after reading that article on that fabulous restaurant out in the middle of nowhere, Boulder, UT, I am thinking of driving home via Utah. It will add four or five hours to the total trip but if I stop to explore, it could add another day.

I couldn't believe how "lucky" I was with music stations along the way. I found some incredible classical country music stations.
Posted by Bruce Oksol at 9:18 PM 4 comments:

Price of gasoline, unleaded: The car:


I don't recall ever seeing an unemployment rate this low. Apparently 49 years ago. That was the year I graduated from high school, 1969, and, oh, by the way, the best year ever for music.

Link for graphic below.


Link here.  Trending toward a "confirmation."


The U.S. exploration and production sector has reaped many benefits from its transformation to large-scale, manufacturing-style exploitation of premier resource plays, generating record oil and gas production while slashing production and reserve replacement costs by 50%. While increased efficiency and rising output have moved the industry solidly into the black after three years of losses, profit growth stalled in the second quarter 2018 despite a $5/bbl increase in oil prices to about $68/bbl. The cause is largely beyond the control of the producers: constraints on getting the increased output to markets. In certain producing regions, most notably the Permian Basin, production growth has far outpaced expansions to the infrastructure required to process and transport it. Today, we explain why these constraints are critical to assessing the outlook for industry profitability and cash flow over at least the next two to four quarters.