Nasdaq: closes at a record high.

Theresa May, UK, talking "free trade agreement" with US in concert with Brexit.

Without question, in "our" thirty-years-plus-one-day career in the US Air Force, the best assignment was our first overseas tour, Bitburg Air Base. Facebook has a page devoted to Air Force members who served at Bitburg. It's that special.

I've just finished The Quiet American by Graham Green, the story of a journalist and (probably) a spy for the OSS assigned to Saigon during the First Indochina War, the war in which the French were fighting in Vietnam and before the Americans got heavily involved. Graham Greene mentions the battle at Phat Diem, 1951, and the book was published in 1955, so it obviously takes place sometime between those two years.

For a youngster, 20 years of age back in 1955, he/she (and most likely a "he) would be 83 years old today. Probably not many still living that can say they were in Saigon/Hanoi back in 1955. For those that can, I can only assume the memories would be haunting. A lot of "what-ifs."

Great, great book. It is amazing how Graham Greene, writing in the early 1950's was able to foreshadow events that took place ten years later.

If you have not had your "fill" of Vietnam, and have not discovered Graham Greene, this is a great place to start.

A love triangle: the narrator/journalist, Thomas Fowler, an older fellow, a journalist, English, probably in his 50s; Alden Pyle, an idealistic 26-year-old American agent, probably OSS; and, Phuong, a young (maybe 18 years old) Vietnamese woman; their lover. In Los Angeles, through my Japanese mother-in-law, and in the US Air Force, I met many Asian war brides. The stories were very, very similar. The ones who survived with a marriage intact seemed to be the rare ones.
Posted by Bruce Oksol at 3:08 PM No comments:

See poll at sidebar at the right.

By the way, this is likely why there was a "discrepancy" in Tesla's most recent "delivery" announcement.

Someone noted that:
My comments:
But this is the important point: by going over the 200K threshold on July 1, 2018, Tesla customers get the full credit for this quarter (the entire quarter) plus the following quarter, and that's why it takes "us" to December 31 before the phase out begins. Some will incorrectly state that for Tesla the phase-out has begun. No, the phaseout does not begin until January 1, 2019. And by then, a lot could change.

Every night, starting about 9:00 p.m. and lasting until 5:00 a.m. major road construction is the norm on the north side of DFW airport where Texas highways 26, 114, 121, and 360 converge (and now the Texas light rail under construction). In some spots, the four lanes (with off-ramps and on-ramps, up to six lanes) narrow to one lane. The traffic backs up for a mile or two but steadily moves forward. It keeps moving forward because folks in the long line generally make room for new cars merging from closing lanes. I am impressed with how helpful most folks are.

About two weeks ago while blogging/reading in Starbucks, a 20-something African-American sat across from me, not ordering anything to drink, but constantly looking at his mobile phone and generally looking a bit unhappy. After about ten minutes, I offered my Starbucks card to him and asked him if he wanted anything to eat or drink. Wow, did he break out into a big smile. "No, " he said, "I'm just waiting for a friend. And, actually I don't like coffee anyway." About five minutes later his friend arrived and he seemed very happy.

Two nights ago while blogging at McDonald's a 20-something white male sat at the table next to me -- it was the only place the restaurant had an outlet. He was charging his mobile phone which had just died. He was on his way from Dallas back to Arkansas and without "maps" on his mobile phone he had no idea where he was. He was not even aware he had just exited I-35W, the main thoroughfare out of Ft Worth. He also did not order anything, just checked his messages, etc. After a bit, I asked him if he had any money for something to eat; he said he did, and shortly after that, he went to get something to eat. We didn't talk much but it was clear he was happy about "Texas friendly."

A week ago, May and I went to dinner with our son-in-law, daughter, and the granddaughters. We split the cost of the meal, but in addition, we covered the tip. Our son-in-law suggested that the tip we left was more than twice what was necessary. I told him that May's mom was a waitress -- she worked in Japanese restaurants in Los Angeles until she could work no longer. That was the end of the discussion about tipping.

Decades ago, in a different life, in a land far, far away, I hitchhiked from Los Angeles to Sioux Falls, SD. I had $4.00 in my pocket when I set out form LA. Probably four dollars and some additional change. A driver picked me up on the outskirts of Los Angeles and we drove to Las Vegas (long story, short) where he bought me dinner. I still had my $4.00. A hunting party picked me up on the north side of Las Vegas and drove me to St George, Utah. They stopped for breakfast and bought my breakfast, telling me that I could leave the tip. They left the table to pay the bill for four of us. I have long forgotten how much I left but I bet I had less than a dollar for the rest of the trip back to Sioux Falls.

Housekeeping note: I have added a link to a page regarding "1031 exchanges" at the sidebar at the right. It's under the general heading "Handbook for Mineral Owners," found right under the "archive icon link."

Reminder: this blog is not an investment site. I post this mostly to help me better understand the oil and gas sector and the Bakken. Until I started following the Bakken, I had never even heard of "1031 exchanges." Something suggests that these exchanges may work for "stuff" unrelated to oil and gas, and maybe that's why our apartment complex seems to get a new owner (usually out of California) every three or four years.
Posted by Bruce Oksol at 11:37 AM No comments:

I no longer follow the "Delta refinery" and I have definitely "lost the bubble" regarding that refinery and Bakken CBR, but at one time it was quite a story. The original post and updates are at this link.

Update: according to ArgusMedia, profits at the "Delta refinery" helped "stem" rising jet fuel costs. The byline is "Houston." From the article:
I don't know the source of oil for this refinery -- whether it's still Bakken CBR or not.

I'm sure I'm missing something, but every headline I'm reading (I often don't read the story) says that the price of oil plummeted yesterday -- as much as 5% in some cases -- because production was coming back on line in Libya.

So, here's the screenshot from Platts twitter feed regarding Libya:

Give me a break. So, analysts are telling me that WTI fell 5% yesterday because Libya production was coming back on line. And this is just production; it still has to get to the port and shipped. Give me a break. Less than a 100,000 bopd. Is that right? The global oil market is around 100 million bopd. The Libyan export number is a rounding error. North Dakota alone, out of three or four counties, produces 10x that amount, and virtually all of North Dakota's production is exported out of state. I think the price of oil is driven by "talk" in many, many cases.

WTI is now below $70/bbl -- at least it was earlier this morning. Haven't checked recently.
Posted by Bruce Oksol at 11:08 AM No comments:

Now, I can see us exporting light sweet crude on one hand, and importing sour crude that refineries are optimized for on the other, but gasoline is gasoline, no? so why are we exporting so much overseas that we have to import it from the Saudis? 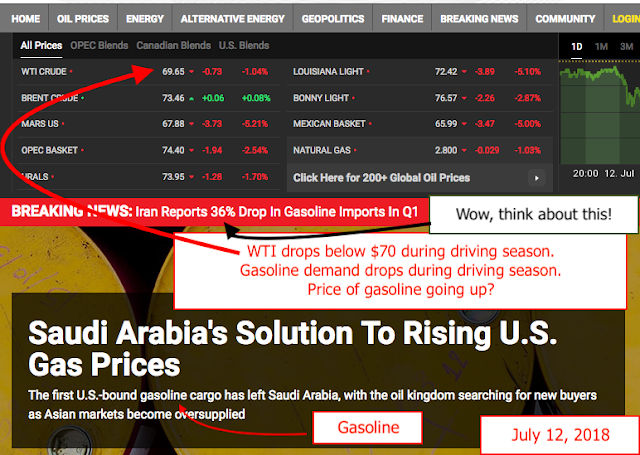 2. WTI has dropped below $70. WTI is priced at Cushing. Must be excess of WTI at Cushing. "Every" oil is down "at the moment," except a slight rise in Brent -- I believe there's a "worker's strike" in the North Sea.

3. But look at that Iranian story: if accurate, Iran's gasoline imports dropped 36% year-over-year. Link here. Apparently this is due to the fact that Iran has brought a huge new refinery on line -- in prepartin for sanctions?


Iran imported 36 percent less gasoline than a year earlier during the first quarter of the Iranian year beginning on March 21 in what may well be a signal the country is shoring up its domestic supply as the start of U.S. sanctions draw near.

Iranian media quoted the managing director of the National Iranian Oil Products Distribution Company as saying that the average daily gasoline imports stood at 5.7 million liters during the first quarter. State news agency IRNA separately reported that the import decline was linked to the start of gasoline production at a new refinery, the Persian Gulf Star Refinery.

Link here.
Posted by Bruce Oksol at 9:17 AM No comments:


RBN Energy: the Nueva Era pipeline provides yet another outlet for Texas gas -- Eagle Ford to Mexico.
Posted by Bruce Oksol at 7:45 AM No comments: