It looks like the URL may have changed for the North Dakota quarterly lease sales site. It appears the URL has added "www" to the beginning of the URL.

The next quarterly lease sale is August, 2019.

Obviously this will affect previous posts with the link. I've updated a few of the recent posts but won't update the older ones unless I happen to visit the sites for other reasons.

EnergyNet is the site one finds linked at the North Dakota state site.

At the sidebar at the right, I also link "1031 Exchange" information.

I have not checked to see if the URLs still "work" and/or if the information is current. I have no relationship with any of these sites.
Posted by Bruce Oksol at 9:37 PM No comments:

See this well:
Lots of work to do in the Bakken: re-work wells on a regular basis; mini-re-fracks; major re-fracks; neighboring fracks.

A small re-frack -- only 1.5 million lbs, only 12 stages, and one gets production like this with newer neighboring wells re-fracked at same time:

Nothing new here; just clearing off the desktop. 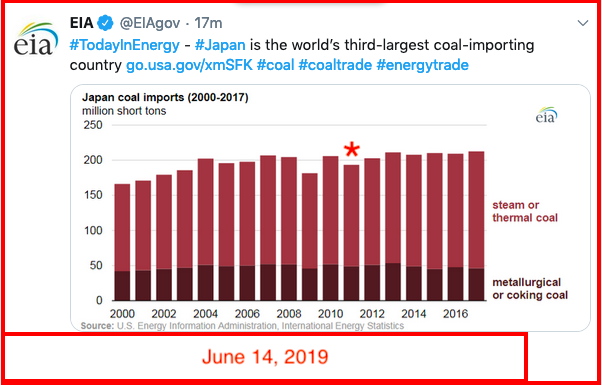 The asterisk (*) marks the year of the nuclear reactor disaster in Japan. I don't see a whole lot of difference in coal imports before and after the disaster. From google:


Japan depends on fossil fuels such as oil/coal/natural gas (LNG) imported from abroad. Before the earthquake, dependence was 81% on primary energy supply basis , but it is 89% in FY 2016 due to the generation by thermal power plants and the shutdown of nuclear power plants.

In less than two years, US LNG exports have more than doubled. 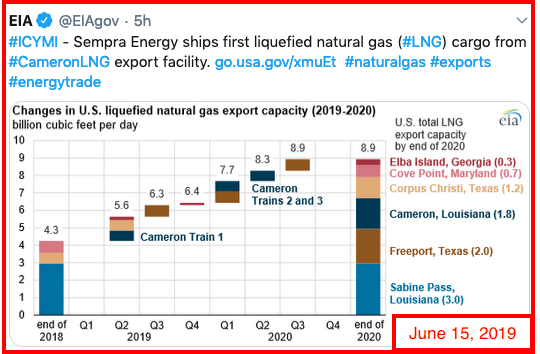 I probably would not have posted this but for the fact that I have some very fond memories of north England.


It’s been a truly miserable run-up to summer for folks in the UK so far, with official data revealing England is currently on for it’s 17th coldest June in records dating back to 1659.

The Central England Temperature (CET) record measures the monthly mean surface air temperatures for the Midlands region of England, and is the longest series of monthly temperature observations in existence.

This month’s cold temperatures and reduced sunlight hours will have already hampered the growth of many open-field crops, which in turn will pile further pressure on already surging commodity markets following the inclement-weather-related planting issues in Australia, America, Africa and China.

In addition, 2019’s frigid June comes on the back of an historically cool May.

Bottom line, according to the article: The cold times are returning, as the sun enters it’s next Grand Solar Minimum cycle.

Meanwhile,  from the National Weather Service (US government): solar cycle 25 will  be below average, simlar to solar cycle 24.


Scientists charged with predicting the Sun’s activity for the next 11-year solar cycle say that it’s likely to be weak, much like the current one. The current solar cycle, Cycle 24, is declining and predicted to reach solar minimum - the period when the Sun is least active - late in 2019 or 2020.

Solar Cycle 25 Prediction Panel experts said Solar Cycle 25 may have a slow start, but is anticipated to peak with solar maximum occurring between 2023 and 2026, and a sunspot range of 95 to 130. This is well below the average number of sunspots, which typically ranges from 140 to 220 sunspots per solar cycle.

The panel has high confidence that the coming cycle should break the trend of weakening solar activity seen over the past four cycles.

This could give us a reprieve of sorts. Occasional-Cortex says we have less than twelve years to act; Beto, another global warming expert, says was have less then ten years.
Posted by Bruce Oksol at 5:50 PM No comments:

Later, 9:09 p.m. Central Time: a reader provides an excellent reply to the original post -- I'll bring it up here for each browsing/search capability:


Rigs matter eventually. Even if they have gotten better. Even if there is some DUC to work off.

I calculate we need about 40 rigs to maintain production.

DUCs are fine, but they are inventory. If you use them up, it's like draining your savings account. If can float you for a while. But eventually, you need to be bringing in as much income as you spend. So, when you look at long term sustainability, I would just ignore DUCs.

The way to do the calculation is explained by EIA and is pretty simple:

Looking at the EIA charts:

First panel (upper right) shows the new oil/rig is ~1400 bopd/month/rig. Next two panels directly below show the base decline is running about 67,000 bopd/month.

Doing the high school algebra and solving for rigs as the unknown:

Note, however, that when you lose rigs, you tend to pull the LESS capable rigs first (mechanically, crew experience, and more importantly rigs running in the less desirable areas like Divide, etc.). So there is always an effect of rigs getting more efficient as the numbers get lower.

It's like a class's average height getting larger, when you eliminate the shorter third of the students. You didn't actually make any students taller. But the average got higher because of cutting in a non-random manner.

So given all that, it would be something less than 48. I'm saying 40 as a guess, but it might be slightly higher or lower. Don't shoot me if it ends up being 45 or 35.

There is also another effect that takes place during downturns or plateaus. That is that the decline rate gets gentler as the percentage of new wells drops. (This happens during downturns or flat-turns, since less completions are done per month.) This has no immediate effect the first month of a big downturn, but over a year or two it can be substantial...it can lead to "less Red Queen" which means less rigs are needed just to fight shale decline. [The Rystad presentations on the video show this very nicely for the Permian...it's base decline went down from 2014 to 2016.] This also occurred in the Haynesville where 30 rigs were holding production flat (down from 200 at the peak, during growth).

Other effects that can happen over time include technology improvement (practice, efficiency, completion improvement, knowing where better land is), but they also fight depletion of the best rocks (look at EOG using up the Parshall). In any case, I think both of these effects are more long term and tend to offset each other.

Net/net: sure, dropping a rig or two is no big deal. But if we get into the 40s, we will be hurting for growth and in the 30s probably shrink.

When rig counts drop in North Dakota later this year, that will be a headline story for some. But rig counts are irrelevant. 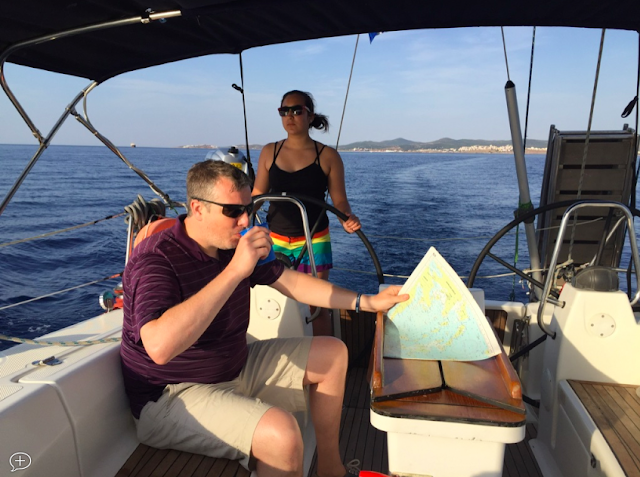 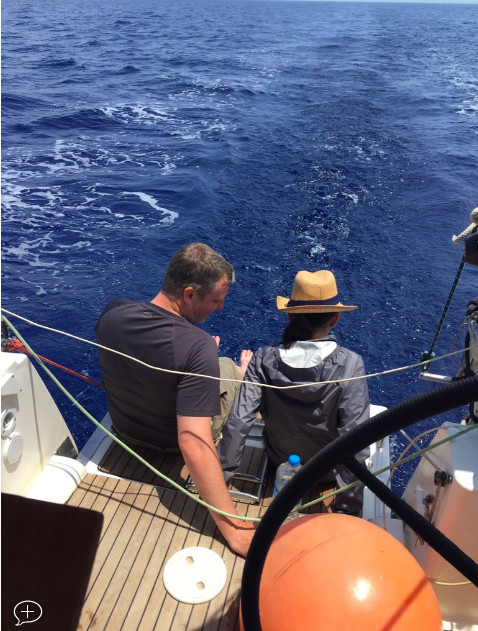 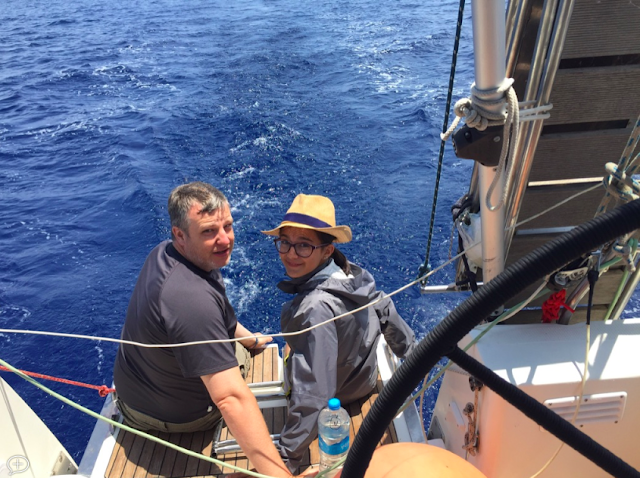 Crew:
Course:
The photos above were received on June 15, and the note written that day.

Arianna, 16, and Olivia, 13, just telephoned -- "Facetime" -- from the Aegean Sea. They are on a sailboat sailing among the Greek islands for the next seven days or so, sleeping on the boat at night. Their dad is the skipper, Arianna is the first mate, and Olivia is the narrator-videographer. They are the only three on the sailboat -- doing it on their own. This is the first time they have sailed as a team. Arianna and Olivia have taken sailing lessons but this is their first voyage on their own (with their dad -- also his first open water sailing adventure).

This is probably one of the better sites to get an idea of what they are doing, and a photo of the type of sailboat they are probably on.

#1 story not reported this week: the "Catherine Englebrecht IRS" story. Wikipedia has not yet noted the huge judgment against the IRS and for the "True the Vote" founder.  Via google one needs to go through about five pages before finding this story at CanadaFreePress.

Note: done quickly; links may be broken or wrong; will correct them as I find them.