Note: see comment about parallel horizontal wells running in opposite directions. (Note: these bumps in production may or may not move the needle for overall Bakken production, but they sure can make a difference in royalty checks. Good luck to all.)
Posted by Bruce Oksol at 8:24 PM No comments:

In addition to market action affecting my psyche (positive), north Texas is about to get hit with a huge winter storm, not sure how big it will be, but with a lot of driving tonight taking granddaughters to various venues, need to get away from the blog. I simply can't handle all this.

Good luck to all. With a 3-day weekend coming up, I'm looking forward to:
I'll post the NDIC daily activity report but that's it for awhile.

Baked in: since about mid-2017 the talking heads and their guests over at CNBC have consistently talked about three things: a) the synchronized global economy; b) the "fact" that share prices were "baked in" before the tax bill was passed (most, including me, did not even think the tax bill would pass); and, c) the 5% (or worse) correction that was "just around the corner."

NAFTA: yesterday, after several days of the Dow setting new records, the Dow dropped ... drum roll ... 17 points (0.07%) ... and Reuters suggested it was due to worries about NAFTA. I guess those worries dissipated overnight. The Dow surges again today, now up 100 points.

Coal: I have no dog in this fight, and I really don't care, but all things being equal, I did not care for Rick Perry's plan to "subsidize" the coal industry. However, when a Bloomberg writer calls that plan a "cockamamie" plan, I wonder how that Bloomberg writer would feel about the Strategic Petroleum Reserve. And the cotton reserve. And the helium reserve. And the tungsten reserve. Okay, I might have made up some of those reserves. [For the record: I think this is the first time I've used the word "cockamamie" in this blog.]


Lijla Villar, an analyst with the EIA's international energy team, said her agency also predicts a fall in production from Venezuela, along with OPEC's African members, which would temper any output increases from other members.

She added that there was "significant risk" that production could decline more than forecast in Nigeria and Libya, both of whom face constant threats of internal strife.

Libyan production averaged 980,000 b/d in December, according to the Platts OPEC survey. S&P Global Platts Analytics said Libya is unlikely to produce much more than 1 million b/d, "given technical and economic constraints, making production risks significantly greater to the downside."

Nigeria, meanwhile, has faced sporadic disruptions to its oil infrastructure that many analysts say likely will continue in 2018, particularly as a contentious general election approaches in February 2019.

"Niger Delta militias will align with rival politicians during the 2018 campaign season," Rapidan Energy said. "Attacks will focus mainly on political targets, but occasional disruptions of up to 100,000 b/d are possible."

Iran could be another downside risk, as US President Donald Trump on Friday is expected to decide whether to continue waiving sanctions on Iran's oil sector under the nuclear deal.

Analysts are divided on the prospects of Trump reimposing sanctions, which would likely take some time to implement and could be blunted by a lack of cooperation by European and Asian countries. But as much as 1 million b/d of Iranian crude exports could be impacted if the nuclear deal is scrapped.

Tesla: this is a great article from Bloomberg that brings us all up to date on Tesla's roll out of Model 3.

A Most Incredible Graph -- Global Warming Causes A Surge In Natural Gas Use -- January 11, 2018 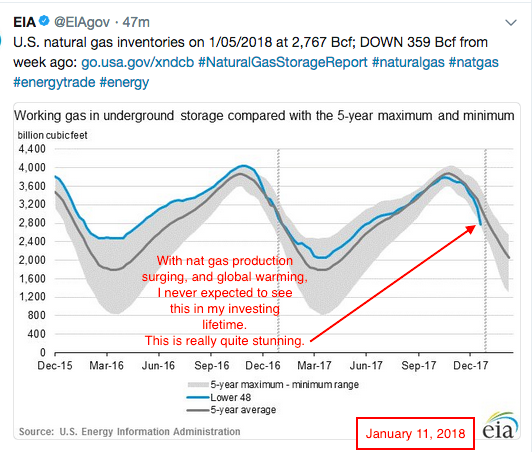 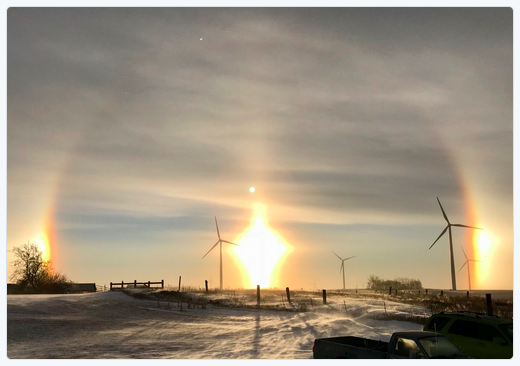 I first read about sun dogs when reading Shakespeare some years ago.

This page will not be updated; this well is tracked elsewhere; note this well is also an extended reach lateral, TD = 26,786 feet.
Note the large amount of proppant used on this well.
Posted by Bruce Oksol at 9:24 AM No comments:


Indian Oil Corp (IOC) today bought its third shipload or cargo of US crude oil as it looks at cheaper alternatives that have emerged due to the global supply glut.

IOC bought 2 million barrels of light Louisiana sweet crude oil in a tender today. The oil is for delivery at its Paradip refinery in Odisha during April 11-20.

IOC's Paradip refinery had in October last year received India's first ever shipment of US crude oil when it imported a 1.6 million barrels parcel. Prior to today's buying, IOC had placed a cumulative order of 3.9 million barrel of US crude. Sources said IOC had previously imported blend of two grades of crude oil but in today's tender it has bought the entire 2 million barrels of single grade crude oil.

Re-balancing: Saudi says oil markets will become balanced in 2018. Link here. Most recent data suggests re-balancing in the US should occur in about 24 weeks, mid- to late-2018.

Snookered? Oilprice notes it but does not address the issue -- why is API and EIA data so far apart? API seems to always be high; markets listen to EIA, not API. This week API reported a drawdown of 11 million bbls of US crude oil, and yet the official EIA figures showed the drawdown was just short of 5 million bbls.

Making America great again: specifically citing the Trump tax bill, Walmart uses lower US tax bill to raise minimum wage to $11/hour, plus $1,000-bonuses. Reuters is reporting: Walmart Stores Inc said on Thursday it would raise entry-level wages for hourly employees to $11 an hour as it benefits from the biggest overhaul of the U.S. tax code in 30 years.


The world’s largest retailer said the increase would take effect in February and that it would also expand maternity and parental leave benefits and offer a one-time cash bonus, based on length of service, of up to $1,000.

The pay increase and bonus will benefit more than 1 million U.S. hourly workers, it said.
Walmart’s announcement follows companies like AT&T Inc, Wells Fargo & Co and Boeing Co, which have all promised more pay for workers after the Republican-controlled U.S. Congress passed a tax bill last month that cut the corporate tax rate to 21 percent from 35 percent.


RBN Energy: could good times be coming soon for a resurgent Bakken? RBN Energy begins a series on the Bakken. Should be exciting. Articles will be archived. Best way to follow this story: monthly Legacy Fund deposits. See this post for an estimate of the Legacy Fund deposit for January, 2018.
Posted by Bruce Oksol at 7:18 AM No comments: